Accessibility links
Anthony Bourdain And Carla Hall Turbocharge D.C.'s Hunger Fighters : The Salt Celebrity chefs haven't just made us aware of the latest noshing fashions; they have also spread the word about anti-hunger initiatives like those at the innovative DC Central Kitchen. 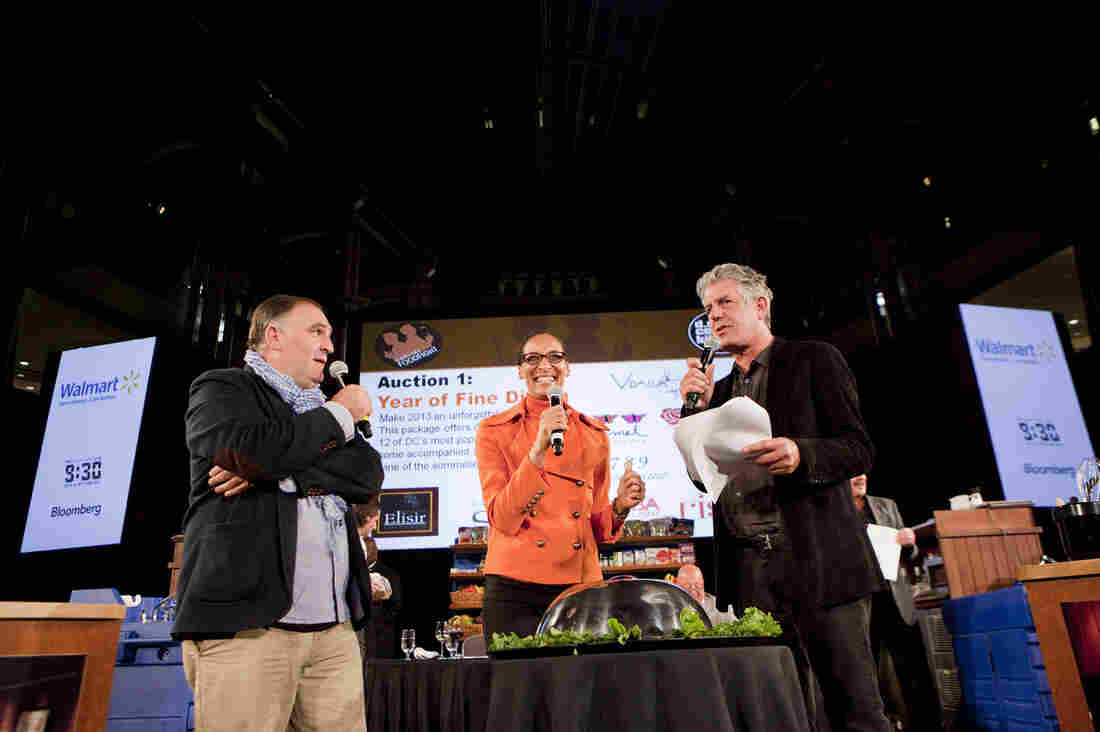 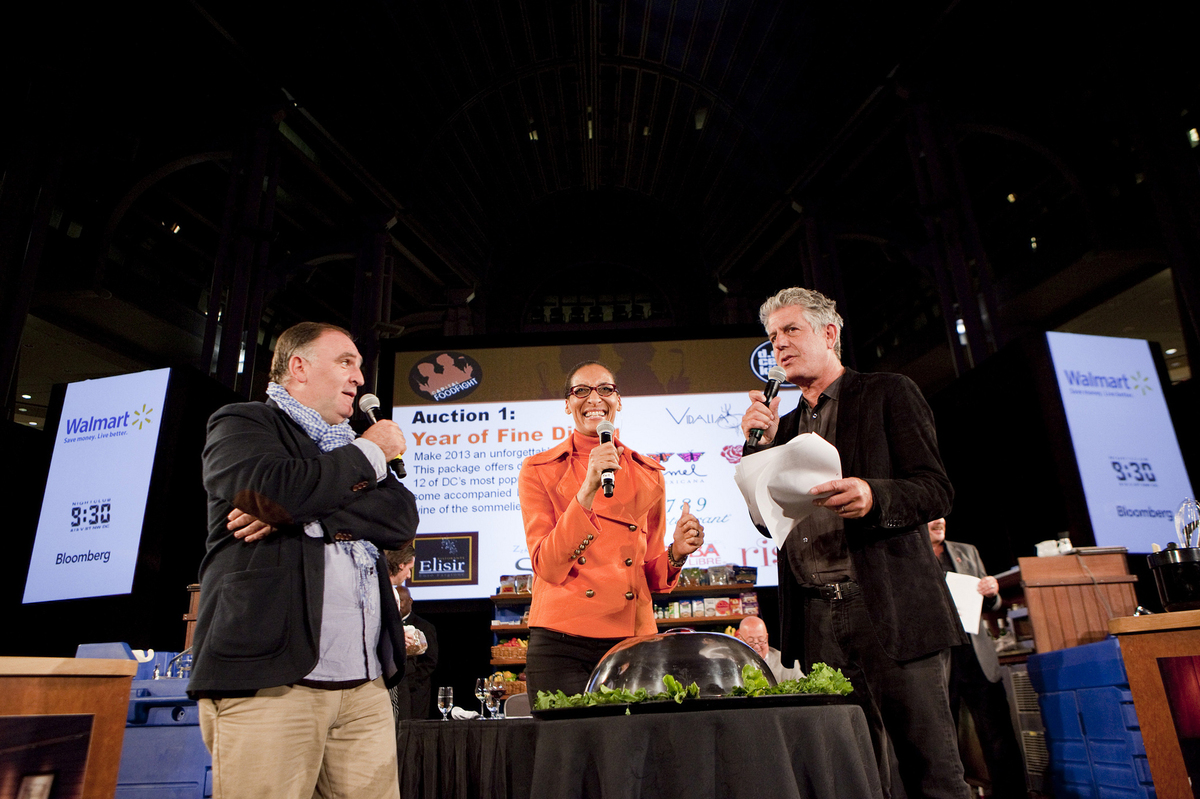 Celebrity chefs (from left) Jose Andres, Carla Hall and Anthony Bourdain rev up the crowd at last year's Capital Food Fight fundraising event for DC Central Kitchen. The nonprofit's fortunes have risen alongside those of its celebrity chef fans.

If you're like me — I binged on an entire season of Parts Unknown during a single weekend — then you get the pull of globetrotting foodie Anthony Bourdain.

Whether he's sharing secret recipes from Iran or pulling the veil back on the tradition of Vietnamese spirit houses, Bourdain stokes our wanderlust and curiosity and lets us dive in with him as he explores.

"Tony Bourdain has a cult following," says Mike Curtin, the CEO of DC Central Kitchen. "People want to be near Tony; they want to hear him."

And those groupies who happen to be in the nation's capital Tuesday night will have their chance.

Bourdain is set to step onstage as host of Capital Food Fight, the annual fundraising event for DC Central Kitchen, a hunger nonprofit whose innovative model has been copied nationwide. He'll be flanked by other A-list food personalities, including Carla Hall of ABC's The Chew, Ted Allen of Food Network's Chopped and David Guas of Travel Channel's American Grilled.

All proceeds go toward DC Central Kitchen's efforts to combat hunger and poverty. This year's event is expected to bring in upwards of $700,000, says Curtin. Compare that with 10 years ago, when the event raised just over $150,000.

Indeed, the nonprofit's fortunes have risen alongside those of its celebrity-chef fans. "We [have been] positioned in an incredible way to ride that [celebrity-chef] wave," Curtin tells us. One could say the Kitchen was built on the backs of chefs and restaurateurs.

Chefs were the first people to buy in to DC Central Kitchen's idea to use surplus food from restaurants and other sources to feed the poor. And local chefs have embraced the organization's trailblazing efforts to train homeless people — some of whom are former drug addicts — in the culinary arts so that they can get jobs in the industry.

"Tony [Bourdain] got involved through [local DC chef] Jose Andres," explains Curtin. Bourdain — who has been open about his battle with addiction — "found a strong connection to the work we do, so he's committed."

The event itself tends to get a little wild — not unlike Bourdain himself. Staged as an Iron Chef-style cooking competition, Capital Food Fight has been described as epic. This year, four pastry chefs will compete.

The vibe of the event? Saucy and irreverent. This is not a society-lady tea. In 2012, according to Eater, Bourdain, in an attempt to get bids on one of the items being auctioned off, promised, "You get Mario Batali to sing 'Tiny Dancer' to you in a falsetto while wearing a Speedo." In other words, there's a lot of trash talk involved.

"It's amazing to see how the event has grown from a mild-mannered tasting event to [more of a] rock concert [that has] frenzied groupies around the stage," Curtin says.