Accessibility links
Golden State Joe: California Makes A Play For Coffee's Future : The Salt California's coffee crop is new and small, but farmers are optimistic about its potential. Scientists hope that by growing coffee here they can learn more about how to help the crop resist disease. 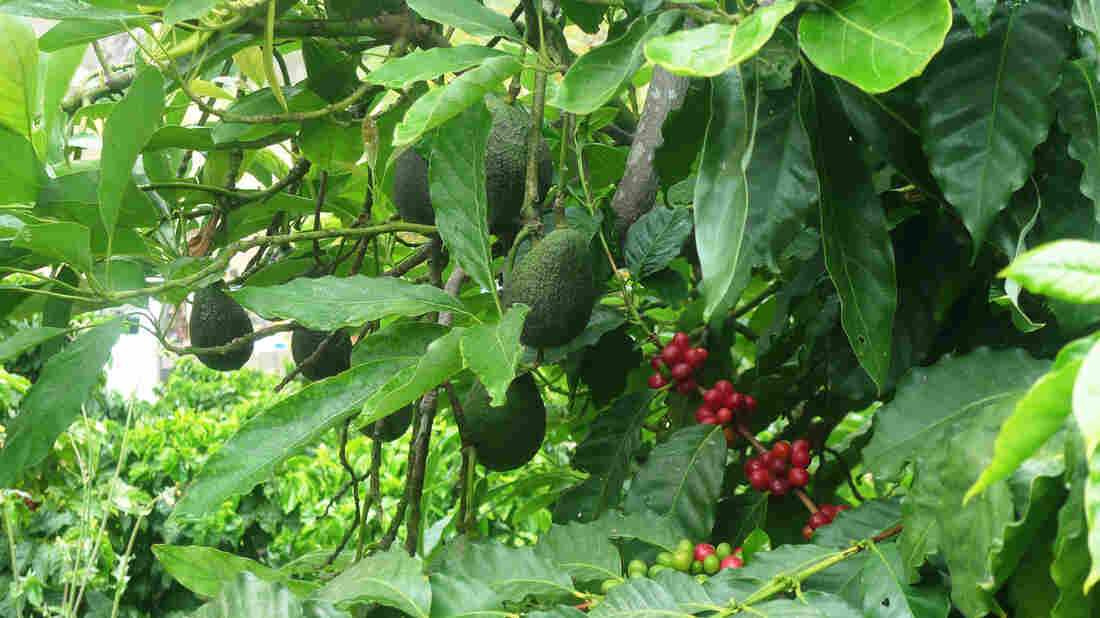 Jay Ruskey grows coffee next to avocados on his farm, Good Land Organics, in Goleta, Calif. The two crops are often grown together in Central America, partly because they can share fertilizer and water. Lisa Morehouse/KQED hide caption 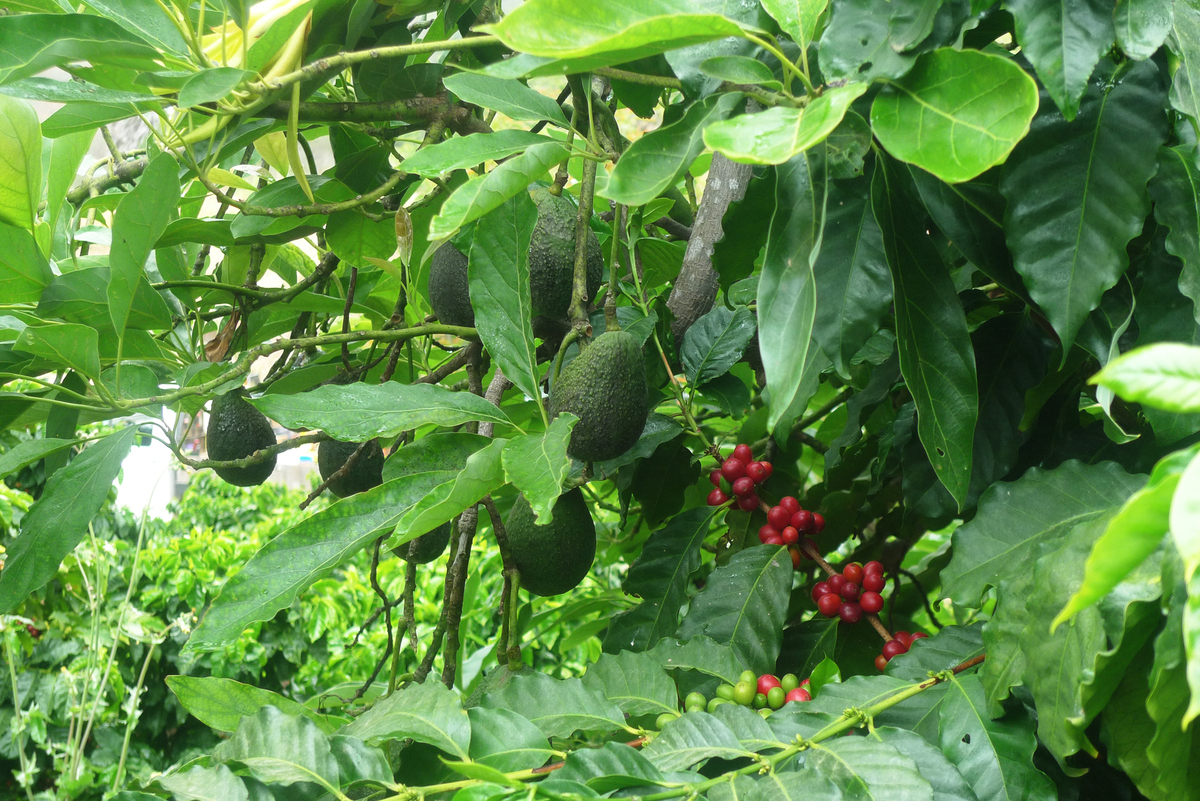 Jay Ruskey grows coffee next to avocados on his farm, Good Land Organics, in Goleta, Calif. The two crops are often grown together in Central America, partly because they can share fertilizer and water.

Coffee has been grown since at least the 13th century in places such as Indonesia, Ethiopia and Central and South America. Though it's not a traditional region for growing coffee, California is playing an increasingly big role in the future of this beloved and lucrative crop.

Sammy Venegas stands on a hillside in Goleta, Calif., outside Santa Barbara, that's shrouded in fog, thick with avocado trees, passion fruit and coffee plants. With a white bucket slung around his neck like a baby carrier, he picks only the reddest coffee beans.

"The redder the bean, the better the flavor," Venegas explains in Spanish.

Venegas' whole family plants and harvests coffee in Oaxaca, but he's not in Mexico. 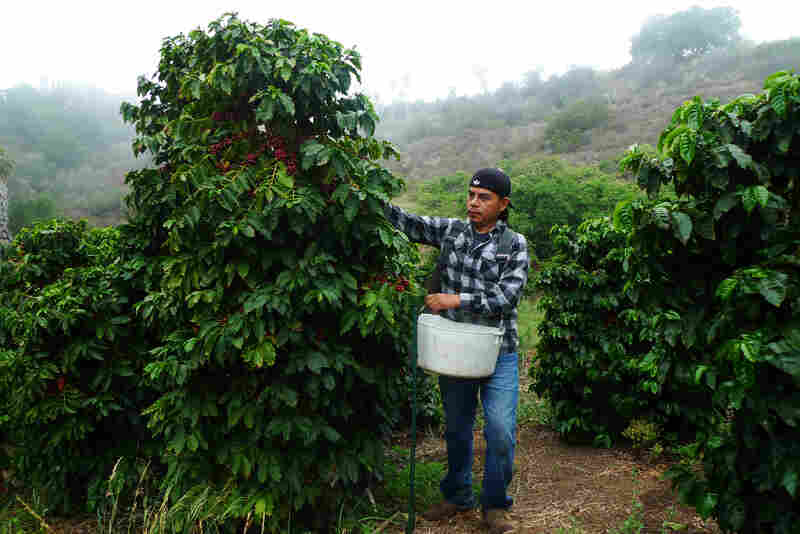 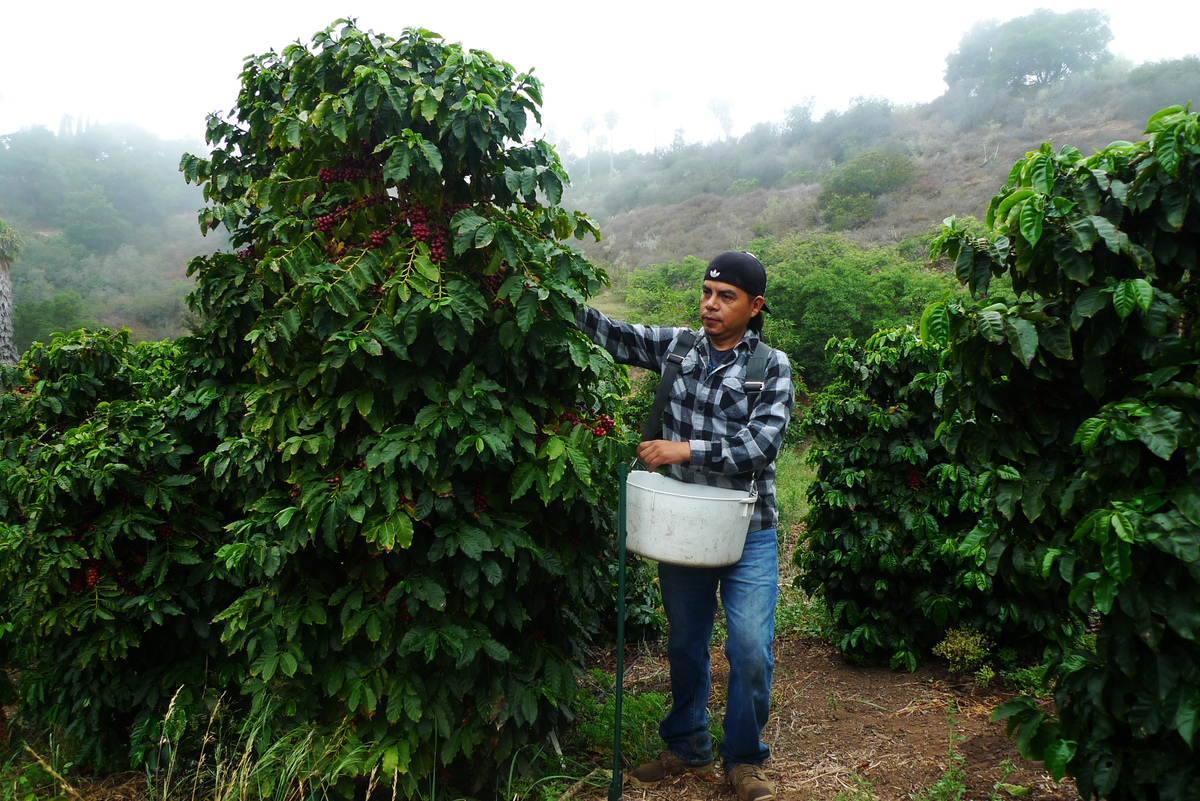 Sammy Venegas leads a crew of workers harvesting coffee at Good Land Organics. He comes from a long line of Oaxacan coffee growers and harvesters.

"I call my family and tell them I'm working at a coffee ranch in California and they are like, 'Seriously?' " Venegas says, with a laugh. "I say, 'Yes. It's incredible.' "

The farm belongs to Jay Ruskey of Good Land Organics, a producer with a passion for experimenting with new crops he believes have market potential. Five years ago, University of California Cooperative Extension helped him plant coffee, and this year his small crew is harvesting several coffee varieties never before grown here. That makes him the first known farmer to make a real go at growing coffee commercially in the continental U.S.

In a processing shed, Ruskey puts beans through a depulper to separate out the skin, then into a fermentation tub for a day or two. After the beans dry, he weighs 100 of each variety to compare their yield.

Let's be clear: Santa Barbara is a far cry from the tropics, where the world's most respected coffee is grown. But Ruskey is an experimental farmer, like a long line of Californians. Since the late 1800s, agricultural explorers have roamed the world and brought back crops that ultimately did succeed here — avocados came from Mexico and Guatemala, dates from Morocco and navel oranges from Brazil.

Ruskey is not the only one doing coffee research in California, however. There's also Juan Medrano, a professor in the School of Animal Science at the University of California, Davis who has traditionally focused on milk genetics.

"But lately, I have developed another interest, which is also looking at the genetics of coffee," Medrano says. "If you think about it, milk and coffee are traditional companions, and they make a really good latte."

In Medrano's lab, staff researcher Alma Esles studies the genetics of Panamanian beans that Medrano collected at different altitudes, creating a library of information about how altitude impacts the flavor, aroma and mouthfeel of coffee.

Eventually, they'll study the beans grown on Ruskey's farm. "We're interested in looking at diversity, and Jay has quite a collection of different varieties," Medrano says.

Medrano is part of a new coffee center at UC Davis that is bringing together people who study food science, genetics, marketing and the social aspects of coffee. Despite coffee's status as the second most widely traded commodity in the world, there hasn't been much scientific research devoted to it anywhere.

"Hundreds of millions of peoples' livelihoods depend on coffee," Medrano explains. Additionally, the coffee crop is confronting some serious threats — mainly climate change, disease and quality. 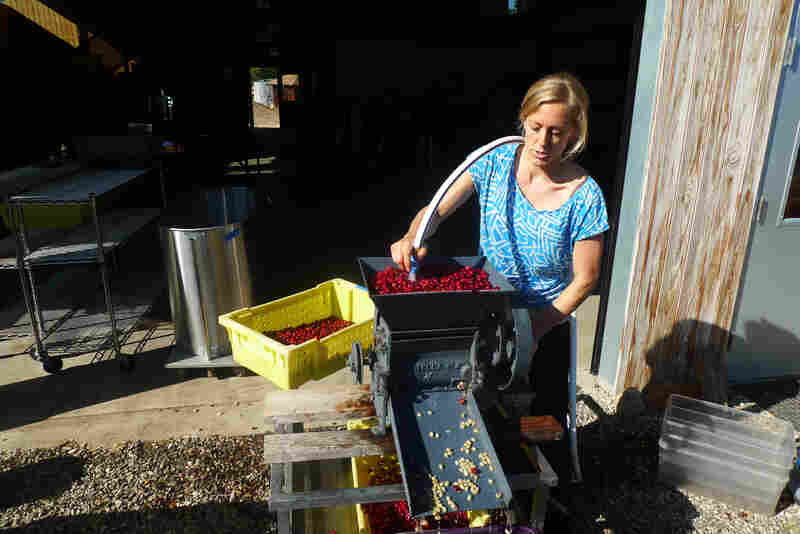 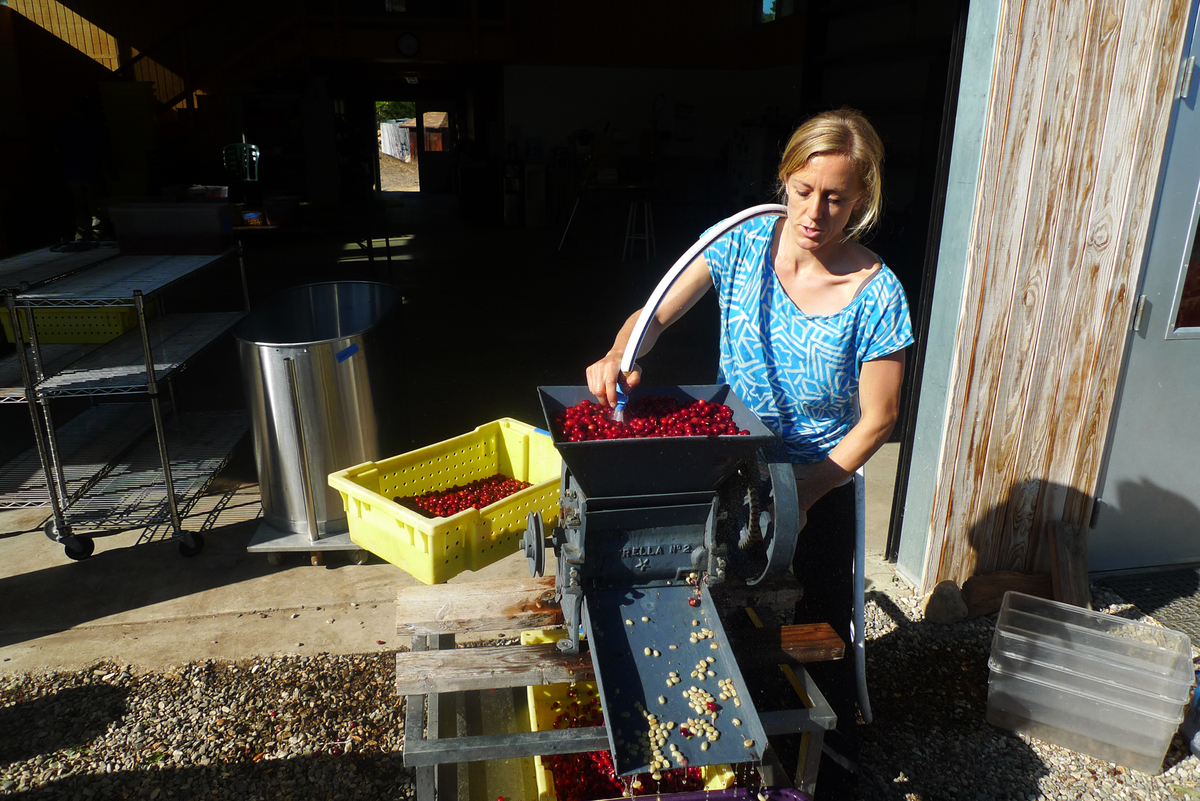 He says California's coffee crop is so new and small, it wouldn't really impact the worldwide coffee trade, but by growing it here, scientists can learn about disease resistance. And farmers like Ruskey can determine whether great coffee can grow outside more traditional coffee environments.

Ohannes Karaoghlanian and Joanne Robles Swanson both grow avocados in Temecula, a California town southeast of Los Angeles. They take the bumpy truck ride to visit Ruskey's farm, where coffee is growing next to and under avocado plants.

Coffee and avocados grow together in parts of Central America, and this pairing might make sense here, especially given the state's scant water supply.

"If they could coexist, use the same fertilizer, use the same amount of water — maybe just a little bit more — then it makes sense to put these crops together," says Robles Swanson.

Right now, Ruskey is getting the best price for his beans in Europe and Japan. He's selling coffee plant starts from his greenhouse to other California farmers, and will process their beans after harvest.

This may happen soon: Ruskey is already working with farmers in Morro Bay and San Diego County.

Vickie Ly and Lisa Morehouse are independent journalists based in California. This story is part of California Foodways, a series exploring the intersection of food, history, culture and economy, funded in part by Cal Humanities. A version of this story previously appeared on KQED.org.