Accessibility links
Why The 'Invasivores' Haven't Pounced On Bear Meat : The Salt Bear is traditional American grub, and hunting bear for meat can help control overpopulation. But bear meat isn't going to make its way into restaurants or onto the average dinner table anytime soon. 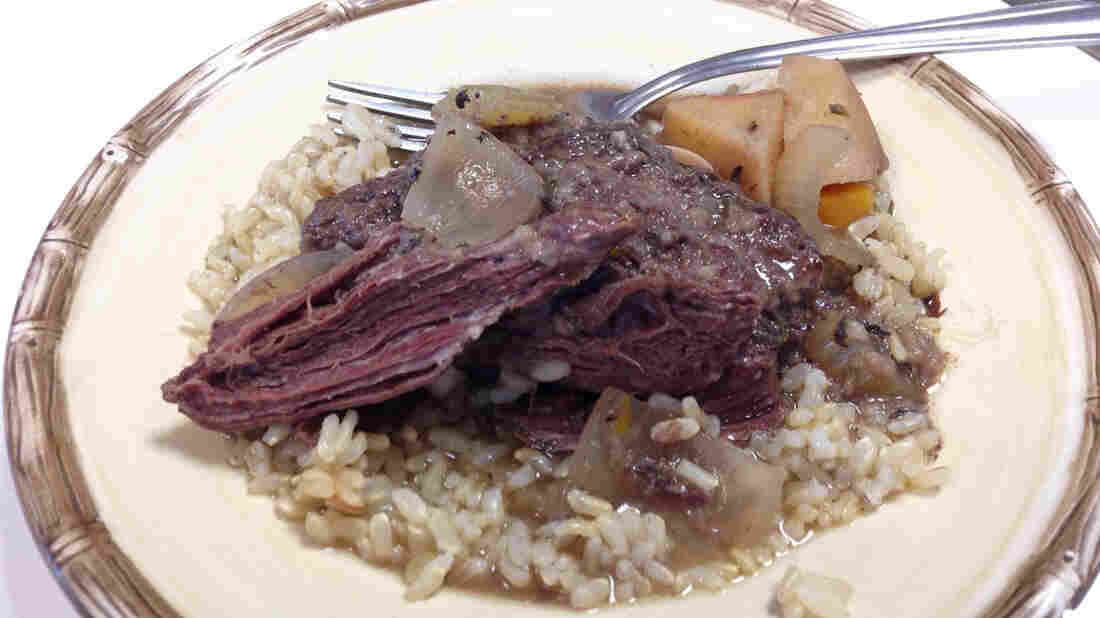 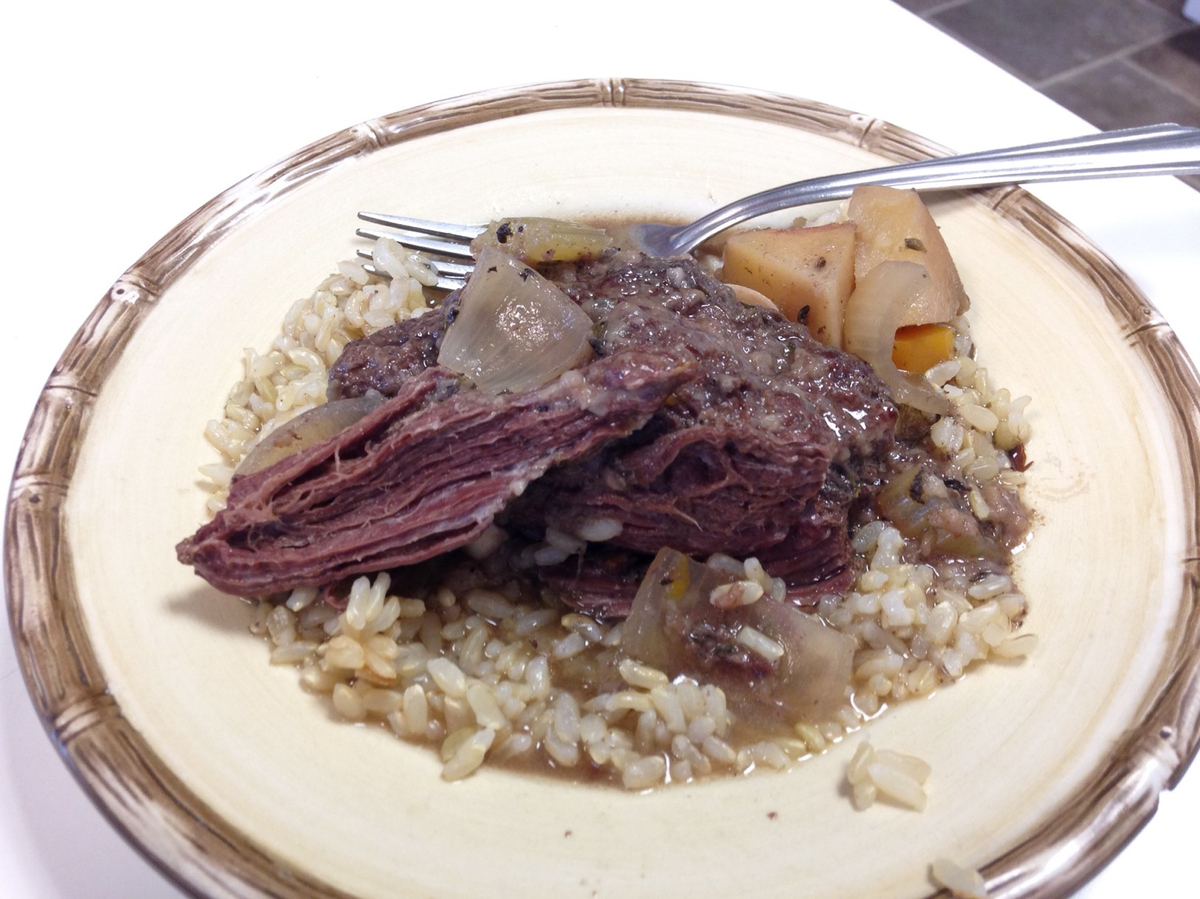 Slow-cooked New York bear meat has been described as like beef stew, but with "a little stronger texture and a little gamier flavor."

The fight against nuisance critters is increasingly being fought at the dinner table. We've reported on so-called invasivores eating everything from Asian carp (battered and fried!) to wild pigs (Russian boar carpaccio, anyone?) as a means of reducing pesky populations. Heck, invasivores are even getting stoked on squirrel.

Bears are not an invasive species, but populations of black bear in particular are spiraling upwards in many parts of the northern half of the U.S., as roads, homes and camping spots infringe on bear territory. And bear is a traditional American food: Native tribes, frontiersmen and settlers ate it for hundreds of years in North America. Yet bear lags way behind other wild game as a desirable meat for the plate.

Bears have been caught raiding a candy store in the Adirondack mountains of Upstate New York, wandering through a Chicago suburb, and munching on corn fields from Wisconsin to Pennsylvania.

New Jersey recorded its first fatal attack last September, when a black bear mauled a Rutgers student who was hiking with friends in the northern part of the state. 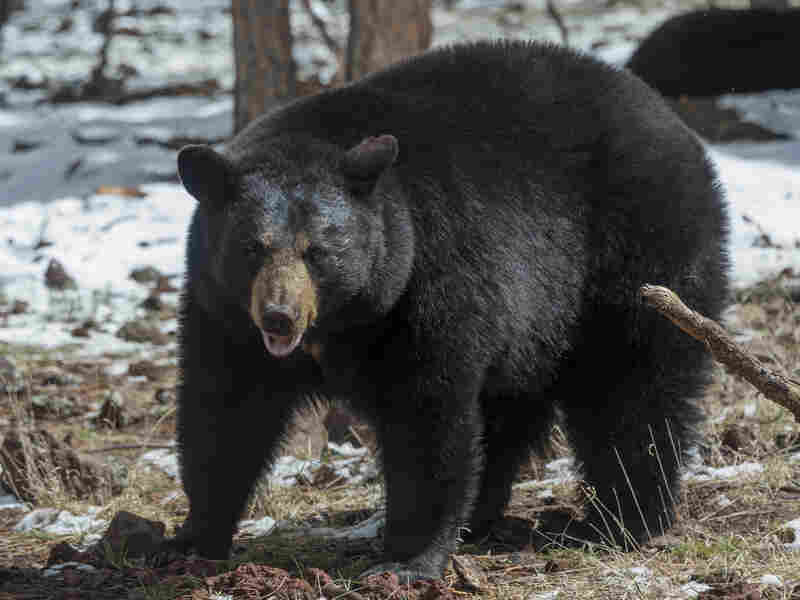 Populations of black bear in particular are spiraling upwards in many parts of the northern half of the U.S., as roads, homes and camping spots infringe on bear territory. iStockphoto hide caption

Some 29 states have regulated bear hunts to keep the animals at bay. New York expanded its season this year to include some places that hadn't seen a bear hunt since the 1950s. Heerkens says the goal was to keep bears out of suburban Buffalo, Rochester and Syracuse. "When bears do get into those high density areas, they do cause a lot of problems."

Heerkens says well-managed hunts are proving to be a very effective control. And most of those hunters eat the meat, in addition to saving the animals' hides and skulls.

He and other wildlife experts encourage more people who hunt for deer every year to branch out into bear. But that doesn't mean he's advocating "eat bears to beat them." Hunting bears, after all, is pretty dangerous if you don't know what you're doing.

Still, it wasn't hard to get my hands on bear here in Canton, N.Y. Turned out my colleague had a packet in the freezer, gifted to her by a hunter a few years back.

She wasn't dying to invite the neighbors over for some bear stew. But I was.

When I thawed them in their paper-wrapped package, the bear chunks were lean and deep maroon, almost like liver. 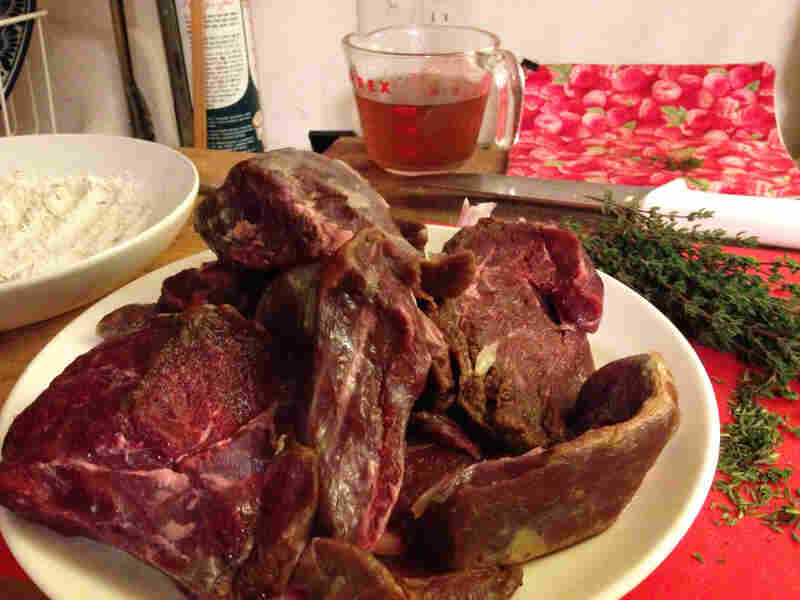 The author had no trouble sourcing bear meat in upstate New York; a colleague had some in her freezer. David Sommerstein /North Country Public Radio hide caption

I seared them in oil that night, then tossed them in a slow cooker with onion, carrots, celery, beef broth and red wine, and went to bed.

You can find dozens of venison recipes online; even celebrity chef Emeril Lagasse has a venison chili. Yet bear hasn't spread far beyond hunter circles.

The meat has a reputation for being tough and greasy. But Shaw says that's just because people aren't cooking it right. "From a cook's perspective, black bear is like beef wearing a hat made of pork fat."

But Shaw says there are other big reasons bear isn't going to make its way to America's fine restaurants, or to the average dinner table, anytime soon.

Hunters aren't allowed to sell bear. It's against federal law to resell bear hunted in the wild to stores or restaurants.

Supply is tight because no one is domesticating bear. This may sound obvious, but while deer, boar, buffalo, and other animals can be penned and farmed for their meat, bear "have always only been a hunted meat," says Shaw.

Flavor Russian roulette. Bears are omnivores, so their meat tends to taste like their last meal. That's fine if they last dined on berries. But if they've been eating, say, salmon, their fat will become infused with fishy flavor. "When you cook it," Shaw says, "it's going to be like low tide on a hot day." Ick.

Bear meat can make you very sick. As omnivores, bears often carry the larvae of a nasty parasite, Trichina spiralis. Eating undercooked bear meat can cause trichinosis, which can cause severe sickness or even death in humans. That's why bear is most often cooked in stews, chilis, braises, or in well-cooked sausage. Skip the medium-rare bear steak.

Teddy Roosevelt. Bears were a pretty conventional food, Shaw says, until the early 1900s, when the president was, ironically, on a bear hunt and refused to shoot a bear tied to a willow tree. A toy company marketed a stuffed bear to commemorate the incident. "The whole Teddy bear thing was the Bambi moment for bears," Shaw says.

Animal rights groups like the Animal Protection League have opposed the expansion of the bear hunt, saying humans should change their own behavior. The reintroduction of bear hunting in New Jersey in 2010 was one of the state's most controversial actions, "right up there with the response to Hurricane Sandy," says state spokesman Larry Ragonese.

After a night simmering slow cooker, the bear meat imparted my house with a warm, smoky, delicious aroma. I brought the bear stew into work with a side of rice.

Our web manager, Dale Hobson, tried it first. He immediately declared it "man chow" – like beef stew, but with "a little stronger texture and a little gamier flavor."

Reporter Sarah Harris said if I hadn't told her, she'd have had no inkling what it was. "It's definitely game. But I don't think I would know it was bear. It's good."

The meat came out ropey, like a pot roast, pulled pork or the classic Cuban shredded beef dish, ropa vieja.

If I had to do it all over again, I'd slow cook it with Mexican spices and less broth, then pull it apart and serve with tortillas and shredded vegetables.

David Sommerstein is a reporter and farm and food blogger for North Country Public Radio in Canton, N.Y.