Accessibility links
To End Food Waste, Change Needs To Begin At Home : The Salt The U.S. throws out 35 million tons of food each year. While many restaurants, supermarkets and processors are taking responsibility, many consumers aren't. An EPA pilot program aims to change that. 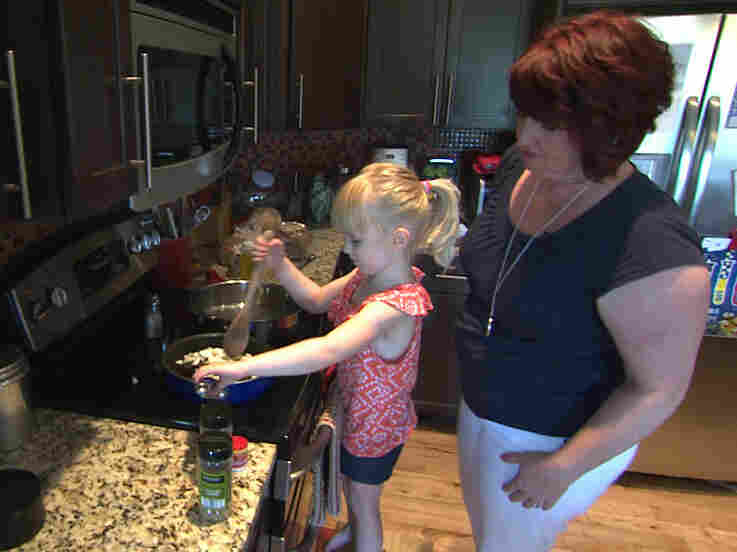 Sherri Erkel and her daughter, Asa, cook dinner in their kitchen in Iowa City, Iowa. The Erkel family is part of an EPA study measuring the amount of food wasted in U.S. homes. Pat Aylward/NET News hide caption 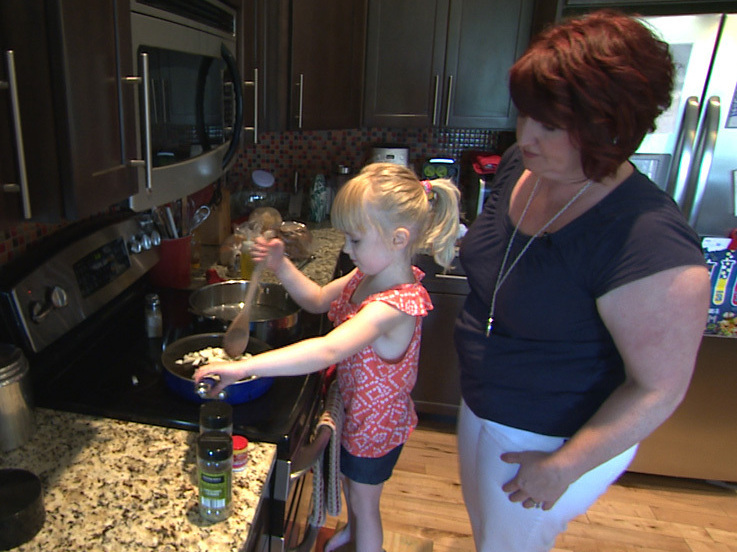 Sherri Erkel and her daughter, Asa, cook dinner in their kitchen in Iowa City, Iowa. The Erkel family is part of an EPA study measuring the amount of food wasted in U.S. homes.

It's a hot summer day outside Lincoln, Neb., and Jack Chappelle is knee-deep in trash. He's wading in to rotting vegetables, half-eaten burgers and tater tots. Lots of tater tots.

"You can get a lot of tater tots out of schools," Chappelle says. "It doesn't matter if it's elementary, middle school or high school. Tater tots. Bar none."

Chappelle is a solid waste consultant with Engineering Solutions & Design in Kansas City, Kan. Local governments hire his crew to literally sort through their garbage and find out what it's made of. On this day, he's trudging through Lincoln's Bluff Road Landfill.

"In the country you get more peelings," Chappelle explained. "You get more vegetables."

A lot of the waste he finds is food — from homes, restaurants, stores and schools.

"When you're in the city, you get a lot more fast-food containers with half-eaten food in them," Chappelle says. "A lot more pizza boxes."

Food is the largest single source of waste in the U.S. More food ends up in landfills than plastic or paper.

According to the U.S. Environmental Protection Agency, 20 percent of what goes into municipal landfills is food. Food waste tipped the scale at 35 million tons in 2012, the most recent year for which estimates are available.

Supermarkets Waste Tons Of Food As They Woo Shoppers

The enormous amount of wasted food is weighing on our food system.

"Forty percent of all the food in this country never makes it to the table — at a cost of $165 billion to the U.S. economy," says Dan Nickey, associate director of the Iowa Waste Reduction Center, which works with businesses to cut back on how much food goes into the garbage.

There are lots of reasons for food waste. Some crops are never harvested. Some foods are thrown out if they don't meet cosmetic standards. Restaurants often prepare more food than they sell. And grocery stores pull food off the shelf when it starts going stale.

Still, Nickey says, part of the problem is that consumers can afford to waste.

It's a big problem, and Nickey tries to be realistic about solving it.

To reduce the food heading to landfills, food companies, grocery stores and restaurants will have to take some responsibility. And many are. But many of us — American consumers — are not.

"Forty to 50 percent of food waste comes from consumers, and 50 to 60 percent from businesses," says the EPA's Ashley Zanolli. She helped create a new program to teach consumers to be more efficient in the kitchen. It's called Food: Too Good to Waste. Until it's rolled out nationwide, a handful of cities are trying it out — including Iowa City, Iowa.

That's where Sherri Erkel's family is part of a study measuring how much food people throw out at home.

It's fajita night at the Erkel home, and some half-eaten tortillas, picked over beans — all the scraps — are going into a green bucket on the kitchen counter. Once a week, Erkel pulls out the plastic liner to weigh what they've thrown out.

"We're at 4 pounds of food waste for a couple days," she says. "These aren't watermelon rinds or anything, so that's just food on our plate we didn't eat."

The EPA's Zanolli says until they measure what they're wasting, people often fault others for tossing out food.

"It's their brother-in-law who wastes so much food, or, oh, my gosh, their neighbor down the street," she says of consumer attitudes. "And unlike recycling, where you can create some peer pressure by noticing whether your neighbor has their blue bin down at the end of the driveway, it's a little different with household behaviors."

To put less food in her green bucket, Sherri Erkel is following tips from the EPA.

For starters, she plans her meals for the week and puts them on a calendar. And she uses that menu to make her shopping list. One tip suggests dedicating a shelf in the fridge for food that needs to be eaten before spoiling. It boils down to buying what you need and eating what you buy.

Saving money is part of Erkel's motivation, but so, too, is guilt: 1 in 7 families in the U.S. struggles with hunger.

"Food production is not an issue," Erkel notes. "Like, we produce enough food, but we're throwing away all this food, and a mile away, people don't have enough. So that's kind of the first step, I think."

A step, she says, toward taking personal responsibility not only for what's eaten, but also for what's wasted.

This story is part of a series on food waste from Harvest Public Media, a public radio reporting project focusing on agriculture and food production.