Accessibility links
Soda Companies Step Up Their Marketing To Black And Latino Kids : The Salt Black youth saw more than twice as many ads for sugary drinks on TV compared with white children and teens in 2013. Advertising for the drinks on Spanish-language TV also increased by 44 percent. 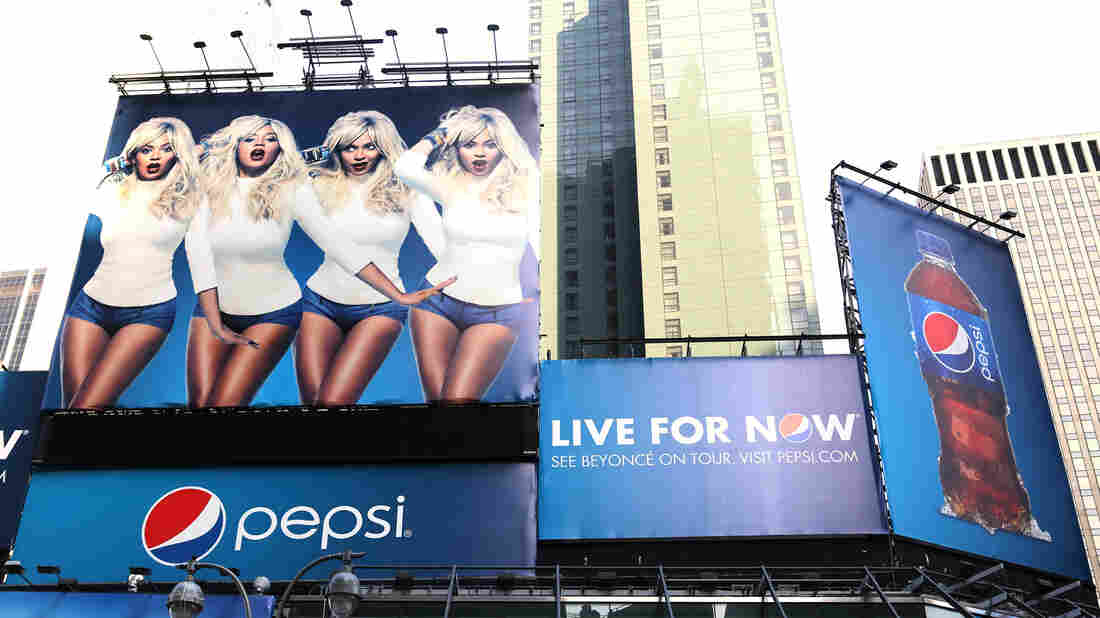 When beverage companies like Pepsi create ad campaigns with stars like Beyonce, they're trying to appeal to youth, says Jennifer Harris of the Rudd Center for Food Policy & Obesity. Walter McBride/Corbis hide caption 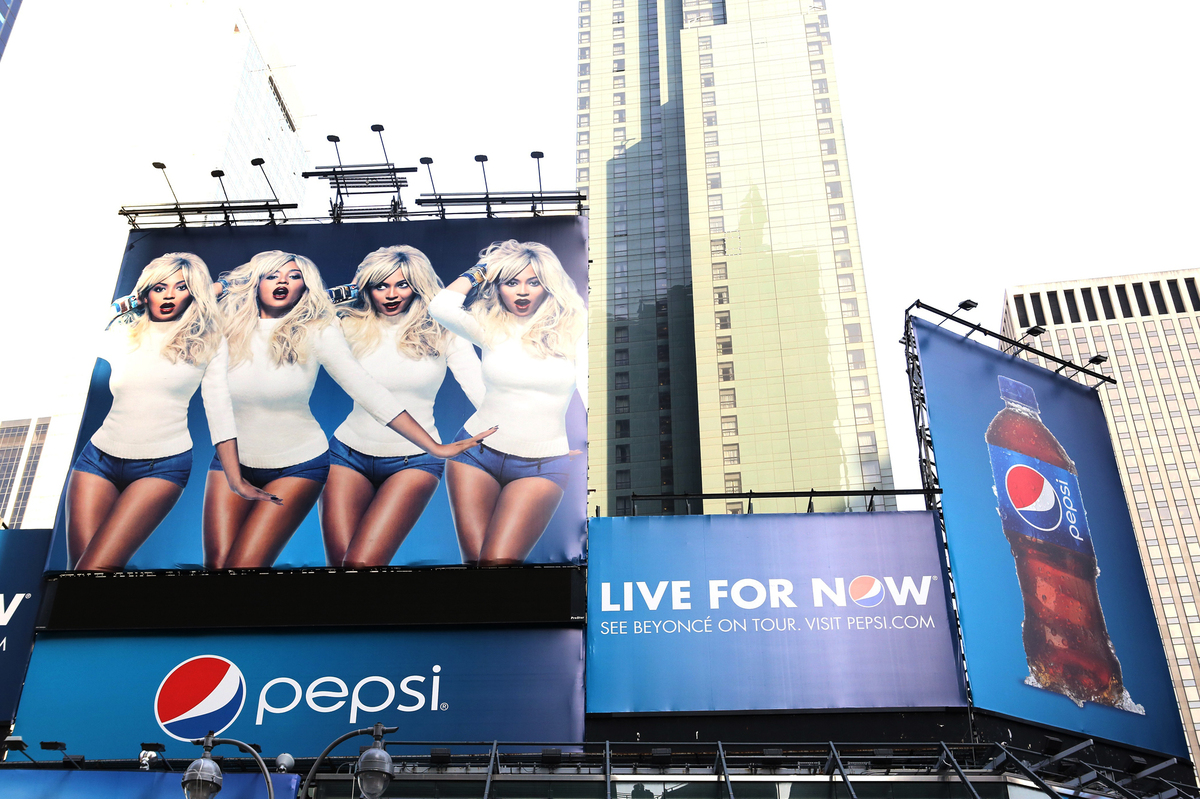 When beverage companies like Pepsi create ad campaigns with stars like Beyonce, they're trying to appeal to youth, says Jennifer Harris of the Rudd Center for Food Policy & Obesity.

While beverage companies have cut their marketing of unhealthy drinks to children on TV and websites overall, they have ramped up marketing to black and Latino kids and teens, who have higher rates of obesity than white youth, a study finds.

The report, released Wednesday by the Rudd Center for Food Policy & Obesity at Yale University, updates a 2011 report on the nutritional content of sugar-sweetened drinks including sodas, fruit drinks, flavored waters, sports drinks and iced teas.

This ad for Pepsi aired in April on the Spanish-language network Univision.

It shows how 23 different beverage companies market these drinks to kids through an analysis of advertising spending, as well as kids' exposure to advertising on TV, websites, social media and mobile apps. 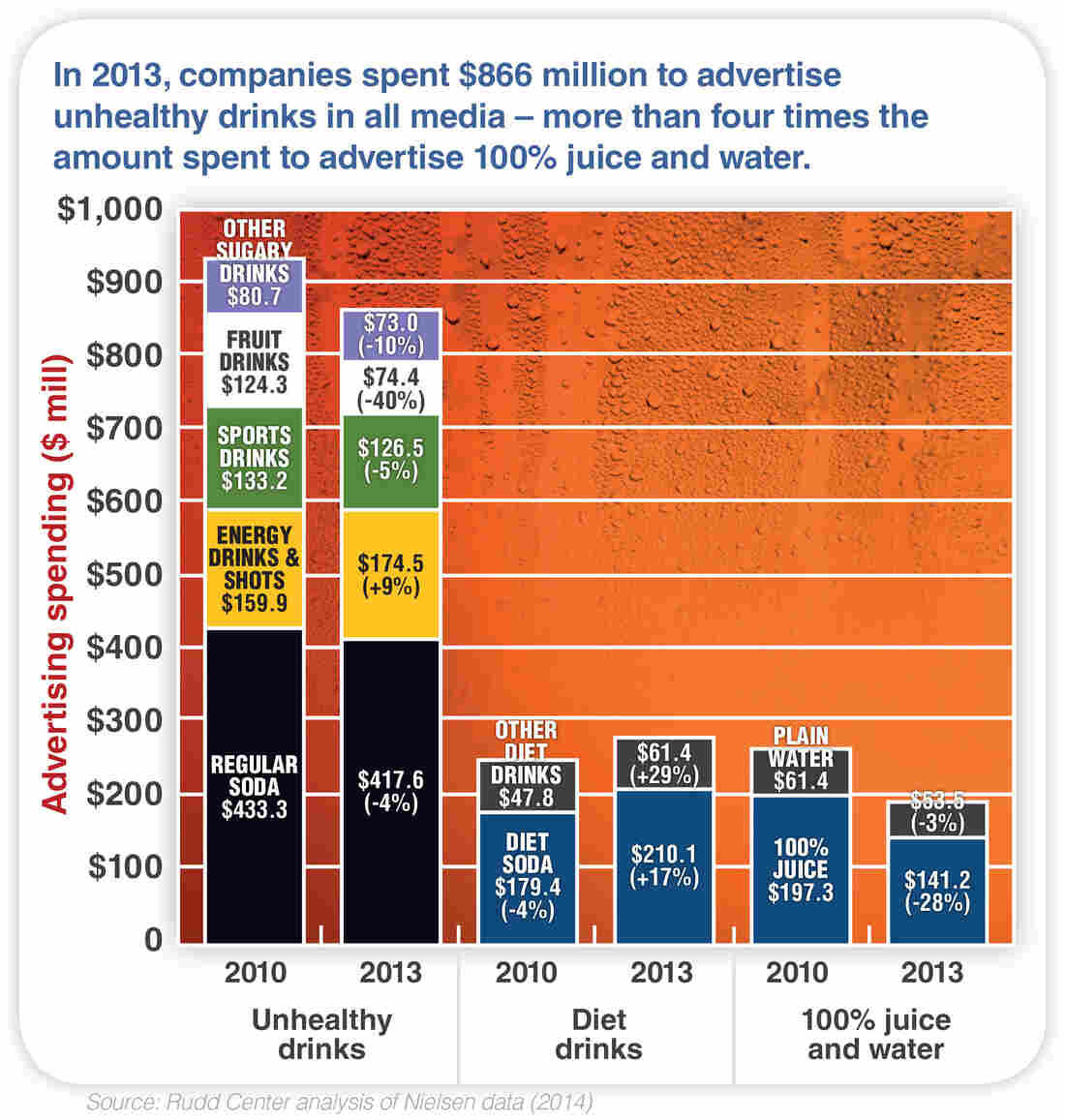 "[Black and Latino] populations suffer more from diabetes, obesity and other negative health consequences from the consumption of sugary beverages; it's a huge problem in those communities," Jennifer Harris, director of marketing initiatives at the Yale Rudd Center and lead author of the report, tells The Salt. "These companies all say they have practices for responsible marketing to children in black and Latino communities, but it's not very responsible to be marketing products that are so detrimental to them. We are really hoping to get companies to pay attention not just to the market opportunities, but also the public health consequences of what they're doing."

According to Harris, there are a few reasons beverage companies are so keen to entice these groups.

"Latino consumers are a huge and growing market, and so to grow their business, the companies feel like they have to go after that audience," Harris says. (Coca-Cola, for one, has said it estimates that 86 percent of its growth through 2020 will come from multicultural youth.)

"Also, black and Latino kids drink more sugar-sweetened drinks, so it is an important market for the companies," Harris says. What's more, "these companies are talking about crossover appeal. So if they create a campaign with Pitbull or Nikki Minaj or Beyonce, they're appealing to important minority youth consumers, while also making products seem more cool for all youth."

In addition to television and Web advertising, the study notes that many companies have developed child-friendly mobile "advergame" apps such as Fanta Fruit Slam, Fanta Fun Tap and Snapple Spiny Lobsters in Snaplantis. This type of advertising, Harris notes, is harder than TV for parents to monitor.

But while the marketing to Latino and black youth may continue to increase, Harris notes that health advocacy groups are increasingly fighting back. And there is research underway at the National Institutes of Health looking at how to increase intake of tap water in lieu of sugar-sweetened beverages among Latino kids and adolescents.