Accessibility links
For The Next Food Drive, Go For The Canned Tuna, Not The Saltines : The Salt If you're giving nonperishables to a food pantry this year, skip the sodium-packed soups and focus on nutrient-dense foods, hunger advocates say. Some of them may be cheaper, too. 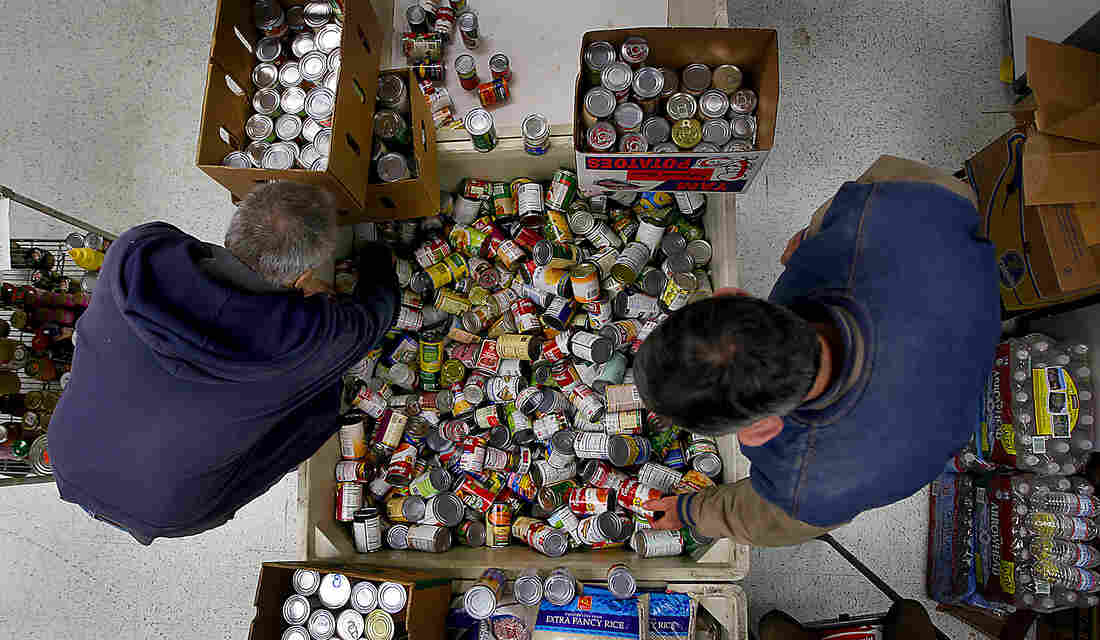 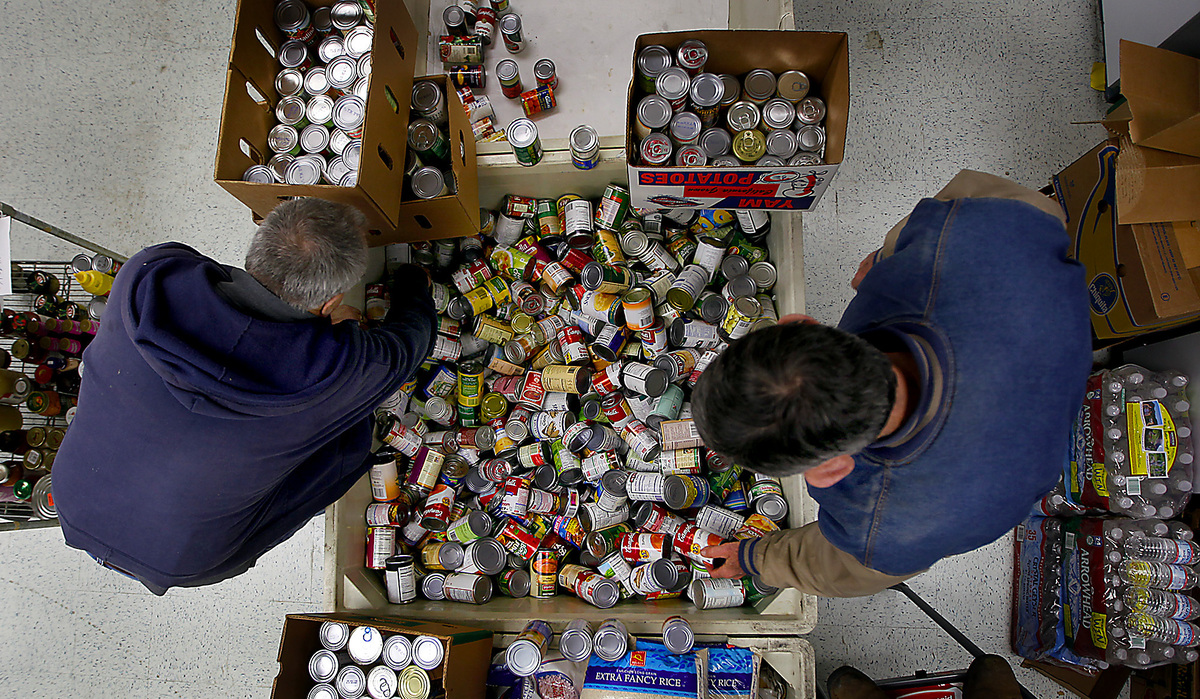 John Umland (left) and John Torrens gather donated cans of food in 2011 in Rohnert Park, Calif., for the group Neighbors Organized Against Hunger. Hunger advocates say a lot of nutritionally dense food like canned tuna and beans can be cheaper than processed food.

When you donate to a food drive, do you ponder the nutritional labels of the can in your hand? Or do you grab a packet of ramen or a bag of marshmallows from the dark corners of your pantry and hope it hasn't expired?

Healthfulness isn't typically a well-intended food donor's top concern, says hunger advocate Ruthi Solari. The ramen and marshmallows, along with a container of Crisco and a few other items, were basically the entire contents of a food box delivered to one of her volunteer's grandmothers who received food aid, Solari says.

"What would she even make with this?" she notes.

Solari's nonprofit, SuperFood Drive, works with food banks and pantries, schools and individuals on food drives that focus on nourishing, nutritionally dense nonperishables. And it offers materials, available for free download on its website, that groups and individuals can use to host their own healthful food drives.

"People think if it's nonperishable, it must be unhealthy," says Solari. "Instead of reaching in the back of the pantry for what's expired or undesired, we're asking people to really think about health."

That means donating items like lentils, canned tuna or canned salmon, peanut butter without added oils or sugars, brown rice, quinoa or kidney beans. With these sorts of pantry staples, she says, "you can have amazingly healthy food as the basis of any meal." 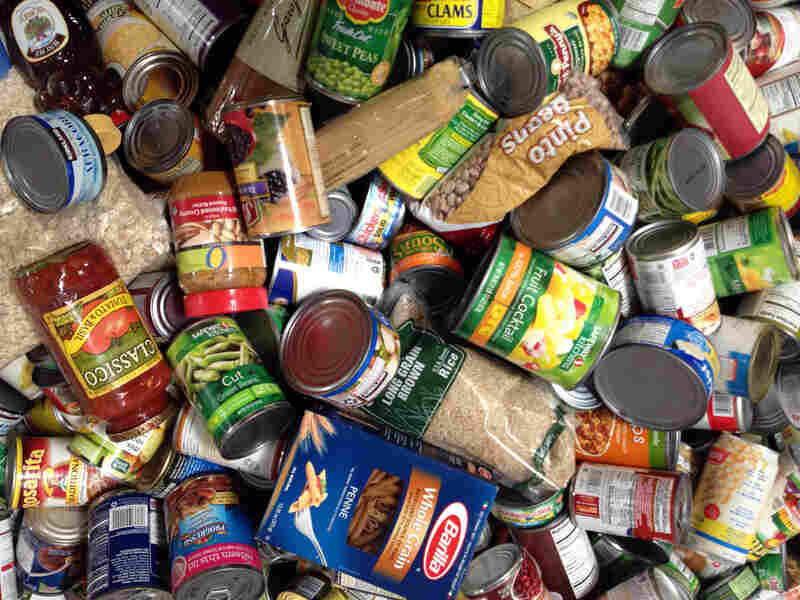 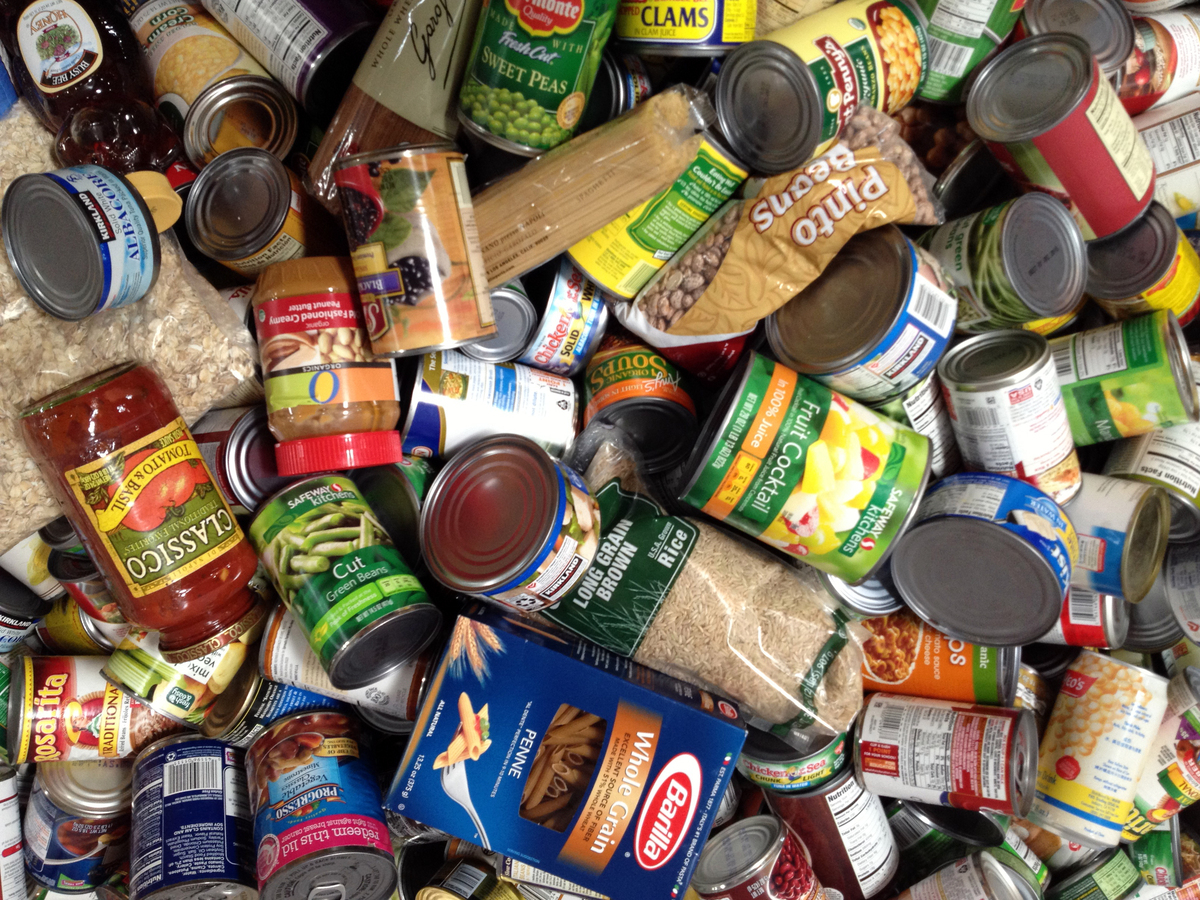 Peanut butter, canned tuna and canned fruits in natural juices are among the "superfoods" on Feeding America San Diego's list of requested donations.

Though many people may not realize it, eating this way – with a focus on whole, unprocessed or minimally processed foods – can also be a lot cheaper, when you look at the cost per serving, Solari notes. A cost-comparison chart on Superfood's website shows how swapping in raisins for fruit snacks or rolled oats for instant oatmeal will get you a much better (and healthier) bang for your buck.

Giving food pantry clients this type of price information is key to helping them make better nutritional choices when they're shopping, too, says Jennifer Gilmore, executive director of Feeding America San Diego, a hunger-relief organization that serves some 480,000 people in San Diego County, Calif. She says 67 percent of families who frequent food banks make their food purchases "based on dollars, instead of anything having to do with nutrition."

One in 7 Americans visited a food pantry in 2013, according to a national survey conducted by Feeding America.

"These are the elderly, single parents, they're returning veterans," notes Solari. "They're people just like us, our neighbors who hard times have forced to choose between paying for utilities and food."

A Glimmer Of Hope In The Fight Against Hunger In America

Many of these people are also struggling with diet-related diseases like diabetes. So in recent years, hunger-relief groups have been putting an increasing emphasis on healthful eating, says Gilmore, who worked with Solari to revamp her organization's nutritional policies. That involved changing not only the types of foods that pantries solicited from donors, Gilmore says, but also educating volunteers and staffers about healthier cooking, so they can pass that knowledge on to the people they serve.

"It's one thing to distribute brown rice and quinoa and bok choy," says Gilmore. "It's a whole other thing to get families to taste it and cook it and eat it at home." Her group now hands out recipes with food boxes.

The goal, says Solari, is to make healthful eating approachable and "really debunking the idea that it's an elitist thing."

"It's not enough to fill empty stomachs," she says. "The opposite of being hungry isn't being full – it's being healthy."

Planning to donate to a food drive this holiday season? Here's SuperFood Drive's suggested shopping list. It's also just as efficient to give money to your local bank online.