Accessibility links
Can Breeders Cure What Ails Our Breast-Heavy Turkeys? : The Salt The standard commercial American turkey is the product of decades of intense selective breeding. But breeding for efficiency and size has created new health problems scientists must grapple with. 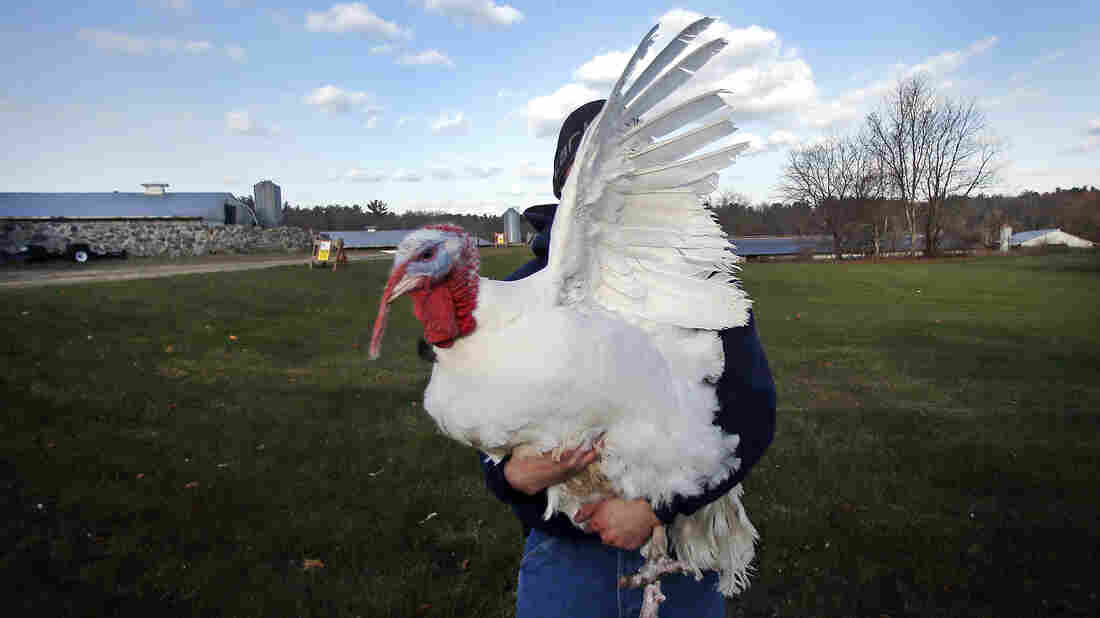 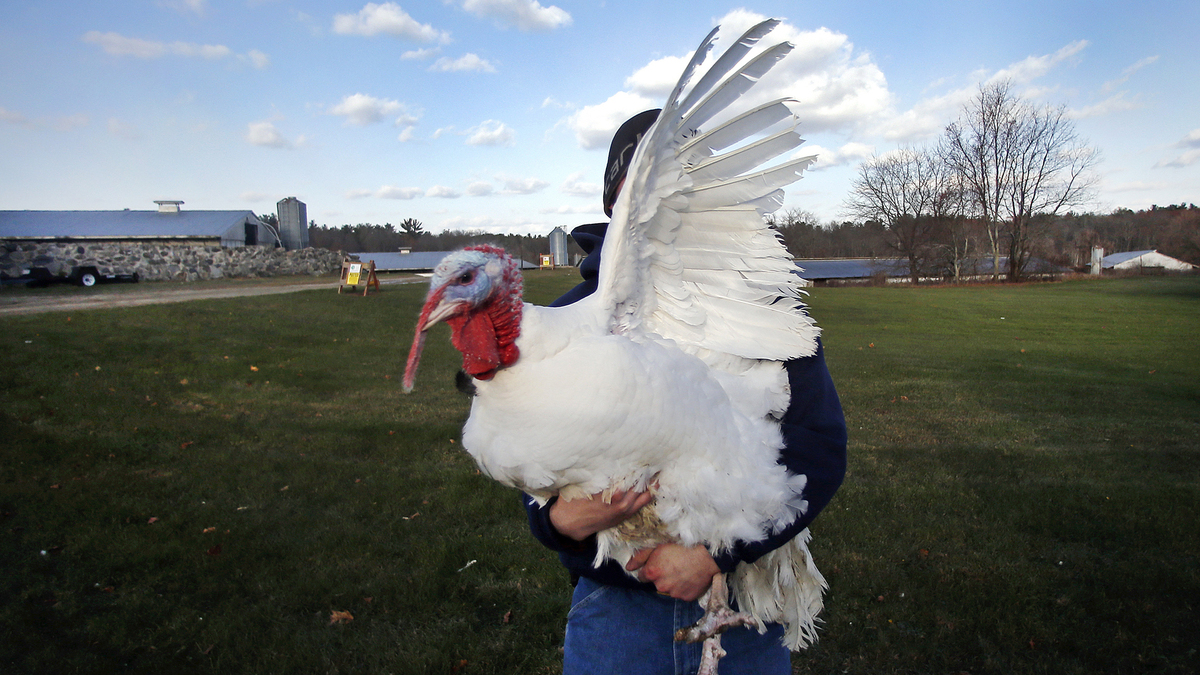 A 40-pound tom turkey flaps his wing as Chris Conley carries him to a pen at Raymond's Turkey Farm in Methuen, Mass., on Friday. The farm raises approximately 20,000 broad-breasted white turkeys per year.

Many Americans will be sitting down Thursday to a wonderfully meaty, broad-breasted white turkey that grew to maturity in a remarkably short period: just 136 days, on average.

We have decades of intense selective breeding to thank for the dramatic evolution of the average American turkey — from a scrawny 13.2 pounds in 1929, to a robust weight of nearly 30 pounds in 2012. A lot of that weight has gone straight to the breast, the meat we adore above all else.

But, of course, there are unintended consequences to the rapid transformation of this domesticated species of poultry. And they affect not just individual birds but the entire U.S. turkey industry, which now produces nearly 300 million birds a year.

Selecting for size, growth and efficiency (the turkey's ability to turn food into meat) has, according to the Poultry Science Association, created birds with "skeletal problems, cardiac morbidity, reduced immune response to some pathogens, and some instances of meat quality issues, among others — all issues that have been, despite years of effort, difficult to address through conventional approaches to breeding."

Did Your Thanksgiving Turkey Take Any Antibiotics?

These issues aren't just a nuisance to turkey producers, who lose money on sick birds. The Humane Society of the United States has also called out the industry for the "welfare problems associated with rapid growth."

But a new paper in the journal Poultry Science offers some hope. Turns out, scientists have almost finished sequencing the turkey genome, which means they'll soon have a lot more information that researchers say they can use to breed healthier turkeys.

Rami Dalloul is a researcher at the Avian Immunology Laboratory at Virginia Tech and a lead author of the paper. He says the genome is about 95 percent completed. "All these genomic regions, or sequences, that were missing, now we have them," he says. "Scientists or breeders in industry or academics — they can work on uncovering links between specific genes and particular issues in the industry."

Dalloul specializes in immunology, and he's especially interested in using genetic information to breed birds that are resistant to pathogens like salmonella, E. coli or influenza. (The most recent major outbreak of salmonella from contaminated turkey was in 2011, when 136 people were infected with an antibiotic-resistant strain of Salmonella Heidelberg.)

"We already have some lines of turkey that are more resistant to salmonella than others," he says. "Once you have the genetic markers, you can start breeding."

Dalloul says it will take years, and generations of birds, to get to a final bird that's resistant but also healthy in other ways and efficient. "Once you find one that's resistant to salmonella and one that's more efficient in production, you cross those lines, you'll breed again to get eggs to get the birds for raising."

Breeders may also use the genetic information to reduce skeletal deformities from which some birds suffer because their muscle growth outpaced their bone growth. According to Dalloul, the industry is already selecting against those deformities, but the genome may reveal new clues about which genes are associated with stronger bones.

The Humane Society of the United States also advocates for breeders to consider welfare for both turkeys and chickens, which are afflicted with many of the same health problems. In a 2006 report, the group wrote:

"In the United States, broiler chickens and turkeys now come from strains produced by only four and three primary breeding companies, respectively. If these seven companies refocused genetic selection programs to prioritize health and well-being above all else, they could dramatically improve the welfare of fast growing broiler chickens and turkeys, and the long term solution is in their hands."