Accessibility links
Female Butchers Are Slicing Through The Meat World's Glass Ceiling : The Salt The meat industry traditionally has been a male-dominated field. But as demand for local meat grows, that's made more room for women to carve out ownership roles in the business. 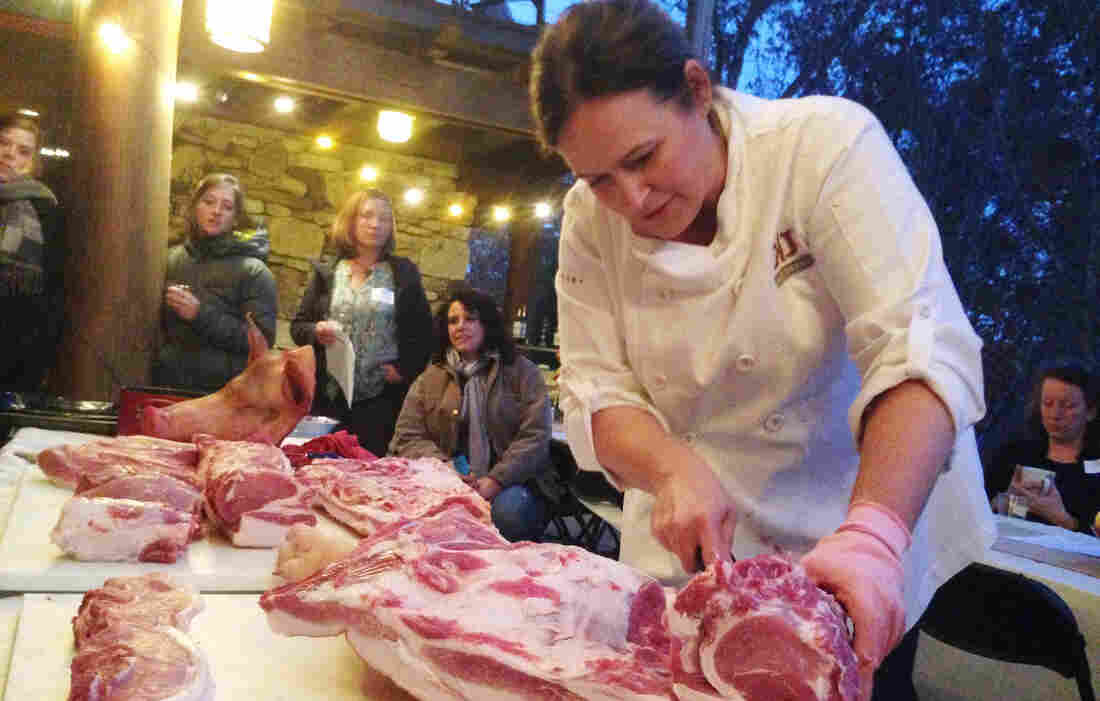 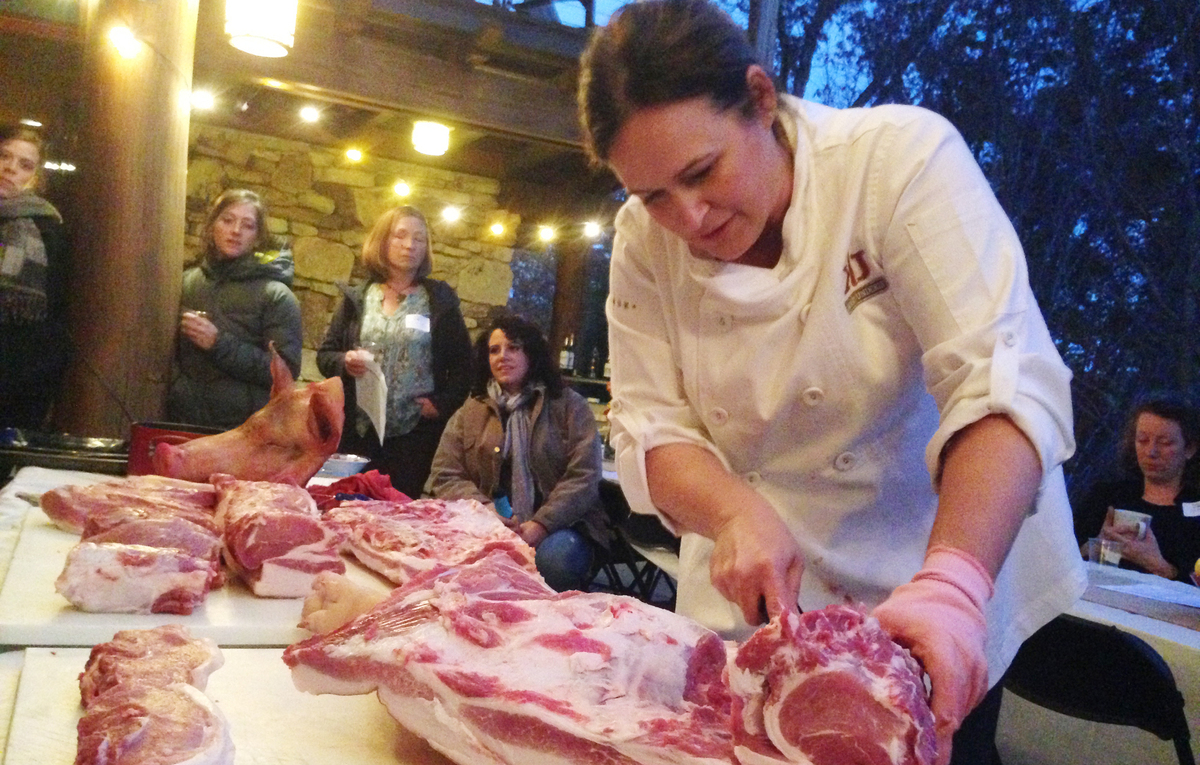 Master butcher Kari Underly cuts into a hog during a "Women in the Meat Business" workshop in Chapel Hill, NC. 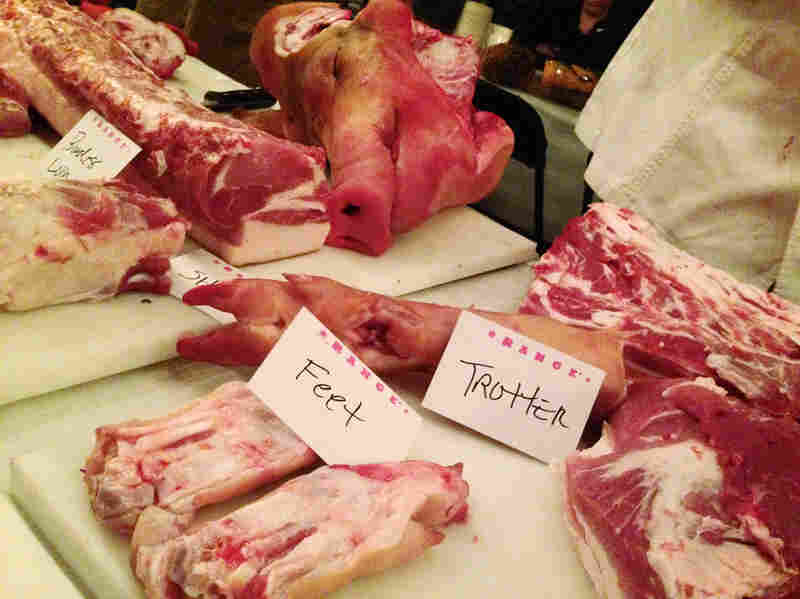 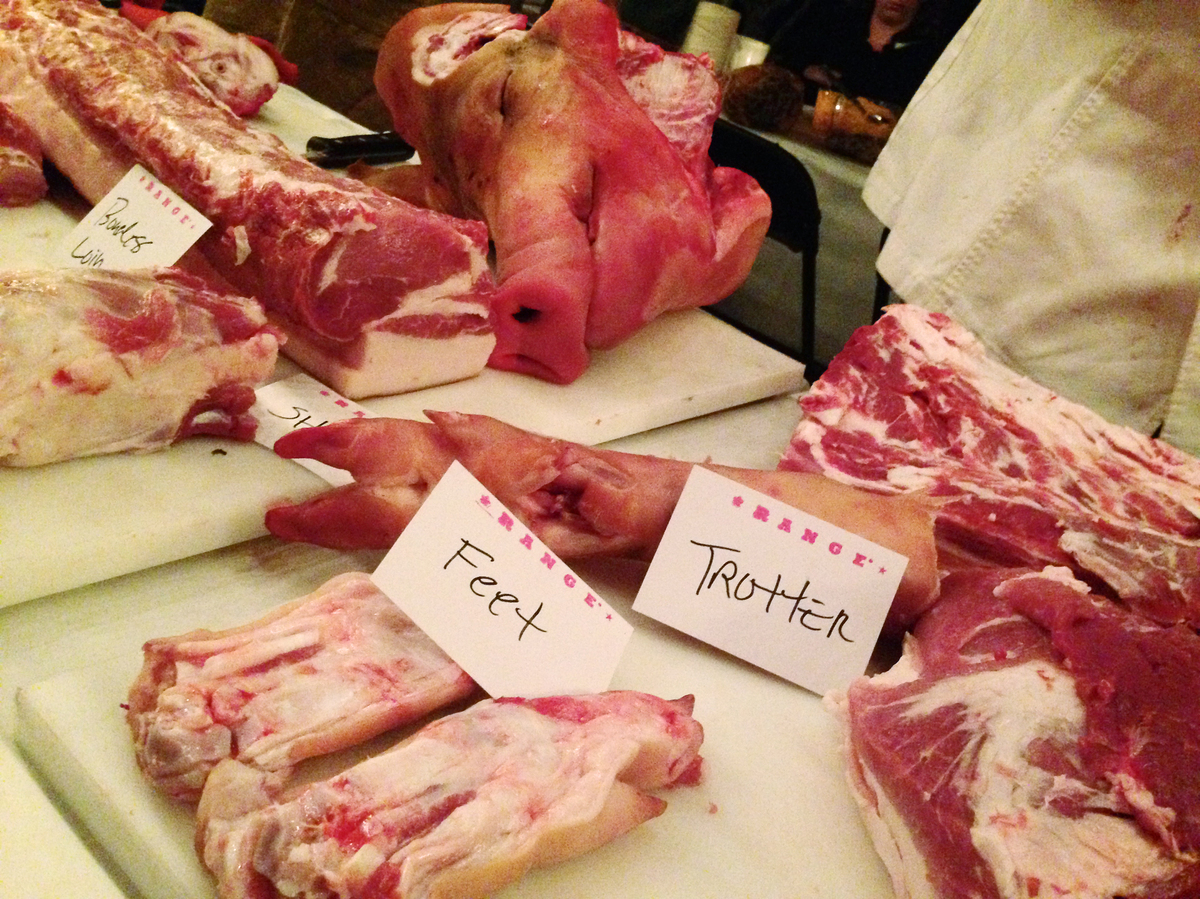 Hog parts are displayed on a table during a workshop for female butchers in Chapel Hill, NC.

Kari Underly is slicing through half a hog as if it were as soft as an avocado ... until she hits a bone.

"So what I'm doing now is I'm taking out the femur bone," she explains to a roomful of about 30 women watching as she carves the animal. "The ham is a little bit of a drag, if you will, 'cause we have to make money, and not everybody wants a big ham."

Underly is a fit, 46-year-old master butcher from Chicago. Her father and grandmothers were butchers. She put herself through college cutting meat. These days, she encourages other women to enter the business.

The meat industry has always needed women, but for generations, women have worked for low pay in slaughterhouses, or in other support positions. Now, a small but growing number of American women are taking ownership in the meat business.

Underly, who runs a meat training company called Range Incorporated, was recently in Chapel Hill, N.C., demonstrating to about 30 women how to slice and dice the tastiest and most profitable parts of a hog.

"You just want to be careful," she advises the women gathered around. "There's the scapula bone right here, and we want to make sure we don't wreck it."

Tootie Jones was one of the women leaning in as Underly sawed, hacked and sliced. "She's a knife-wielding rock star in her own right, and has quite a following," says Jones, referring to Underly. Jones owns a cattle ranch in West Virginia.

"And I think one thing Kari's done is inspired a lot of people to go out, pick up a knife, learn how to handle a knife and to go out and develop a business," says Jones.

In addition to demonstrations like this, Underly organizes "Grrl's Meat Camps." She says the meat industry is changing in a way that now allows room for more women.

"Meat production has always been a male job, just because of the sheer size" of the animals involved, she explains. "It's a physical job — actually being able to lift these large animals. But as we're choosing to buy meat closer to home, we're looking for more craftsmen, if you will, to be the butcher, so we can get them on every corner."

She's echoed by Sarah Blacklin, director of NC Choices, a nonprofit in North Carolina that's trying to build more local meat supply chains. "That has opened up this avenue for not just the raising of the meat, but the selling, the marketing, the distributions," says Blacklin. "I think it's a natural avenue for women to move into."

In North Carolina, the number of people raising and selling their own meat has gone from a few dozen, a decade ago, to more than 800 today. It's unclear how many of them are women, but one of those businesspeople is Jennifer Curtis.

In a chilly walk-in storage cooler in Durham, Curtis watches as fresh beef is tagged for distribution. Then she reaches down and picks up a thick chunk of dark red meat: "Oh my gosh, have you had this before? It's Osso Buco, or beef shank," she tells me. "It's right down there, close to the ankle. It's got a lot of bone in it, bone marrow, just fantastic for braising and stewing, beautiful flavor."

Curtis is the co-CEO of Firsthand Foods, along with another woman. She got into the meat wholesale business four years ago, after meeting too many farmers having trouble marketing their meat.

"We were also meeting more and more chefs who wanted fresh local meat but couldn't get enough from an individual farmer," says Curtis. "So I thought, there needs to be a business right here in the middle."

Curtis says 90 percent of the people that she works with are men — farmers, processors and chefs.

"We run into a lot of men," she explains, "and it's taken some time for them to get used to the fact that we own this company and we're selling the meat. But it's been good."

She says it has taken a long time to build trust, especially among cattle ranchers in what she calls the "old boy network." But Curtis says she proved to them that she could get them top dollar for their product. And that's the bottom line.