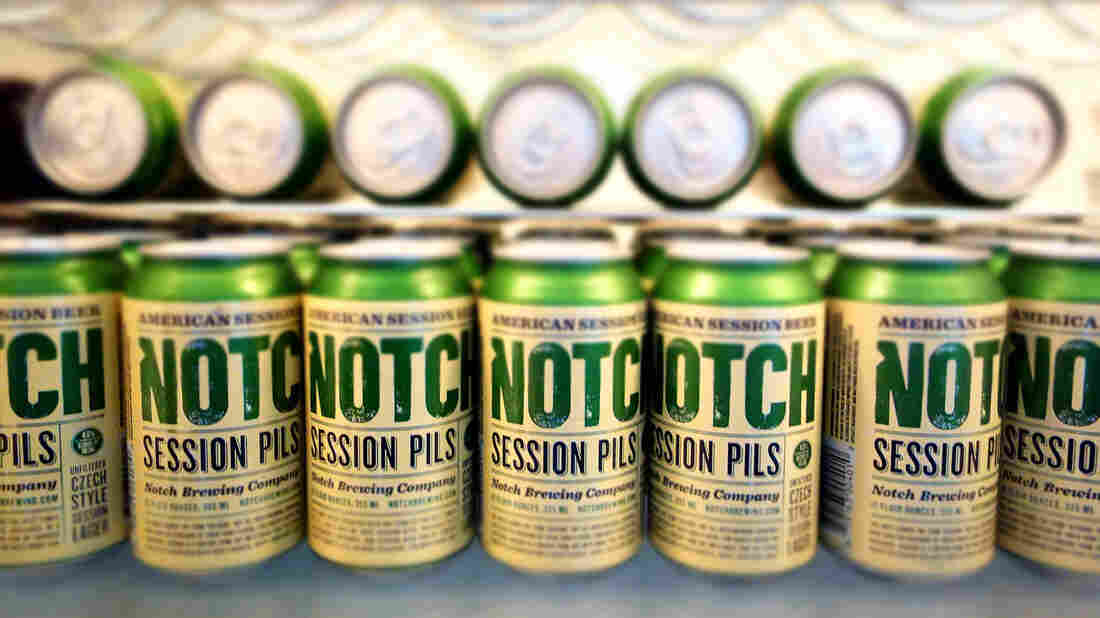 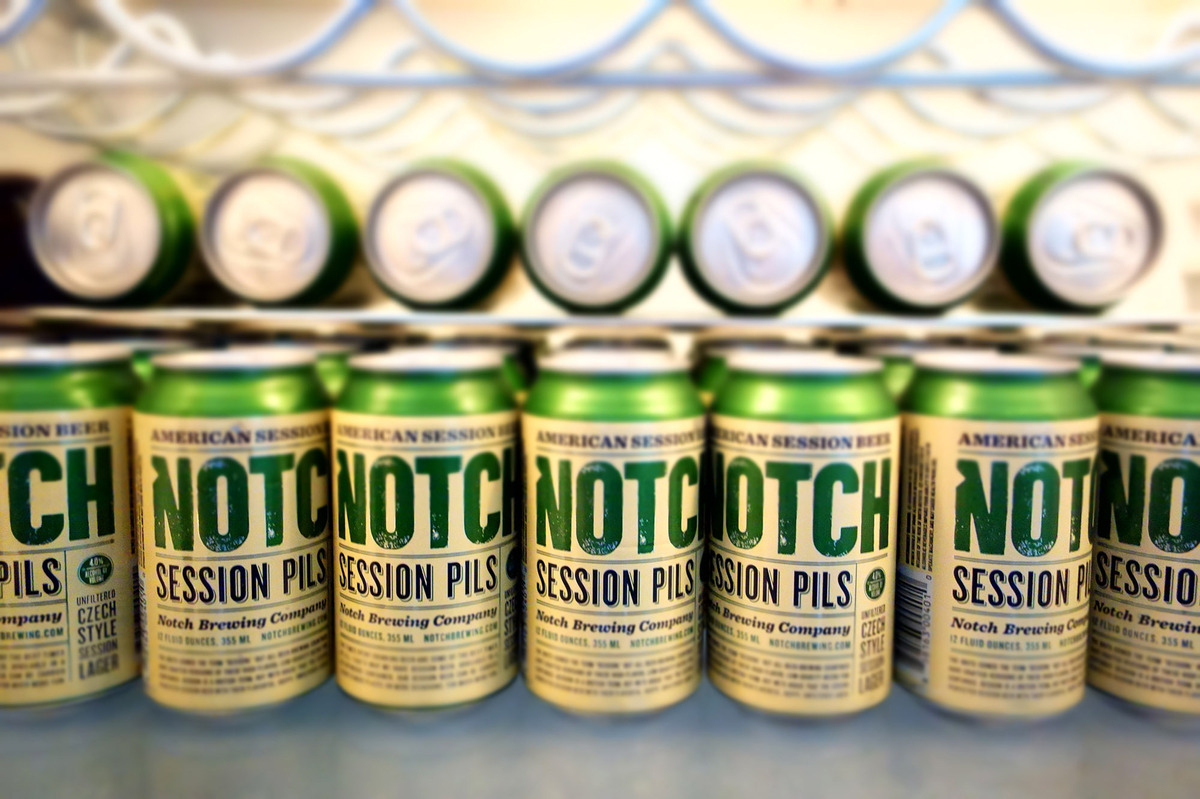 Chris Lohring founded Notch Brewing in 2010. The company's lineup includes a Czech pilsner, a Belgian saison and an India pale ale. All of the brews are session beers — meaning their alcohol by volume, or A.B.V., is less than 5 percent.

Tailgating, camping trips and wedding receptions are just some of the occasions when many Americans down a few beers in one sitting. For those who prefer high-alcohol microbrews and other craft beers, that can lead to trouble.

But a growing trend is offering another option: Session beers emphasize craft-beer taste with alcohol as low as or lower than big-brand light beers.

Chris Lohring has been brewing craft beer professionally for more than two decades. In 2010, he founded Notch Brewing. The company's lineup includes a Czech pilsner, a Belgian saison and an India pale ale. All of the brews are session beers — meaning their alcohol by volume, or A.B.V., is less than 5 percent.

"The only thing in the United States previous to session beer being available by smaller brewers was the light beers of the world, which are mass-marketed, flavorless beers," Lohring says. "You could call them a session beer, but to me, a session beer needs to have some flavor. It needs to entice you for that second pint."

Lohring likes to say, "One and done's no fun." That concept might sound familiar. In the 1960s and '70s, Schaefer Beer ran countless ads with the slogan, "The one beer to have when you're having more than one."

But when Lohring first started making craft session beers, other brewers told him he was crazy. Stronger brews, including Sierra Nevada's Torpedo Extra IPA with 7.2 percent alcohol, were getting all the ... well, buzz. But today, Lohring and Notch Brewing have plenty of company. That includes Founders Brewing in Grand Rapids, Mich., which introduced its first session beer in 2012. 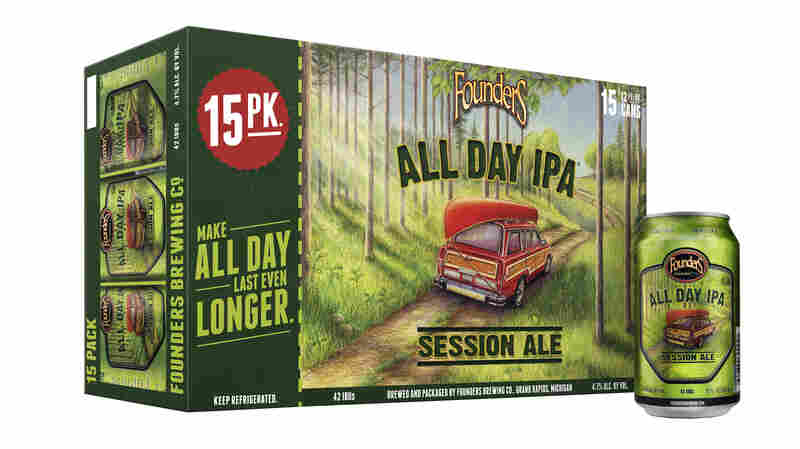 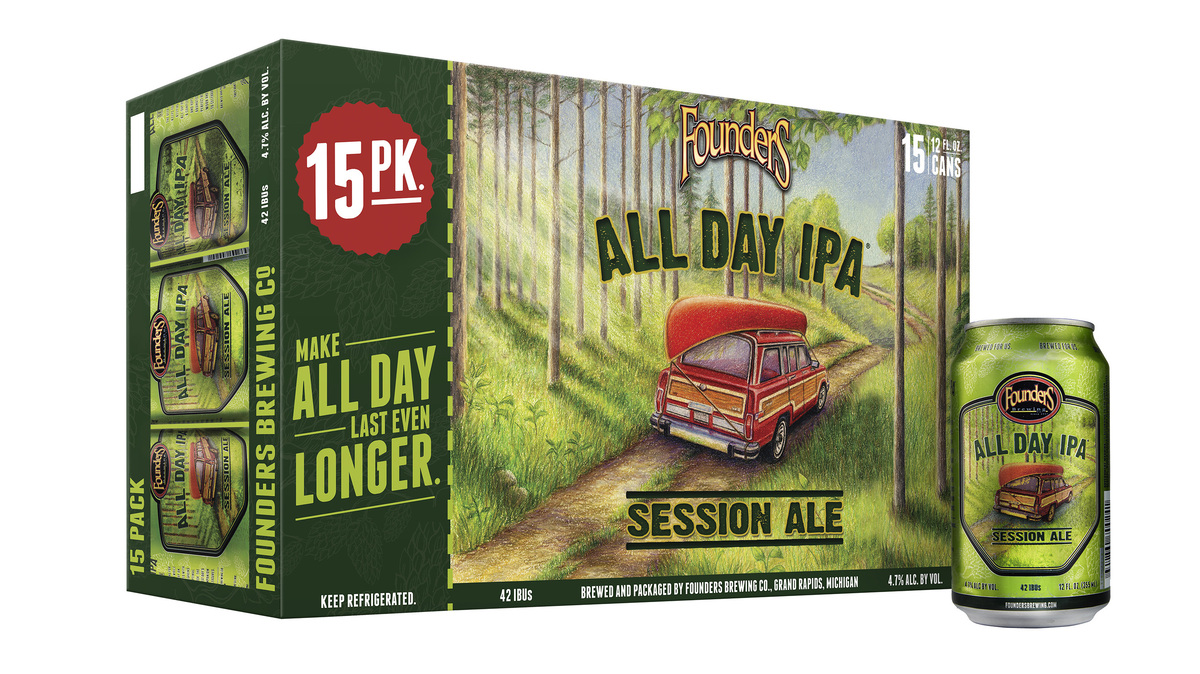 All Day IPA, from Founders Brewing, is sold in a 15-pack, instead of the traditional 12-pack.

"We've had this great, broad stable of really well-respected, well-recognized beers, and then later in the game, All Day IPA came, and that's the one that's risen to the top for us now," says Chase Kushak, chief operating officer for Founders.

All Day IPA is Founders' first session beer. It's sold in 15-packs instead of the traditional 12-pack. Kushak says Founders isn't promoting longer drinking sessions, but when they do come up, All Day IPA — with its 4.7 percent alcohol — is an alternative.

"Those situations where people were drinking throughout the day already existed. And so our goal was to take a very responsible approach to that," Kushak says.

The history of session beers is like an unfiltered microbrew — a little hazy. Most versions trace the term "session" to British legislation during World War I that cut pub hours to one lunchtime and one evening session. But others argue it's a more casual reference to a long stay at the bar. Wartime rationing also limited ingredients, making it harder to produce boozier brews.

But can today's low-alcohol offerings earn high marks for flavor? To answer that, I turned to Jason Alstrom, who has been reviewing beers for nearly 20 years. He's the co-founder of Beer Advocate, one of the top craft beer websites and magazines. On a warm November afternoon, I met him in Boston on the patio at Deep Ellum, a bar that serves session beers from around the world.

We ordered a Guineu Riner, a golden beer brewed in Barcelona, Spain. By any standard this is a low-alcohol beer. Bud Light and Coors Light clock in at 4.2 percent. Gineu Riner has an alcohol by volume of just 2.5 percent.

"It's just packed with hops," Alstrom says after his first sip. "It's perfectly balanced, but it's really hard to think that it's 2.5 percent. Just an amazing beer."

The experts are convinced, but the customer is always right. And standing at the bar, Newton, Mass., resident Marcin Kunicki told me he recently had a memorable weekend — that he can actually remember — thanks to a session beer.

"We had a half-keg of it amongst four guys. We played cards all day. It was a weekend away with the guys," Kunicki says. "And, you know, not to call ourselves alcoholics, but we drank all day."

Kunicki's friend Rob Ross was on that trip. Ross is a home brewer, so he has a hands-on appreciation for the art of making a flavorful, low-octane beer. But he also understands the main appeal.

"You can have a few of them and not be totally drunk," Ross says, laughing.

And whether you sip or swig, the best session beers will leave with you something to savor.