Accessibility links
From Potatoes To Salty Fries In School: Congress Tweaks Food Rules : The Salt The giant federal spending bill that's expected to go to a vote Thursday will give schools some flexibility in implementing nutrition standards. Also a winner: the potato lobby. 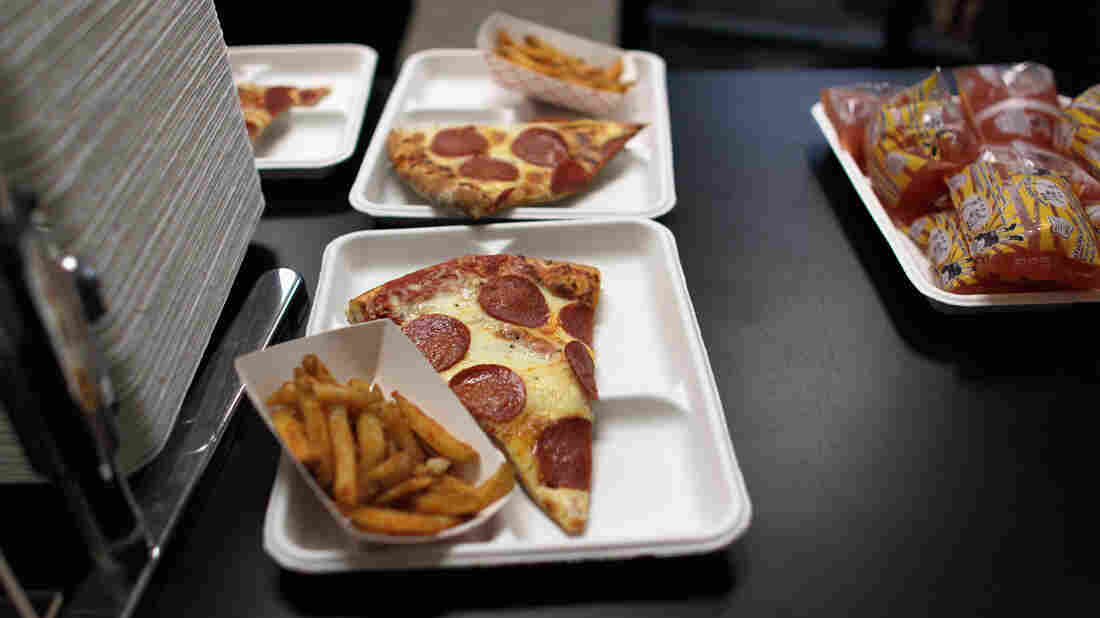 When it comes to salty french fries or pizza served at lunch, schools may get more time to dial back sodium content, thanks to a provision in the federal spending bill headed for a vote on Capitol Hill. Joe Raedle/Getty Images hide caption

The gargantuan budget bill that lawmakers on Capitol Hill are expected to vote on Thursday does more than dole out federal dollars to keep the government running.

For starters, the bill — aka, the 2015 Omnibus Appropriations Bill — includes a provision that will give school food directors more flexibility when it comes to adopting 100 percent whole grain items, such as pasta and biscuits, in school breakfast and lunch meals.

And when it comes to salty french fries or pizza, schools may get more time to dial back the sodium content, thanks to a provision that could postpone a mandate on sodium reduction that's scheduled to take effect in 2017. Lawmakers say further reductions on salt should be predicated on the latest scientific evidence.

The School Nutrition Association, which represents 55,000 school cafeteria professionals around the country, released a statement supporting these "flexibility" measures. The association has been lobbying for changes, as complaints have piled up that some kids have rejected the move to more healthful fare.

The SNA says that since the nutrition standards mandated by the Healthy, Hunger-Free Kids Act took effect in 2012, school lunch programs have lost at least 1 million student customers. And some schools are losing money.

Earlier this year, a political food fight ensued after the SNA backed a proposal that would have allowed some school districts that were operating at a net loss to temporarily opt out of the nutrition standards.

But the opt-out waiver was dropped after first lady Michelle Obama and nutrition advocates made a stink about the proposed rollbacks. Nutrition advocates say they're relieved by the compromises in the final spending bill.

"We're pleased that Congress didn't waive all school lunch standards," Margo Wootan of the Center for Science in the Public Interest wrote to us in an email.

But she adds that lawmakers should stay out of the way when it comes to implementing the nutrition standards.

"It's best for kids if school nutrition is based on science, not politics," Wootan wrote.

And, she says, schools should be able to find the whole grains they need to meet those standards, as food companies reformulate and make more whole grains available.

When it comes to sodium reduction, Wootan says the Dietary Guidelines Advisory committee is likely to confirm that the science is strong. There are a lot of published studies on the harmful effects of too much salt in our diets.

The first round of sodium reductions is now being implemented in the school lunch program. The law requires another reduction in 2017. The American Heart Association says any move to delay the further reductions of sodium in school meals — whether it be in a salty slice of pizza, an order of fries or even a salty condiment — will harm kids' health.

"If Congress hits the pause button now on the sodium reduction, it's possible that more children could develop high blood pressure and be at risk for heart disease or stroke before they even become adults," Nancy Brown, CEO of the AHA, wrote in a statement released last night.

Critics also jumped on a provision in the bill that would permit white potatoes to be included as part of the Women, Infants, and Children nutrition program, which serves low-income mothers and their children. WIC vouchers can be used to buy fresh fruits and vegetables — but not potatoes. And that's because at 112 pounds per capita, most Americans already include plenty of spuds in their diet.

Nonetheless, the industry has lobbied to let potatoes in — and it looks like the omnibus bill has finally granted that wish.

Last year, when this issue heated up, a post on the National WIC Association blog quipped "conflicts abound in Congress, but this one takes the cake, or should I say the potatoes."