Accessibility links
Kalettes, Broccoflower And Other Eye-Popping Vegetables For 2015 : The Salt Kale's days as the superfood-du-jour may be numbered. Next up: Kalettes? It's a cross between kale and Brussels sprouts, and it's one of a few bewitching hybrid vegetables that could go big in 2015. 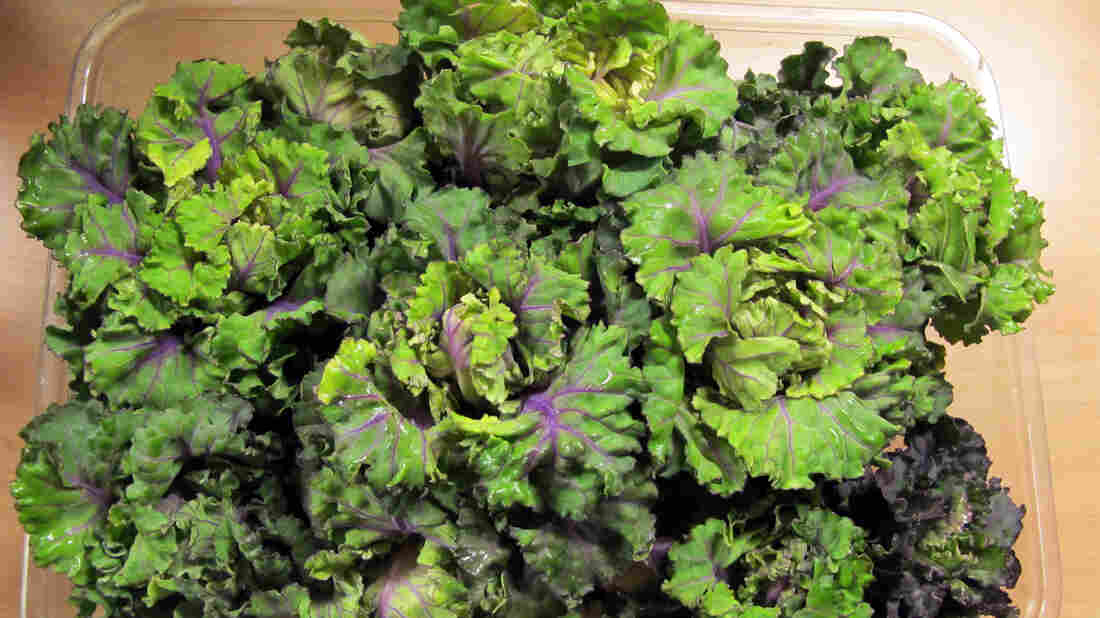 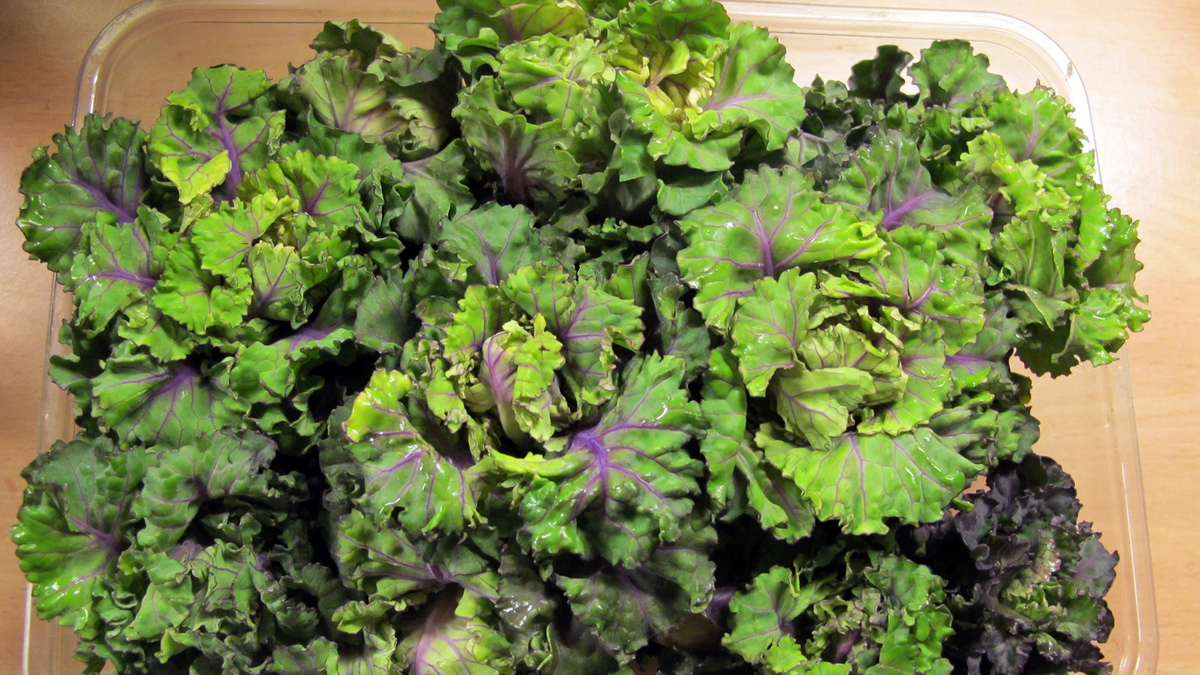 Kalettes, BrusselKale, Lollipop Kale and Flower Sprout: This little vegetable, a cross of kale and Brussels sprouts, goes by a lot of names.

Does a cross between Brussels sprouts and kale sound like your vegetable dream come true? Maybe so, if you're someone who's crazy for cruciferous vegetables and all the fiber and nutrients they pack in.

Meet Kalettes, a hybrid of the two that looks like a small head of purple kale. It arrived in U.S. supermarkets like Trader Joe's and Whole Foods this fall, and is being marketed as "a fresh fusion of sweet and nutty."

It's not the only new hybrid vegetable that we may be seeing a lot more of in 2015. Kendall College, a culinary and hospitality school in Chicago, predicts that broccoflower, broccolini and rainbow carrots may also leap from the specialty fringes to the mainstream produce aisle, owing to their terrific flavor and good looks.

Why now? People are moving away from the comfort food they fell back on during the recession, says Christopher Koetke, vice president of Kendall's School of Culinary Arts. "People are starting to say OK, I can be a little more adventuresome."

"Those are two vegetables that are incredibly popular, and chefs are cooking them constantly," says Koetke. But Kalettes: The British company Tozer Seeds came up with the idea to develop the hybrid, which also goes by BrusselKale and Flower Sprout, 15 years ago. Tozer debuted it in the U.K. in 2010 before launching it in the U.S. in 2014.

The flavor of kalettes is more subtle than that of Brussels sprouts, making it tasty raw or sauteed, says Koetke. He recommends roasting or blanching, much like you would Brussels sprouts. 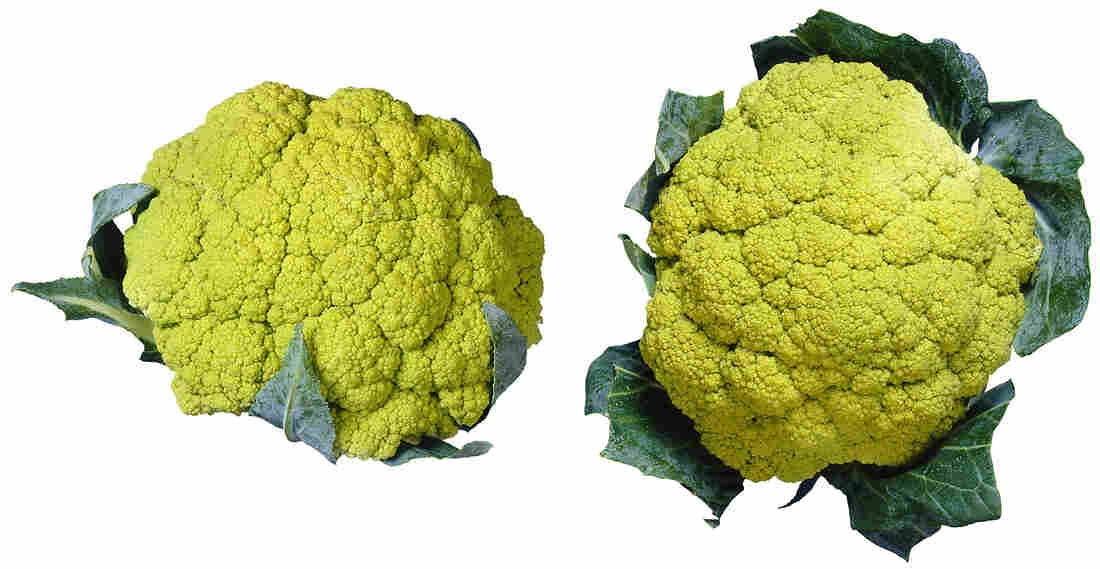 Broccoflower was originally grown in Holland and hit the U.S. market in 1989. It's remained a relatively specialty item since then, but culinary experts say it may soon become more widely available. Brand X Pictures/Getty Images hide caption 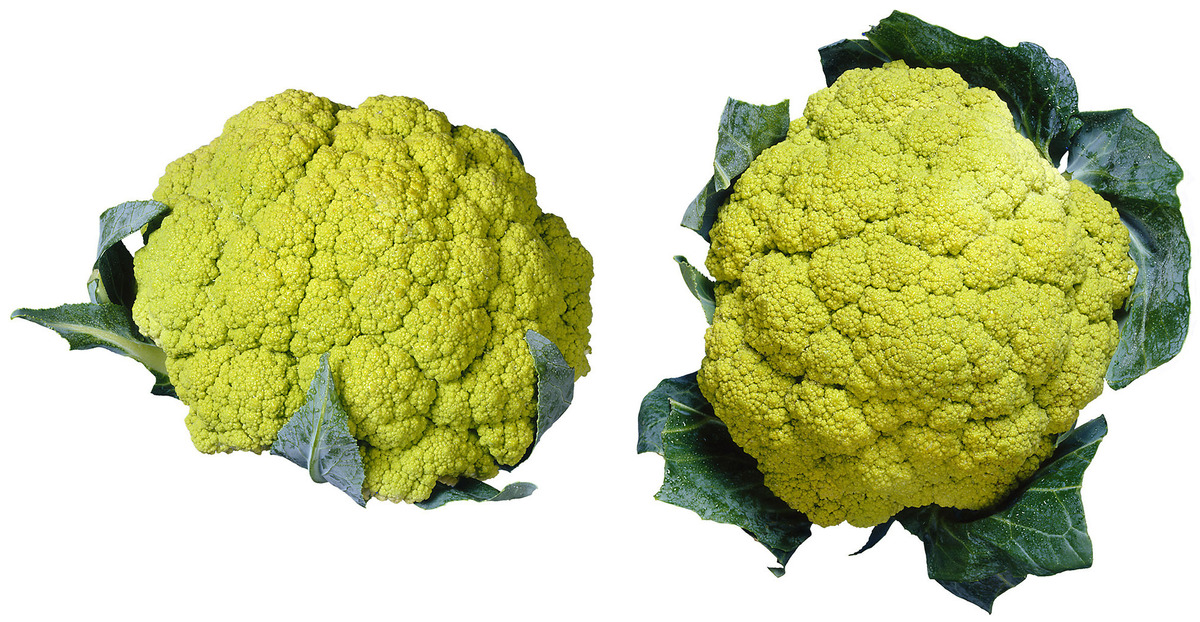 Broccoflower was originally grown in Holland and hit the U.S. market in 1989. It's remained a relatively specialty item since then, but culinary experts say it may soon become more widely available.

Broccoflower, a cauliflower with a pale green tint, was first grown in Holland and brought to the U.S. by Rick Antle of the family farm Tanimura and Antle in California. His farm coined the name Broccoflower and began distributing it in 1989.

The flavor is similar to a cauliflower but slightly sweeter. "Cook it and give it a whole smoke," says Koetke, and "it develops a whole separate flavor profile."

While it may not be an especially novel ingredient for chefs, the growing popularity of cauliflower may mean it's ready to move from the farmers market into more supermarkets. 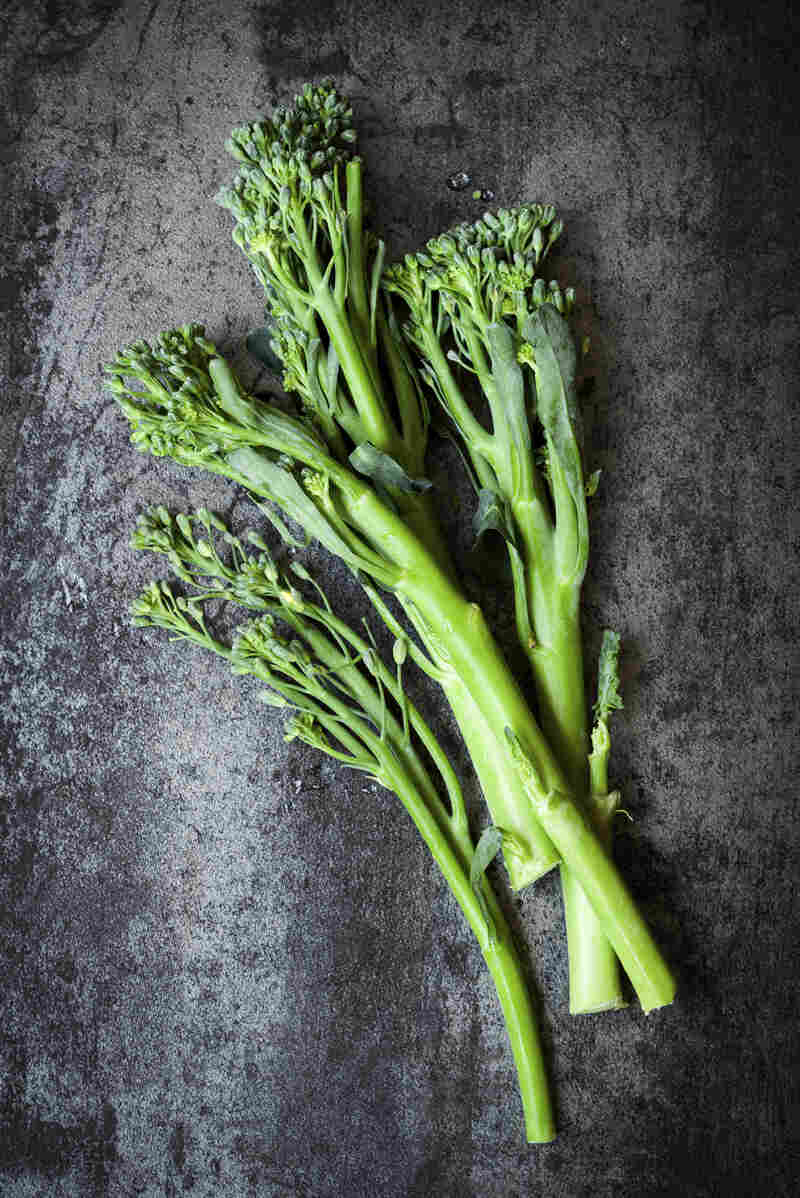 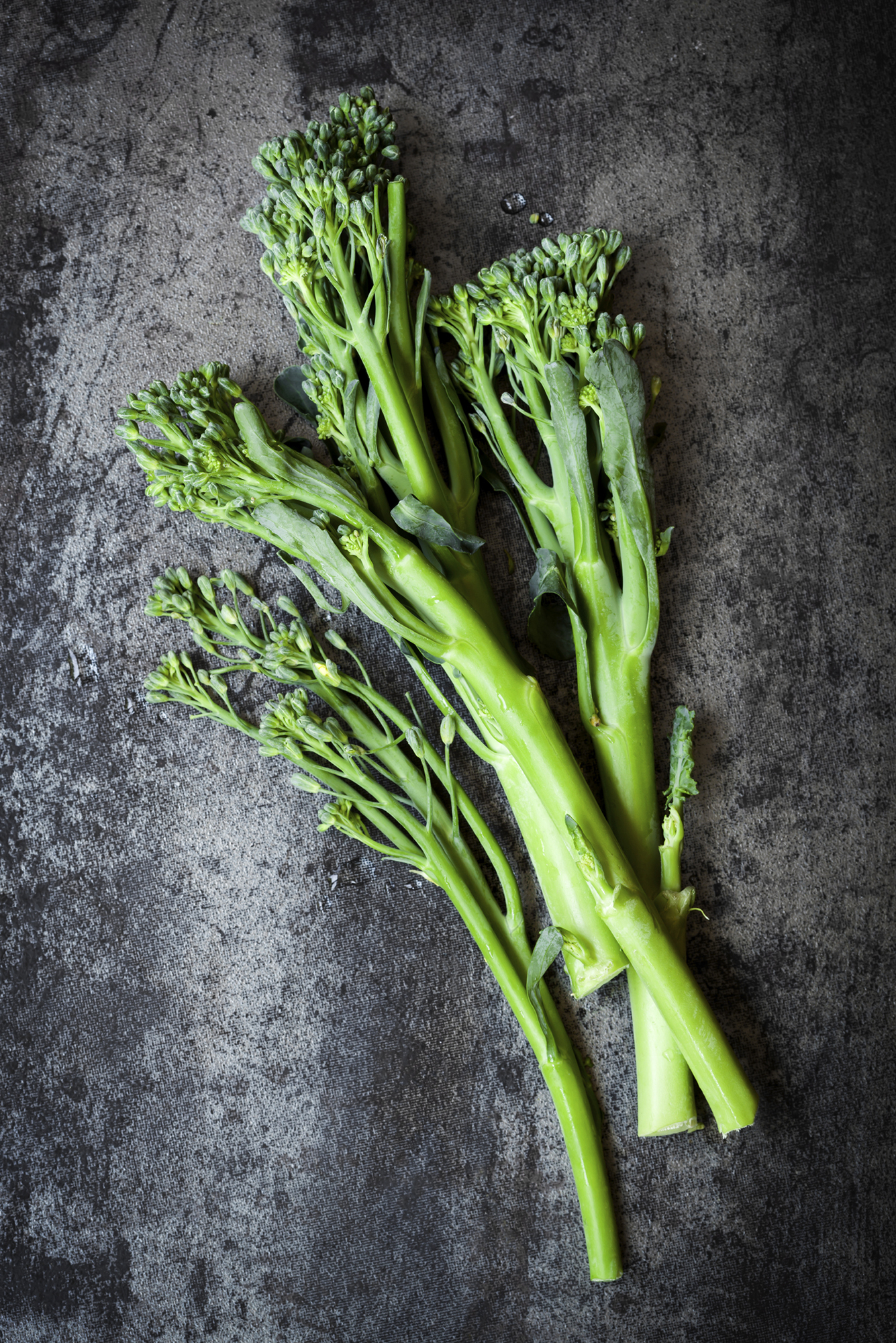 This cross, sometimes called baby broccoli, was first hybridized in 1993 in Yokohama, Japan, by Sakata Seed Co. Originally called "apabroc," it wasn't until 1998 that it began selling under the name broccolini.

It looks just like broccoli, but has longer stalks and smaller florets. Its taste is subtly sweet with a bit of pepper. Because of its slender stalk, it takes less time to cook than traditional broccoli. "Word to the wise: Keep a close eye on it because it overcooks relatively easily," says Koetke.

You've maybe seen it at a farmers market or a specialty store, says Koetke, but its beauty, full flavor and cute name may help it soon reach a wider audience. 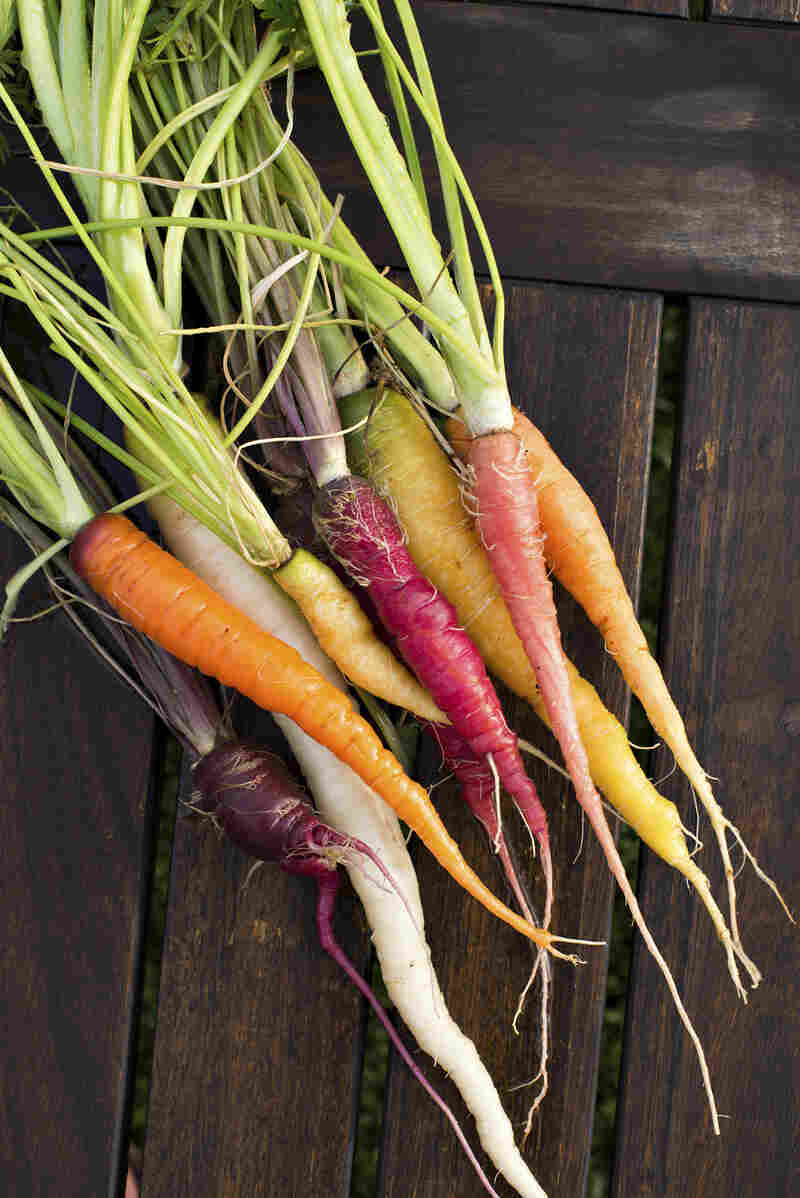 Rainbow carrots were originally developed by the USDA as an experiment to get more nutrients in food. Mark Skalny/Getty Images/iStockphoto hide caption 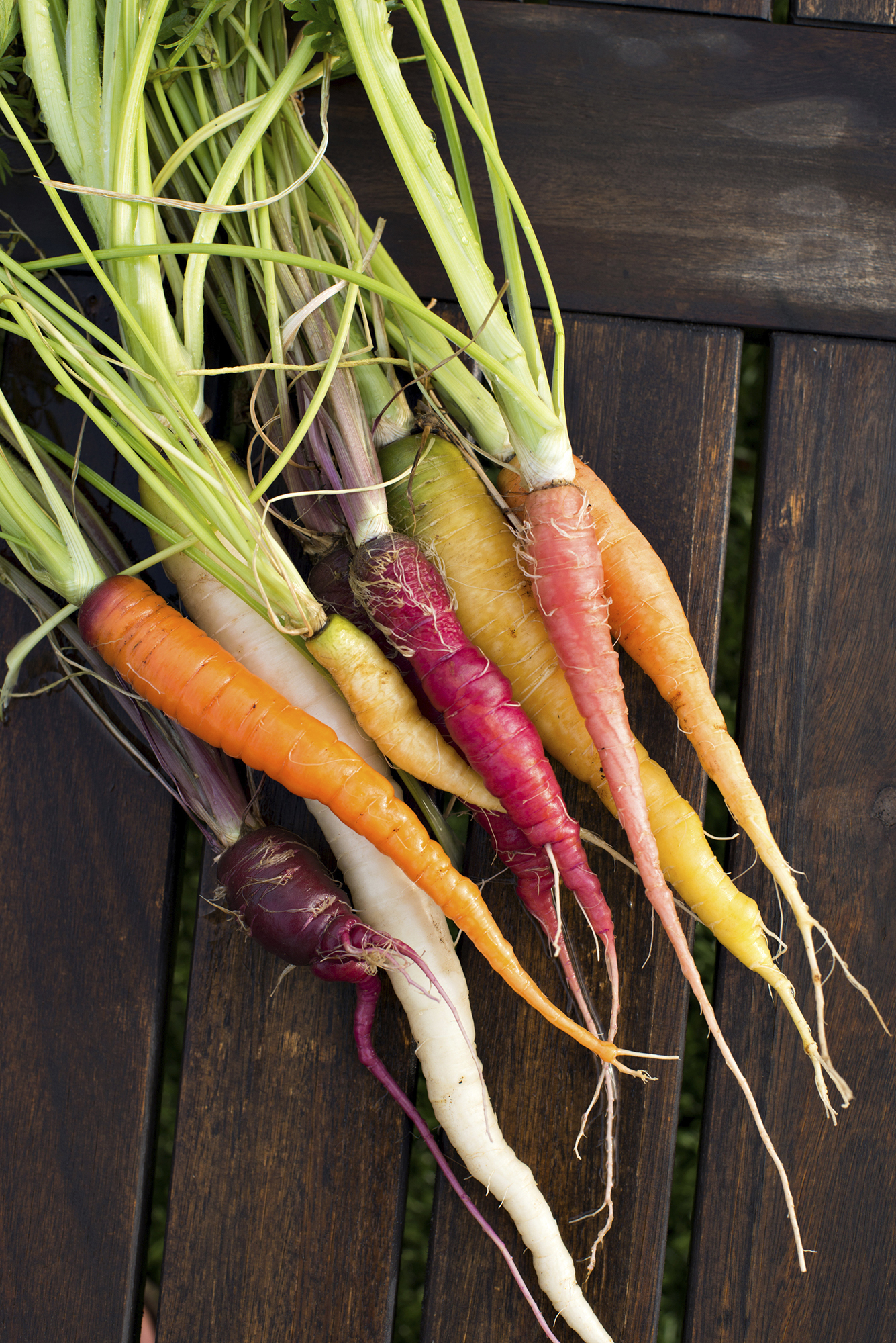 Rainbow carrots were originally developed by the USDA as an experiment to get more nutrients in food.

The highly pigmented carrots — in a wild rainbow of purple, red and yellow — we see today were developed by the U.S. Department of Agriculture's Agricultural Research Service in Madison, Wis. But purple and yellow carrots have been around more than 1,000 years, according to the World Carrot Museum.

The USDA breeders' goal was to create carrots with extra beta carotene, which makes the carrots orange and is a key nutrient for us.

Their project worked: The average carrot now provides 75 percent more beta carotene than it did 25 years ago.

To do it, the USDA scientists didn't just add extra orange; they also injected other pigments into carrots, including red lycopene, yellow xanthophylls and purple anthocyanins. These compounds guard against heart disease, help the eyes, and act as antioxidants, respectively. And now you can buy packs of rainbow carrot seeds.

You may not see these kooky carrots in fine dining restaurants, says Koetke. But he does hope to see them appear not just in supermarkets and farmers markets, but in school dining programs, too. As the "Fruit Loops of carrots," he says, they might spur children to choose a healthier option.

As for Koetke's dream hybrid vegetable? "An onion that also tasted like garlic," he says. Chefs are always chopping up onions and mincing garlic. "Boy that would be amazing," says Koetke. "You could eliminate one step."

It might just be possible, since plant breeders have been hybridizing food crops for a while — centuries, actually.

"The general idea is that it's a lot like breeding dogs or breeding cats," says Ali Bouzari, a food biochemist at the University of California, Davis. "You need things that are biologically close enough related that they're compatible with each other."

For example, Brussels sprouts, kale, broccoli and cauliflower all belong to the species Brassica oleracea, and all are now common crosses.

But it's not the same as genetic engineering. "It's just cross-breeding," says Bouzari. "It's horticulture."

It's actually easier to do this for vegetables than for fruits, says Bouzari, because you don't have to wait for a whole tree to grow. Most hybrids — for example, the hybrid tomatoes that have become so ubiquitous — are created to boost yield or disease resistance or durability for traveling long distances to the supermarket.

Alison Bruzek is an intern for NPR's science desk.

An earlier version of this post stated that purple, red and yellow carrots were originally developed by the U.S. Department of Agriculture's Agricultural Research Service. In fact, carrots of those colors have been around for more than 1,000 years, but scientists only began intensively breeding them 60 years ago.