Accessibility links
Japan's Beloved Christmas Cake Isn't About Christmas At All : The Salt The Japanese Christmas cake takes its name from the Christian holiday, but it actually symbolizes building a life of prosperity from nothing. And it's ubiquitous (it's even in your smartphone). 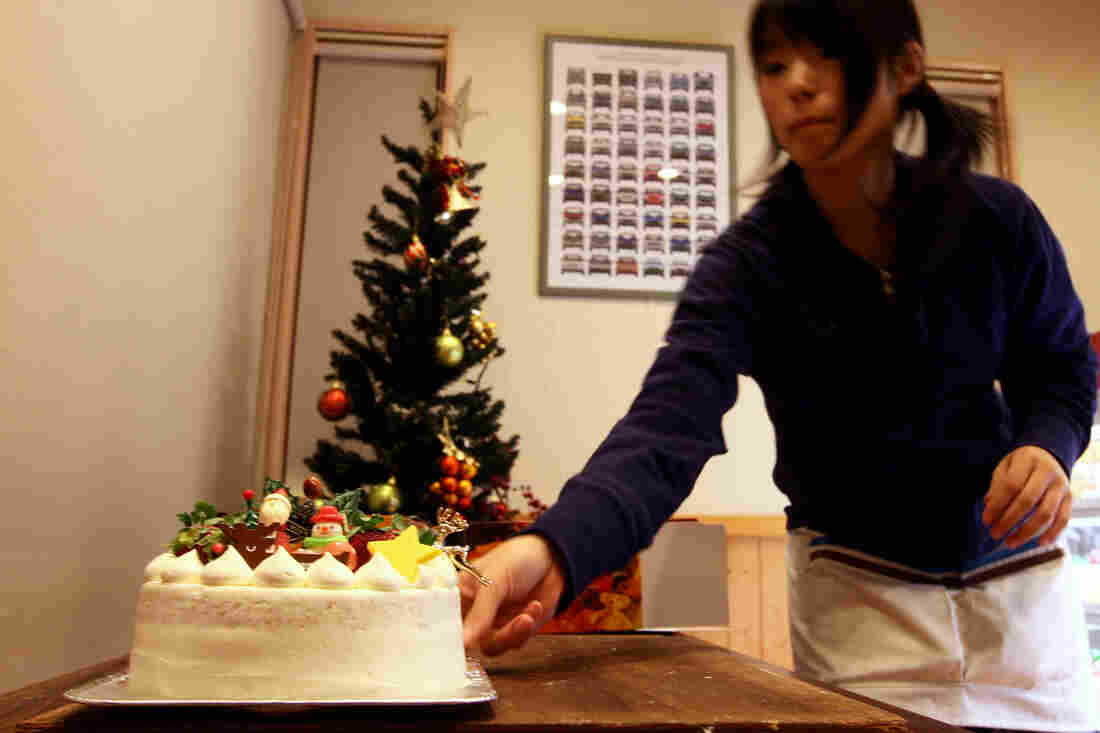 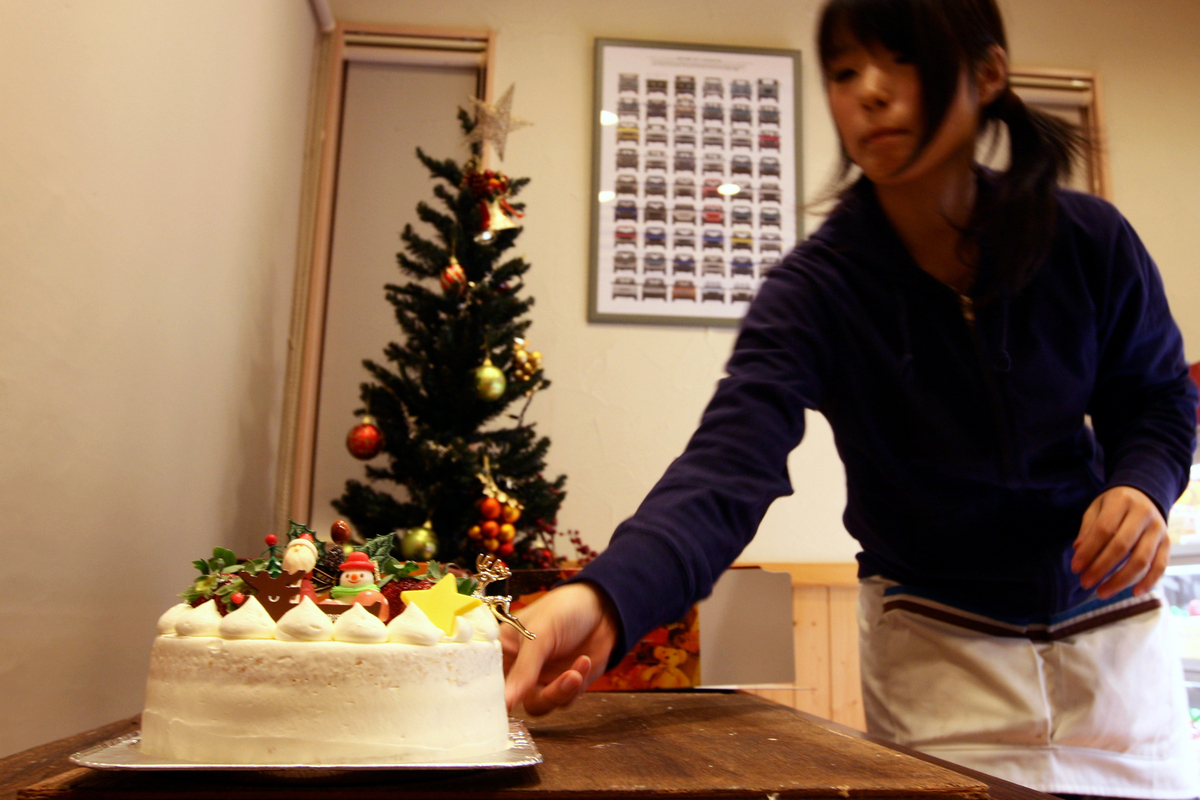 A woman prepares a Japanese Christmas cake at the Patisserie Akira Cake shop on Dec. 23, 2011. The sponge cake is drenched in symbolic meaning.

This is the first in a series of stories exploring the rich diversity of Christmastime edibles around the world, and the stories behind the food.

Explore All The Stories In This Series

Only about 1 percent of the Japanese population is Christian. But you might not realize that if you visited a major metropolitan area during Christmastime. Just as in America, you'll find heads topped with red Santa hats everywhere and elaborate seasonal displays: train sets, mountain scenes and snow-covered trees. Often, these are set inside bakeries hawking one of the highlights of the holiday season in Japan: Christmas cake.

"It's basically sold on practically every street corner," says anthropologist Michael Ashkenazi from the Bonn International Center for Conversion, who studied Japanese culture and tradition.

The dessert is a type of sponge cake, covered with snow-white whipped cream and topped with perfectly shaped, ruby red strawberries. It's a beloved December-time treat on the island nation — and not just because it's delicious. In fact, Christmas cake is now a symbol of commercialism and prosperity, its story intertwined with Japan's rise from ruins after its defeat in World War II.

To understand why, we need to take a little historical detour.

After World War II, American soldiers led the work of rebuilding an occupied Japan. The Japanese economy was in shambles and food shortages were common. Even rarer were sugary sweets. The sweet treats from the U.S. that the Americans handed out were a memorable luxury to a people still recovering from the ravages of war. 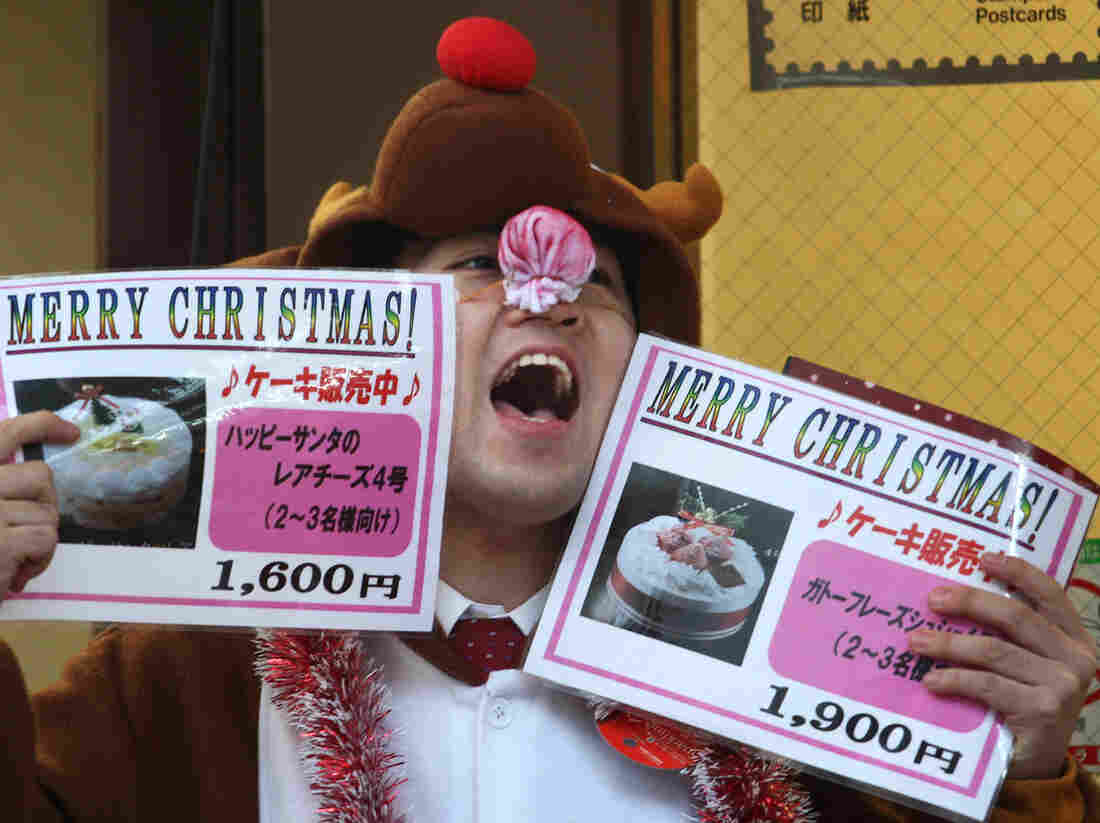 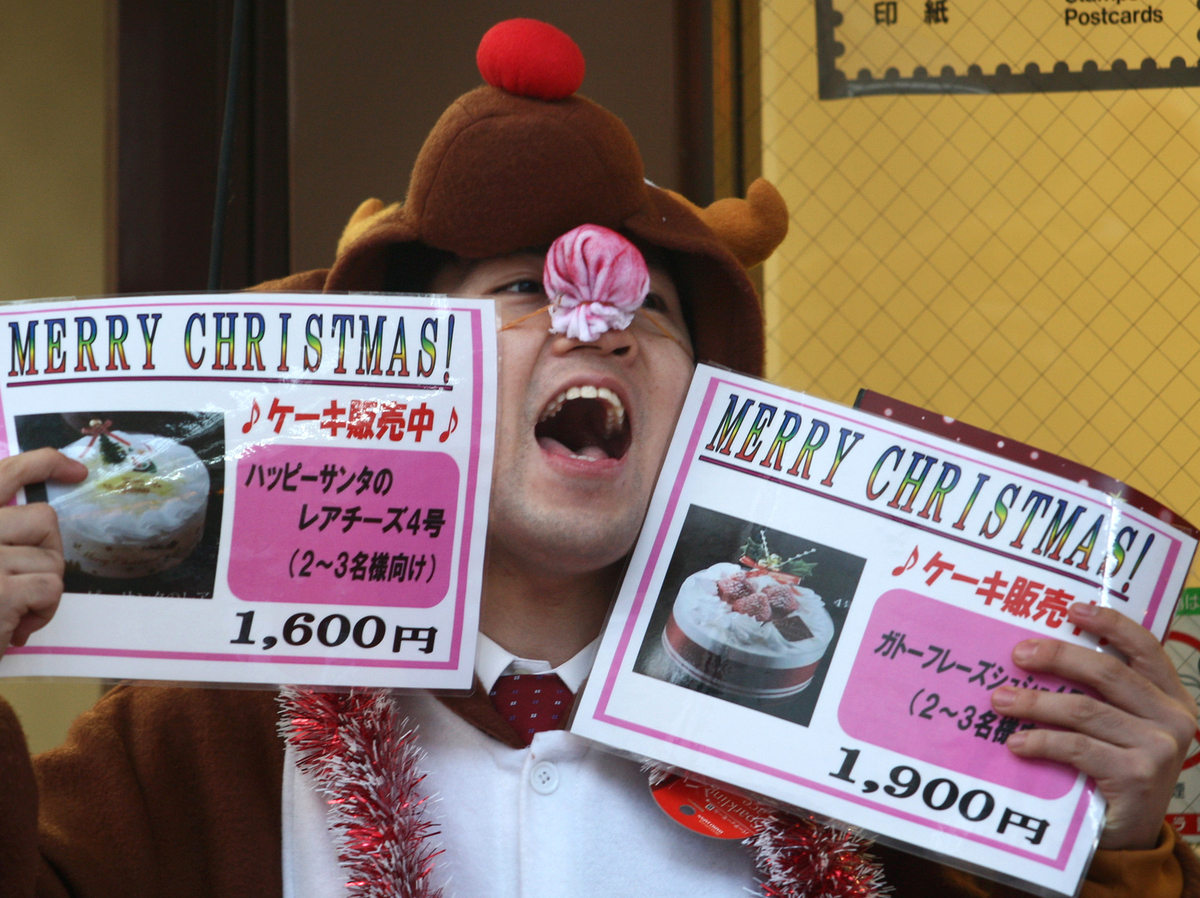 A man in a reindeer costume hawks Christmas cake outside a bakery in Kobe, Japan, Dec. 23, 2011.

"Sweet chocolates, above all, given by American soldiers epitomized the utmost wealth Japanese children saw in American lives," cultural anthropologist Hideyo Konagaya wrote in a 2001 paper on the history of the Christmas cake published in the Journal of Popular Culture. Sweets fed a longing for wealth and a desire to Americanize, he says.

But it wasn't just soldiers that came to Japan. Christian missionaries also made the journey, bringing gifts and the concept of Christmas to Japanese schools and families. Missionaries had actually introduced Christianity to Japan as early as the 16th century. But Christmas didn't catch on as a popular holiday until the postwar years, when the Japanese embraced a glitzy, commercial version of the holiday that was less about religion than about prosperity, explains Konagaya.

"The Christmas celebrations gave the Japanese the most tangible pictures that could convey images of prosperous modern lives in America," Konagaya writes.

And so Japan embraced the trappings of a picture-perfect, American-style Christmas — including Santa Claus, an ornament-bedecked tree and a sugar-filled cake. As David Plath, a renowned Japan scholar, writes in a paper on the popularity of Christmas festivities in Japan, "Family Christmas gatherings do not center around dinner, as in the American ideal, but rather upon mutual partaking of a Christmas cake."

Well, sponge cake had been available in Japan since the 17th century, but several of the items needed to make this version of it — sugar, milk and butter — were rarities on the island nation, so the cake was a luxury reserved for the elite. After World War II, Japan's economy rebounded, the ingredients became more widely available, and Japan's newly formed middle class adopted this once-exclusive dessert as a symbol that it had finally made it. 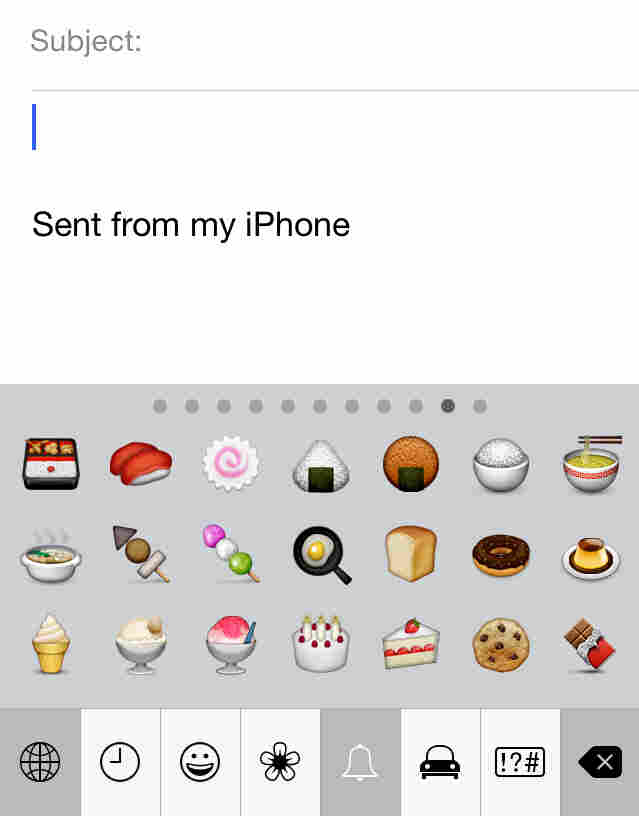 Japanese Christmas cake: It's even in your smartphone, on the emoji keyboard. NPR hide caption 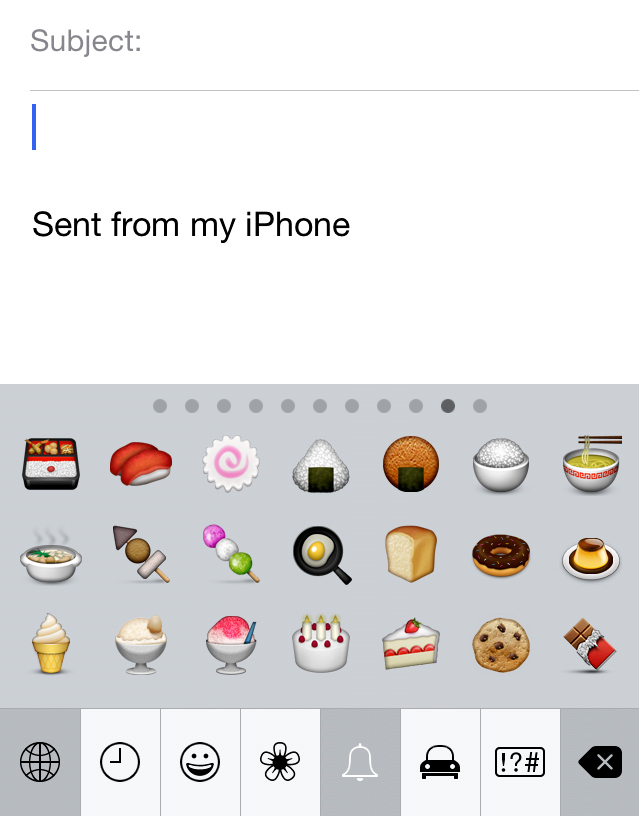 Japanese Christmas cake: It's even in your smartphone, on the emoji keyboard.

And so, inspired by America, a wholly Japanese tradition was born. "The Christmas cake became a center of attention in the whole festival [of Christmas]," writes Konagaya.

Even the cake's shape and colors are symbolic: It's red and white, echoing the Japanese flag. And traditionally it's round. "Anything that's white and round would normally be associated with shrines," says Ashkenazi.

These days, Christmas cake has become so ingrained in Japanese culture that you can even find some in your smartphone: There are two versions of the cake on the emoji keyboard. (Emoji, as the name suggests, originated in Japan.) The cakes go on discount once Dec. 25 rolls around — a fact that gave birth to an unfortunate bit of old Japanese slang: "Christmas cake" was used to refer to an unmarried woman who was over 25 and thus, considered past her prime. (Sigh. We know.)

However, while the cake has become firmly entrenched in Japanese culture, Christmas itself hasn't — it's not a national holiday in Japan. In fact, it's celebrated more like Valentine's Day is in America, and it's often thought of as a day for romantic couples to share. (It's also a big day for chowing down on KFC, but that's an entirely different story.)

Says Ashkenazi: "This [cake] is part of a whole complex of things that the Japanese adopted from the West, modified to their own needs, and have completely different meaning and different implications for Japanese society than from whatever host society they borrowed it from."

We haven't tried whipping up a Christmas cake ourselves, but if you're curious, this video from a Japanese cooking show called Cooking With Dog has a recipe. Because nothing says Christmas like a dog sous chef in a Santa hat.

Alison Bruzek is a former intern with NPR.