Accessibility links
What The Change In U.S.-Cuba Relations Might Mean For Food : The Salt The decision to normalize relations is driving all kinds of speculation about American food companies opening up shop in Cuba. But analysts say: Don't expect to see McDonald's there anytime soon.

What The Change In U.S.-Cuba Relations Might Mean For Food

What The Change In U.S.-Cuba Relations Might Mean For Food 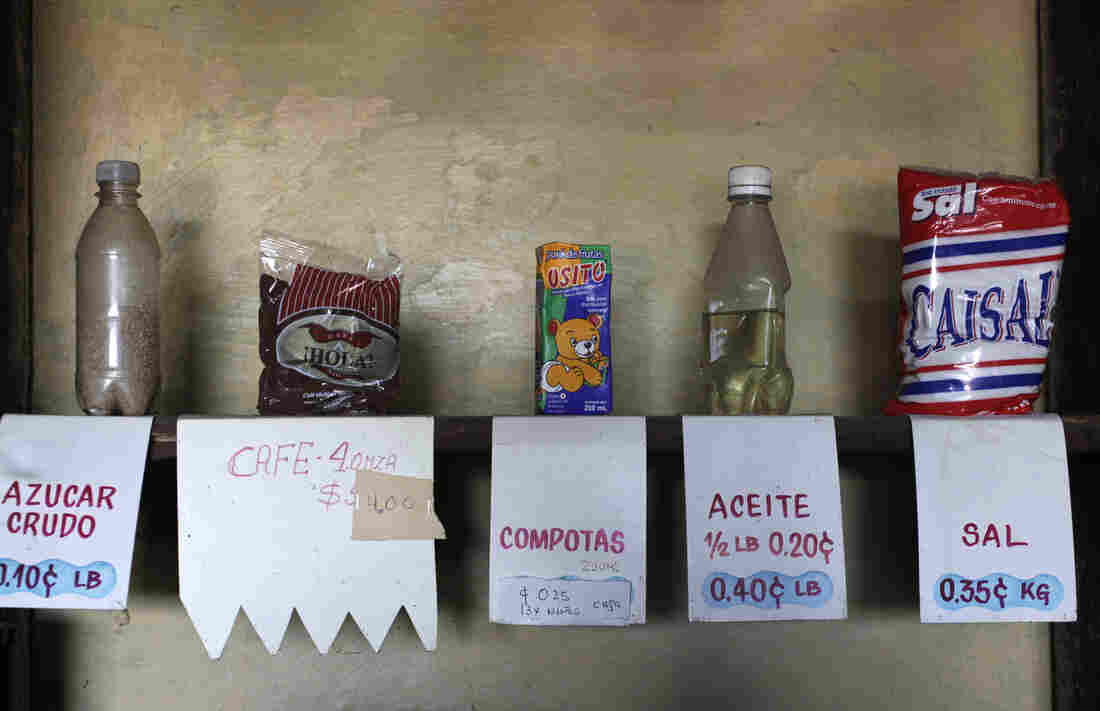 Sugar, coffee, fruit juice for babies, oil and salt inside a market subsidized by the government in Havana on July 11, 2013. Enrique De La Osa/Reuters/Landov hide caption 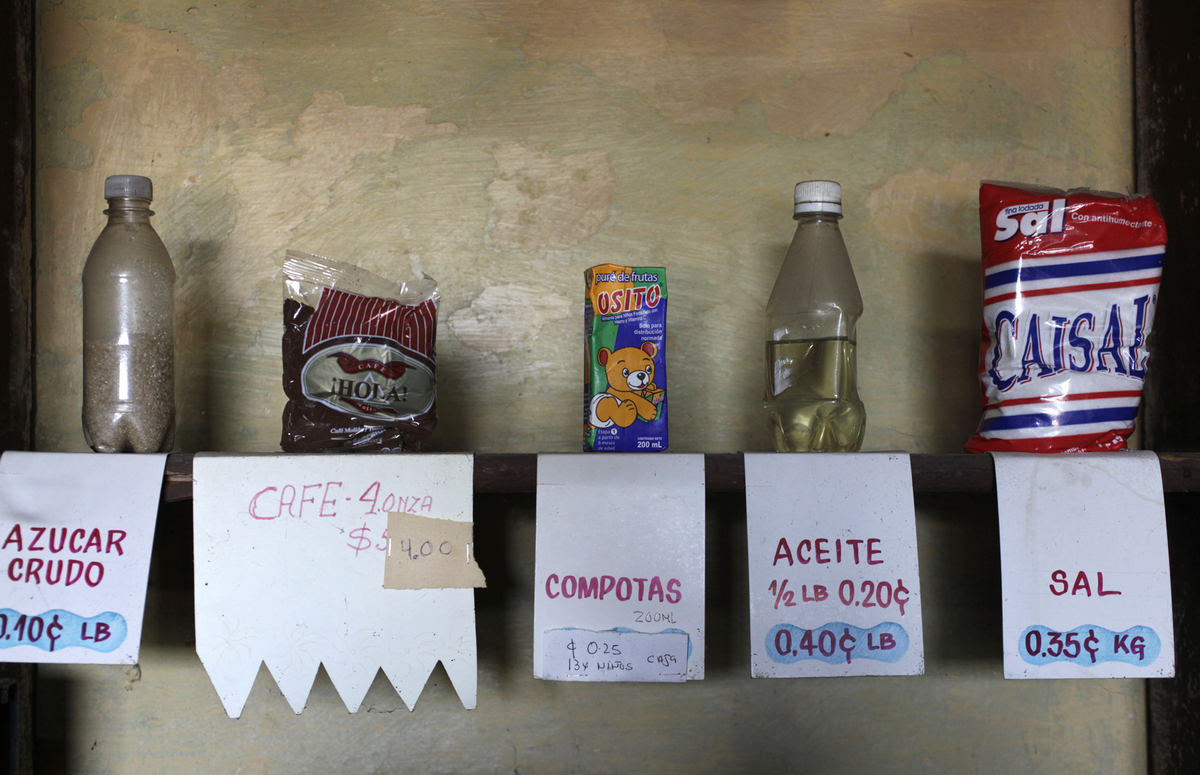 Sugar, coffee, fruit juice for babies, oil and salt inside a market subsidized by the government in Havana on July 11, 2013.

It took a few hours for some Cubans to realize the magnitude of President Obama's announcement on Wednesday about changes in the relationship between the U.S. and Cuba, according to Cuban blogger Yoani Sánchez.

Why? Because they were at the market, buying fish. "It is important to also say that the news had fierce competition, like the arrival of fish to the rationed market, after years of disappearance," wrote Sanchez, who is perhaps the most celebrated dissident on the island.

As you've probably heard — or seen, if you've traveled to Cuba — food (and, at times, the lack thereof) remains one of the most striking emblems of Cuba's dysfunctional economic system. Let's just say that the agreement between Obama and Cuban President Raul Castro will probably eventually mean big changes for the food supply in Cuba.

But if you're picturing Cubans sipping Frappuccinos at Starbucks in Havana, or a Carnival cruise ship full of American tourists unloading in the port and filing into a gleaming new McDonald's, hold your horses. Such massive changes are, in theory, more possible than they were on Tuesday, but not before our two governments work out a huge number of issues embedded in our super complex trade relationship, analysts say.

Obama and Castro's speeches were significant and expansive, says John Kavulich, president of the U.S.-Cuba Trade and Economic Council, but "the details are what matter. What people tend to forget is it's not what the U.S. wants to do to or for Cuba. It's about what Cuba feels is in its interest."

Most Cubans depend on monthly rations (limited amounts of deeply subsidized food) of rice, beans, coffee and a few other staple foods for their sustenance. There's also a thriving black market for food, supplying the wealthy and the foreigners with gourmet items like blue cheese and smoked salmon smuggled in by suitcase. (I traveled to Cuba in 2003 and 2007, first on a person-to-person license and then on a freelance journalist visa. Like so many other American visitors, I was utterly bewitched by the people, the music, the rum. But I lost weight there — probably because candy bars and other snacks were so hard to come by.)

Of course, Cuba is far more food secure than many of its similarly impoverished neighbors in Latin America like Honduras and Haiti. But animal (and fish) protein is in extremely limited supply, and to buy food, Cubans have to wrestle with a "jigsaw puzzle" — different markets and currencies for different food products.

Cuba imports about 80 percent of its food, according to the World Food Program. That costs the government $2 billion a year, and since 2000, a solid chunk of the imports have come from the U.S. In 2013, American firms sold $348 million worth of agricultural goods to Cuba, according to the U.S.-Cuba Trade and Economic Council. The top three products? Frozen chicken, soybean meal (for animal feed) and corn.

Wednesday's announcement was not the end of the embargo, of course. But Obama's new approach to Cuba includes "expanded sales and exports of certain goods and services from the U.S. to Cuba." That includes agricultural products, from commodities like rice and beans to butter. 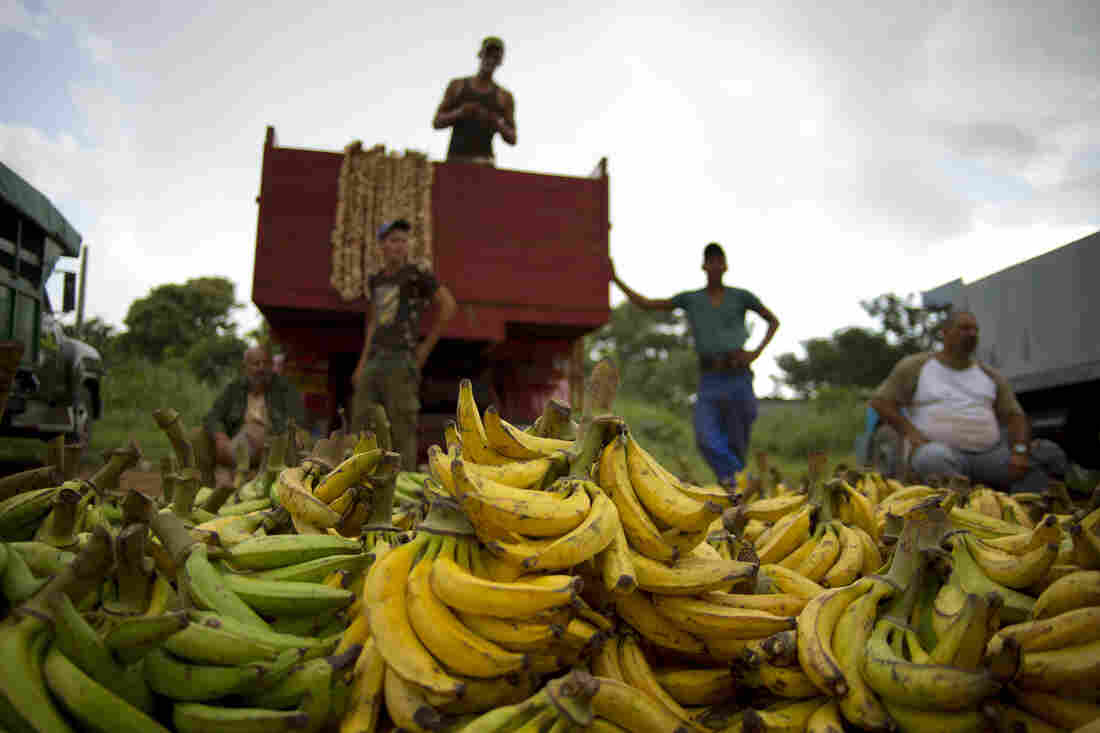 Banana growers at a market on the outskirts of Havana, Cuba, on Sept. 30, 2013. Cuba currently imports few fruits and vegetables from the U.S., but the American Farm Bureau says the change in relations may allow for new trade opportunities. Ramon Espinosa/AP hide caption 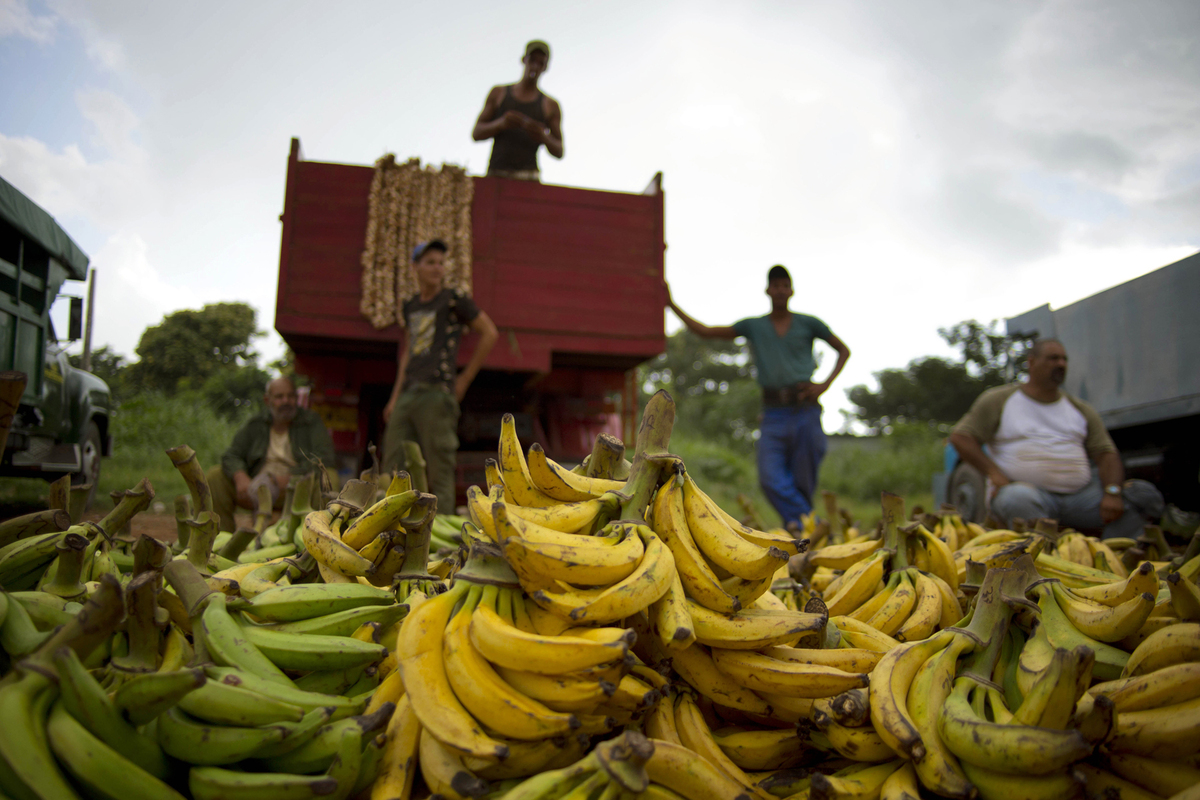 Banana growers at a market on the outskirts of Havana, Cuba, on Sept. 30, 2013. Cuba currently imports few fruits and vegetables from the U.S., but the American Farm Bureau says the change in relations may allow for new trade opportunities.

And for U.S. agricultural producers, the most important part of Wednesday's announcement was Obama's call to lift restrictions on financial transactions for food products, says David Salmonsen, a trade specialist with the American Farm Bureau.

Currently, any agricultural producer who wants to sell to Cuba has to get cash upfront from the Cuban government before shipping, and the money exchange must be handled through a third-party bank, which means all kinds of extra transaction costs.

If the Treasury Department and Commerce Department go along with Obama's order, then those producers will now be able to do business more directly with the Cuban government and its banks, says Salmonsen.

Without those extra transaction costs, certain U.S. producers that don't currently sell to Cuba — like fruit and vegetables producers — may finally be able to offer the Cuban government a competitive price. Or rice from the Southeast U.S.: Cuba used to buy it, until we were out-competed by Brazil and Vietnam.

Cargill, for one, says it's optimistic about the opportunities. So is the American Soybean Association.

"Depending on how it develops, it could put our producers back into a more normal trading relationship with Cuba, so that the whole supply chain evolves, and demand rises as barriers are reduced and eliminated," says Salmonsen.

But as Kavulich points out, food isn't necessarily Cuba's biggest priority: Investments in infrastructure may be more desperately needed.

Still, "there are opportunities" for food companies, he says, but what happens when the "Cubans say, 'That's all well and good, but we need help with financing?' The risk of doing business with the Cuban government is huge."

Cuba's government has considerable trade deficits with other nations, but little with the U.S. If American businesses want to sell more to Cuba, they might find themselves waiting a while to get paid, he says.

The big trade picture aside, the outlook for Cuban cuisine is also a bit murky. As I reported in 2012, Cuban chefs haven't been able to incorporate many modern cooking techniques, or exotic ingredients. (I don't think sous vides machines can get past the embargo.) So chefs may have to wait a while before they can import some of the American ingredients they covet.

As Sanchez wrote, Wednesday's announcement "is just the beginning." It's tempting to get excited about the future of Cuban food, but "keep the corks in the bottles," she says.