Accessibility links
In Wineries Vs. Weather, Drones To The Rescue? : The Salt Rising temperatures have hastened harvest dates in Sonoma County — and they're changing grape-growing patterns around the world. Vineyards are responding with everything from sunscreen to sensors. 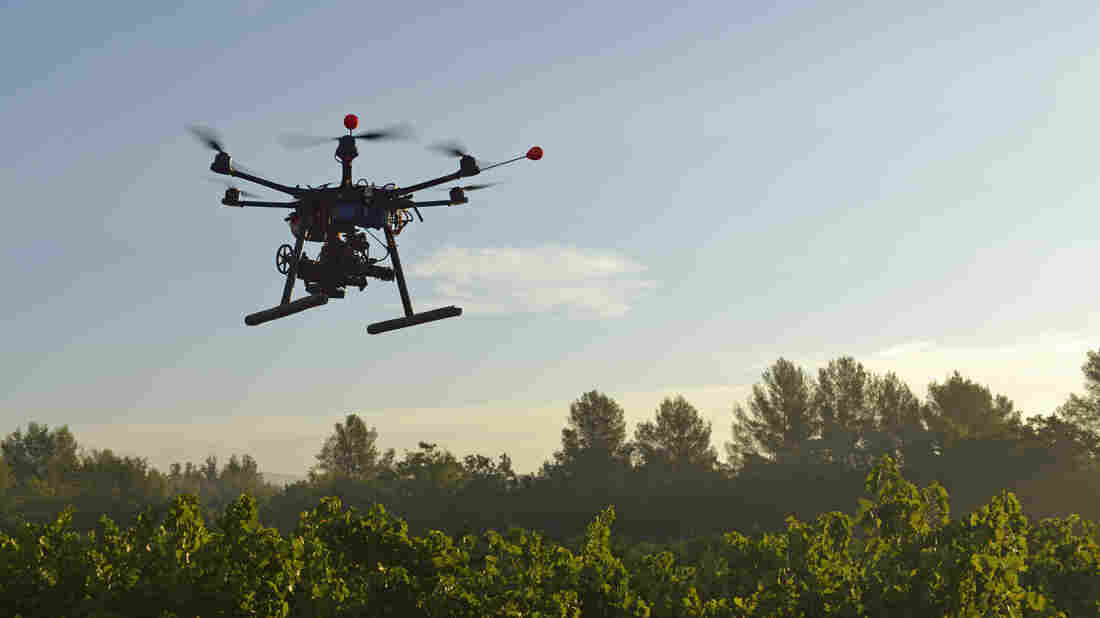 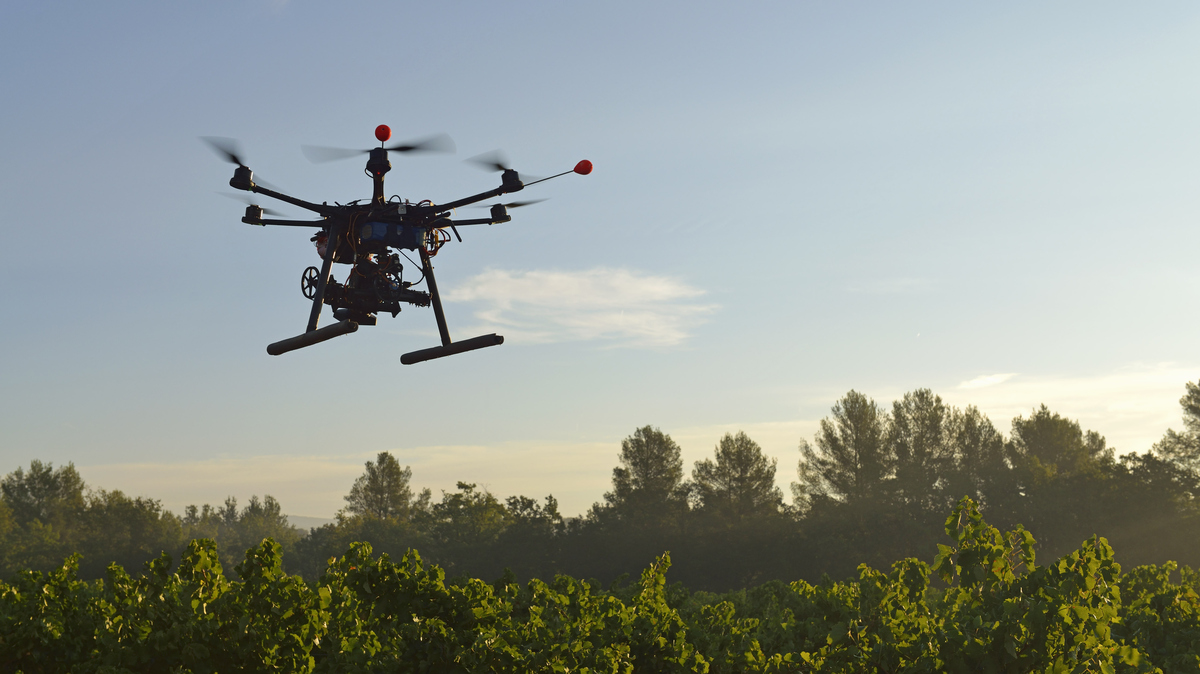 An unmanned aerial vehicle films vineyards in France. Drones like this one are also being used in Califiornia, as part of a broader "precision farming" movement designed to lower greenhouse gas emissions.

Tucked behind a hill in Sebastopol, Calif., with a 5,400-square-foot cave that holds some 500 barrels of wine, DRNK Wines exudes the quiet charm that a visitor might expect. But the grapes in some of the wines that are sold here are under a growing threat — which is why DRNK's winemaker, Ryan Kunde, can sometimes be seen in various vineyards testing his fleet of drones. Their mission? To one day collect aerial images that will help determine the vines' vigor, ripeness, flavor and harvest dates, which due to rising soil temperatures have inched up in Sonoma County over the past few years.

Welcome to wineries versus weather: the global warming edition, where flying drones in the Russian River Valley are just the beginning of a worldwide response to shifting patterns in grape growing and harvesting for our sipping pleasure. Winemakers, of course, have plenty on the line — a nearly $292 billion industry — as experts warn that rising temperatures and declining rainfall could threaten renowned regions such as Bordeaux and the Rhone Valley in France as well as Tuscany in Italy.

Many other areas are also feeling the heat. By 2050, some 60 percent of the vineyards sprinkled across California could become unsuitable for wine production, while 68 percent of those in Mediterranean Europe and up to 73 percent in Australia could be in trouble, warns a report published in the Proceedings of the National Academy of Sciences, a scientific journal.

To cool their concerns, winemakers are enlisting the help of everything from a special sunscreen for grapes and pre-heat-wave microsprays to sensors that can be controlled remotely for smarter farming. Some have even established "test vineyards" to analyze the effects of warmer, drier climates, while others are turning to labs that are working on genetically modified grapes that will (they hope) withstand hotter temperatures and protect future pours of Pinot.

Then there's Kunde, who's tackling global warming head-on. He analyzes aerial images from his fleet of drones as part of a broader "precision farming" movement to determine where he can reduce the amount of fertilizer, water or energy that is used to grow grapes — which, Kunde argues, would lower greenhouse gas emissions and help "slow the rate of climate change."

From grape sunscreen to remote-control sensors, wineries are combating climate change with some nifty tech.

Some experts argue that many of these proposed solutions are merely reactionary and not preventive, which could just be delaying the inevitable. Others, including Paul Verdegaal, a farm adviser at the University of California Cooperative Extension in San Joaquin County, argue that many vineyards aren't seeing weather changes that are significant enough to cause major damage.

Indeed, warmer temps aren't hurting the entire industry: While the wine industry has shrunk 1.9 percent each year from 2009 to 2014 on mainland Australia, it has grown nearly 10 percent annually in Tasmania. Other promising locales that are attracting more grape growers and vintners include Northern Europe and China.

Even so, scientists continue to work at some of this industry's challenges, some with government funding and others as private consultants. Researchers at the multinational Vineyard of the Future (no, we didn't make that up) recently discovered that cooling vines during heat waves can prevent cells inside a berry from dying. A team led by Stephen Tyerman, who oversees the vineyard and is a professor of viticulture at the University of Adelaide, uses near-infrared sensors to scan their 2.4-acre vineyard. The sensors find hot spots and study how much water must be applied to the fruit at any given time, and they can be monitored remotely, too.

Grapevines, it turns out, are sort of like canaries in a coal mine. They're extremely sensitive to warming trends; and in places like Australia, their buds have been bursting earlier each year — making it "a logistical nightmare to get the berries into the winery fast enough since they are rotting so quickly," says Tyerman.

Crusaders against climate change like Tyerman are emerging world over. Variations of the Vineyard of the Future have sprouted up at universities in Melbourne, Spain and Chile, and some major U.S. winegrowers, such as E. & J. Gallo Winery (which declined to comment), are involved in the project. In Australia's Barossa Valley, Michael McCarthy from the South Australian Research and Development Institute has created a collection of 16 shelters that simulate reduced rainfall conditions beyond 2030. And Antonio Busalacchi, a sommelier, climatologist at the University of Maryland and consultant, meets with wineries to discuss smarter canopy management and protective options, such as netting or shading grapes. Individually, of course, these tactics may not work. But the only thing worse than sour grapes, perhaps, is not having any at all.