Accessibility links
A History Lesson On The Philippines, Stuffed In A Christmas Chicken : The Salt Rellenong manok is a deboned chicken filled with a jumble of ingredients. If it seems hard to pin down how this dish got all its fillings, it's because of the complexity of the Philippines' culture. 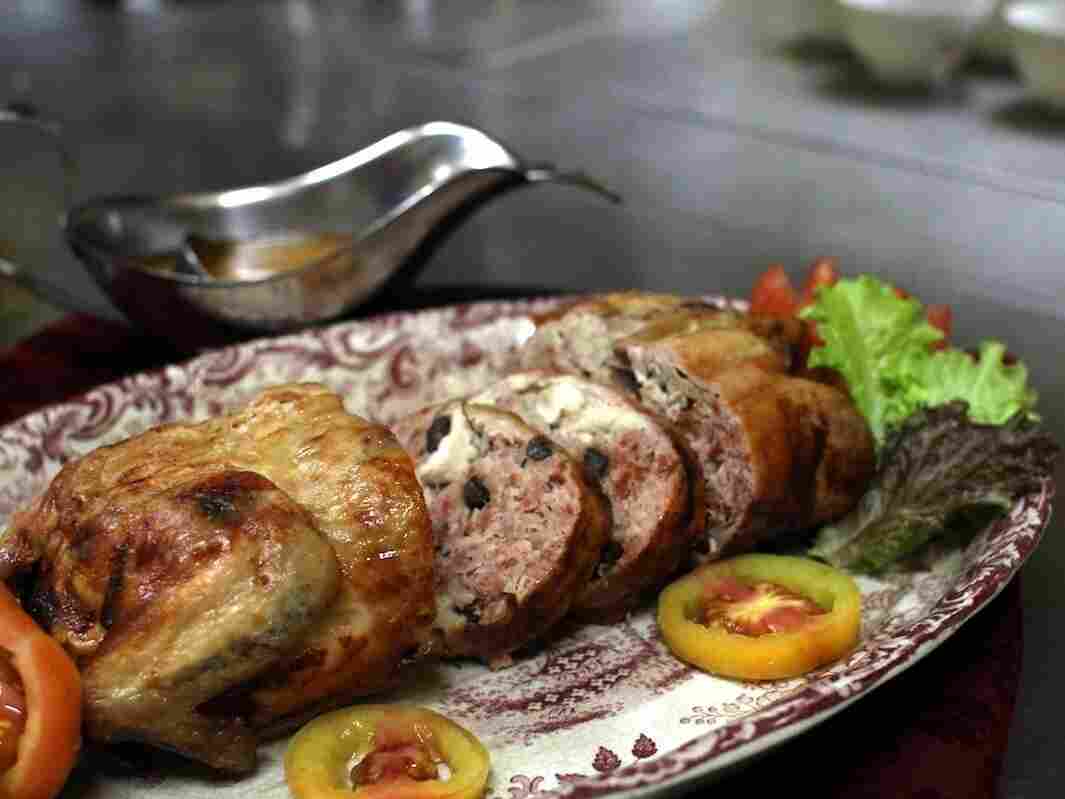 The rellenong manok at La Cocina de Tita Moning, a restaurant in Manila. Chef Suzette Montinola uses a traditional recipe from the 1930s that belonged to her grandmother. Aurora Almendral for NPR hide caption 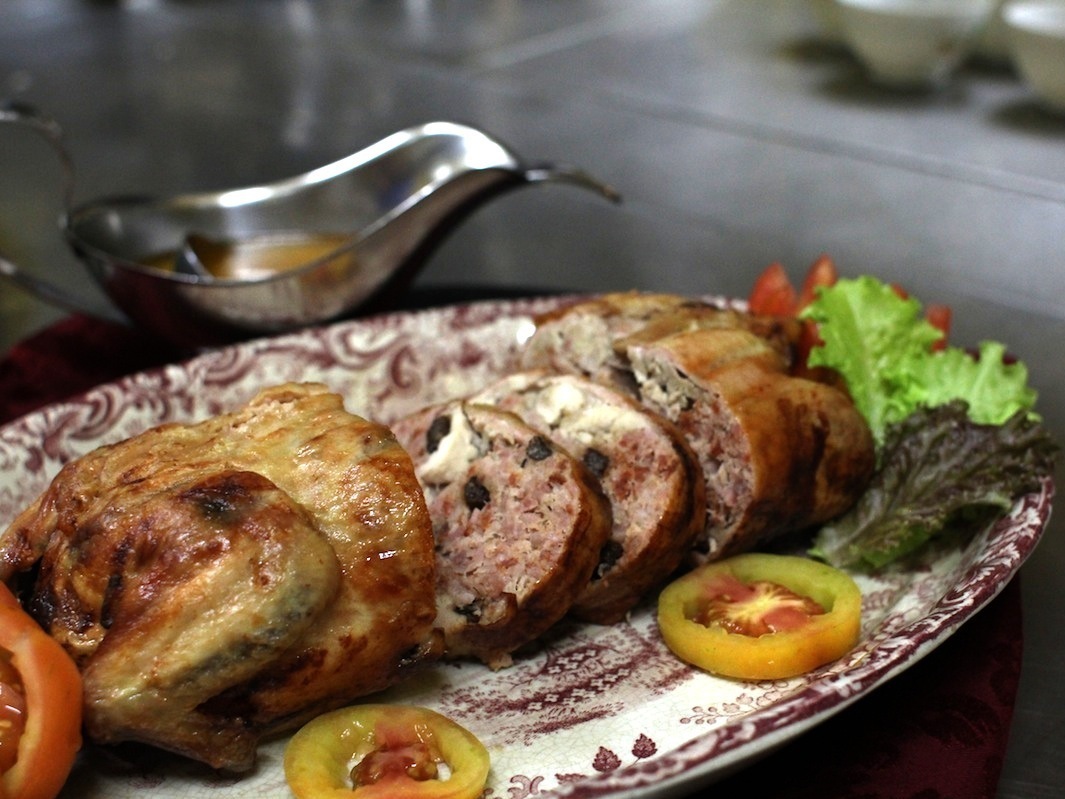 The rellenong manok at La Cocina de Tita Moning, a restaurant in Manila. Chef Suzette Montinola uses a traditional recipe from the 1930s that belonged to her grandmother.

Noche buena, the Christmas Eve feast in fervently Catholic Philippines, is deeply steeped in tradition. One of the mainstays of this decadent meal, usually eaten after midnight mass, is rellenong manok (rel-ye-nong ma-nok). It's a hybrid name: In Spanish, relleno means stuffed, and in Tagalog, manok means chicken.

Rellenong manok is a deboned chicken or capon, filled with a jumble of ingredients that include some combination of minced pork, Edam cheese, chorizo, raisins, pine nuts, canned Vienna sausages, olives, ham, Oxford sausage, hard boiled eggs and even Spam.

Depending on a family's adherence to tradition, rellenong manok may be basted with Madeira wine, sprinkled with cinnamon and nutmeg, or washed inside and out with soy sauce and kalamansi, a tiny native Filipino citrus fruit. The chicken is then sewn up and either roasted or deep-fried, then braised.

Rellenong manok is a cherished tradition in the Philippines, and is often given as a Christmastime gift, like a nice bottle of wine, a tin of cookies or a fruitcake.

If it seems hard to pin down how this dish got these fillings, it's because of the complexity of the Philippines' culture itself. The list of ingredients reads like a map, or a history lesson, of the country's cultural influences, according to Genevieve Villamora, owner of Bad Saint, a Filipino restaurant slated to open in Washington, D.C., in 2015.

The modern rellenong manok is undoubtedly originally descended from Spain. For 400 years, the Philippines was the Spanish empire's Asian colony. Spain brought Catholicism to the islands, and Filipinos embraced the culinary traditions that came with it.

Spanish pollo relleno is similar to French galantine, but as Filipino culinary historian and author Felice Sta. Maria notes, the Spaniards' incorporation of dried fruits and nuts comes from the 900 years of Arab influence in Spain. Today, that element of rellenong manok endures as raisins and pine nuts.

Rellenong manok is a labor-intensive dish reserved for special occasions, and through the turn of the 20th century, Filipino families stuck close to Spanish tradition and stuffed their chickens with the rare, imported treats that survived the long ocean voyage from Spain: chorizo, jamón and other preserved meats, olives. Some might also add a hard, round Dutch Edam cheese coated in thick red wax, called queso de bola in the Philippines.

As colonial ties shifted, so did the ingredients for rellenong manok. In 1898, at the end of the Spanish-American War, Spain ceded the last of its colonies, including the Philippines, to the U.S. It became the only official colony of the U.S., and American influence on Filipino culture began to overtake Europe's.

"The United States considered the Philippines as an additional market for their goods," Sta. Maria tells The Salt. "And if you look at the products that were imported, all the big American brands were here, and they were bringing in canned meats, canned vegetables, which were beginning to compete with these European brands that had already established themselves."

Seduced by novelty and convenience, Filipinos were eager to try American industrial foods like canned Vienna sausages and Spam. After World War II, with Europe in shambles, and the population living on rations, imports of the European meats that traditionally filled rellenong manok dried up, and Filipinos turned to American processed meats to fill the gap.

Despite leaving a strong imprint on rellenong manok, Sta. Maria says, the American culinary influence in the Philippines is now on the decline. "The U.S. is having such a hard time competing with goods from other countries, plus Filipino companies are making their own versions of American products ... tweaking them for the Filipino taste," she says.

These days, as far as Filipinos are concerned, rellenong manok isn't an import from Spain, it's Filipino. Which is why more than 100 years after Spain left the Philippines, the tradition of a Christmastime chicken is still going strong.

"It's not just comfort [food], it's your role ... to continue these food traditions. It wouldn't be Christmas without them," says Sta. Maria, "and this continues over generations for as long as those traditions can market themselves and convince each new generation that it tastes good, it looks good, it's part of us. You can't take it away from us. If you take it away from us we're not us."

Still, it is just one of several Christmas traditions in the Philippines. Many families eat roast pig and festive sticky rice — to celebrate the rice harvest, a tradition that predates even the Spanish.

Aurora Almendral is a journalist in Manila.