Accessibility links
In Slovakia, Christmas Dinner Starts In The Bathtub : The Salt Christmas carp is a holiday mainstay in many central European nations. Traditionally, it swims in the family tub for a day or two, sometimes becoming a sort of pet before it ends up on the plate. 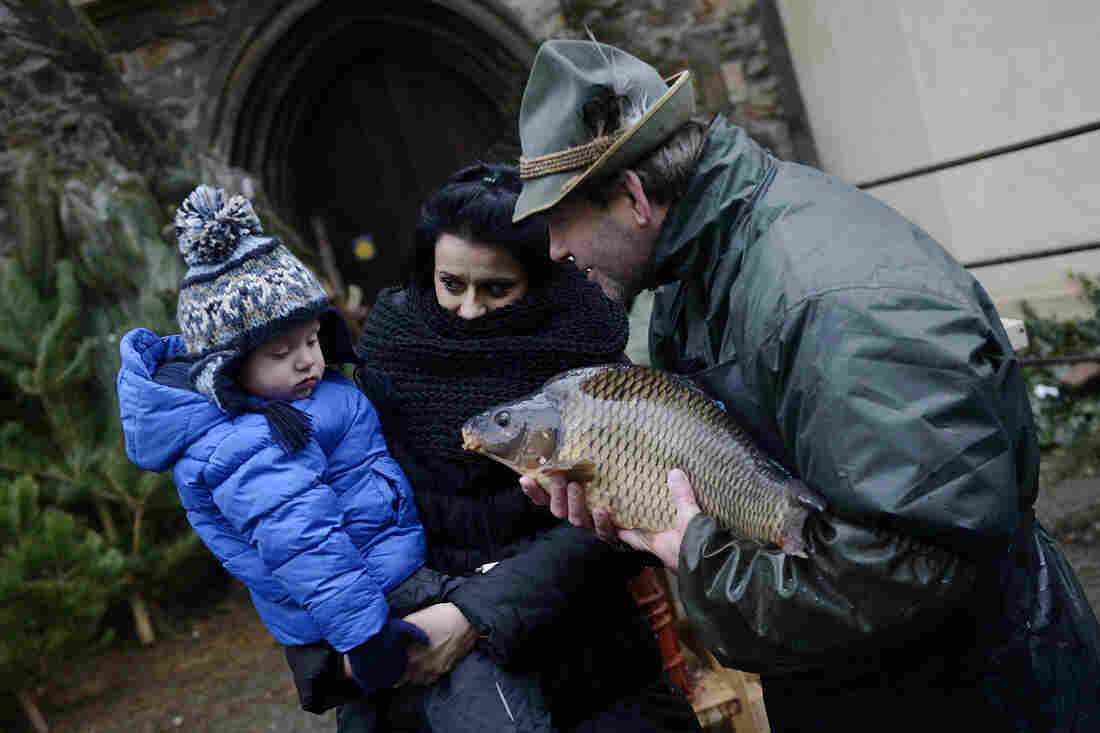 Carp is a holiday mainstay in several central European nations. Traditionally kept in the bathtub, the fish can become a sort of family pet for a day or two, before becoming dinner. Here, a street vendor shows a carp to customers in downtown Prague in December 2012. Filip Singer/EPA/Corbis hide caption 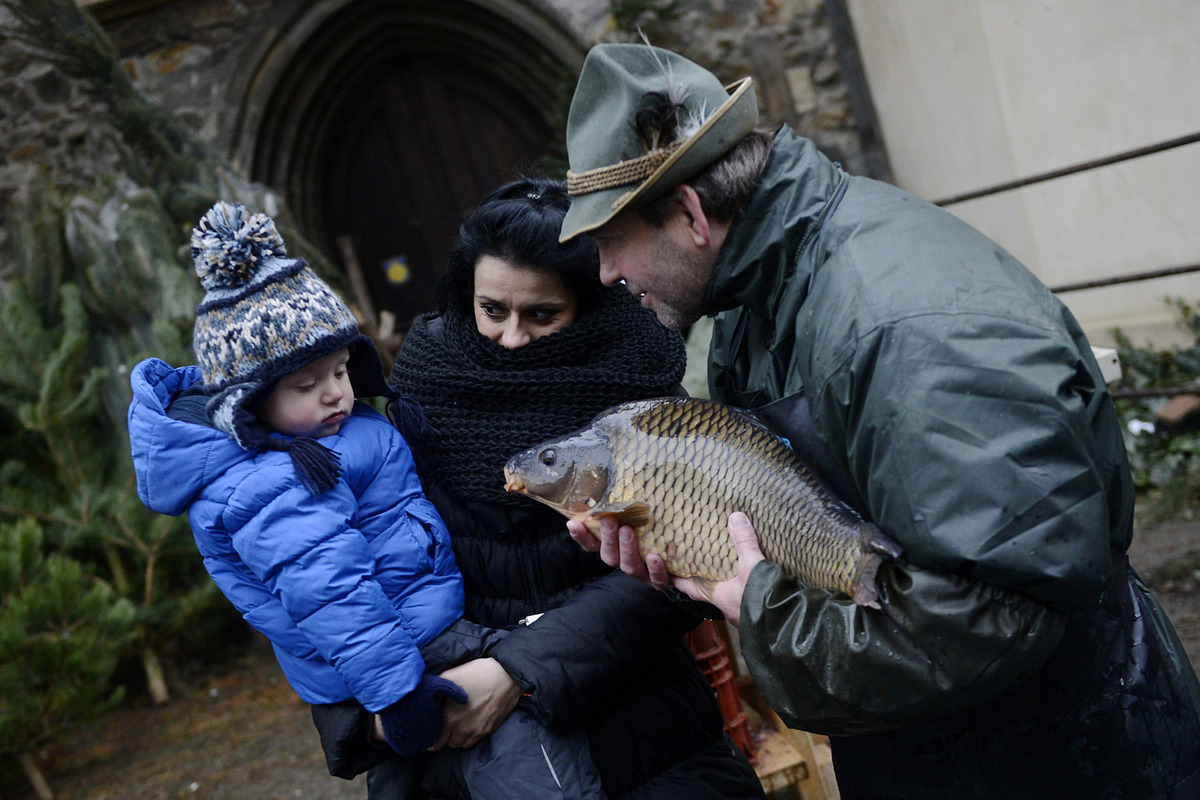 Carp is a holiday mainstay in several central European nations. Traditionally kept in the bathtub, the fish can become a sort of family pet for a day or two, before becoming dinner. Here, a street vendor shows a carp to customers in downtown Prague in December 2012.

For centuries, families throughout much of central Europe have relied on one simple main course for Christmas Eve dinner: the common carp.

But getting from river (or carp farm) to table is not so simple. As the tradition goes, the Christmas carp must first swim in the family bathtub for at least a day or two before being killed, cleaned and prepared.

I grew up in Maine and Massachusetts and, I will admit — back before my mom decided she couldn't bear dropping a live lobster into a boiling pot — there was more than one occasion in which my siblings and I took the crustaceans out of the bag and attempted to race them across the kitchen floor before they became dinner.

But in Slovakia — and other nearby nations, including Poland, the Czech Republic, Austria, Germany and Croatia — the fish actually live in the bathtub for days. Kids name them. People can't bathe.

"In my childhood, I remember thinking 'poor carp,' " Bratislava resident Mima Halokova tells me. Others admit to actually letting the fish go free, unable to go through with their plans to transform it into dinner.

Carp are bottom feeders. The idea is that a few days swimming in clean water helps to flush mud from the fish's digestive tract. (It would actually take a lot longer than that for this trick to work, fisheries scientist Patrick Cooney tells us. He's tried it.) Some note that the tub time was a practical way to store fresh fish before refrigerators became common.

Bathtub carp is one of several traditions tied to Christmas Eve — a day that is the centerpiece of holiday celebrations for Slovaks and some others in central Europe. It is also the day, children are told, when baby Jesus brings a Christmas tree. (This requires some elaborate subterfuge from parents, who must hide and decorate the tree behind closed doors.) Later in the day, the little ones get their gifts.

And as magically as the fully decorated Christmas tree appears, the pet carp's life not-so-magically ends. Traditionally, the father takes the live fish from the family tub and, in most cases, slices its head off with a knife. It can be more difficult than it sounds.

"These are strong fish that move quickly," says Matt Yoder, an American teaching at an international school in Bratislava. Yoder, whose wife is Slovak, explained that many times, it is necessary to first stun the fish with a mallet or a baton.

These days, at least in Slovakia's capital city, more and more people are deciding to buy the fish ready to cook from a fishmonger, rather than worrying about the potentially messy job of killing it at home. 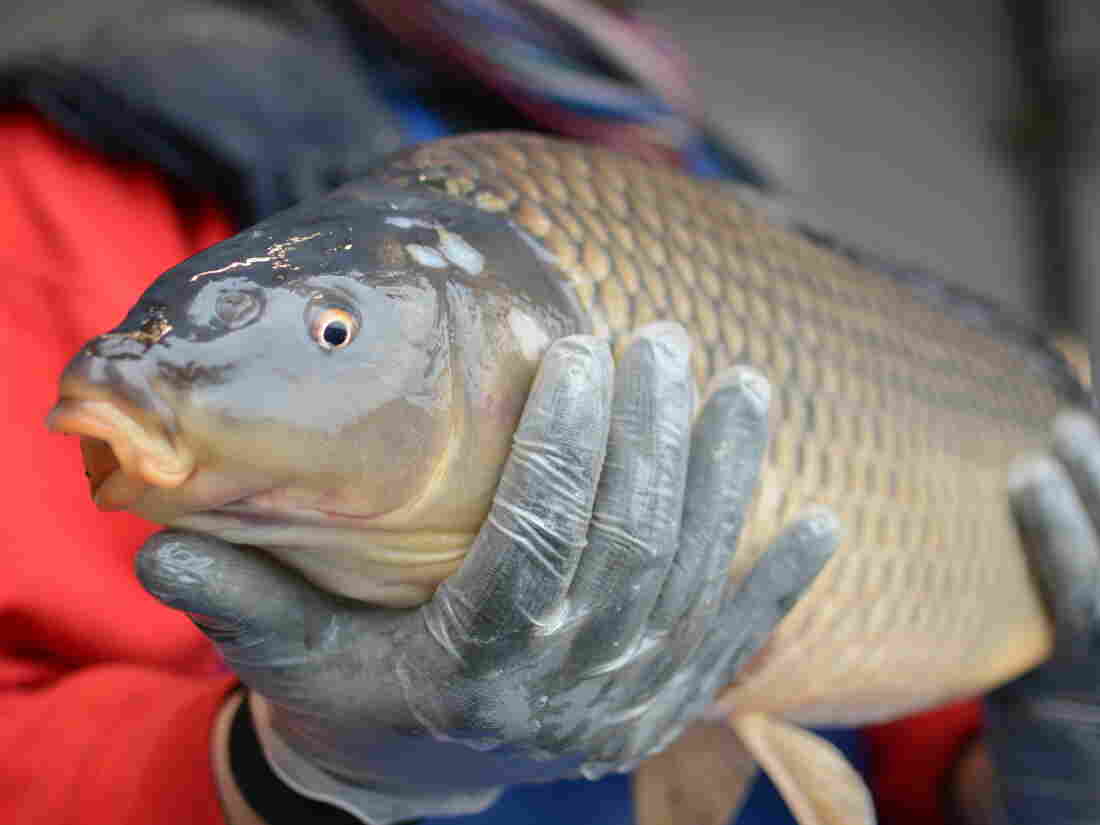 This guy is about to become someone's Christmas dinner. But probably not before he swims around the family bathtub for a couple of days. Meghan Collins Sullivan for NPR hide caption 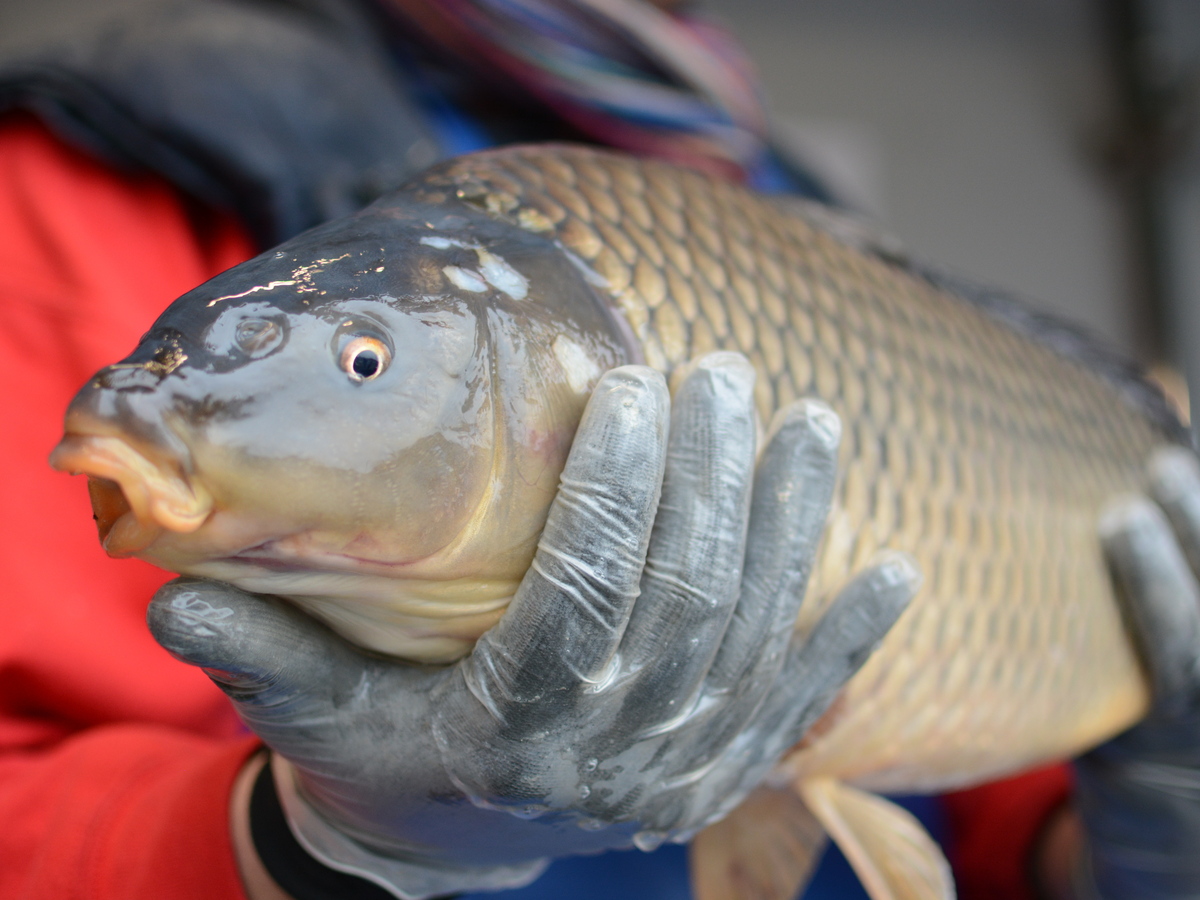 This guy is about to become someone's Christmas dinner. But probably not before he swims around the family bathtub for a couple of days.

Once the fish has been killed, it is cleaned, then soaked in milk (and sometimes salt) to dull the smell, lessen the "fishy" taste and sweeten the meat. It is sliced top to bottom, creating pieces in the shape of horseshoes, intended to bring good luck. Legend has it that the carp itself brings luck, too, one of the reasons it is said to have become the Christmas meal of choice. Fish has long been a symbol of Christ and Christianity.

The carp is usually served breaded and fried. Also on the menu is a cabbage soup that generally has at least four types of meat, including sausage. Traditionally, the only other dish is potato salad. Strictly observant Catholic Slovaks prepare a vegetarian version of the soup, and fast all day before the Christmas meal. (Drinks — including spirits — are fair game.)

In Slovakia, the holiday is steeped in superstition and symbolism. The table is set with all of the foods for the feast before everyone sits down, as no one is permitted to get up during the meal. If someone leaves the table — even to go to the bathroom — it means there will be a death in the family before the next Christmas arrives. Families also set an extra place for either an unexpected visitor or a departed relative.

Once the meal ends, everyone checks under his plate to retrieve fish scales from the family carp. The scales signify luck for the year ahead, and people put them in their wallets and carry them until the following Christmas Eve.

Ask most people and they will tell you that the common carp is not a delicacy. It's fishy. It's full of little bones. Some say they only eat it on Christmas Eve because it's a tradition. A few have gone so far as to say it is "gross."

But carp crosses cultures — as does the bathtub ritual: Some European Jews have a similar tradition, as carp is often the gefilte fish eaten at Passover. And it seems that Jewish children, too, can get caught up befriending the carp in the bathtub.

Meghan Collins Sullivan is a journalist based in Bratislava, Slovakia. She is a former supervising editor at NPR and edits the 13.7 Cosmos and Culture blog.