Accessibility links
Farm Fresh? Natural? Eggs Not Always What They're Cracked Up To Be : The Salt Egg cartons these days are often plastered with an array of terms that can confuse and even mislead consumers. Here's a glossary of carton jargon for the wannabe informed egg buyer. 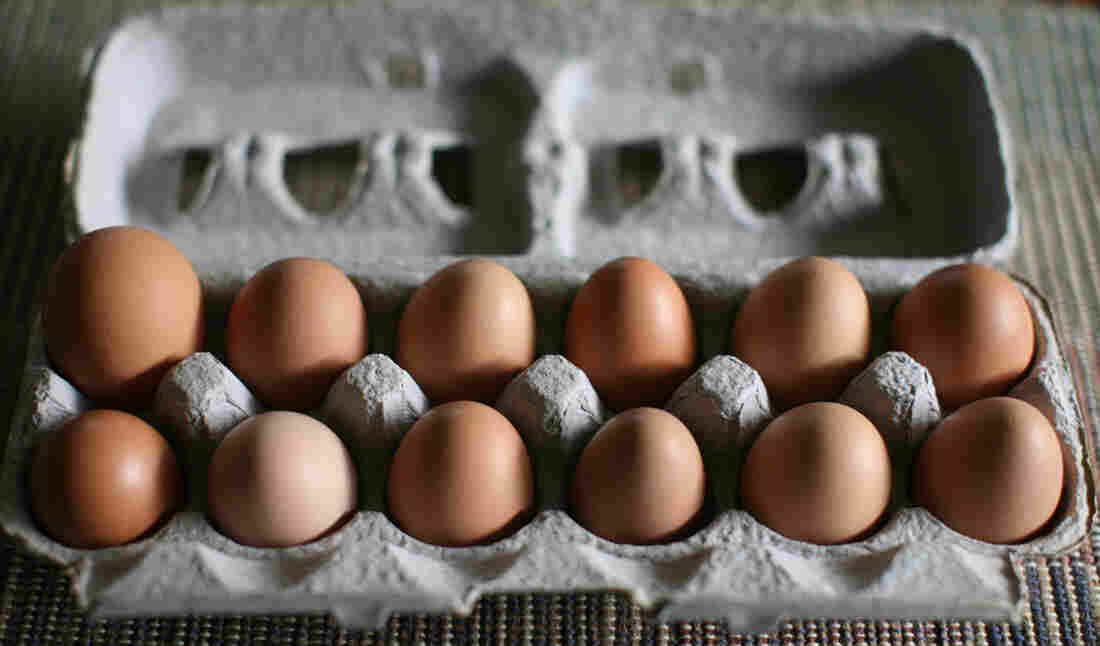 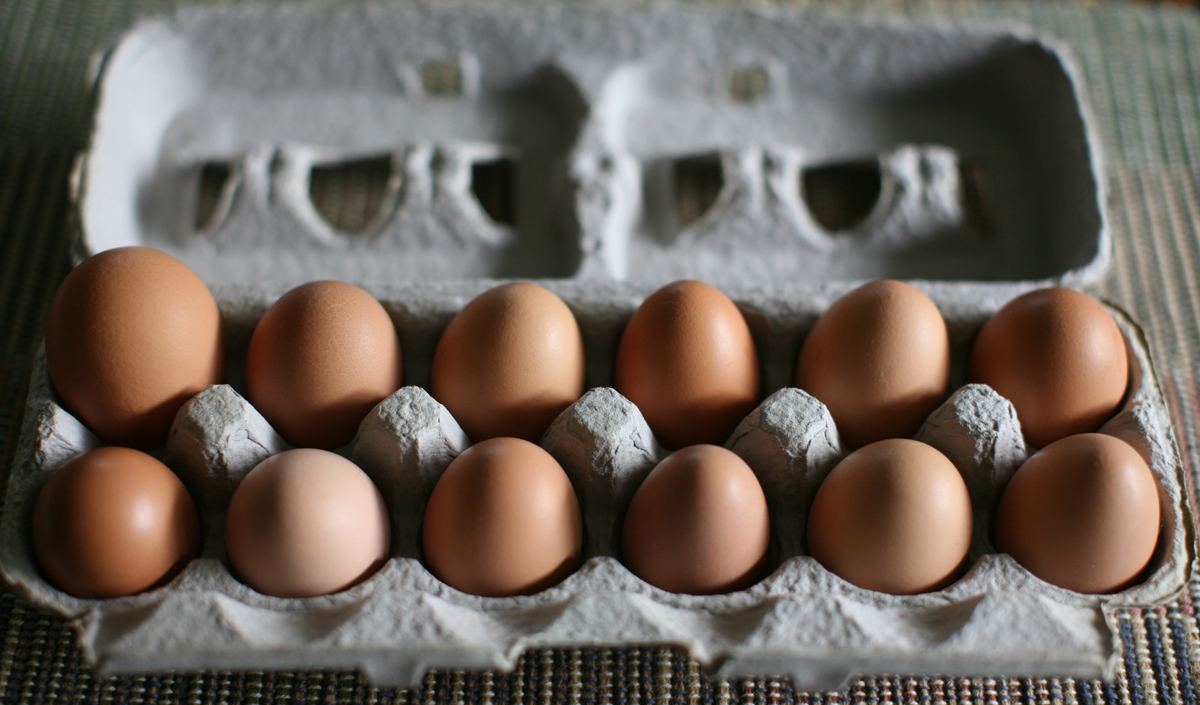 You're in the supermarket gathering ingredients for eggnog and a Christmas Bundt cake, and you're staring at a wall of egg cartons. They're plastered with terms that all sound pretty wonderful: All-Natural, Cage-Free, Free-Range, Farm Fresh, Organic, No Hormones, Omega-3. And so on.

And yet the longer you stare at them, the more confused you become. You are tired and hungry, so you just grab the cheapest one — or the one with the most adorable chicken illustration — and head for the checkout line.

This is what I've been doing ever since I moved back to the U.S. five months ago after four years abroad. Then I finally cracked. It was time to figure out what all this egg jargon actually means.

Here is the result. Consider it a glossary for the wannabe informed egg buyer.

What You Might Think It Means: Your friendly local farmer rises at dawn to harvest a dozen (still warm) eggs and puts them into this egg carton, which is rushed to your local store.

What It Actually Means: "It literally means nothing," says Paul Shapiro, vice president of the Humane Society of the U.S. and an expert on commercial egg production. He says the term is probably meant to conjure up a favorable image in the consumer's mind, but it has no substance whatsoever.

What You Might Think It Means: Chickens eating a "natural" diet and doing what chickens, you know, naturally do.

What It Actually Means: Once again, this phrase has no real meaning. Shapiro says it's an ironic term, too, "because [conventional chickens] are raised in the least natural conditions imaginable."

OK, let's pause for a minute. How exactly are most eggs in the U.S. produced?

According to the Coalition for Sustainable Egg Supply, a group that includes commercial egg producers, the U.S. Department of Agriculture and several universities, 95 percent of eggs in the U.S. come from chickens raised in something called battery cages. These cages house anywhere from four to 12 birds, giving each bird roughly 67 square inches of floor space (that's about the size of an iPad).

Come Jan. 1, though, eggs sold in California will have to come from chickens enjoying at least 116 square inches of space.

The cages are stacked in long rows, inside massive barns that usually house tens of thousands of birds. They're typically fed a mixture of corn and feed made from animal byproducts. You can see a video of one such facility here.

Commercial egg producers note that this method of production is safe and economical. It's what keeps egg prices down. 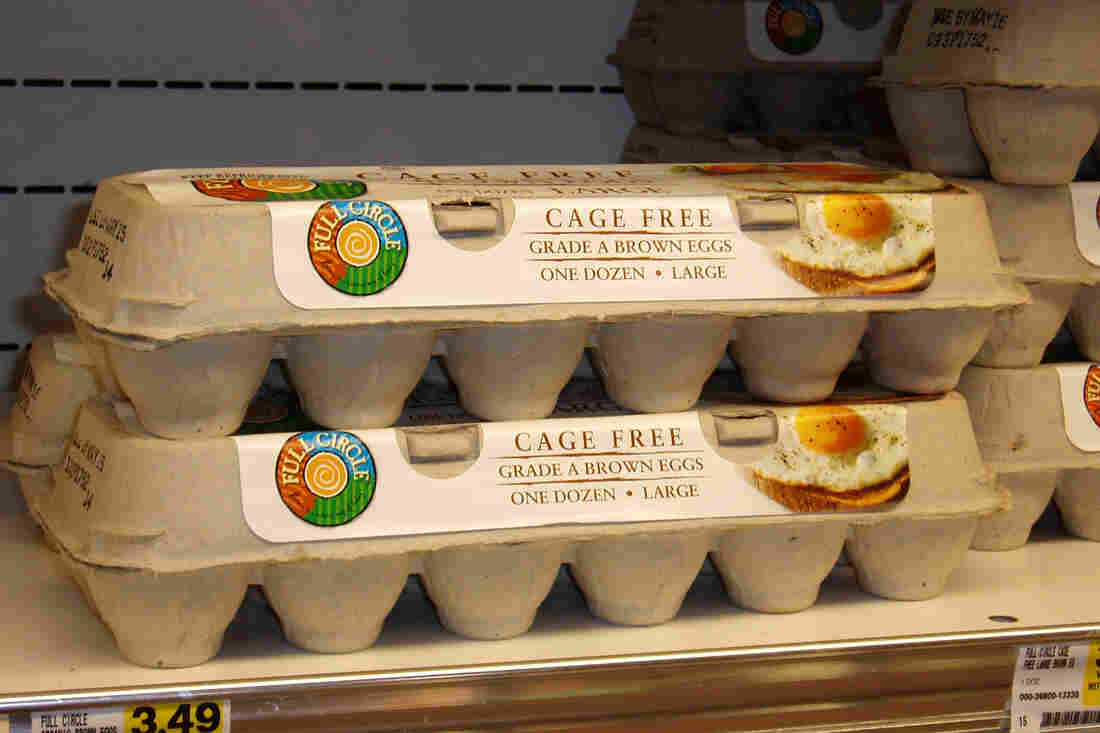 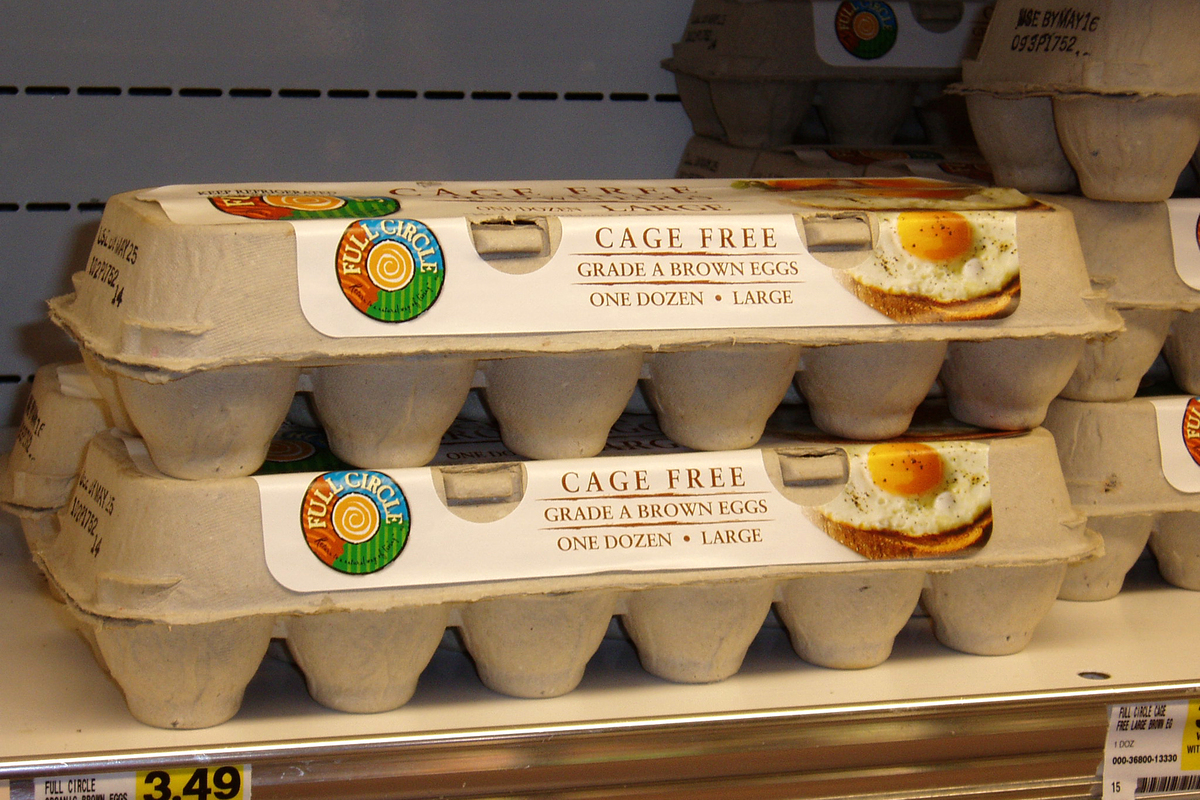 Cage-free eggs for sale in 2008 in Knoxville, Tenn.

But many animal welfare advocates believe these battery cage facilities are inhumane. "The birds never go outside, are unable to spread their wings, and are essentially immobilized for their entire lives," says Shapiro.

Ethics aside, this is by far the most common method of egg production. So unless a label tells you otherwise, you can assume this is what you're buying — even if it's labeled "Farm Fresh" or "All Natural."

What You Might Think It Means: Chickens happily wandering around a big red barn, pecking at corn kernels on a hay-covered floor — like the feeding farm I used to visit with my grandma.

What It Actually Means: Exactly what it sounds like: The hens don't live in cages. But they don't live in bucolic red barns, either. They usually live in aviaries: massive industrial barns that house thousands of birds. Each bird has, on average, 1 square foot of space.

Shapiro and other animal welfare advocates believe cage-free birds are better off than their caged counterparts. "They're not exactly living on Old McDonald's farm, but they're able to walk around, perch, lay their eggs in a nest and spread their wings — all important natural behaviors," he says.

But the science around the health of cage-free birds is less clear. Janice Swanson, an animal scientist at Michigan State University, has been leading a three-year study of egg production techniques.

She says cage-free birds have more feathers and stronger bones and exhibit more natural behaviors. But crowded aviaries also come with risks: reduced air quality, and twice the likelihood of dying. Over the course of their three-year study, less than 5 percent of birds in cages died, compared with more than 11 percent of cage-free birds. One of the most common causes of death was pecking by other chickens.

What You Might Think It Means: These birds were spared injections of nasty hormones that might cause them to sprout hair in unusual places and render them unhealthful for us to eat.

What It Actually Means: This term is rather misleading, because it's illegal to give hormones to poultry, and no large-scale farms in the U.S. do so. It's like putting a label on a cereal box that says, "No toxic waste."

What You Might Think It Means: These birds don't need antibiotics because they are healthy and clean.

What It Actually Means: Once again, this is a somewhat misleading term, because antibiotics are rarely used in the egg industry, says Shapiro. Chickens that are raised for their meat, on the other hand, do commonly get antibiotics to fend off disease and increase animal growth.

What You Might Think It Means: Hens playfully strolling and tumbling down green hills, home on the range.

What It Actually Means: Free-range means cage-free plus "access to the outdoors." But as Mark Kastel of the Cornucopia Institute notes, this "access" typically means a few small doors that lead to a screened-in porch with cement, dirt or a modicum of grass. And often, Kastel says, industrial fans that suck ammonia out of the building create "hurricane winds" through the small doorways, "and the birds don't really want to walk through that."

Kastel claims that the vast majority of free-range birds in commercial egg facilities never actually go outside. So in most cases, he says, free-range means the same thing as cage-free. Unlike in poultry production, there's no government oversight of the term "free range" when it comes to eggs, so companies can more or less interpret it as they see fit.

What You Might Think It Means: Chickens enjoying a salad bar of grass, herbs, Brussels sprouts and kale — you know, their natural diet.

What It Actually Means: This is perhaps the most confusing claim because chickens are not vegetarian. They're omnivores that, in the wild, get most of their protein from worms, grasshoppers and other insects. Hens that are fed a "vegetarian diet" are probably eating corn fortified with amino acids. 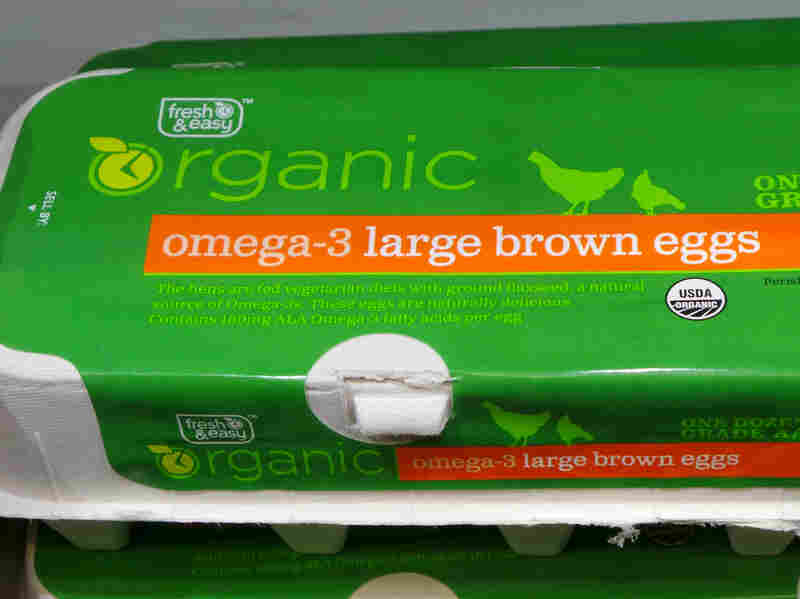 Eggs labeled as organic and omega-3 for sale under the Fresh & Easy store brand on Oct. 14. SITS Girls/Flickr hide caption 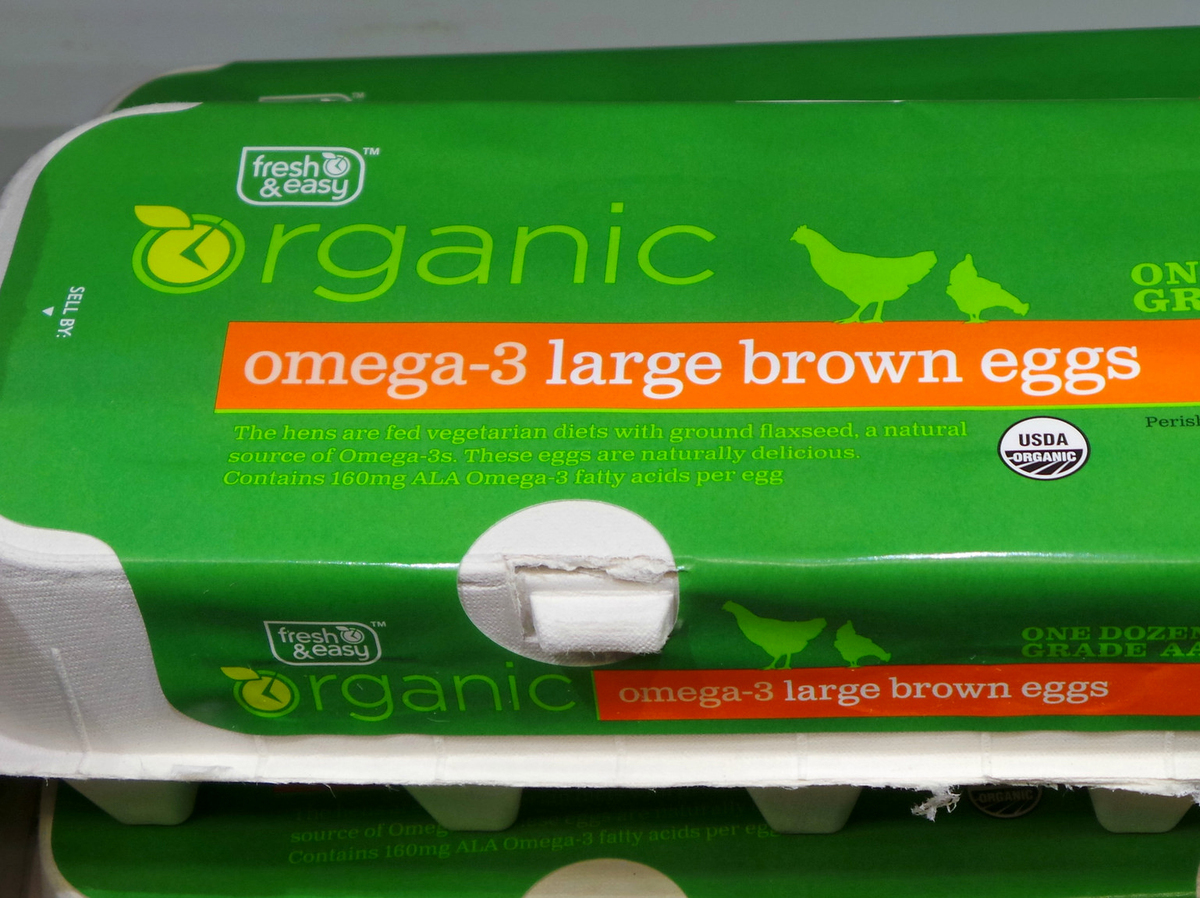 Eggs labeled as organic and omega-3 for sale under the Fresh & Easy store brand on Oct. 14.

What You Might Think It Means: The hens are fed a more healthful diet, which leads to eggs rich in omega-3 acids, which make me smarter.

What It Actually Means: The hens are probably given a bit of flaxseed mixed in with their corn feed, possibly leading to higher levels of omega-3s in their eggs.

What You Might Think It Means: Chickens with hemp bracelets and yoga pants change the sign on their coop from "Chicken Coop" to "Chicken Co-op," then begin composting.

What It Actually Means: "Organic" actually means something very specific, and egg producers who use it are subject to USDA regulation. Organic eggs must come from chickens that are free-range (cage-free plus access to the outdoors), fed organic feed (no synthetic pesticides) and receive no hormones or antibiotics.

But as was the case with "free-range" eggs, Kastel says "organic" eggs are usually coming from birds that live in crowded, industrial aviaries. His organization has created an egg scorecard that rates organic egg farms on a much wider variety of factors. 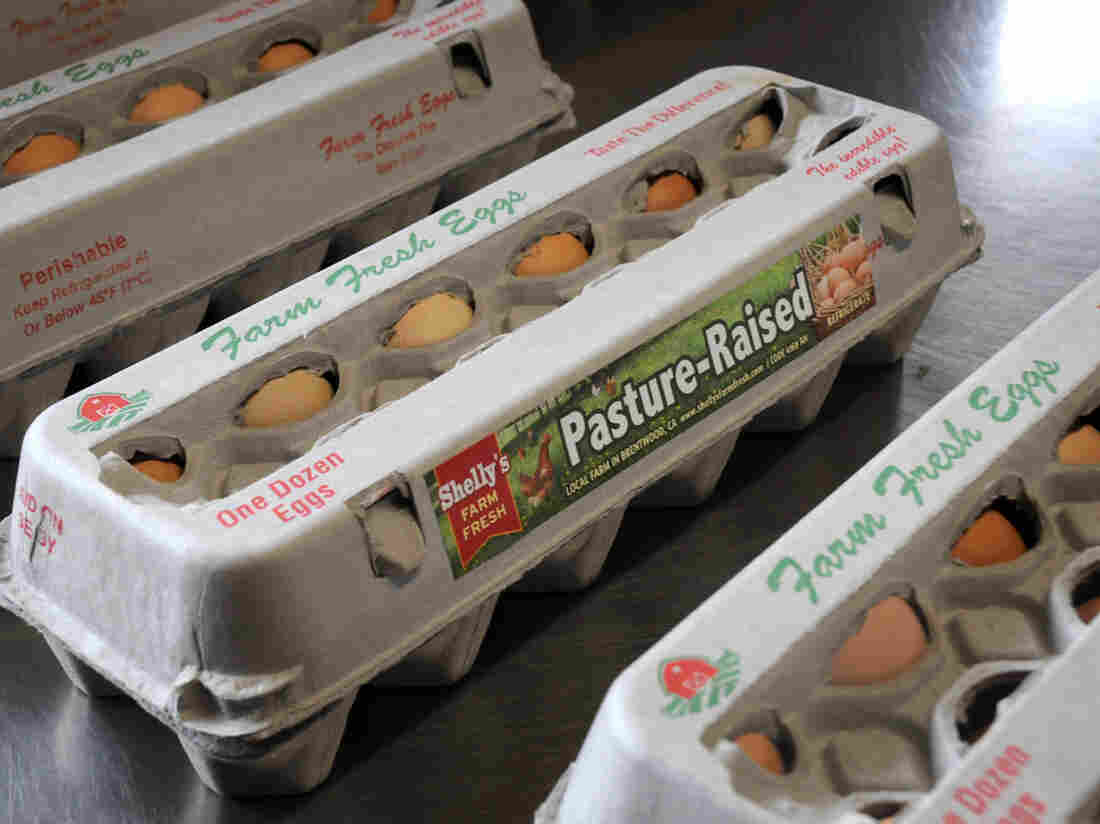 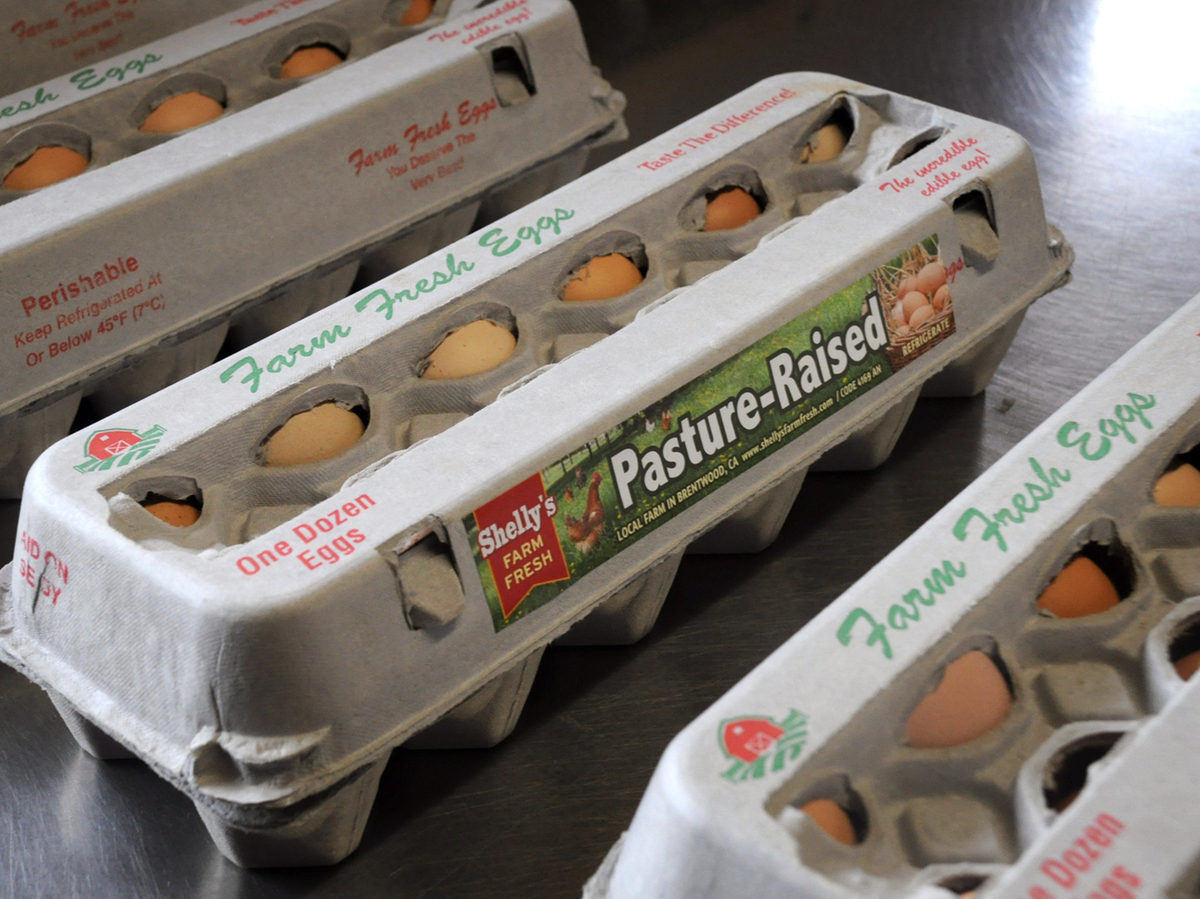 What You Might Think It Means: Chickens dashing between the legs of friendly cows and sheep on a sprawling pasture of peace and harmony.

What It Actually Means: In terms of replicating chickens' natural environment and way of life, pasture-raised is pretty much the gold standard. Pasture-raised birds spend most of their life outdoors, with a fair amount of space plus access to a barn. Many are able to eat a diet of worms, insects and grass, along with corn feed (which may or may not be organic).

That said, Kastel says there is a wide range of "pasture-raised" farms. Some have spacious fields; others are a bit crowded (some farms list the square footage per bird on their carton). Some farms rotate their birds through different pastures to ensure a rich, varied diet; others keep the birds on the same plot of land. Some have trees and bushes, which he says chickens prefer; others are flat, wide-open fields.

What You Might Think It Means: The animals on these farms are treated humanely.

What It Actually Means: What constitutes "humane" treatment is subjective — and a topic of much debate. But the third-party auditing organizations Certified Humane, Animal Welfare Approved and American Humane Certified assess egg farms according to a robust set of animal welfare guidelines.

So, where can I buy eggs with these labels?