Accessibility links
What Would Jesus Drink? A Class Exploring Ancient Wines Asks : The Salt The details of wine and winemaking practices in biblical times are debated among experts. But we do know that vino in Christ's day was very different from what we imbibe today. 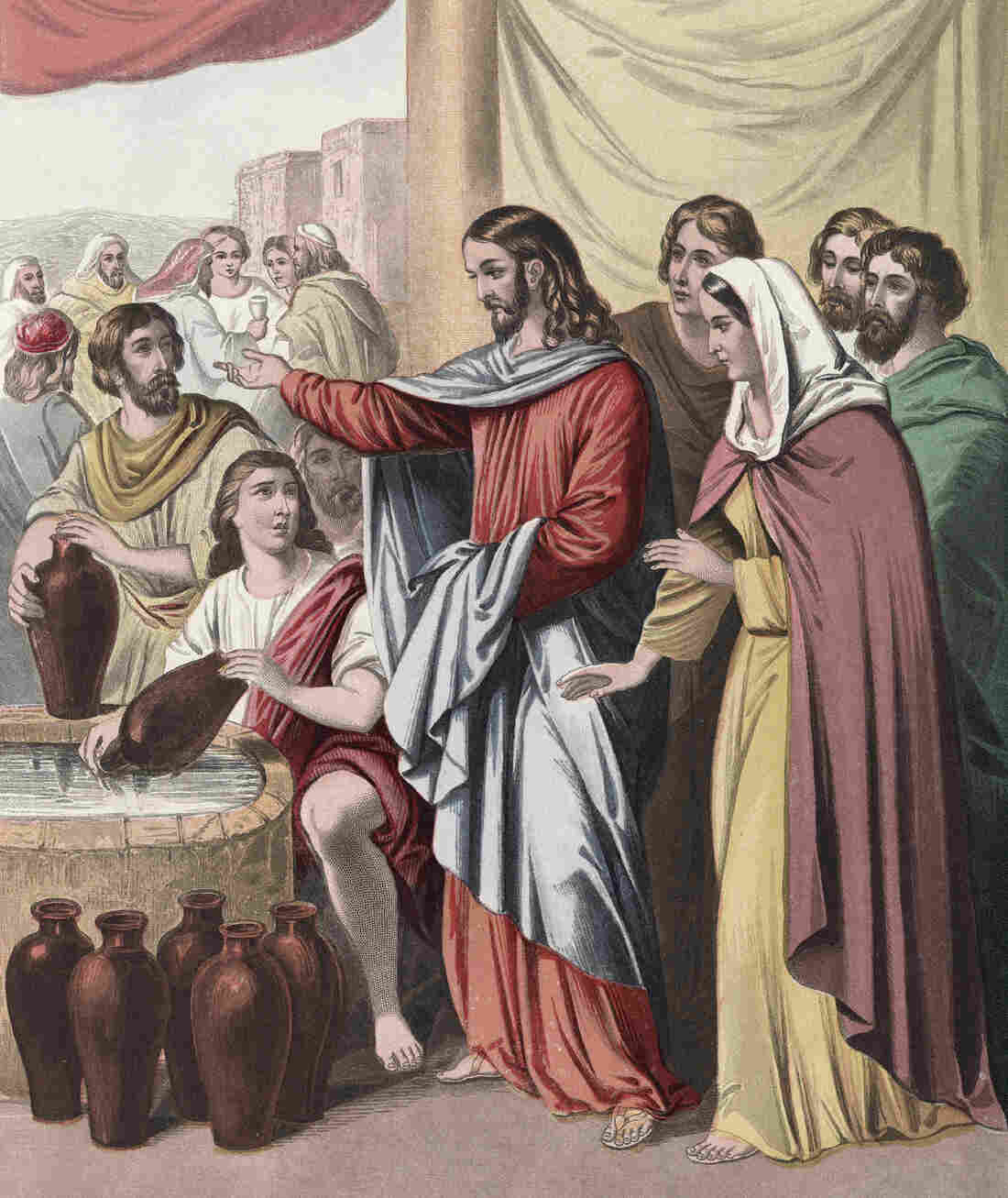 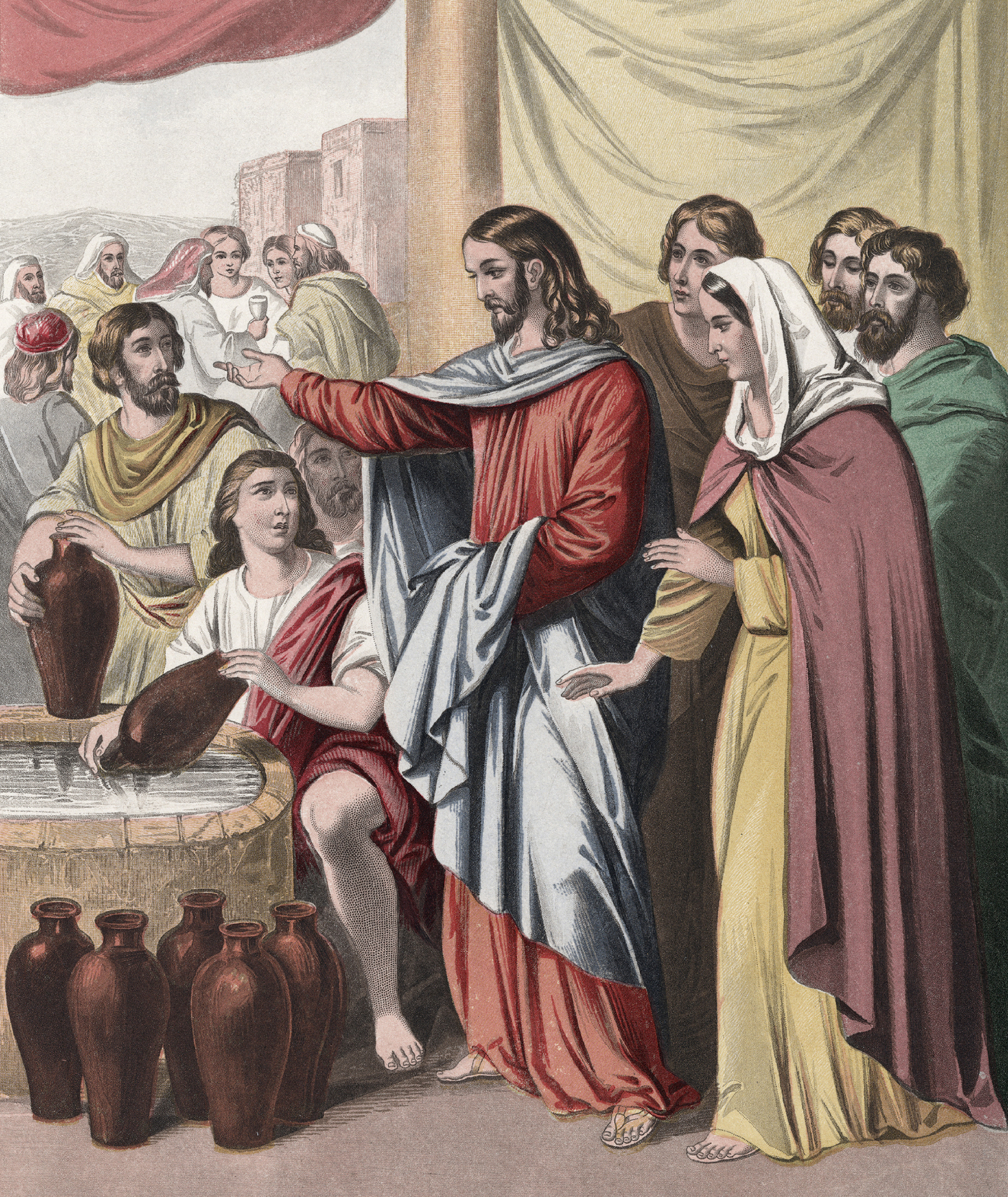 An illustration depicts Jesus Christ transforming water into wine during the wedding at Cana (John 2:7).

Inside the Boston Wine School, Jonathon Alsop places empty glasses and plates of figs and cheese before a small group of students. Alsop, who founded the school in 2000, is doing a test run of a new class that poses the question: What would Jesus drink?

"This is ... a cheese that Jesus might have eaten," he tells students. "It's called Egyptian Roumy — it was a cheese that was introduced to the Egyptians by the Romans. It's a sheep's milk cheese."

He opens a red blend from Lebanon. "This is something that citizens in biblical times would not have been acquainted with — the screw cap," he jokes.

Alsop founded the school 14 years ago and has taught food and wine classes on everything from pairing wine with meat to tasting the wines of Tuscany. Alsop came up with this latest idea after reading the Gospels.

"This picture of Jesus as a foodie and a wine lover, slowly but surely, starts to emerge. I mean, his first miracle was turning water into wine," he says.

As Alsop opens a bottle of Italian wine, he explains to his students that the wine they are sampling bears little, if any, resemblance to wine during Christ's time.

"It's clean. It's clear. It's in a bottle," says Alsop, holding up the wine glass and examining it. "These wines were shipped around the Mediterranean in ceramic or wood casks; they would have taken on that flavor. This is almost certainly different."

The details of wine and winemaking practices from the Holy Land are debated among experts. There isn't much archaeological evidence or written record.

But we do know that in Jesus' day, wine was being produced in Galilee and modern-day Jordan, says archaeologist Patrick McGovern of the University of Pennsylvania Museum. And vino of that era came laced with additives like tree resins, peppers and capers, says McGovern, who is known as the "Indiana Jones" of ancient fermented beverages for his scholarship on the topic.

"The idea was not just to cover up the signs of a deteriorating wine, although that was an added incentive, but to keep the wines for a longer time and produce new, exciting tastes for jaded palates," says McGovern.

Students in Alsop's class inquire about taste and texture, but they also raise two frequently debated questions surrounding ancient wine: Was it safer to drink than water, and was it alcoholic?

We asked McGovern, who is not involved in Alsop's class. McGovern says the antioxidants found in the additives and alcohol killed harmful microorganisms, so wine was much safer than raw, unfiltered water. And it certainly had a boozy kick: Fermentation is a process that occurs naturally when yeasts residing on the skin of the grapes consume the sugar in the fruit and create alcohol.

Erica Frye came to the class from nearby Wayland, Mass. She was raised in a family of Methodist ministers that abstained from alcohol, but she was curious about biblical wine in a historical context.

"If you really dig down into history, and into the history of wine, it's coming from those areas of the world," she notes.

Jenna Nejame attended Catholic catechism classes as a kid, but references to wine were typically avoided. "They don't really dwell on ... the drinking alcohol part," she says with a laugh.

Alsop stresses that his interpretation is subjective. As an example, he cites Christ's offering of bread and wine as his body and blood during the Last Supper.

"He's saying, spiritually, take me inside you and let my spirit suffuse your spirit, but naturally he does that through these wine and food metaphors," Alsop says.

When asked if he thinks Jesus would have preferred red or white wine, Alsop doesn't hesitate.

"I'd like to think that Jesus was a red guy," Alsop says. "I don't know why. I guess it's just my own personal desire to see it that way."

We'll never know, of course. McGovern says the Romans preferred white wine, but according to inscriptions found on ancient bottles and casks, most wine from the Holy Land was, indeed, red.