Accessibility links
Beyond Free Lunch: Schools Open Food Pantries For Hungry Families : The Salt More than 8 million U.S. children don't get enough to eat. In Sacramento, Calif., one school is helping families cope by sending students home for the weekend with backpacks full of groceries. 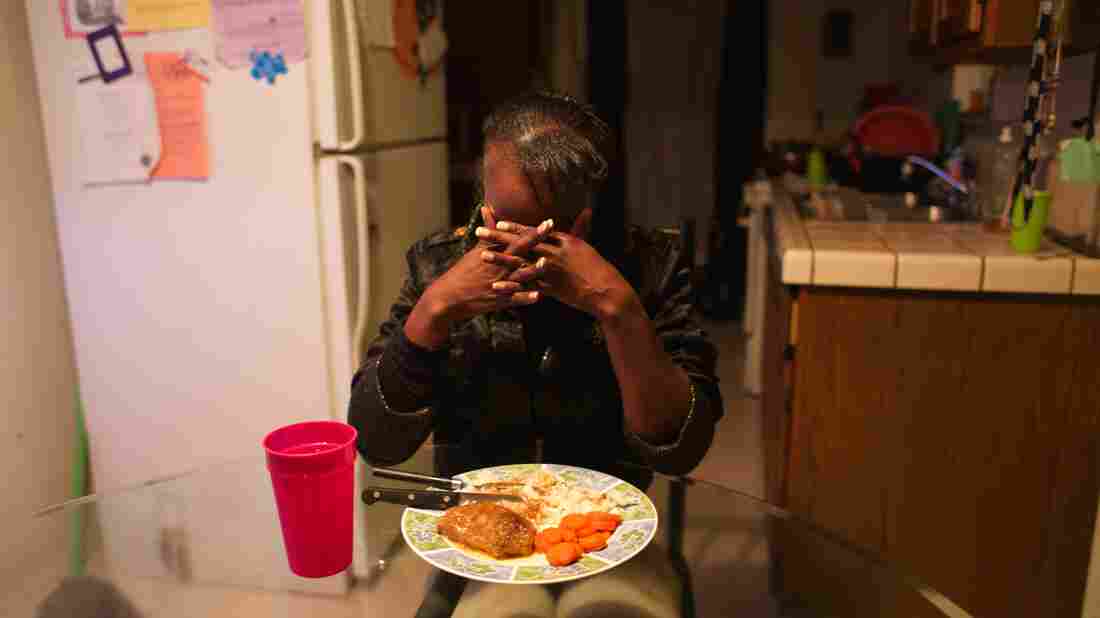 Erica Johnson prays before her meal. She volunteers at the food pantry at John Still school where three of her four children are students. She eats alone after she feeds her kids. Andrew Nixon/Capital Public Radio hide caption 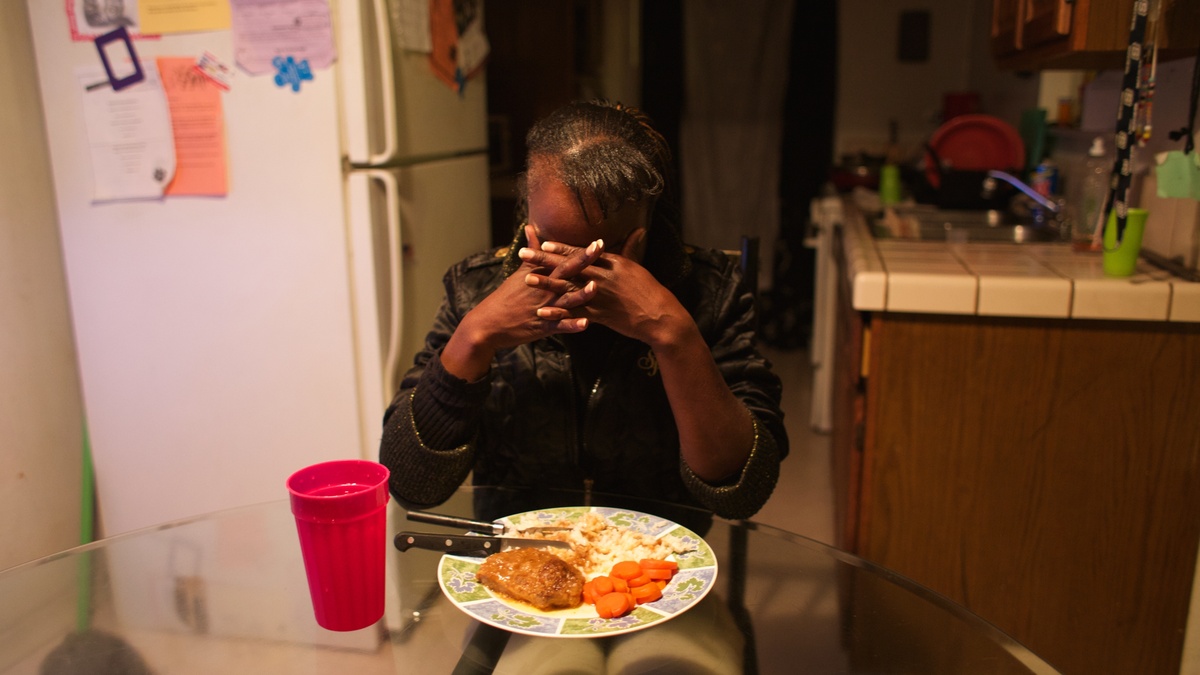 Erica Johnson prays before her meal. She volunteers at the food pantry at John Still school where three of her four children are students. She eats alone after she feeds her kids.

John Still K-8 School, home of the Tigers, serves Meadowview, a picturesque name for a Sacramento, Calif., neighborhood blanketed in concrete and bare of trees.

There are 970 students on John Still's campus, and every one of them qualifies for the free and reduced meal program, which provides breakfast, lunch and a supper snack.

According to the U.S. Department of Agriculture, 8.6 million children experienced food insecurity in 2013. When food gaps become chronic in these households, poor nutrition and stress can turn into long-term health consequences for adults and children.

More schools are stepping up to help these families. Feeding America, a network of U.S. food banks, says its School Pantry Program served more than 21 million meals to nearly 110,000 children nationwide in 2013 through a variety of models — including boxed meals, and sites where families choose items for their meals.

Amaya Weiss, the learning support specialist at John Still, runs the Youth and Family Resource Center, which houses a food pantry for students and their families. 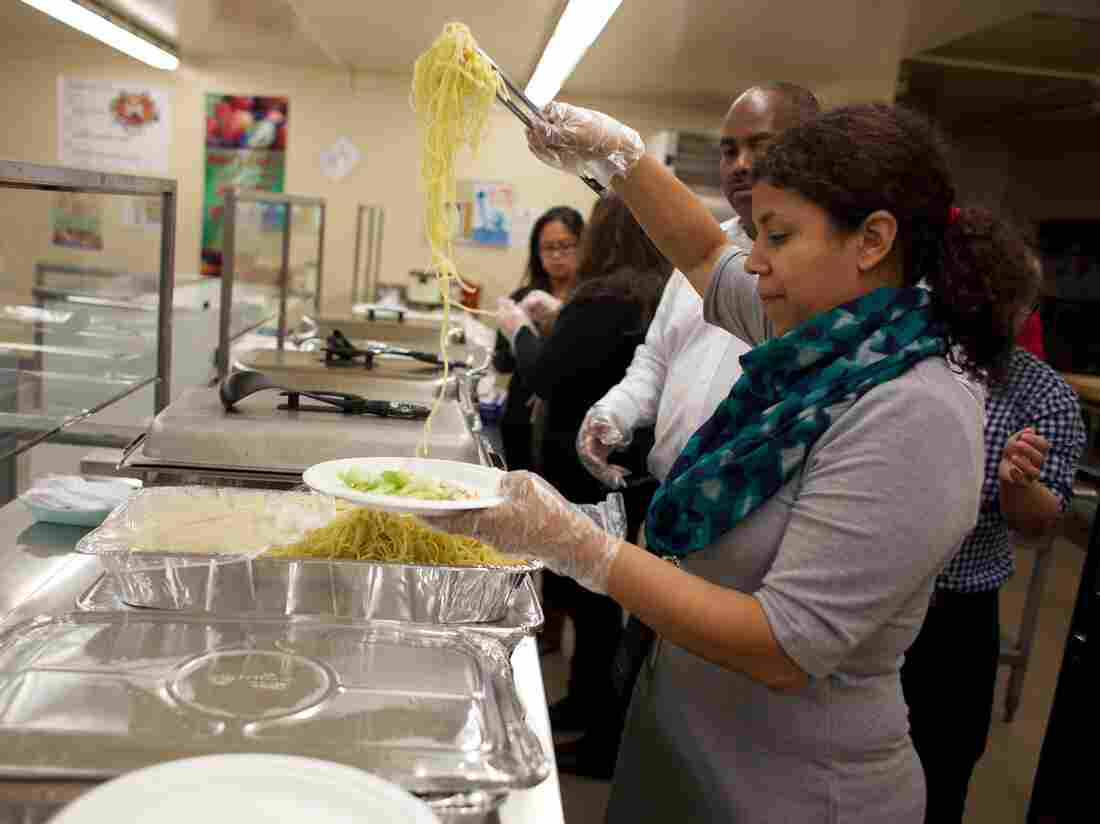 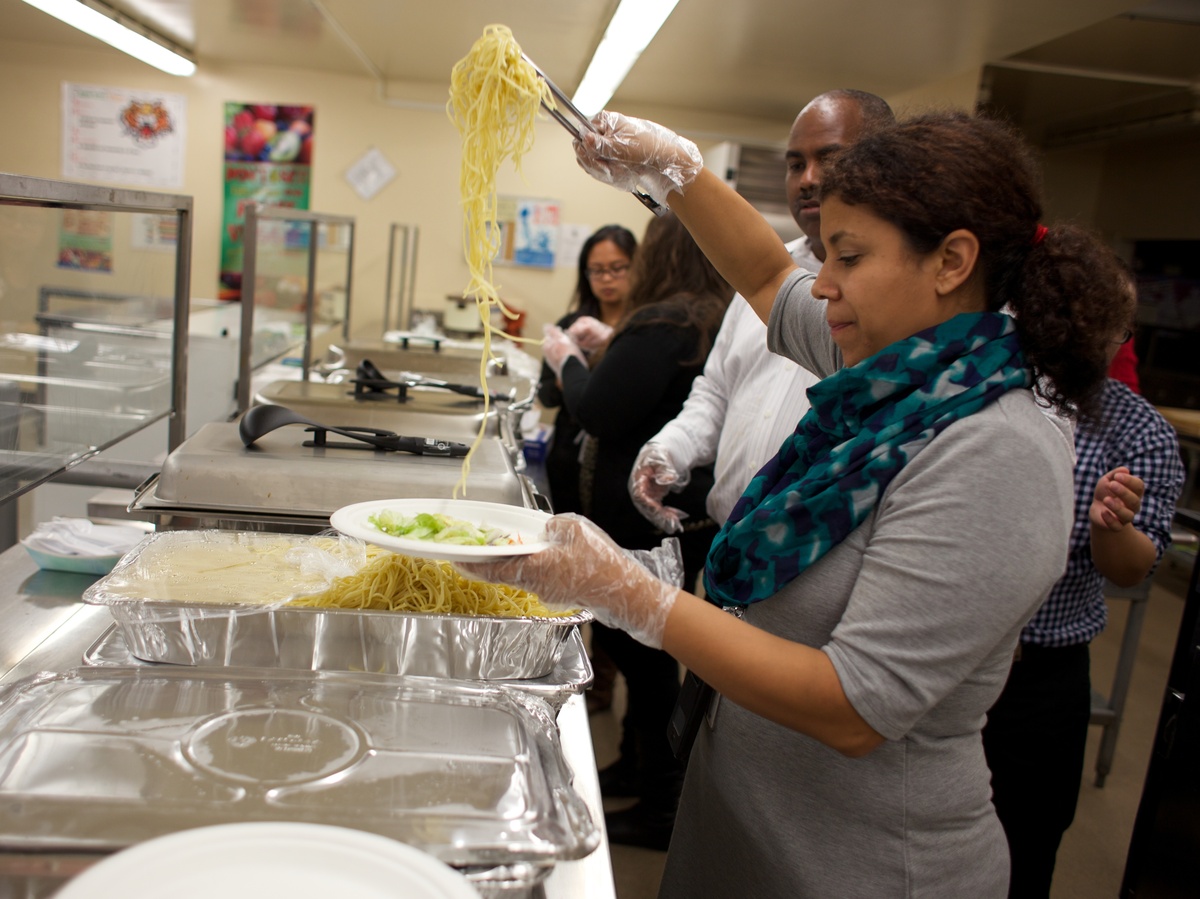 Amaya Weiss, who runs the food pantry at the John Still K-8 School in Sacramento, serves up a spaghetti dinner at the school's monthly family night.

The food pantry has "lots of Top Ramen, lots of soups, tomatoes," Weiss says. "My families love pasta, because it's easy to make. And sometimes the kids just come in here and say, 'I'm still hungry, can I have something to eat?' And then we give them that, too."

Weiss started seeking food donations from Sacramento churches a year ago after realizing many students couldn't count on weeknight dinners or weekend meals at home. (Her school does not receive support from Feeding America or any other national organizations.)

The food pantry also gives Weiss a chance to connect with parents like Erica Johnson, a single mother of four. Johnson volunteers at the food pantry, and also relies on it. She says her food stamps run out by the 20th of each month.

That uncertainty would be hard for any parent to bear.

"So if we're like running real low on food, I'm like, 'Okay guys, here's the thing: We're almost out of food, so mom has to compromise,' " Johnson says. Without enough in the cupboards for a real meal, the family eats whatever is left.

Many families reach these shortages from time to time, says Barbara Laraia, associate professor at the University of California Berkeley's School of Public Health. But for many parents whose kids attend John Still, the problem is chronic, with rent and bills draining funds until families are grasping at straws at the end of every month.

A Glimmer Of Hope In The Fight Against Hunger In America

"The fixed expenses are the ones that get prioritized, and the food budget is more elastic," she says. "So families are forced to compromise on their food budget."

With rising income inequality, Laraia says the problem is not going away. She encourages policymakers to take note of what's working within community-based strategies, but also says that public schools like John Still shouldn't be left with the burden of poverty reduction.

"If a school is needing to address food insecurity above and beyond the school lunch and school breakfast program, that means that that school — and that community — is in crisis," Laraia says.

Hunger points to a host of socioeconomic woes, and Weiss says she is aiming to draw high-risk families out of the woodwork.

But sending a student home with a backpack of groceries for the weekend is not meant as a quick-fix for poverty. Weiss says she pictures that food as a bridge.

"It's meant to give you a piece of trust — a piece of what we can offer," she says. "So I just want that bag to be kind of the beginning of a conversation of where we can go together, and how we can get you linked to better resources."

And when Weiss tells kids, "hey, just because you're growing up hungry in Meadowview, doesn't mean you'll always be hungry," she wants that to be true.

This story came to us from Capital Public Radio's documentary series, The View From Here, and its Hidden Hunger project.