Accessibility links
If You're Toasting To Health, Reach For Beer, Not (Sparkling) Wine : The Salt Though beer has been blamed for many a paunch, researchers say it's more nutritious than most other alcoholic drinks. Moderate consumption may also reduce the risk of heart disease.

If You're Toasting To Health, Reach For Beer, Not (Sparkling) Wine

If You're Toasting To Health, Reach For Beer, Not (Sparkling) Wine 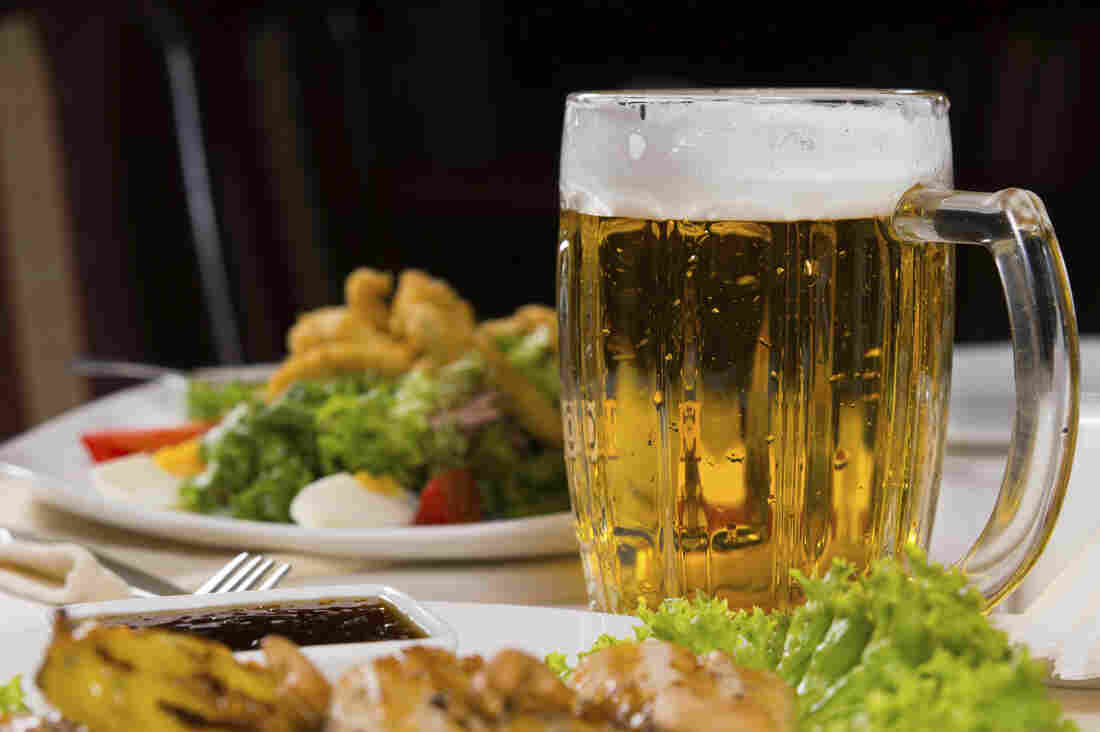 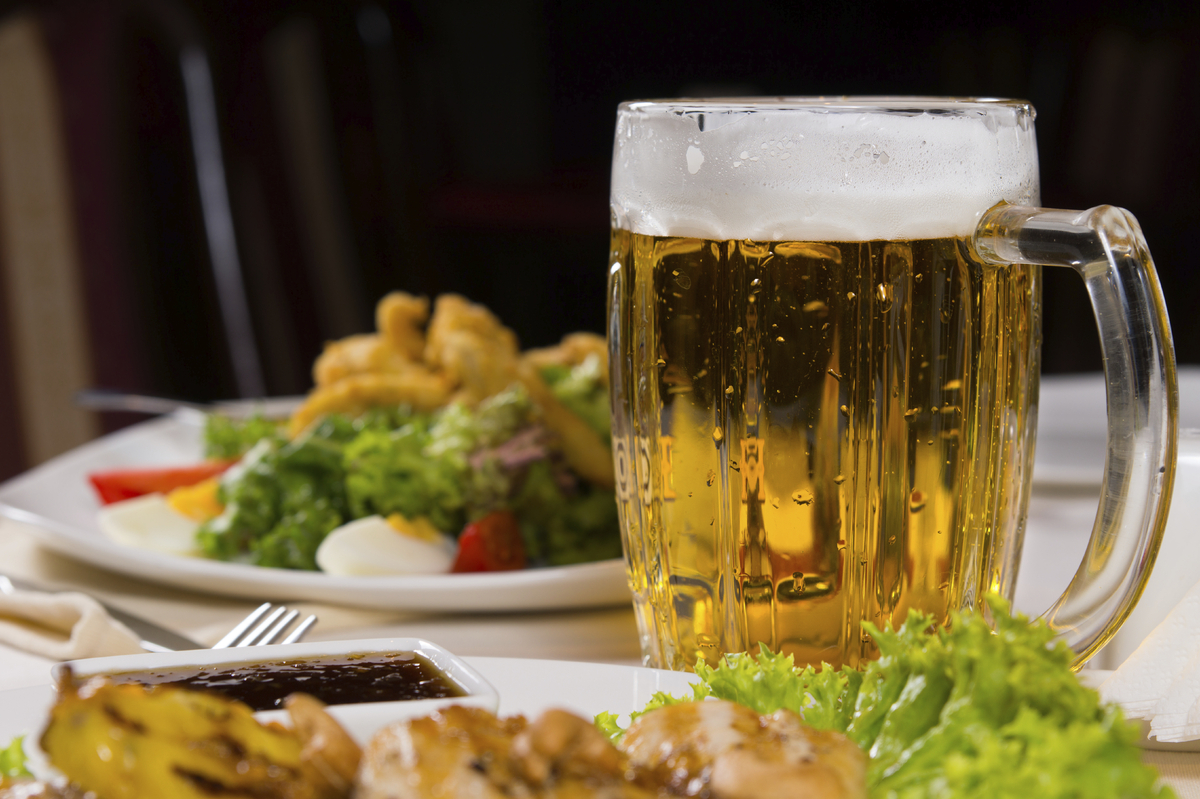 What's the healthiest libation for ringing in the New Year?

Beer, says Charlie Bamforth, a professor of brewing sciences at the University of California, Davis. Though it's been blamed for many a paunch, it's more nutritious than most other alcoholic drinks, Bamforth says.

"There's a reason people call it liquid bread," he says.

Beer, he says, has more selenium, B vitamins, phosphorus, folate and niacin than wine. Beer also has significant protein and some fiber. And it is one of a few significant dietary sources of silicon, which research has shown can help thwart the effects of osteoporosis.

Preliminary research by Bamforth has also suggested that beer may have prebiotics — nourishment for the good bacteria in our gut. As for antioxidants, he says both beer and wine contain them.

But, as we've reported, resveratrol, the molecule in red wine and chocolate once celebrated as a nutritional key to longevity, may not offer much of a benefit — if consumed in the small quantities we typically get from food and drink.

He adds that the antioxidants in wine may also not be as readily absorbed as the ones in beer — compounds like ferulic acid.

"With beer, more of [the antioxidants] actually get into the body," he says, though beers can have varying levels of them.

And despite a common misconception, color has little or no bearing on a beer's nutritional content, Bamforth says. That is, a pint of Guinness is roughly equivalent to a Budweiser lager. What's more, Bamforth notes, craft beer should not be perceived as healthier than mass-produced lagers, which he says also tend to be made with natural, grain-based sugars and few, if any, synthetic additives.

So what about the dreaded beer belly? After all, alcohol contains about 7 calories per gram (almost as much as fat, which contains 9 calories per gram). Those calories can add up after a few bottles, with about 150 calories in your typical, 12-ounce serving of 5 percent-alcohol beer.

Bamforth argues that we shouldn't blame big bellies on beer. Beer drinkers who are overweight or obese are probably eating too much greasy pub grub and spending too many hours on the bar stool, he notes.

"But the brewers shot themselves in the foot when they came out with 'low-carb' beer, implying that everything else they made was 'high-carb,' " Bamforth says.

Calorie-counting, though, gets a lot trickier in the world of craft beers. Many imperial stouts, barley wines, IPAs, Belgian styles and bocks measure 8 or 9 percent alcohol by volume — or even much more. In addition, many of these beers — especially highly hopped, bitter beers — tend to be sweeter, with extra calories from carbs (which add another 4 calories per gram).

While Bamforth is correct that beer is lower in carbs compared with, say, bread, it has lots more carbs than wine. A standard 5-ounce glass of wine contains just 1 or 2 grams of carbohydrates. A 12-ounce serving of a 5 percent-alcohol beer has between 10 and 20 grams of carbs — or 40 to 80 extra calories.

Up the ABV, and your calories start to balloon. A 12-ounce bottle of 9.6 percent ABV Sierra Nevada Bigfoot Barleywine will contain roughly 300 calories, 200 of which come from the alcohol. Right up there among the most calorie-packed beers is Dogfish Head's 120-Minute IPA, which contains 20 percent alcohol — twice that of Bigfoot. One bottle may contain more than 500 calories. That's about the same energy as you'd get from a cup of granola — or four glasses of wine.

Sam Calagione, founder of Dogfish Head Brewery, tells The Salt that his philosophy on drinking such hefty beers is that the higher alcohol content boosts flavor — which makes the extra calories worth it. He adds that Dogfish Head, like many craft breweries, also makes lower-alcohol beers with about the same calorie counts as mainstream lagers.

Arthur Klatsky, a retired Kaiser Permanente doctor and a researcher of the health effects of alcohol consumption, doesn't favor any particular alcoholic beverage. Yet he agrees that "beer has more nutrients, often more calories, B vitamins. It's more like a food [than wine or spirits]."

He says that if you want to reap the heart-health benefits of drinking, consistency is key: two or three drinks per day for an average man, and one or two for a woman. A drink, he notes, is a 5-ounce serving of wine, or a 12-ounce serving of 5 percent-alcohol beer.

But Klatsky is just as quick to warn against overdoing it, which can damage the liver and, in some cases, cause fatal alcohol poisoning.