Accessibility links
Luck Be A Lentil Tonight! What The World Eats To Welcome The New Year : The Salt From Italy to Japan to the Philippines, people will hope for happiness, health and wealth as they sit down to a New Year's meal. Sometimes that last wish is expressed as actual money in the food.

Luck Be A Lentil Tonight! What The World Eats To Welcome The New Year

Luck Be A Lentil Tonight! What The World Eats To Welcome The New Year

Many cultures greet the new year with a feast that symbolically sets the table for the year ahead. As they sit down to traditional dishes, people often try to metaphorically eat their hopes and goals for the coming year.

We here at The Salt did a quick survey of New Year's food traditions around the world (back in 2011) and couldn't help but notice a few common themes. The ingredients in these dishes might reflect cultural variety, but the sentiments behind them are pretty universal. What most people hope for as they sit down for a New Year's meal, it seems, is happiness, health and wealth. Sometimes that latter wish is expressed quite concretely — in the form of actual money in the food. 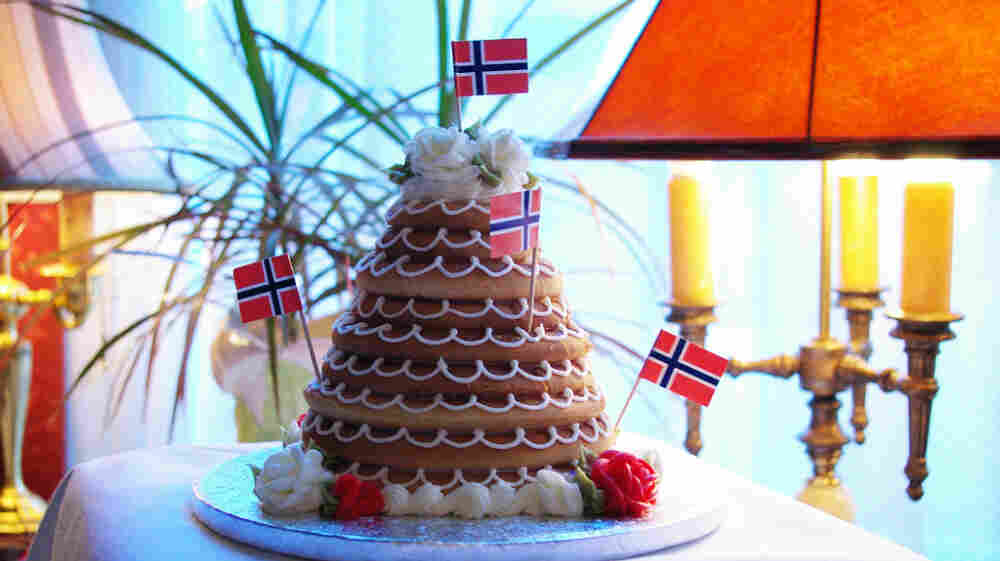 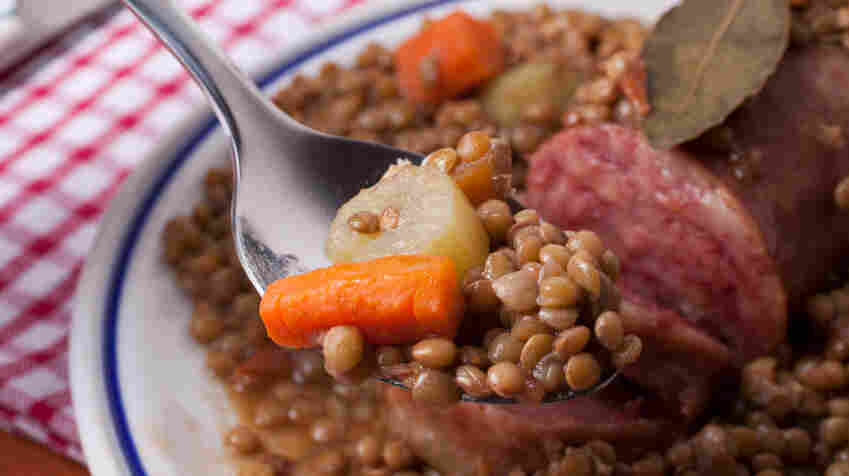 Lentils are served on New Year's Eve after midnight. The lentils, with their coinlike shape, represent luck and prosperity. The dish is often served with cotechino, a spicy pork sausage, and zampone, a deboned pig trotter stuffed with sausage meat. Pork signifies the fat or bounty of the land. And Italians, among others, eat this "other white meat" to evoke the future because pigs root forward, whereas other animals, such as chickens or cows, move backward or stand still.

But whichever way you move into the new year in Italy — forward, backward, sideways, stumbling home drunk — make sure you keep your eyes up. Italians throw old possessions out the window after midnight as an out-with-the-old, make-room-for-the-new gesture. 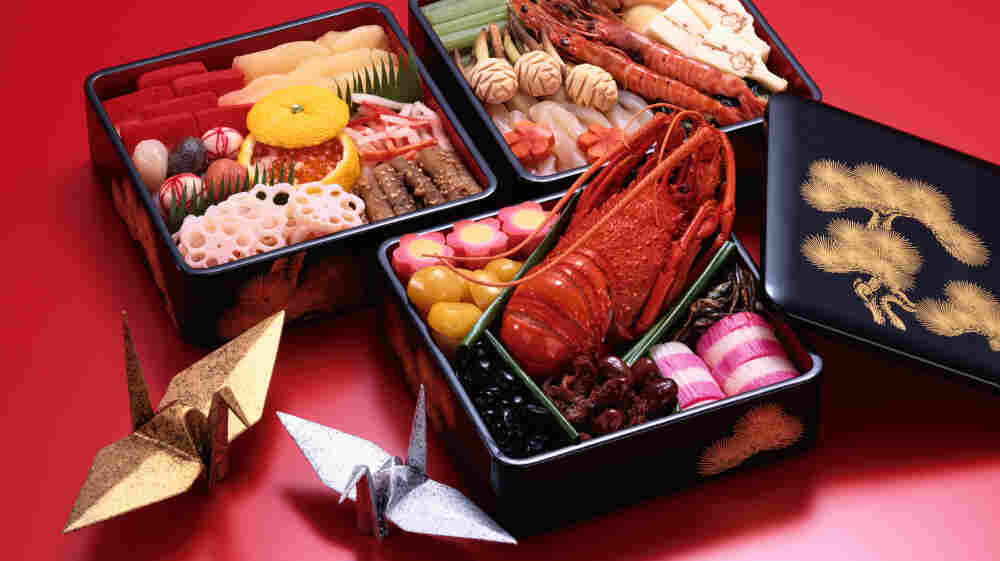 Osechi ryori, or New Year's cuisine, also includes foods symbolic of good harvest, good health, happiness, prosperity and so on. Lucky colors, including red, white and yellow, dominate the meal's color scheme: slices of red and white fish paste, pink prawns, cucumber, salmon roe and mandarin oranges. The meal is traditionally packed in special, lacquered boxes decorated with an indication of the upcoming season: pine needles, plum blossoms, bamboo leaves. Arranging the food in the boxes is quite time-consuming, so many households keep their traditional boxes as a display only and order their food from a store or restaurant. One box of osechi can cost as little as $100; a whole set has fetched as much as $229,000 — of course, that one was packaged in a box made of 3.3 kilograms of gold. 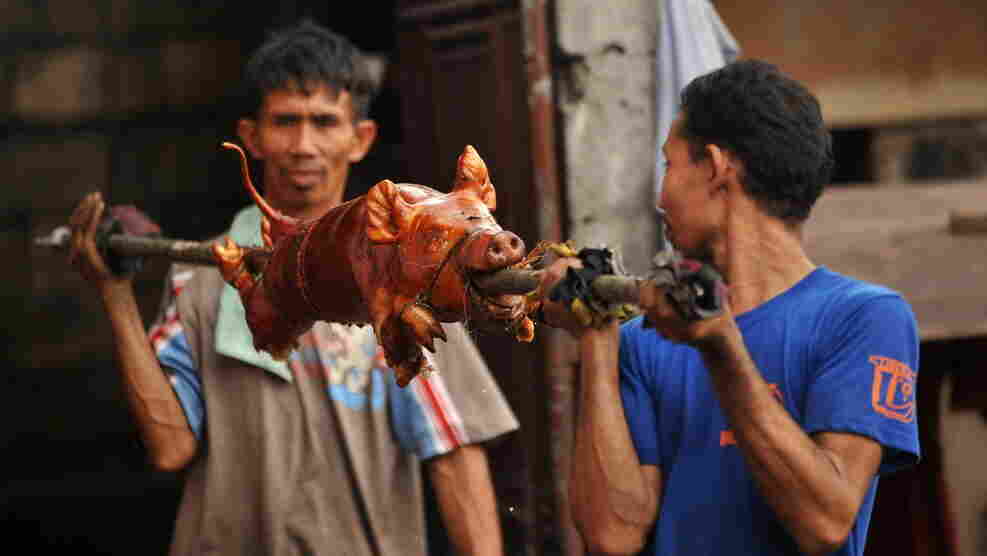 Filipino families hold a traditional dinner party called Media Noche. Circles are the theme as people show up dressed to the nines in polka dots. The shape signifies prosperity — think coins again. Circular-shaped foods dominate the table with a special focus on fruit, such as grapes, oranges and melons, for good luck. Filipinos actually try to choose 12 different kinds of fruit to put on the table — one for each month in the new year — but will resort to apples or mangoes, if need be.

Other typical dishes include noodles, roasted pig and caramel-topped rice cake. Just make sure you leave some food on the table at midnight; it's a bad omen in the Philippines to start the new year off as a glutton. 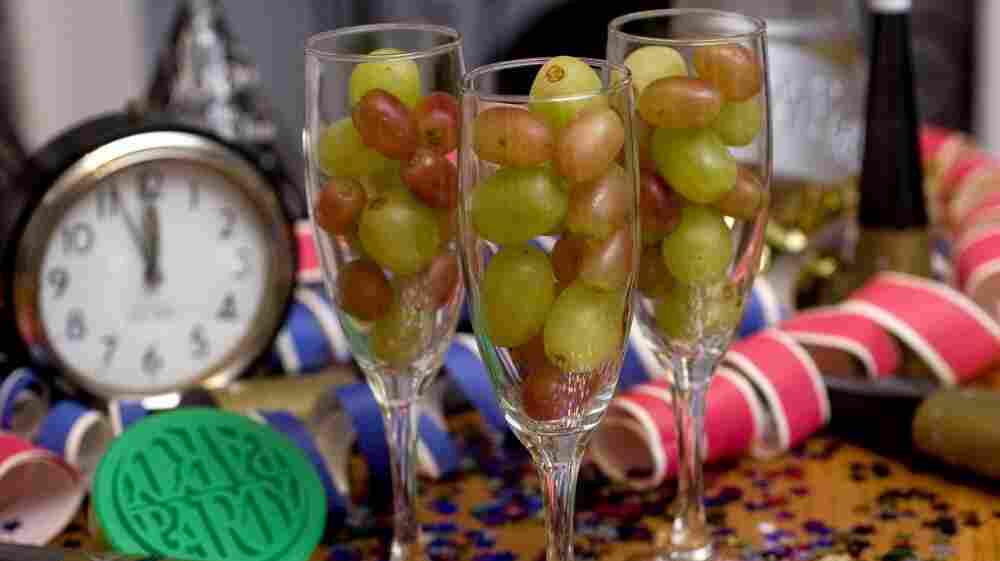 Many Spaniards will pop 12 grapes into their mouths at midnight — one with each chime of the clock. Each grape represents a wish for happiness and luck for every month in the coming year. Legend has it that this "12 grapes in 12 seconds" custom stems from grape suppliers in the Alicante region who were bothered by a surplus of crop more than a century ago. The tradition has trickled into other Latin cultures too, with a few modifications. In Portugal, they eat 12 raisins; in Peru they eat a 13th grape for good measure. 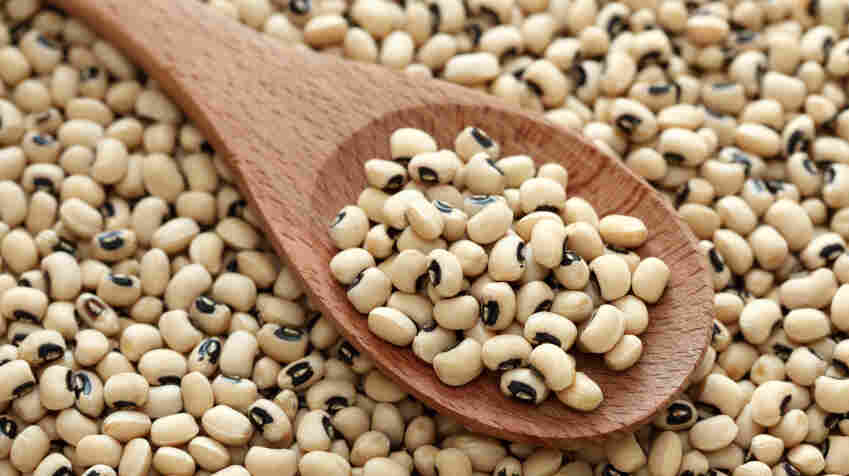 "Hoppin' John" – a dish of black-eyed peas, rice, pork and a handful of vegetables and spices — is served in the Southern U.S. on New Year's Day. Hoppin' John usually comes with cornbread and some form of greens: collard greens, mustard greens, turnip greens, chard, kale or cabbage. The greens here represent, well, green — as in money. The meal, derived from slaves in Carolina, is thought to bring a year full of good fortune. And sometimes the meal is cooked with a coin. Whoever ends up with the coin in his dish wins extra luck — and perhaps a trip to the dentist.