Accessibility links
: The Salt The roscón is a ring-shaped, citrus-infused brioche ubiquitous on Spanish tables on Three Kings Day, Jan. 6. It comes with an ancient pedigree and a trinket inside that will bring luck to the finder. 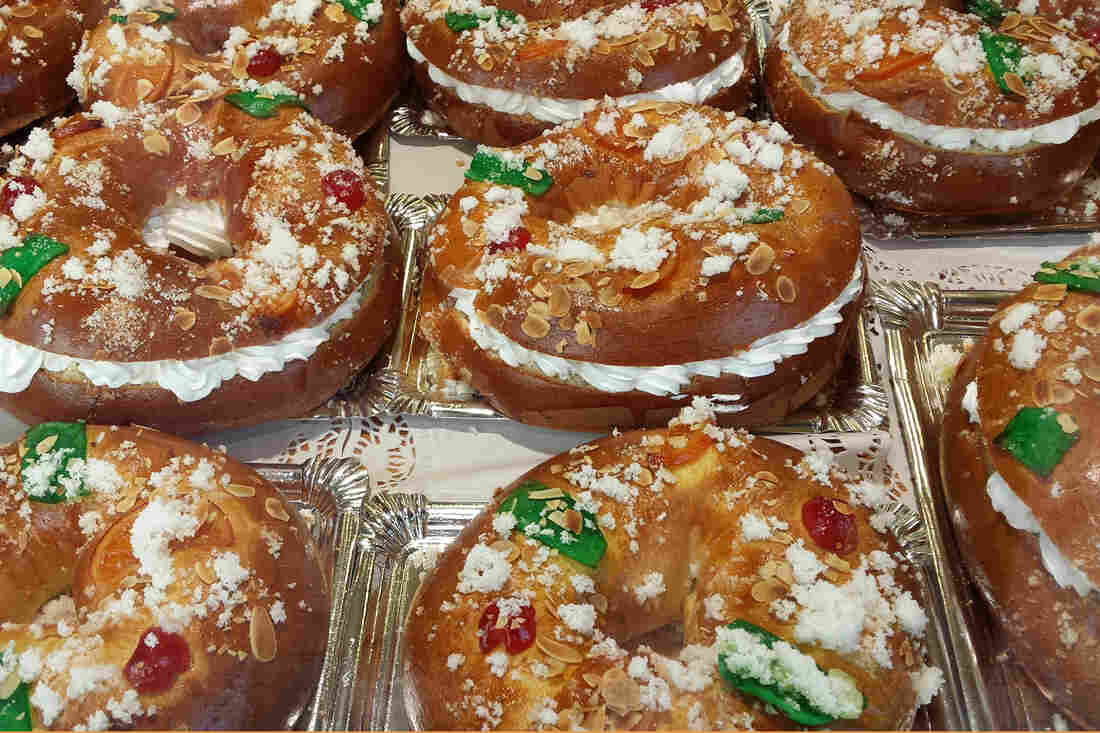 The classic Spanish roscón is an aromatic, citrus-infused brioche topped by sugar, flaked almonds and candied fruits – arranged like the jewels on a king's crown. It's ubiquitous on Spanish tables on Three Kings Day, Jan. 6. James Badcock for NPR hide caption 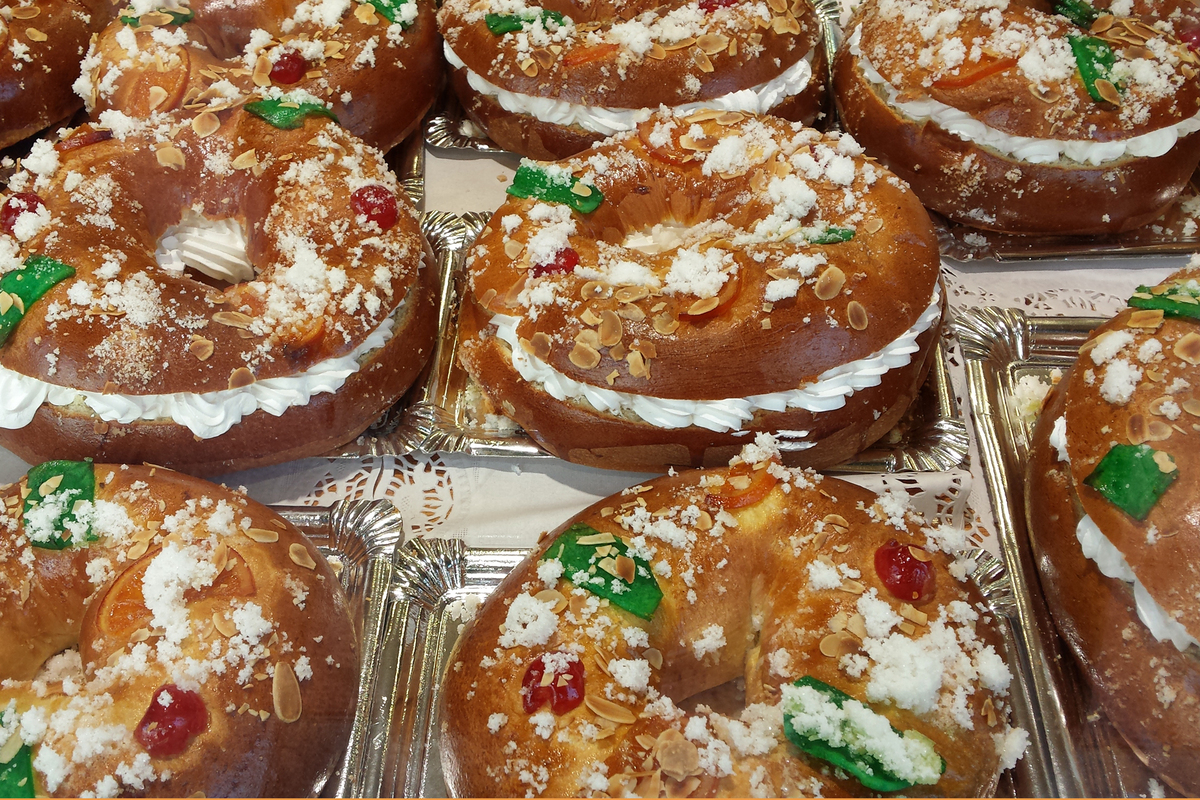 The classic Spanish roscón is an aromatic, citrus-infused brioche topped by sugar, flaked almonds and candied fruits – arranged like the jewels on a king's crown. It's ubiquitous on Spanish tables on Three Kings Day, Jan. 6.

The first time I visited my in-laws in Spain, they fed me a sweet, doughy treat that, for a brief moment, made me wonder whether they were trying to kill me.

You see, it was Jan. 6, el Dia de Reyes – or Three Kings Day — which commemorates the visit of the magi to the baby Jesus. My hospitable in-laws had laid out a delicious roscón, a ring-shaped cake delicately flavored with orange blossom water. But as I tucked into this scrumptious offering, my teeth struck something very, very hard.

That something was a small porcelain elephant, which I kept as a treasure for some years. And while some might consider it a choking hazard, in Spain, finding the figurine in my food was a sign of good luck. Such was my introduction to the magic and mystery of the roscón de Reyes.

Reyes is the culmination of Spain's lengthy holiday period, which is dotted with a series of lavish, celebratory meals. The feasting begins with dinner on Christmas Eve and reaches all the way through to lunch on Jan. 6. That's the day when children awake to find presents brought by the Three Kings (Los Reyes Magos).

Once upon a time, these gifts of the magi were quaintly deposited in the little one's shoes. These days, the footwear tends to be completely engulfed by bulky gifts from the East (although that's likelier to be China than Persia). For the wicked child, however, there is merely a lump of coal – often cheekily included anyhow now that modern confectioneries have come up with very authentic-looking candy coal.

This is a sweet day, and the roscón is as universal a culinary component of a family feast as you will find in Spain. The roscón is nigh-on ubiquitous across Spain during el Dia de los Reyes, but my sample of Spanish families turned up differences as to when, exactly, the roscón makes its appearance: "We always have it for breakfast after opening our presents." "With lunch on the 6th." "In my house, we had roscón in the afternoon with hot chocolate."

The figurine inside — sometimes religious in nature, such as an angel, sometimes as random as my elephant — is meant to signal fortune in the year to come.

But there is another surprise: The person who finds the haba (dried fava bean) must pay for next year's cake. And boy, do Spaniards buy roscones. This year, according to the Asemac baking industry association, some 26 million rings of reyes dough will be flying off the shelves – meaning slightly more than 1 roscón for every 2 people.

The bean tradition hints at the roscón's pagan origins, supposedly as a cake decorated with figs and dates and made for the Roman feast of Saturnalia. The finder of the bean was "king for a day," even if he was a lowly toiler or even a slave. Transmuted into a Christian tradition and with varying ingredients, the kingly ring is now served in parts of France, Spain, Portugal, across Latin America and in French-influenced North America, notably Quebec and Louisiana.

The classic Spanish roscón is an aromatic, citrus-infused brioche topped by sugar, flaked almonds and candied fruits – arranged like the jewels on a king's crown. But the display cases in Spanish bakeries often contain more luxurious versions: sumptuous coils of marzipan-laden dough, which are sometimes styled to look like a snake through strategic placement of toppings and ornamentation.

This being Spain, there are regional versions, proudly billed as Galician or Catalan, but as far as I can see, they are all variations on a theme. Fillings are optional: Whipped cream is the most widely available, but chocolate mousse can be a good option for those children, big or small, with a seriously sweet tooth.

Just take care of that tooth when you sink through the crust and into the bready goodness. Something hard may lurk within.

James Badcock is a freelance journalist based in Madrid.