Accessibility links
How Anglers Are Learning To Save Fish That Get 'The Bends' : The Salt Millions of deep-water fish die every year because of barotrauma, a condition divers know as "the bends." But scientists say descending devices can help fish survive a trip to the surface. 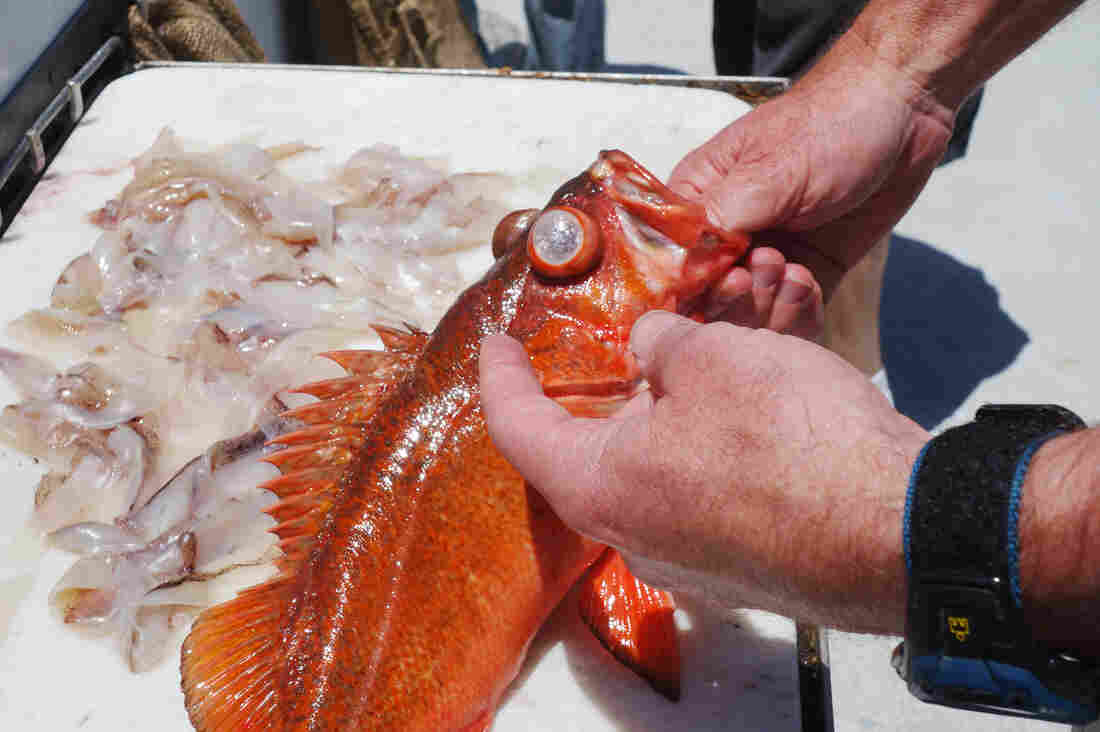 Barotrauma can cause a fish's eyes to pop out of its head and its stomach to be pushed out of its mouth, according to Chris Lowe, a marine scientist at California State, Long Beach. Jon Hamilton/NPR hide caption 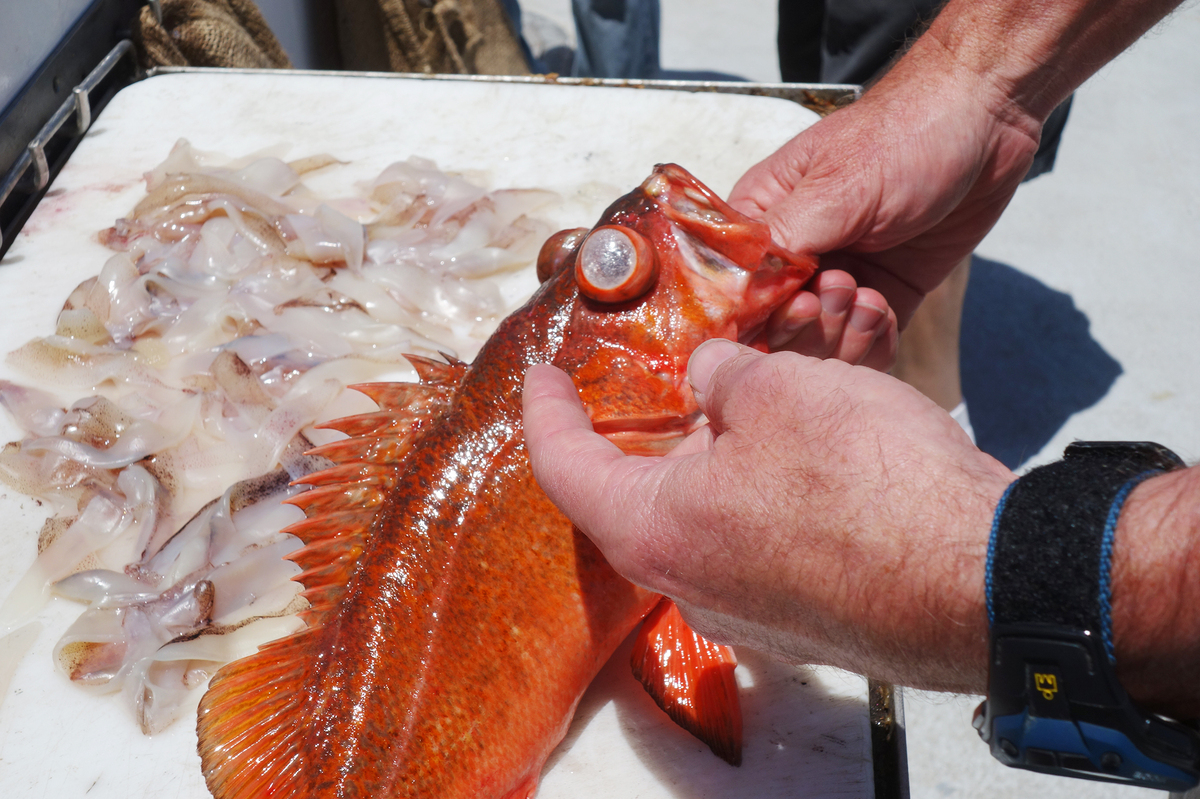 Barotrauma can cause a fish's eyes to pop out of its head and its stomach to be pushed out of its mouth, according to Chris Lowe, a marine scientist at California State, Long Beach.

Each year, sport fishermen unintentionally kill millions of deep-water fish they don't want or can't keep. These fish die even though they are handled gently and released quickly. The reason: a condition called barotrauma, which divers know as "the bends."

The problem occurs in fish that have a swim bladder, an internal balloon that helps them control their buoyancy. When a fish is pulled up, "that balloon rapidly begins to expand as the pressure from the water decreases," says Chris Lowe, a marine scientist at California State, Long Beach. So by the time a deep-water fish reaches the surface, he says, "its eyes could be popped out of its head, its stomach is pushed out of its mouth and it looks absolutely horrific."

Fish experiencing barotrauma are often unable to swim, and they look like they're dead — but they're not. Lowe discovered this about 10 years ago while trying to implant tracking devices in California rockfish.

These rockfish live hundreds of feet below the surface, which is a tricky place to perform minor surgery. So Lowe's team brought the fish to the surface, implanted a tracking device and then quickly sent them back down in cages. Two days later, "we brought the cages back up and all the fish were alive," Lowe says.

Other experiments confirmed that deep-water fish could survive a trip to the surface — if fishermen had a way to send them back in a hurry. The question was how. Scientists didn't know. "So it was really fishermen that came up with many of the ideas on how to get these fish back down," Lowe says. 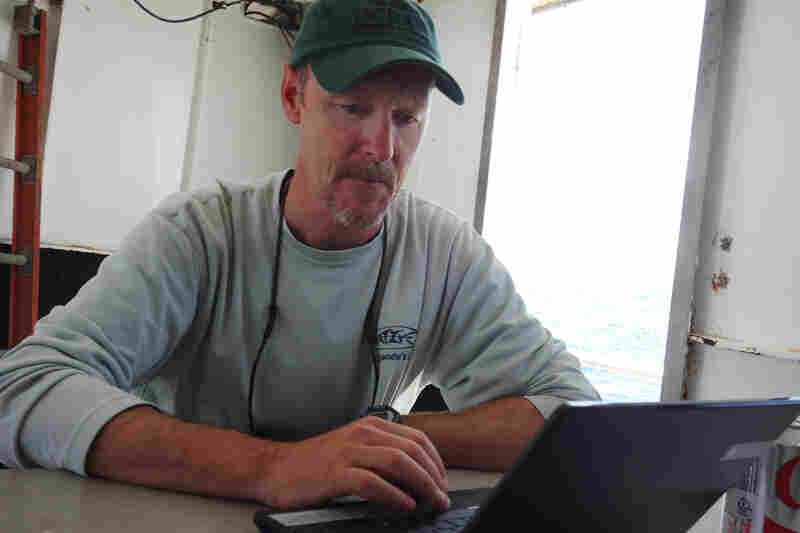 Lowe is trying to make sure people who fish for sport learn how to use descending devices. Jon Hamilton/NPR hide caption 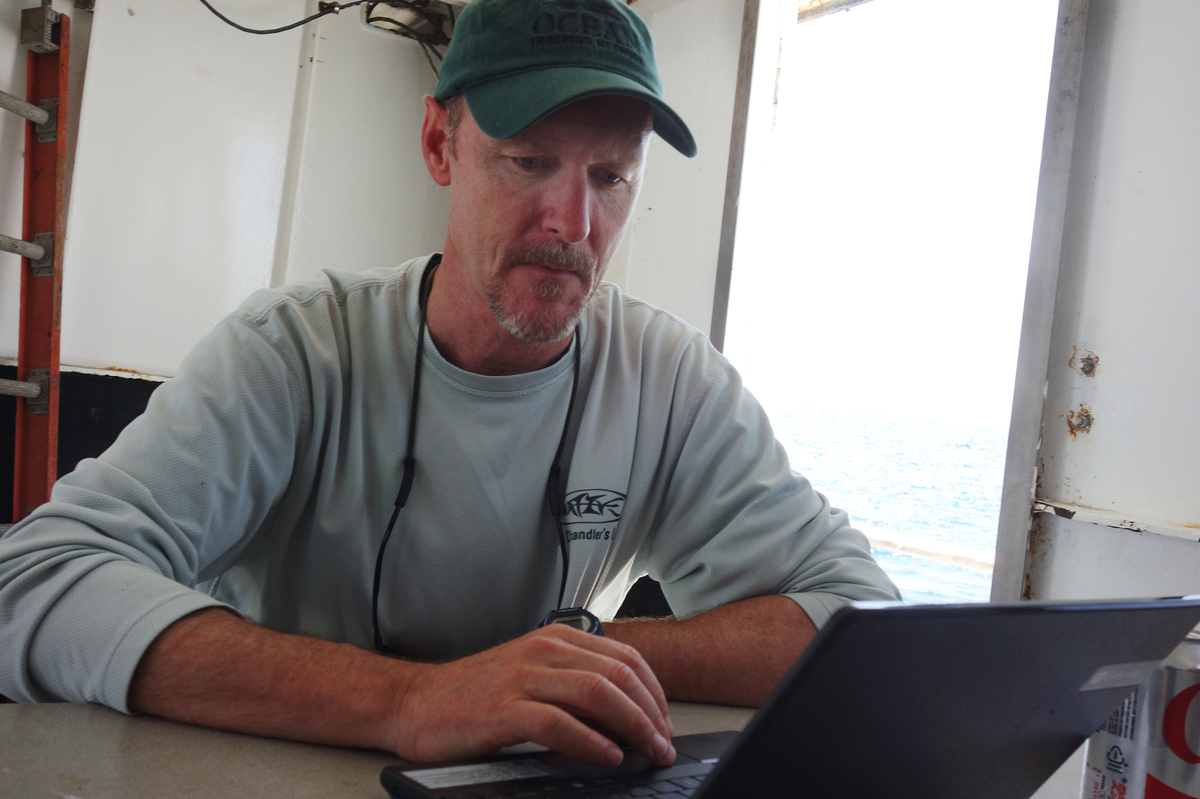 Lowe is trying to make sure people who fish for sport learn how to use descending devices.

The result is a wide range of what are called "descending devices." Some are just upside-down milk crates, while others are commercial products with a pressure-sensitive clamp that releases at a specified depth.

What Lowe is trying to do now is make sure people who fish learn how to use these devices. That's why he and Tom Raftican, president of the Sportfishing Conservancy, have joined a dozen sport fishermen in California as they head out into the Pacific aboard a commercial vessel named the City of Long Beach.

A GoPro video of the descending device in action.

When the boat reaches a reef known for its rockfish, they drop anchor and a dozen anglers bait their hooks. One of them is Nick Mackshanoff, who's been fishing a lot since he retired a few years ago. "If there's water, I fish," he says. "Fresh or salt, bathtubs, oceans, you name it, I fish."

Like a lot of sport fishermen, Mackshanoff is concerned about overfishing and bycatch, fish that are caught unintentionally and die. "Something has to be done," he says, "or 10, 20, 30 years from now there's not going to be any fish. Period."

A video showing how Chris Lowe returns fish to the deep water with the descending device.

Mackshanoff has never used a descending device, but he's seen one on YouTube. "They were using this for calico bass, and it was minimal harm on the fish and quick release back in the ocean again," he tells me. "I think it's kind of neat."

As we're talking, another angler reels in a bocaccio rockfish that's too small to keep and is showing all the signs of barotrauma. He hands the fish to Lowe, who clamps its lower lip to a descending device the size of a pocket knife. Lowe uses a fishing rod to lower the fish, device, weights and a camera into the water.

Later, we watch a video of the rockfish's descent. By the time it is about 50 feet down, the fish's eyes are returning to their sockets and its stomach is no longer protruding from its mouth.

Before long, the fish appears to return to life. "You can see it kicking, it's trying to swim away," Lowe says. Then the clamp releases and the fish is gone. "Another successful release," Lowe says.

The impact of descending devices could be substantial because there are more than 10 million marine recreational fishermen in the U.S. who catch more than 345 million fish a year, Raftican says. And these sport fishermen release nearly two-thirds of the fish they reel in, he says.

So the Sportfishing Conservancy has been running workshops around the nation, explaining how and why fishermen should use descending devices. It's an easy pitch to make, Raftican says, because fishermen want to preserve their sport. "I love to fish, and I'd like to see my kids and grandkids out there fishing too," he says.