Accessibility links
Why Some Chefs Just Can't Quit Serving Bluefin Tuna : The Salt Japanese sushi chefs often can't resist bluefin tuna on offer. Some American chefs can't either, even though conservation groups and marine biologists have been badgering them about bluefin for years. 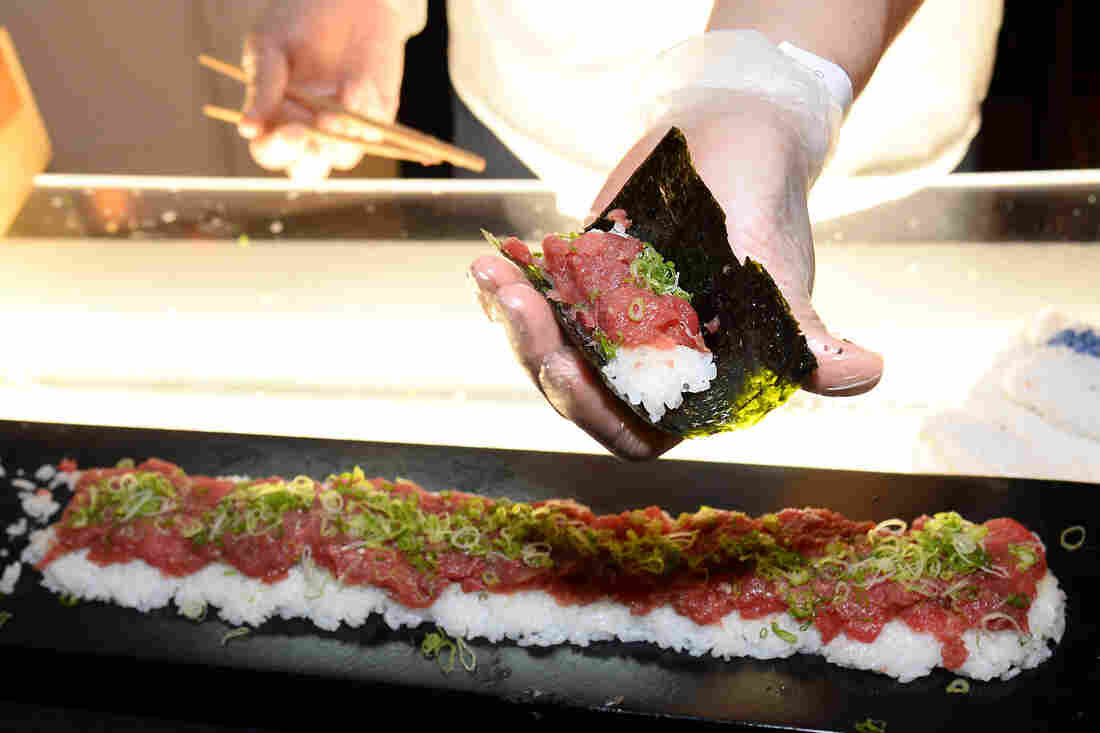 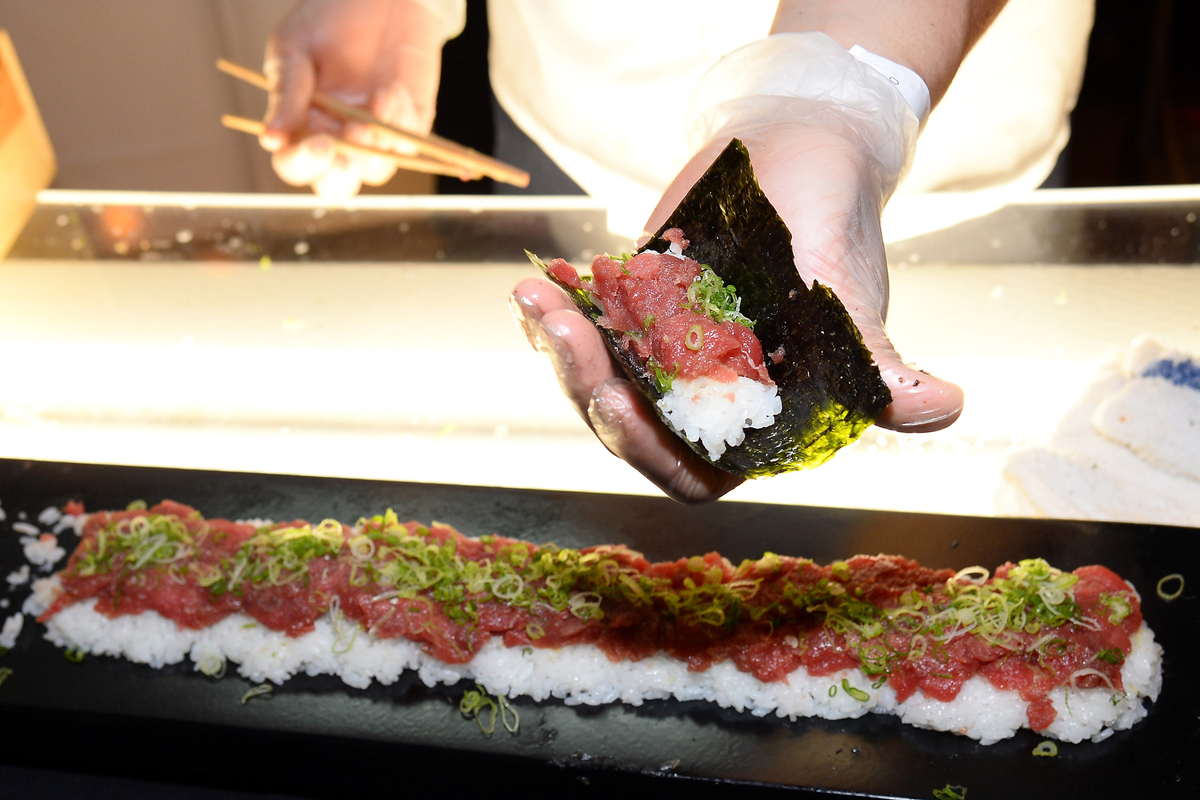 On Monday, a single 380-pound bluefin tuna sold for about $37,500 in the first auction of the year at the Tsukiji fish market in Tokyo. That's far below the peak price of $1.76 million that a bluefin went for at the same market in 2013, and this year's price isn't a good indicator of the supply, or population status. But it is a reminder of the unrelenting hunger and willingness to pay top dollar for the fatty pink flesh of this swiftly disappearing wild fish.

The 2015 inaugural bluefin is bound for a popular restaurant chain in Japan called Sushi-Zanmai, according to wire reports. Japan consumes 80 percent of the world's bluefin, and international conservation groups say that demand from the Asian sushi and sashimi industry is mainly to blame for the rapid decline in bluefin populations in recent decades.

In November, the International Union for Conservation of Nature's Red List moved Pacific bluefin tuna from "least concern" to "vulnerable," which means that the fish is now threatened with extinction. It joins the southern bluefin, which is "critically endangered" — the third, and most threatened IUCN designation — and the Atlantic bluefin, which is "endangered," the second level. In all cases, overfishing is making it nearly impossible for the spawning stock to rebuild the population.

But, just as many Japanese sushi chefs can't say no to the glistening meat on offer, neither can several American chefs — even though U.S. conservation groups and marine biologists have been badgering them about bluefin for years. The media and the food cognoscenti made a big stink about it in 2009, and in 2010, the Center for Biological Diversity launched the Bluefin Boycott, which has garnered 80,000 signatures from people who've pledged not to eat the fish or serve it. (Among the signatories were owners of big-name restaurants like Blue Hill, Chez Panisse and Tataki Sushi.)

But you'll still find tiny morsels of bluefin on tasting menus at glittery sushi restaurants in New York and Los Angeles like Nobu, Morimoto and Masa, and at the Michelin-starred Terra in Napa Valley. It has become a luxury food item — like shark fin or pangolin in Asia. 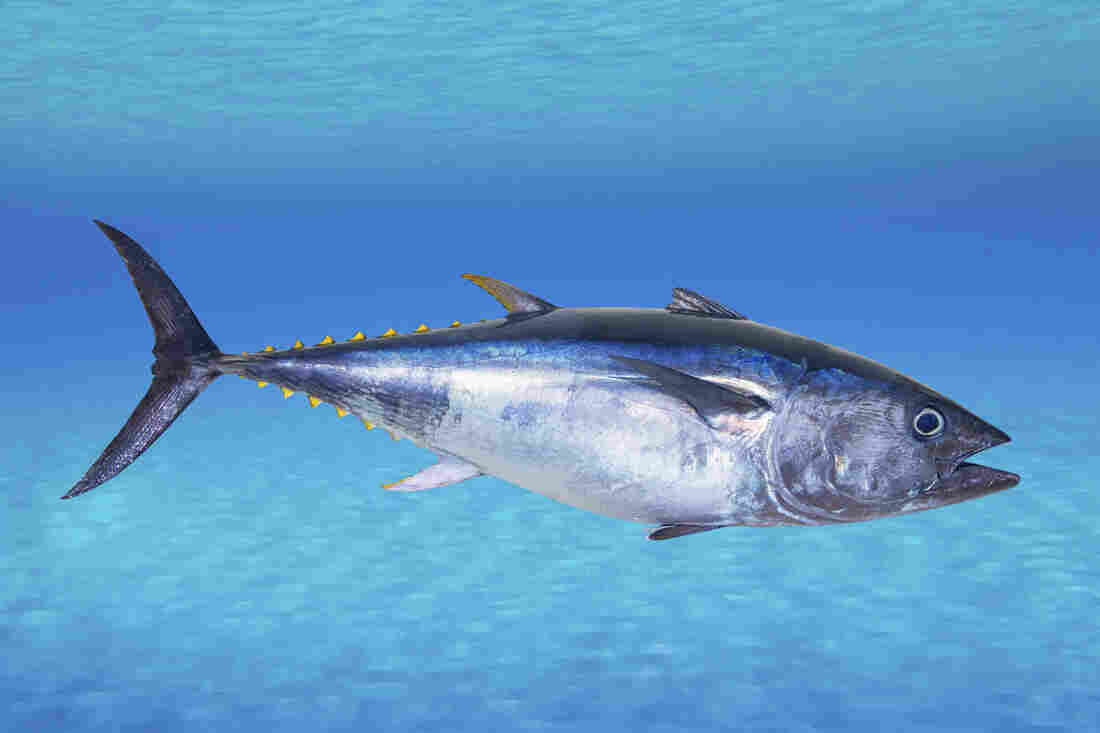 The IUCN says the Atlantic bluefin tuna is endangered. Its stocks have declined globally between 29 percent and 51 percent over the past 21 to 39 years, according to the conservation group. Tono Balaguer/iStockphoto hide caption 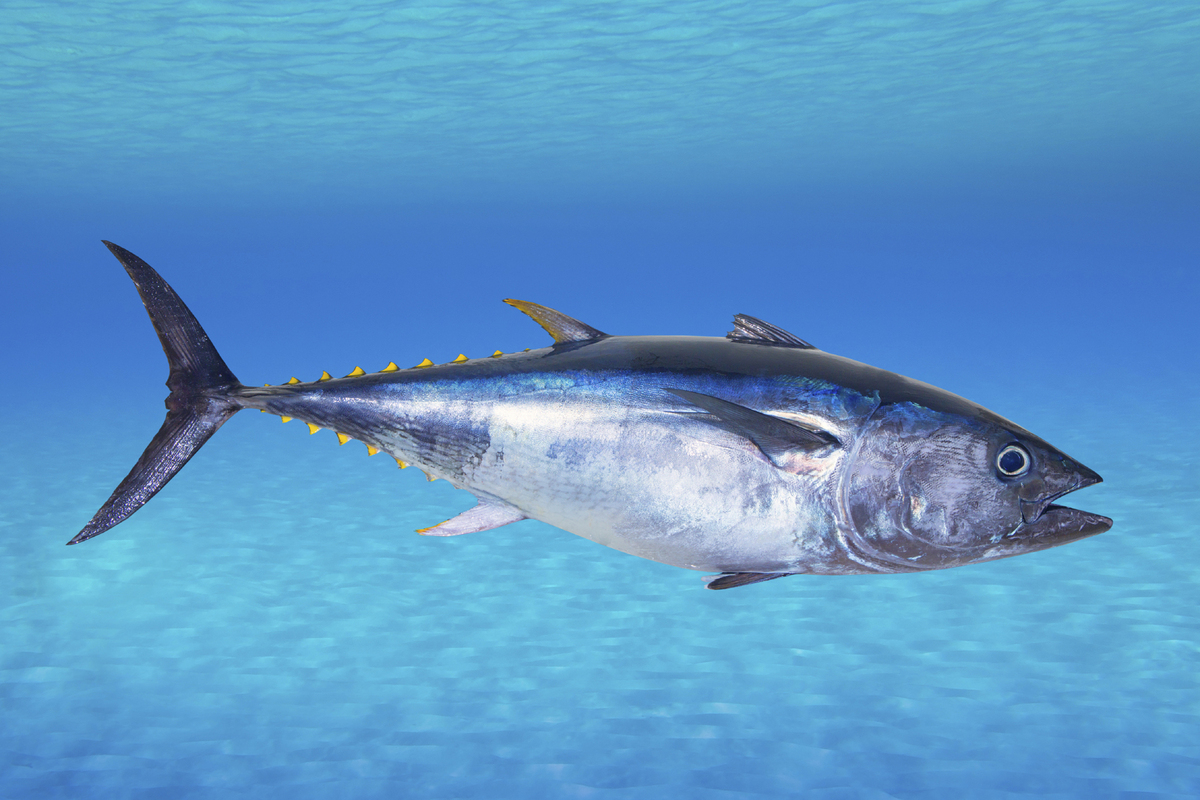 The IUCN says the Atlantic bluefin tuna is endangered. Its stocks have declined globally between 29 percent and 51 percent over the past 21 to 39 years, according to the conservation group.

And we received an invitation in October from Jaleo, one of celebrity chef Jose Andres' Spanish-themed restaurants in Washington, D.C., for a "Tuna Celebration" featuring four dishes with bluefin. (The event was postponed; more on it and Andres later.)

There's one clear reason why it's still on menus: "Bluefin tuna belly is one of the most delicious things in the world," says Bruce Mattel, associate dean of food production at the Culinary Institute of America. But, he says, the decision to serve bluefin is "largely driven by demographics and customer base" — in other words, chefs beholden to people spending hundreds of dollars on a meal.

Chefs at top restaurants can't really play dumb about how few bluefin are left in the sea, Mattel says.

"I think most [chefs] are aware of the conservation issues," Mattel tells us. "I don't know how you cannot be aware if you have a passion for fish."

One internationally acclaimed chef who's aware — and gravely concerned — is Japanese sushi master Jiro Ono, subject of the 2011 documentary Jiro Dreams of Sushi and the chef who prepared sushi for President Obama during a visit to Japan in April 2014. In November, Ono told the Foreign Correspondents' Club of Japan: "I can't imagine at all that sushi in the future will be made of the same materials we use today. I told my young men three years ago sushi materials will totally change in five years. And now, such a trend is becoming a reality little by little." According to the New York Daily News, Ono was referring to his troubles getting high-quality Pacific bluefin, and having to rely on Atlantic bluefin instead.

Mattel of the CIA says he won't order that species of tuna anymore, whether he's dining or cooking. And he's troubled and perplexed by chefs' continued use of it, when there are so many other delicious fish they could be cooking instead. "When you think about the diversity of the oceans, it just baffles that we're so dependent on this species," says Mattel.

We asked the chefs at Nobu and Terra in Napa Valley to explain why they still serve it, but we got no response to our calls and emails.

After repeated requests for an interview, Jose Andres finally sat down with us to explain why he included bluefin on the menu for his Tuna Celebration. The event was postponed last fall, but Andres says he may still host it in May. It will be focused around a ronqueo, a coastal Spanish tradition of carving a whole bluefin tuna in front of an audience.

"What I wanted to do was celebrate the way of life of the people in the Mediterranean, show the disappearing way of life, the ronqueo, the almadraba," he says, referring to the elaborate and ancient system of nets used in small fishing communities. For the celebration, he hopes to bring over fishermen from Galicia, Spain, who catch the fish this way only once a year.

And ultimately, Andres argues, these artisanal fishermen who've been catching Atlantic bluefin their whole lives the same way their grandfathers did, are not to blame for the species' decimation.

"I believe something radical should be done. We should be stopping those [large fishing] fleets following those tunas. If that means also stopping those almadraba in Spain, Turkey, Italy, I will say so ... but I don't believe those almadraba catchers are the problem." (After our interview, Andres said he might not serve bluefin at the tuna event, after all.)

Catherine Kilduff, staff attorney for the Center for Biological Diversity, agrees that the agencies charged with regulating fishing of bluefin haven't set low enough limits for fishermen big or small to allow the populations to recover. And, she says, the fishermen who catch bluefin can still make a lot of money from them.

"Unfortunately, this is an environmental issue that's been very responsive in the past to economics," she says. "There are still people who want to buy it; that's why the price is so high. The only way to break that loop is to have people say they're valuable in the oceans."

But, Kilduff says, eating a tuna caught by an artisanal fisherman in a Mediterranean almadraba isn't any more defensible than eating one caught by a massive Japanese trawler: "The argument that there's a way to catch them that makes it sustainable is kind of a red herring." (This is why some fishermen have decided instead to try and farm bluefin, as we've reported.)

And while American consumers are not the primary consumers of bluefin, their influence still matters a lot, she says.

"Public demand that these fish not go extinct is the only thing that's going to save them," says Kilduff. "Having people go into restaurants [serving it and telling them not to] is probably the most direct way to vote on those issues."