Accessibility links
On His 80th Birthday, Shake It Like Elvis With A Milkshake : The Salt The legendary singer had equally outsized eating habits, including his famous affinity for peanut butter, bananas and bacon. Celebrity chef Sean Brock has created a drink in the King's honor. 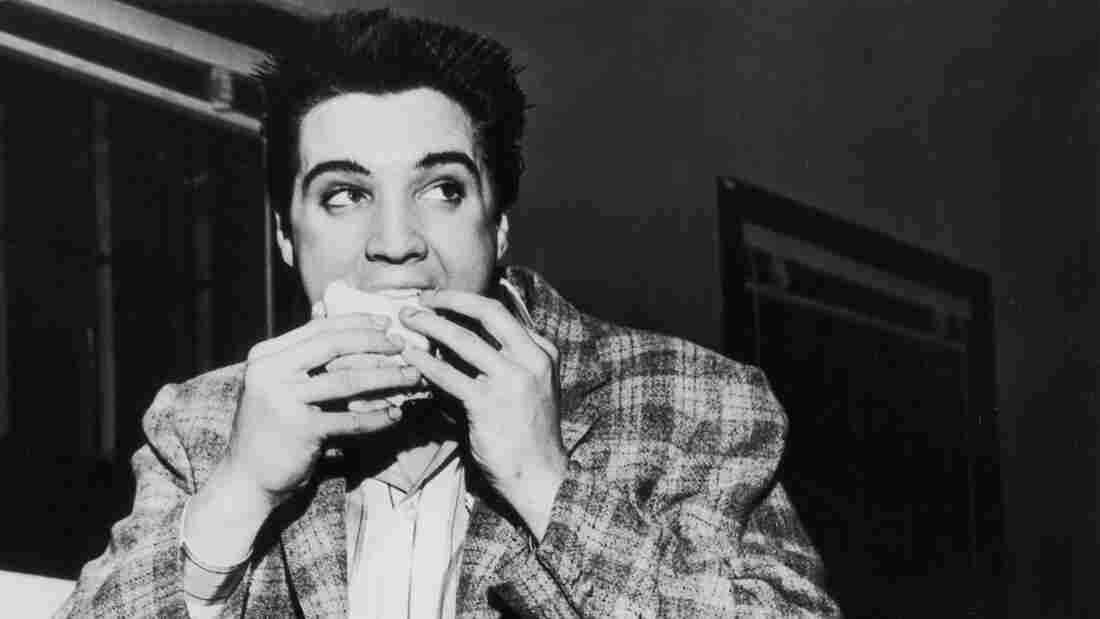 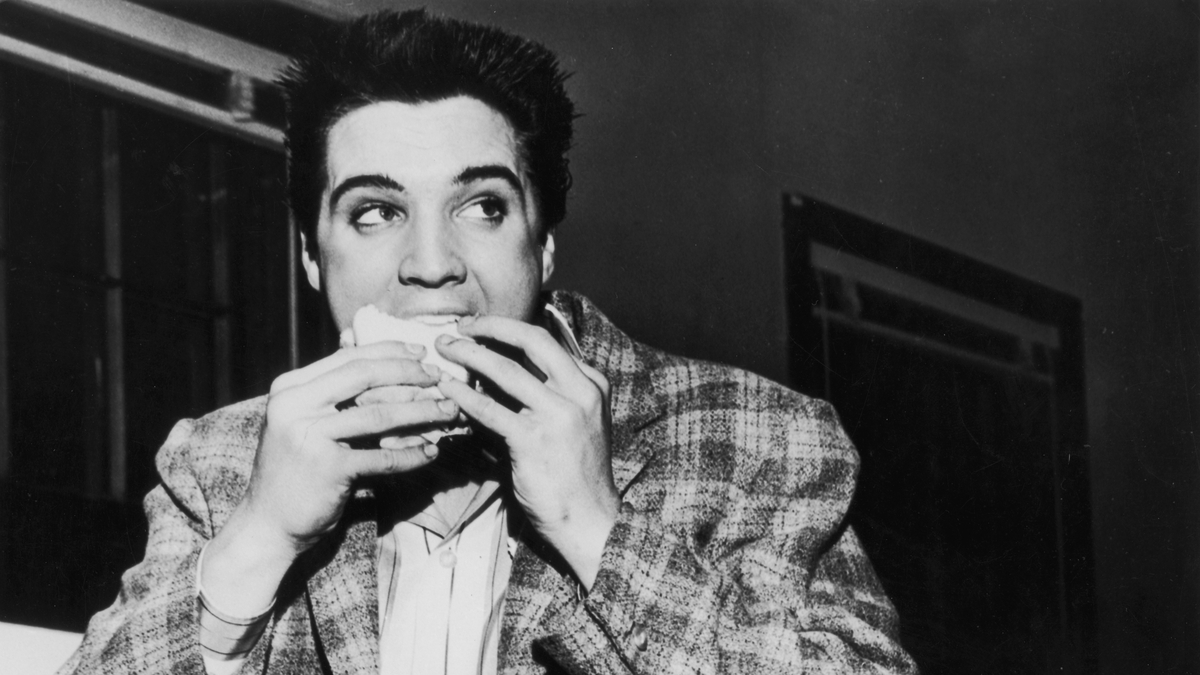 A still-trim Elvis Presley enjoys a sandwich in 1958. His love of fatty foods hadn't caught up to him yet.

Elvis Presley was better known for his music than his gourmet tastes. But he did have a famous affinity for the fried goodness of the American South — and he had the waistline to prove it.

In honor of what would have been the King of Rock 'n' Roll's 80th birthday, let's take a look at some of his legendary eating habits.

Butter seems to have been a frequent part of Presley's diet, contributing to his weight gain before his untimely demise at age 42 in 1977. By that time, "Elvis had long been gobbling drugs and fatty foods," Graeme Wood writes over at the now-defunct The Daily. "But his romance with saturated fat reached a sort of point-of-no-return 18 months before the end, on a chilly night that started at Graceland, his estate in Memphis, Tenn."

Wood recounts the story of Presley's famous flight to Denver one night to get a sandwich that topped even his old familiar favorite. One night in 1976, the King started reminiscing about Fool's Gold Loaf, a sandwich he'd once eaten at the Colorado Mine Company in Denver. It cost $49.95 at the time — $189 in today's dollars, Wood says.

Apparently, Presley's craving was so intense that he and his entourage jumped on his private plane and jetted off for the two-hour ride to Denver — a midnight junk food run that totaled $16,000, says Wood.

As for the calorie count involved, estimates vary: Wood says 8,000 but some estimates have run as high as 42,000! Here's the recipe:

"Take a whole loaf of Italian bread and slice it lengthwise. Hollow it out and slather it with margarine. Then add a whole jar of jelly and a whole jar of creamy peanut butter, creating two large boats of PB&J. Finally, add a whole pound of fried bacon. Before adding the bacon, dab away the grease on paper towels (presumably to avoid adding unnecessary fat and rendering the sandwich disgusting). Then reunite the sandwich halves, deep-fry, and serve."

Far be it from us to advocate anyone eat like Presley (as we've told you before, all that bacon could be the death of you). Still, those curious about the King's other culinary ways can dive into these recipes from the authorized cookbook, Graceland's Table: Recipes Fit for the King of Rock and Roll.

Or you could try a modern interpretation of Elvis' immortal beloved snack — The Elvis Presley Milkshake, from acclaimed Charleston, S.C.-based chef Sean Brock. He shared the recipe for All Things Considered's Found Recipe series.

"I am a really big Elvis fan," Brock tells us.

So one year around Elvis' birthday, he decided to work the flavors of the crooner's favorite snack into the menu at his restaurants. Thus was born the Brock's Elvis Presley milkshake, a blend of ripe bananas, peanut butter, vanilla ice cream and bacon fat. It also has a dash of bourbon — which, Brock says, "we added for our own personal amusement."

"[I]t was kind of weird, especially with the bacon in the milkshake, but it turned out to be delicious," Brock says. Listen to All Things Considered's story later for more details, but here's the recipe if you just can't wait.

From Come In, We're Closed: An Invitation to Staff Meals at the World's Best Restaurants

In a large skillet over medium-high heat, fry the bacon until very crispy, about 6 to 8 minutes. Drain the bacon on paper towels. Reserve the rendered bacon fat separately, allowing it to cool slightly.

Place the bananas, peanut butter and bourbon in a blender. Add the cooked bacon and 3 tablespoons of the reserved bacon fat and blend until smooth, about 45 seconds, scraping down the sides if necessary. Add the ice cream and pulse to incorporate into a smooth shake, about 30 seconds. If you'd like, you can also incorporate the ice cream by hand by mixing it in with a whisk or an immersion blender; this will help keep the shake in a more frozen state. Serve immediately. Transfer any extra shake to a lidded container and reserve in the freezer. Because the alcohol prevents it from completely freezing, it turns into a scoopable ice cream.