Accessibility links
Out Of the Shadows And Onto Menus: Foie Gras Is Back In California : The Salt Chefs across California are celebrating a judge's decision to end the state's ban on the sale of foie gras. Many had continued to serve the delicacy, made from fatty duck or goose liver, illegally. 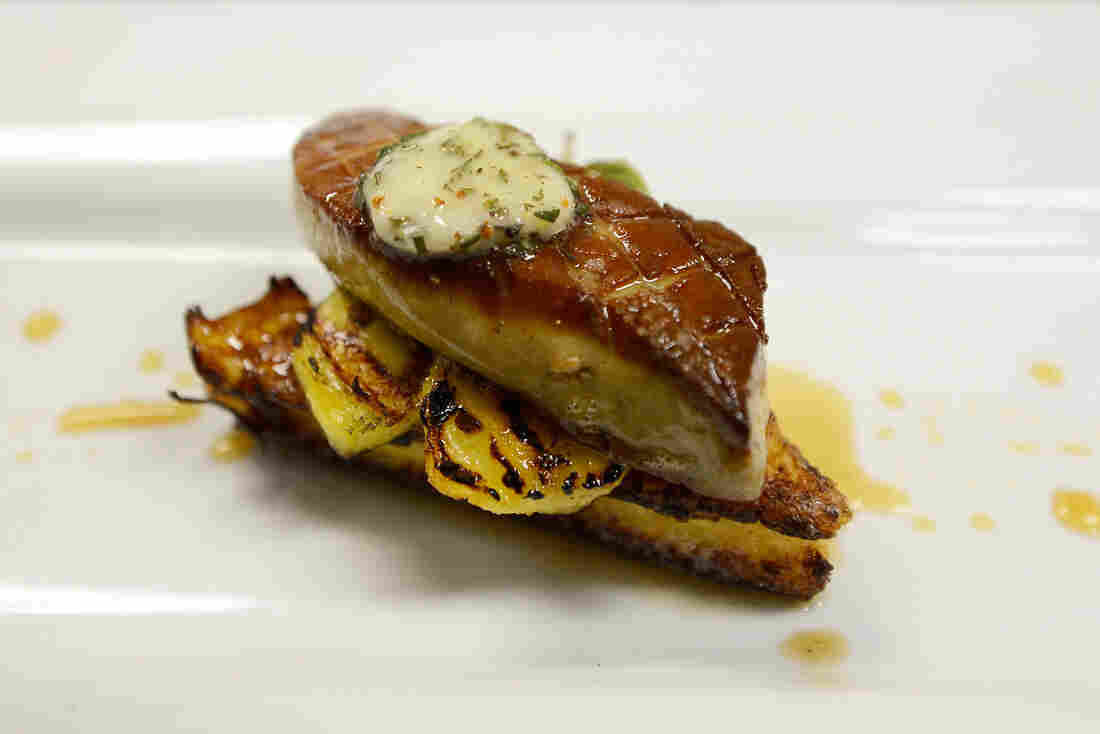 A foie gras dish is prepared at Hot's Kitchen during a "Farewell Fois Gras" event in June 2012 in Hermosa Beach, Calif. The restaurant was one of three plaintiffs that filed suit after the ban went into effect, and it has been serving free foie gras to guests ever since. Kevork Djansezian/Getty Images hide caption 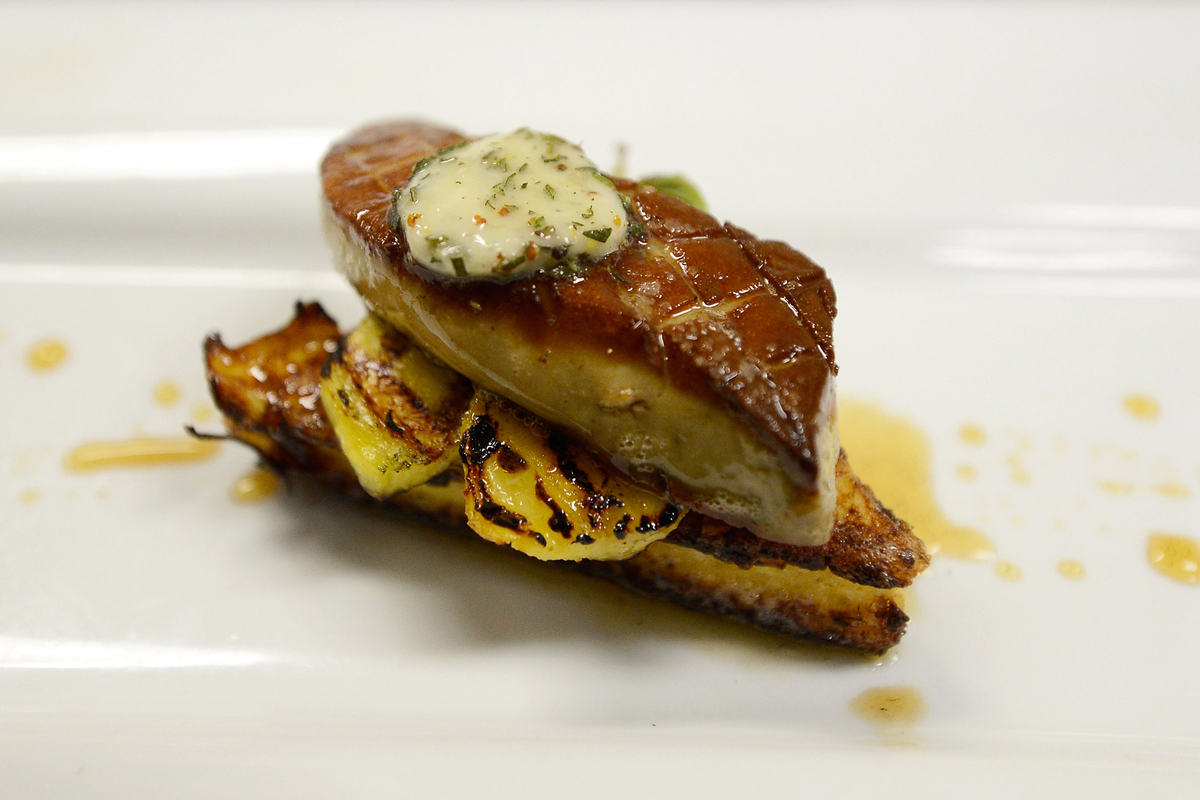 A foie gras dish is prepared at Hot's Kitchen during a "Farewell Fois Gras" event in June 2012 in Hermosa Beach, Calif. The restaurant was one of three plaintiffs that filed suit after the ban went into effect, and it has been serving free foie gras to guests ever since.

Foie gras, the luxe delicacy made from fatty duck or goose livers, is no longer contraband on California menus.

A federal judge on Wednesday lifted a statewide ban on the sale of foie gras, which is made from the engorged liver of ducks or geese that have been force-fed to create the food's signature rich, creamy taste.

Animal rights activists have long denounced foie gras as a product of animal cruelty. In 2004, California voters approved a ban on the production and sale of foie gras in the state, but it didn't take effect until eight years later. Now U.S. District Judge Stephen V. Wilson has ruled that the ban clashes with an existing federal law that regulates the sale and distribution of poultry products.

The three plaintiffs in the case include two foie gras producers and Los Angeles-based Hot's Restaurant Group, which filed suit the day after the ban took effect in 2012.

Indeed, Hot's Kitchen, based in Hermosa Beach, Calif., is among the many restaurants in the state that have been skirting the ban ever since it took effect, illicitly stashing and serving foie gras. Chefs and foodies likened the ban to Prohibition, and "duckeasies" popped up to satisfy demand for foie gras, which usually sells at a premium in high-end restaurants. But by offering it free as a gift from the kitchen, restaurants argued they weren't "selling" foie gras or violating the ban.

CALI FOIE BAN OVERTURNED . GOOD THING I ALWAYS HAVE IT ANYWAY!!! We have lots of FOIE gras for tonight… http://t.co/qQNfQ33gw5

After Wednesday's announcement, Bazirgan quickly created a four-course foie gras tasting menu that sold out within a few hours. "We were slammed and the chef sold out, but we're doing it again tonight," Jamie Law, public relations manager for Dirty Habit, tells The Salt.

Animal rights groups have vowed to appeal. People for the Ethical Treatment of Animals President Ingrid Newkirk says force-feeding ducks and geese is akin to torture and won't be tolerated.

"A line will be drawn in the sand outside any restaurant that goes back to serving this "torture in a tin," and whoever crosses that line identifies themselves with gluttony that cannot control itself even to the point of torturing animals," Newkirk told us in an email.

The state has not said whether it will appeal the decision. A representative from California Attorney General Kamala Harris' office told us, "We are reviewing the ruling."

Meanwhile, restaurants from Los Angeles to San Francisco are offering celebratory treats, from seared foie gras on a stick wrapped in pink cotton candy to foie gras and beef burgers.

Celebrity chef Thomas Keller, who has been a vocal opponent of the ban, said both of his Yountville Calif. , restaurants, The French Laundry and Bouchon, will start serving foie gras again this spring.

"We are thrilled to be offering our guests the opportunity to enjoy this delicacy again," Keller said in a statement.

It is still illegal to produce foie gras in California, but Wednesday's ruling makes it legal to sell it, which means the state's restaurants are free to import it.

Although a handful of celebrity chefs, including Wolfgang Puck, oppose serving foie gras, most welcomed the recent news.

"It's like a right of passage to be able to serve it," says Chef Josiah Citrin of Melisse, a French restaurant in Santa Monica with two Michelin stars. "It'll be on our menu all this week."