Accessibility links
How Do We Grow To Like The Foods We Once Hated? : The Salt A psychologist says we have to be taught to like chili pepper and other foods we may initially dislike. The experience of eating it often somehow converts what's an aversion to a preference, he says.

How Do We Grow To Like The Foods We Once Hated?

How Do We Grow To Like The Foods We Once Hated? 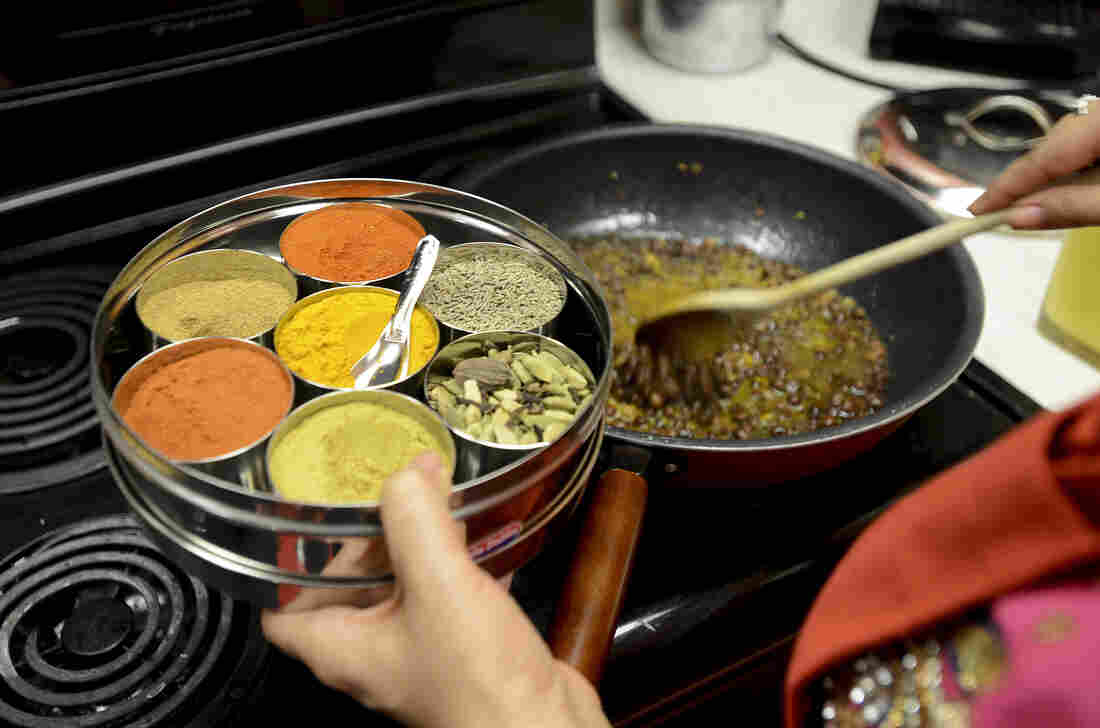 Jasjit Kaur Singh, an Indian chef, cooks kaala channa, a traditional spicy Sikh dish. A psychologist says that children who grow up in cultures with lots of spicy food are taught to like spice early on. Richard Lautens/Toronto Star via Getty Images hide caption 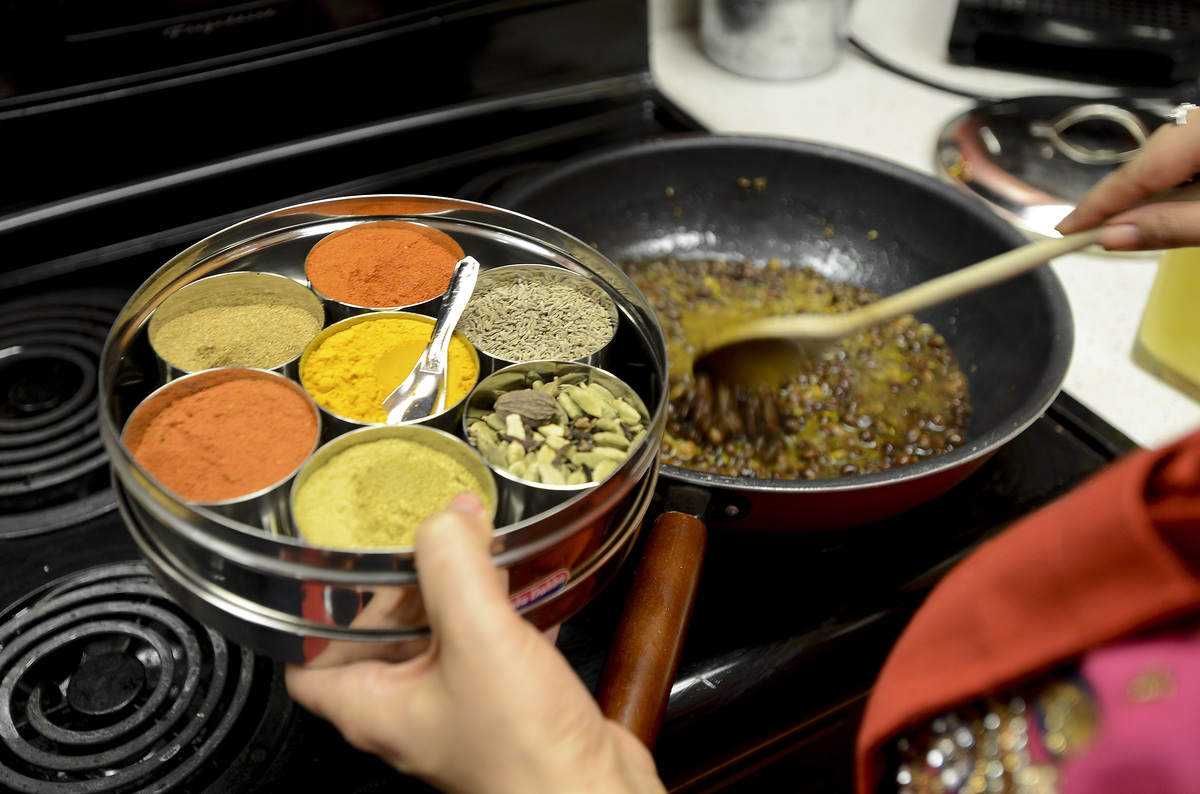 Jasjit Kaur Singh, an Indian chef, cooks kaala channa, a traditional spicy Sikh dish. A psychologist says that children who grow up in cultures with lots of spicy food are taught to like spice early on.

Why do some of us like to slather hot sauce or sprinkle chili powder onto our food, while others can't stand burning sensations in our mouth?

It probably has to do with how much we've been socially pressured or taught to eat chili, according to Paul Rozin, a cultural psychologist at the University of Pennsylvania who has studied attitudes toward food for decades.

We first read about Rozin's research on spicy food in Tasty: The Art and Science of What We Eat. It's a new book by John McQuaid that's been excerpted in the Wall Street Journal and was featured Sunday on Weekend Edition.

We asked Rozin to tell us more about his work on spice tolerance. Here's part of our conversation, edited for brevity and clarity.

How did you get interested in researching spicy foods?

The chili pepper is a subject of great interest to the public because so many can't stand [it].

My wife, Elisabeth Rozin, had written a book called Ethnic Cuisine, in which she proposed a theory of cuisine: that most cuisines in the world except in northern Europe have a characteristic flavor that they put on all their foods.

And that flavor in Mexico is chili and it is on virtually every savory food they eat. Chili pepper, when it came to Europe, tasted so bad. So this terrible-tasting food comes over along with potatoes and tomatoes and all these other relatively good ones, and it becomes a major flavoring in the cuisines of West Africa, of South Asia and a good part of Southeast Asia. And it makes their food taste better to them.

So I got curious about how the hell that happened.

I lived in a village [near Oaxaca, in southern Mexico] for a month and saw how they dealt with their chili peppers, how they served their meals. It was a traditional village that just had gotten electricity; nobody had a refrigerator. I discovered that at about 4 or 5 years old, the kids started liking [chili]. In the village of 1,500 people, everyone over the age of 4 or 5 loved hot chili.

Now, the animals in the village, the dogs and the pigs, eat the garbage. So they're eating hot chili every day because that's in the sauce on everything. And I couldn't find a single animal in the village — I tested a few (by giving the pigs and dogs a choice between a cheese cracker and a cracker with hot chili sauce) — that preferred the one with chili.

I thought that was a really interesting finding. And I think that this is a very special human characteristic — the ability to overcome an innate aversion and make it into a pleasure.

How do you think we overcome these aversions?

What's going to the brain is the same; there's no change in the tongue or the mouth, so it's what we call a "hedonic reversal."

It's not just in food, but coffee is bitter, and there's a lot of foods that we eat that little kids don't like — beer, etc. But we also like amusement park rides, we like to be scared, we like to cry at movies. This is an example of a very common thing in humans.

I call it "benign masochism," which is to say that we learn to like things that our body rejects. And it's benign because it doesn't hurt us.

That's interesting that we grow to like these things we first hate.

It's like getting to like smoking — when you first smoke, it's terrible. But you [may] keep going because there's social pressure. And that pressure gives you enough experience ... and somehow with that experience it usually inverts.

For some people it inverts pretty quickly. In my case, I like hot food now, but moderately hot. It took me many, many years of trying to like it, which just meant eating a lot of it. The same is true for me with beer — beer was too bitter for me. But I kept drinking it and now I like it. So I don't know what happened.

What's the most surprising thing about your findings to you?

The surprising thing was what got me to do it in the first place — that something that tastes so bad becomes [people's] favorite food. As I say, it's not just about chili pepper — it's about black coffee and ginger root and horseradish. And hot-temperature food and cold food: Most people don't like really cool food like ice water; that's a Western thing to drink beverages that are cold. Little kids don't like them.

I'm less interested in chili now than in the whole phenomenon of across cultures about how people get to like these very unpromising things. But I don't know the answer. Some part of it is social. Social forces affect what we like, and the advertising industry knows that — that's why they have endorsements by famous people.

I'm interested in that the Chinese and Southeast Asians think we're crazy for liking cheese, but they eat rotted soy and fish in their sauces.

I had an experience at a Korean restaurant in New York. I was there with my first wife and we were sitting in there, and someone next to us, Korean people, ordered something that looked really good. We're food adventurers so we said to the waiter, "We want that." And he said, "You don't want that." And we said, "Yes, we do." And he said, "No, you don't." Well, of course we won and it came out, and it was so hot that we could barely eat it. And we forced it down because we had established our credentials, so we had to eat it.