Accessibility links
Philadelphia Pizza Lovers Pay It Forward One Slice At A Time : The Salt A Philadelphia pizza shop has become an ad hoc feeding program for the homeless where customers can pay the $1 slices forward. To date, some 8,400 slices have been bought for the homeless. 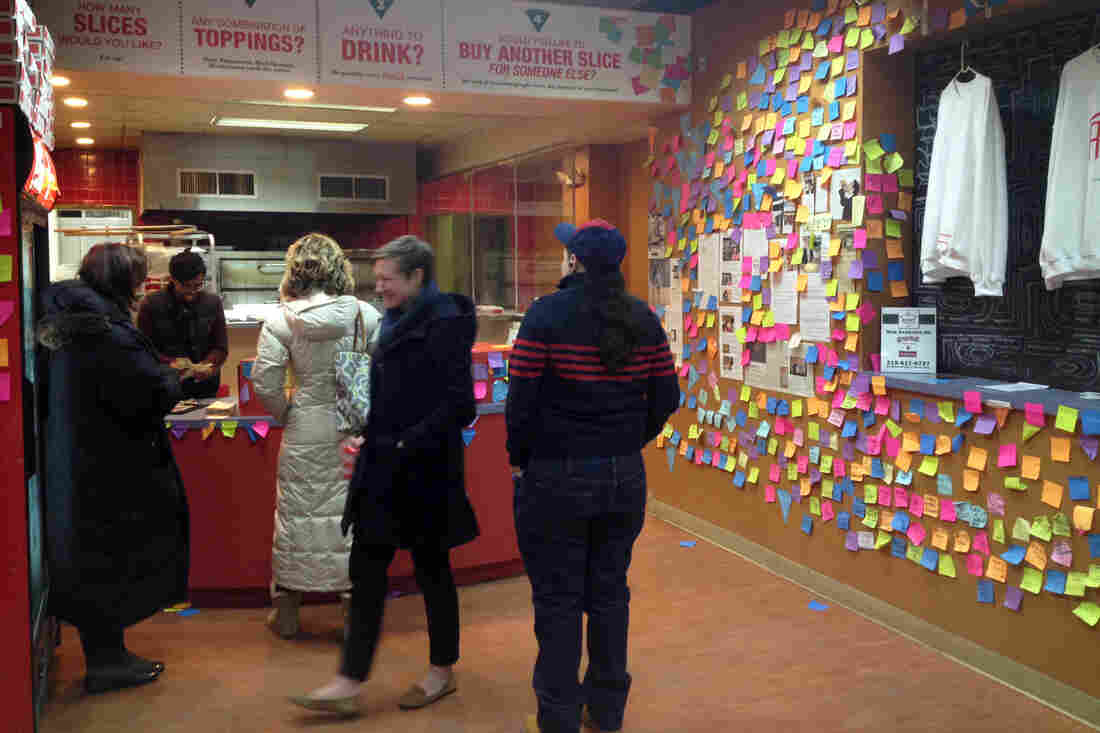 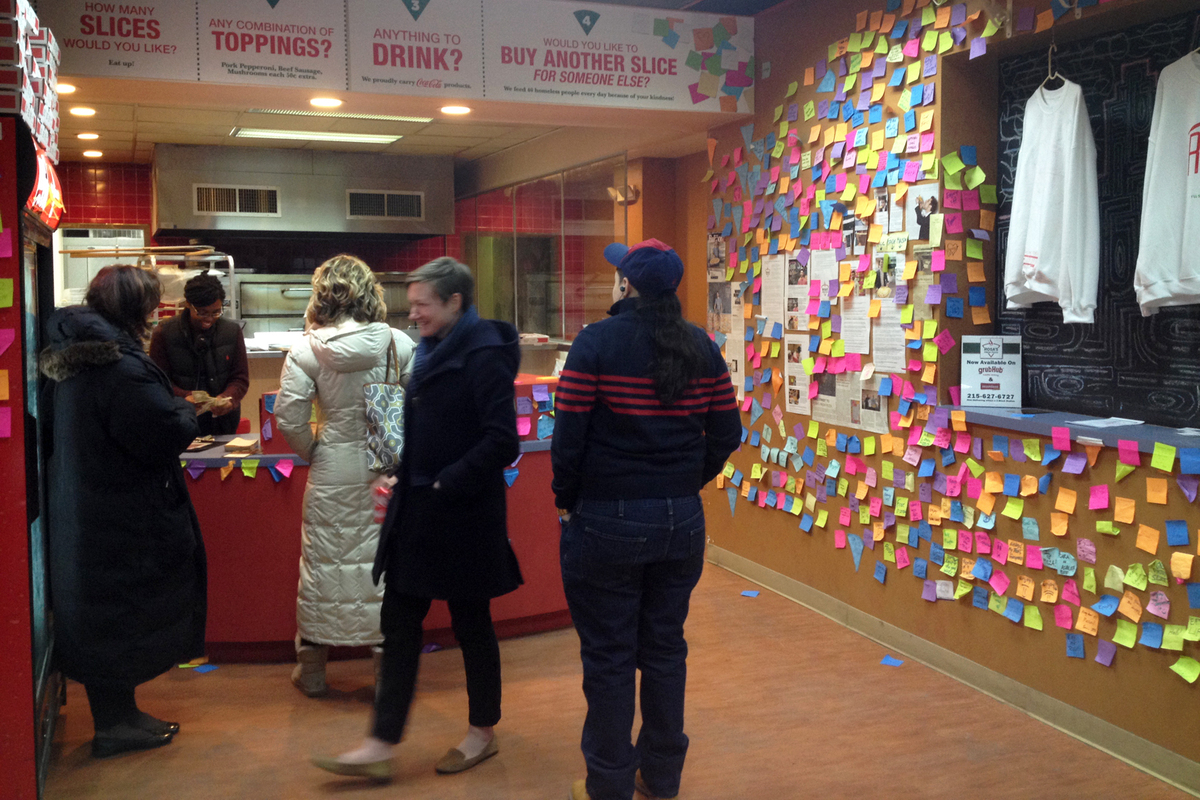 The lunchtime rush at Rosa's Fresh Pizza in Center City Philadelphia, where customers pay extra money to buy slices for the homeless.

Some pizza restaurants decorate the walls with signed photos of minor local celebrities who once stopped by for a slice.

At Rosa's Fresh Pizza in Philadelphia, the shop is adorned with Post-it notes and letters. The messages are from customers who gave $1 so homeless members in the community could get a slice, which costs $1.

"The homeless, they come in and say, 'I hear you give out free pizza to homeless people,' " owner Mason Wartman tells The Salt.

The pay-it-forward pizza program started about a year ago, Wartman says, when one paying customer asked if he could buy a slice for a homeless person. "I said, 'Sure.' I took his dollar and ran out and got some Post-it notes and put one up to signify that a slice was purchased," he recalls.

Over the past nine months, Wartman says, clients have bought 8,400 slices of pizza for their homeless neighbors. He kept track of the prepaid slices with Post-it notes on the walls until he hit about 500 free slices. Then the accounting system became untenable. He now keeps track at the register.

But his customers — both paying and nonpaying — keep sharing their motivations and their thanks in writing. On the notes and papers hung around the shop there are messages like, "I just want to thank everyone that donated to Rosa's; it gave me a place to eat everyday and the opportunity to get back on my feet. I start a new job tomorrow!" 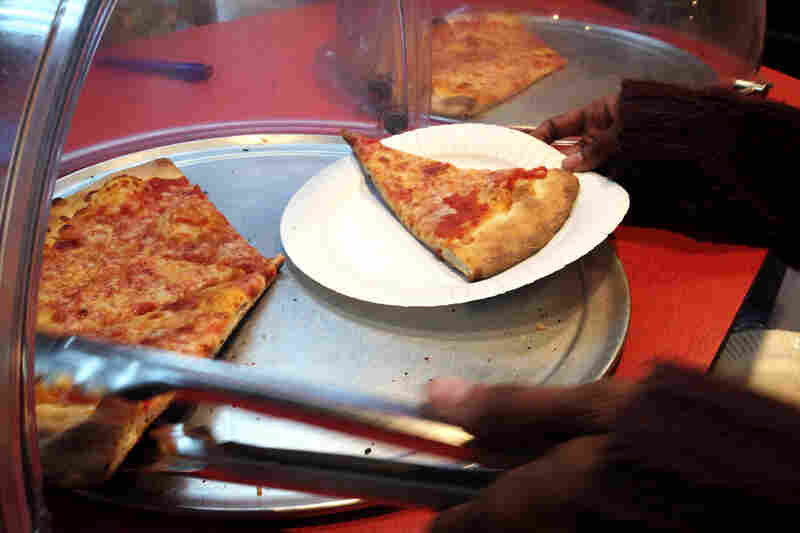 Slices of pizza on the counter of Rosa's Fresh Pizza, where customers are encouraged to pay it forward. Elizabeth Fiedler/WHYY hide caption 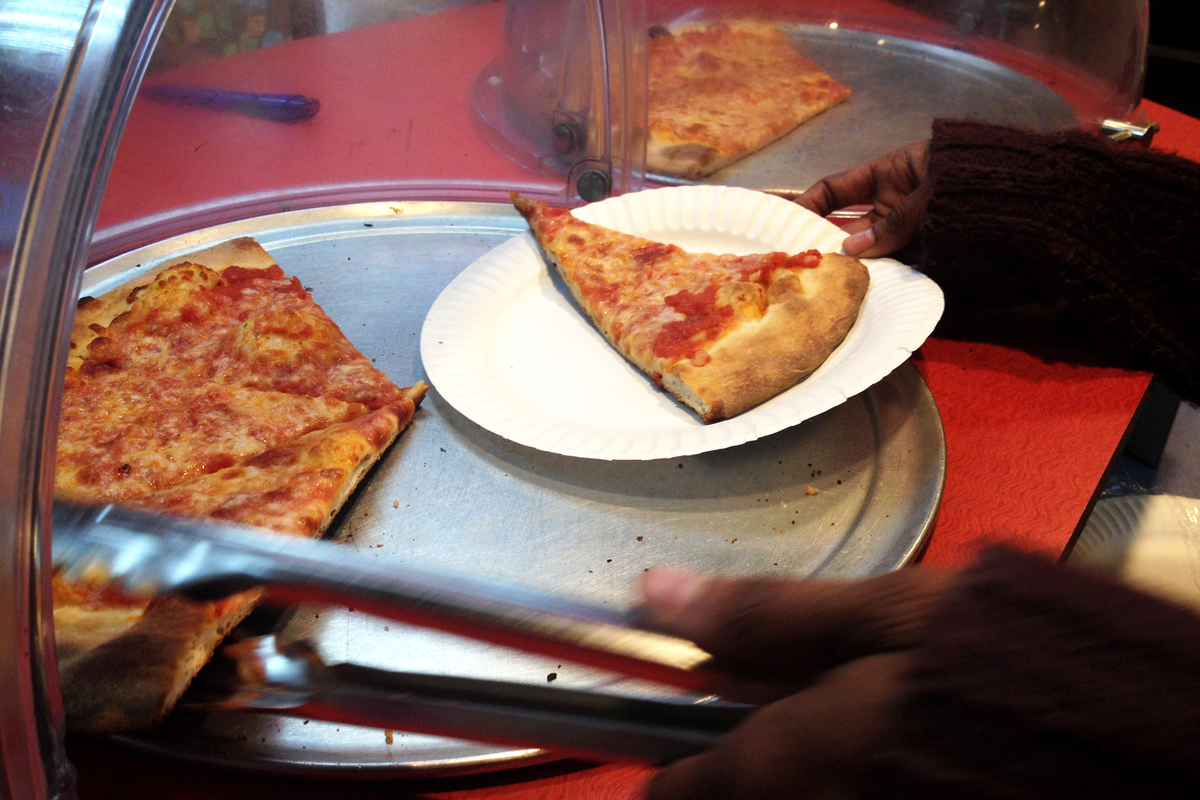 Slices of pizza on the counter of Rosa's Fresh Pizza, where customers are encouraged to pay it forward.

Wartman says the customer who started it all was inspired by a practice in Italy called "suspended coffee" where customers purchase an extra cup for someone who can't afford it.

Pay-it-forward generosity isn't limited to Italian cafes or one Philly pizza shop. Even mega-chains, including the bakery and sandwich chain Panera, have gotten into the giving act.

At five "Panera Cares" locations across the country, there are no set menu prices. In a written statement, Panera spokesperson Kate McConnell tells The Salt that the cafes "provide suggested donation amounts for all menu items to help guide those who would like to 'pay it forward.' " She says the money collected is used to cover the operating costs of the cafes, "while also covering the cost of the meals for those who come in and are unable to contribute the suggested donation amount."

Other chains' pay-it-forward systems have grown organically. Starbucks Coffee Co. spokeswoman Sanja Gould says the company doesn't have a formal system in place, but some customers ask to pay for others and some store partners may encourage customers to do so verbally. 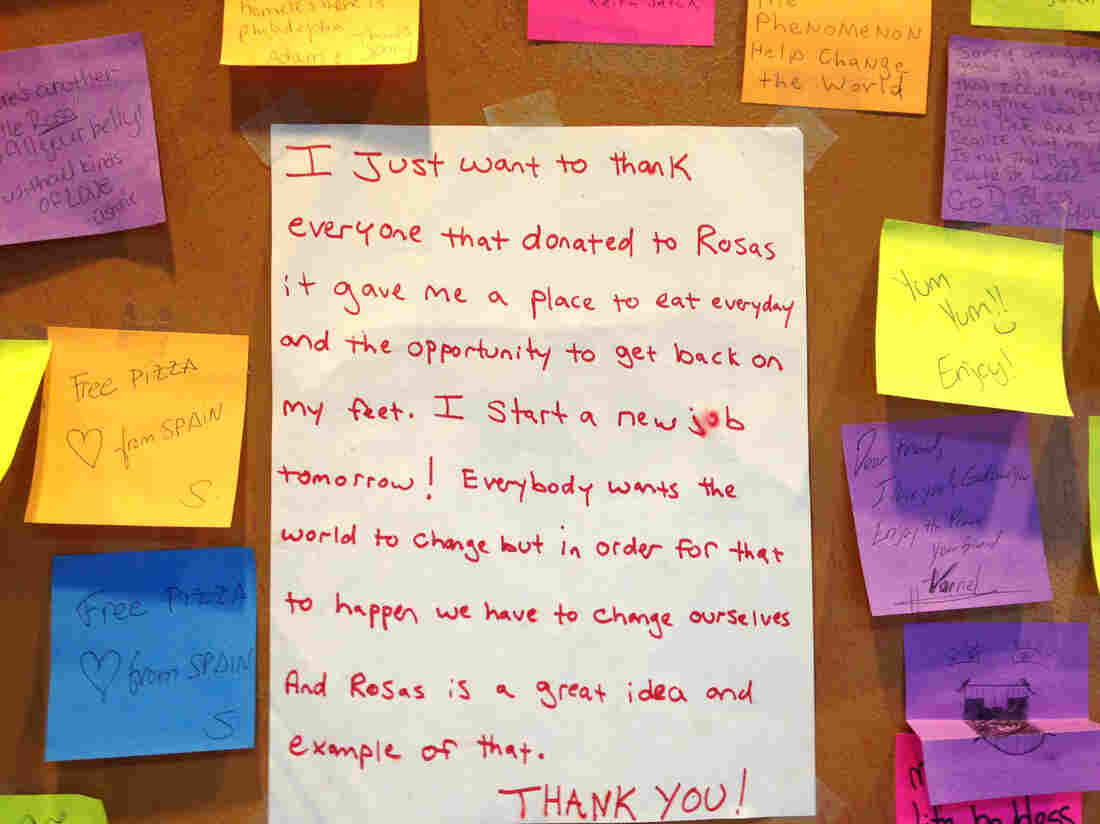 Messages adorn the walls of a Philadelphia pizza shop where customers pay an extra $1 to feed a person who is homeless. Courtesy of Mason Wartman hide caption 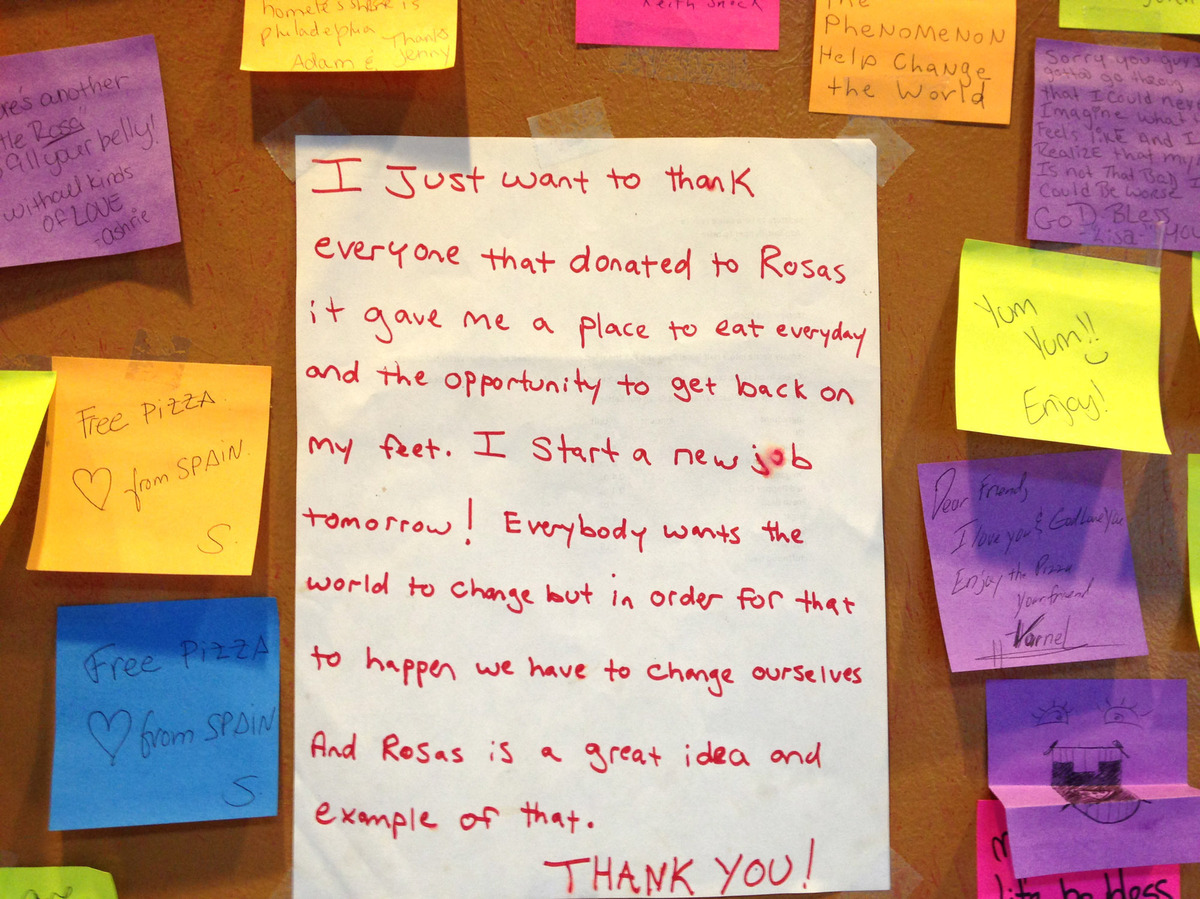 Messages adorn the walls of a Philadelphia pizza shop where customers pay an extra $1 to feed a person who is homeless.

"It happens for Starbucks all around the world," she says.

The latte-giving spans a huge range. Gould says some people just offer to pay for the person behind them in line, while others "might load a certain dollar amount onto a Starbucks card and the store partners have it on hand and they keep adding to it as the line goes on."

Gould points to an impressive example: More than 1,000 customers at a Connecticut Starbucks paid it forward on Christmas Eve in 2013.

Wartman says the pay-it-forward method at his tiny Philly pizza shop has made him think about customers' motivations.

"They're just really nice people, you know? Sometimes homeless people buy them for other homeless people." He says people want to help but aren't sure what to do.

"This is a super-easy way, a super-efficient way and a super-transparent way to help the homeless."

Wartman doesn't need to advertise, and he is receiving enough "paid forward" pizza that he does not have to turn away any of the homeless people who come in. He says word has spread within Philadelphia's homeless community, and each day 30 to 40 homeless people come in asking for a free slice.