Accessibility links
Food Trucks, Share The Lane. Food Bikes Are Merging Into The Business : The Salt A growing number of food vendors are literally pedaling their wares. From baristas to veggie farmers, many say bikes are a cheaper, greener, more convenient way to launch their mobile food businesses. 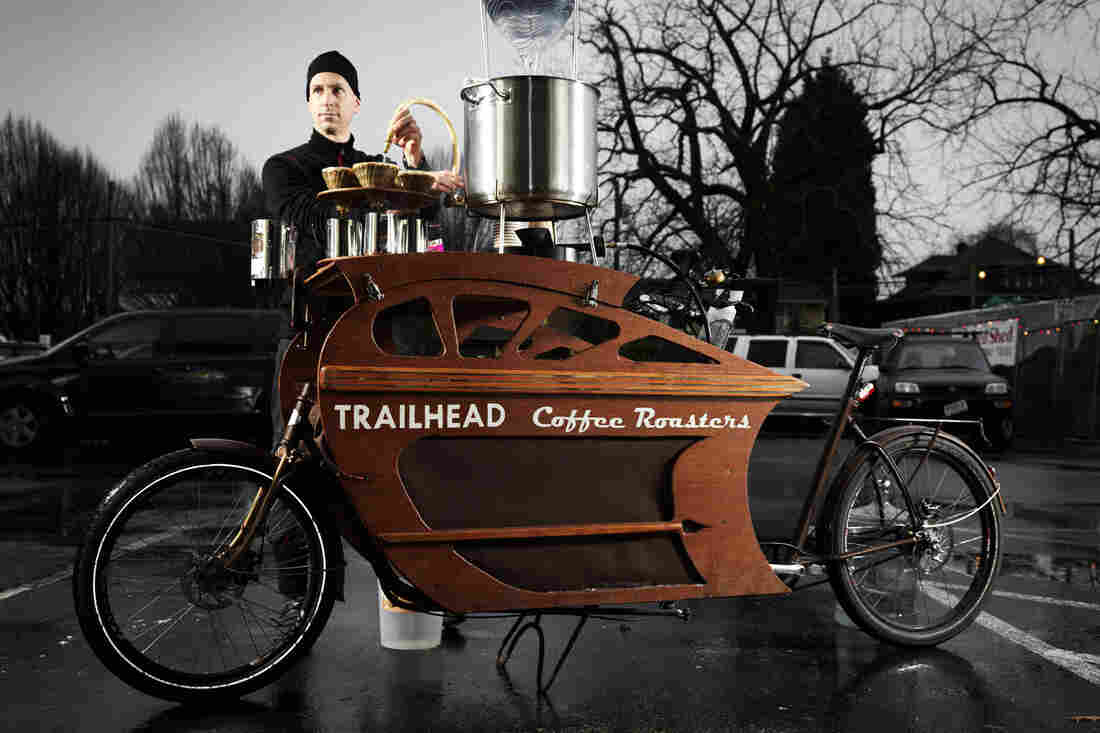 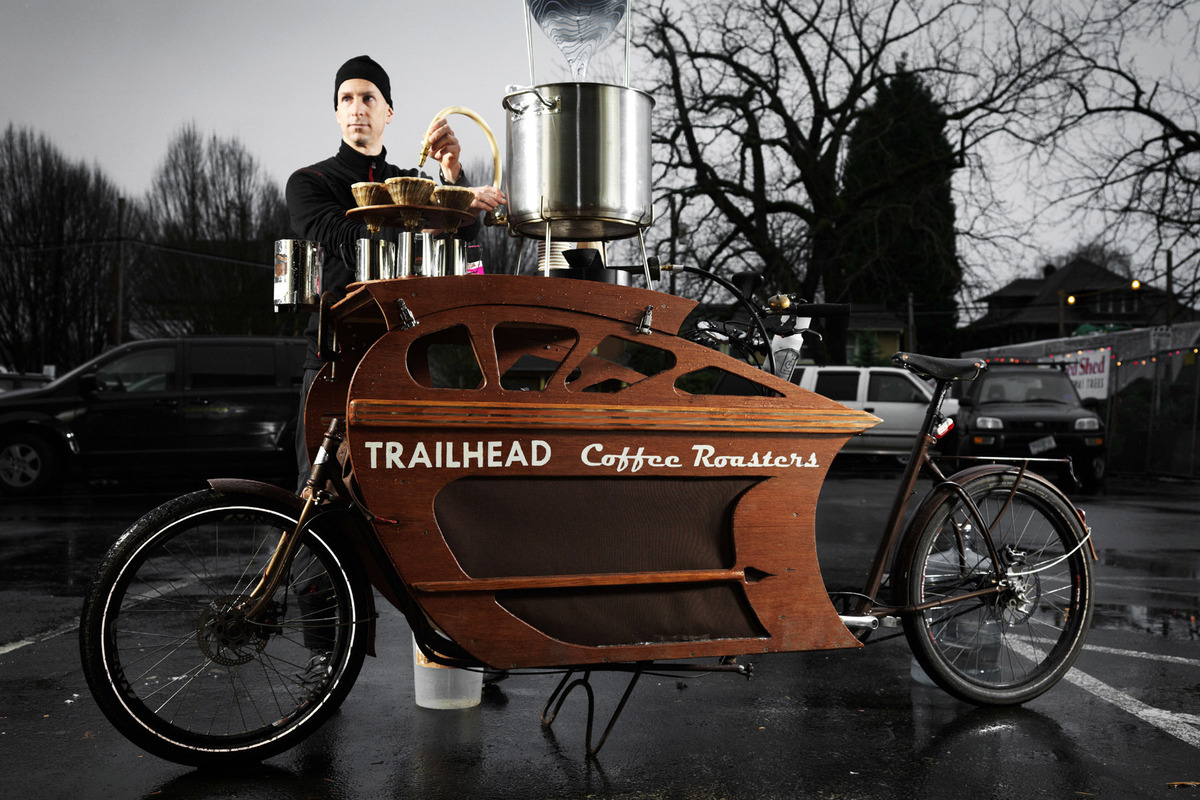 Charlie Wicker of Trailhead Coffee Roasters makes all of his deliveries within the 6-mile radius of urban Portland, Ore., on one of his custom-built cargo bikes. He can also pull over to brew and serve coffee.

When upscale food trucks roared into popularity a few years ago, the folks running them praised their rolling operations as far cheaper and simpler to launch than a bricks-and-mortar restaurant.

Brewers, chefs, baristas and even farmers are turning to pedal-powered vehicles to bring their goods to consumers — and, sometimes, actually produce them on the street.

The environmental benefits of ditching a motor are obvious — fewer emissions into the urban air. It also makes sense financially: A fully outfitted food bike costs just several thousand dollars — a fraction of the price of a food truck, which runs tens of thousands.

But the main appeal, it seems, is far simpler. 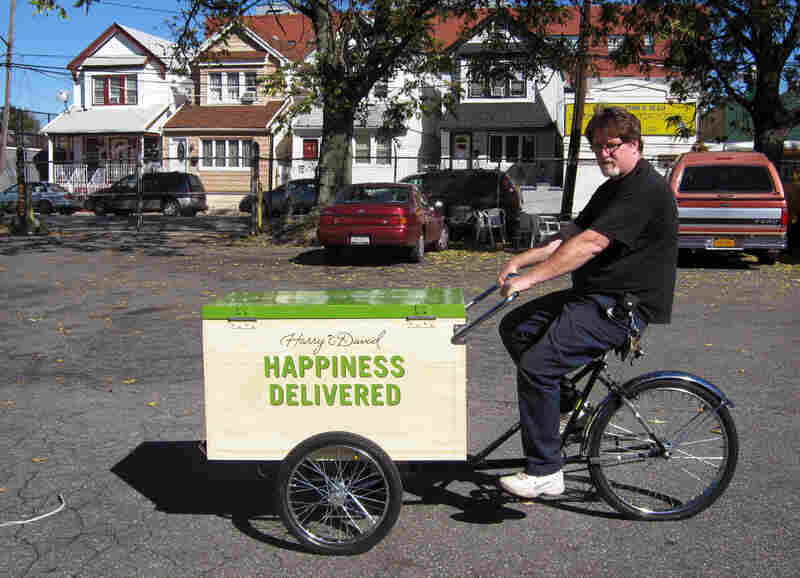 Worksman Cycles makes trikes for food vending and for general deliveries. Most of its customers are independent businesses, but some are larger national chains like gourmet food purveyor Harry and David, whose food bike is pictured above. Courtesy of Worksman Cycles hide caption 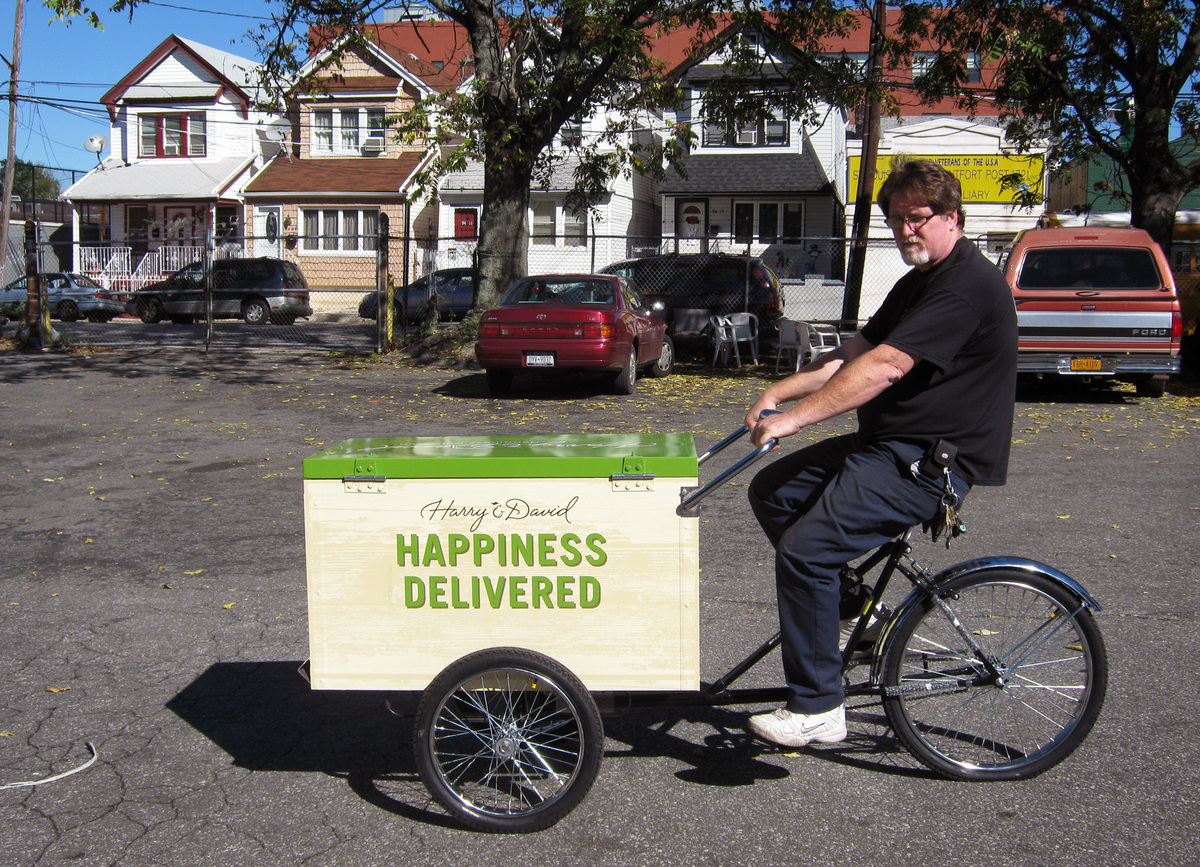 Worksman Cycles makes trikes for food vending and for general deliveries. Most of its customers are independent businesses, but some are larger national chains like gourmet food purveyor Harry and David, whose food bike is pictured above.

"It's more convenient being on a bike," says Vincent Sterne, owner of Two Rivers Cider Co. in Sacramento, Calif.

Sterne has been delivering cider kegs and bottles by bike to bars and retailers for 18 years.

"I go to all the local beer festivals on my bicycle, and I pull in and get set up and pull out again faster than anyone in a truck," says Sterne, who uses four company bicycles. One of them is actually a moving bar: a cargo bike fitted with keg mounts and tap handles that he pedals to special tasting events. "I just roll up and turn on the CO2," he says. "It's that easy."

Charlie Wicker, owner of Trailhead Coffee Roasters, uses a pair of cargo bikes for all deliveries within the 6-mile radius of urban Portland, Ore. He even has the capacity to pull over anywhere to brew and serve coffee. He says riding even a heavily loaded bicycle in a congested city is swifter and more efficient than using a vehicle.

"We're doing high volumes of retail business within the Portland area, and we use bikes because it works," Wicker says. 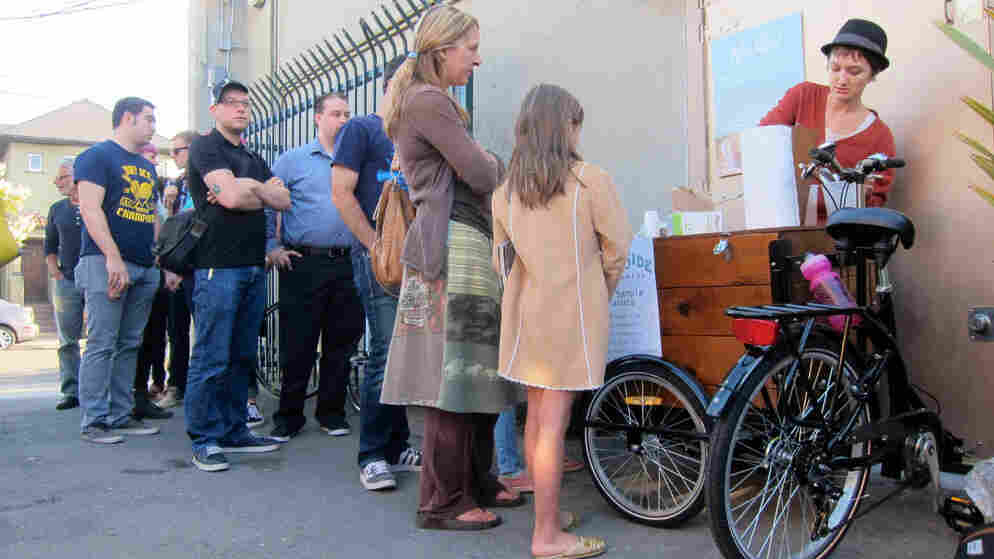 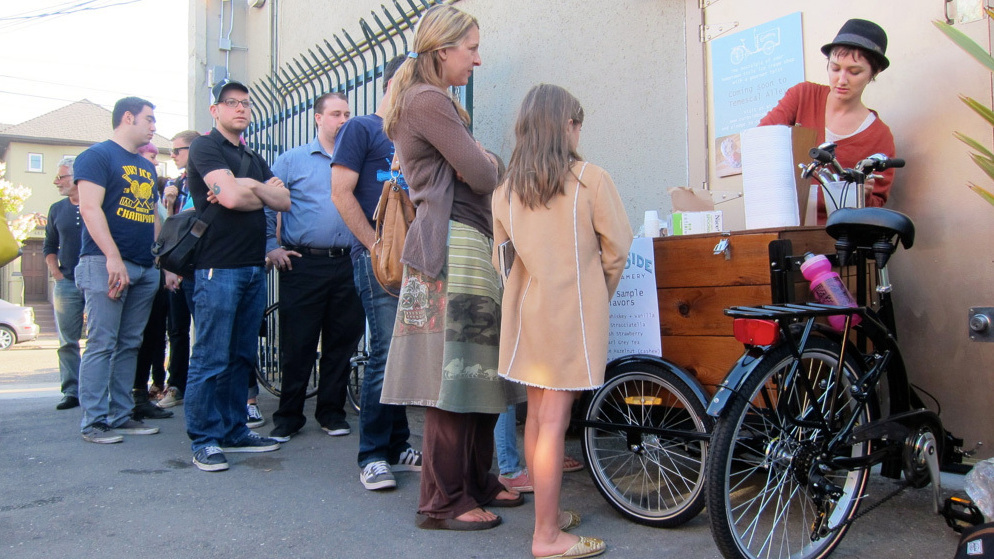 He can carry 200 pounds of coffee at a time — even uphill — and says he pedals 600 to 700 pounds weekly to Portland cafes, grocery stores and restaurants. And he says he can make his routine delivery circuit faster than competing coffee purveyors, whom he sometimes slips quietly past in downtown gridlock.

"On a bike, you're basically impervious to traffic jams," he says. "I can calculate my delivery time down to the minute."

Around the country, the fleet of food bike vendors is swelling — from the Taco Bike in Nashville to the West Sac Veggie Trike in Sacramento.

Portland-based Metrofiets Cargo Bikes is among the companies supplying the growing industry. Co-owner Phillip Ross says demand has ballooned beyond what he and partner James Nichols can keep up with.

Ross says he has shipped custom-built cargo bicycles to customers around the country and even to Europe. Most are fitted just for packing and transport. Some are also rigged for cooking, food prep and draft beverage service. At least one had an operating sink.

One of his earlier customers was Hopworks Urban Brewery, a Portland brewpub for which Metrofiets built a custom bar bike, fitted with keg mounts, tap handles, a pizza rack in the rear and solar panels to power an MP3 player at party events. 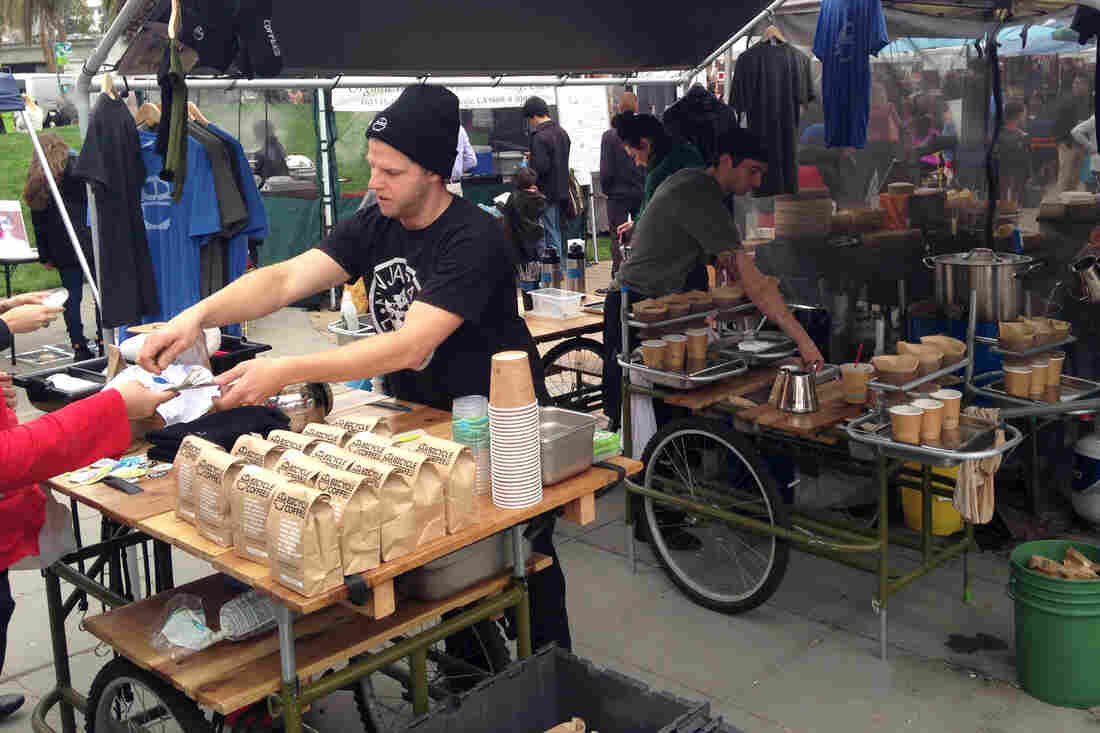 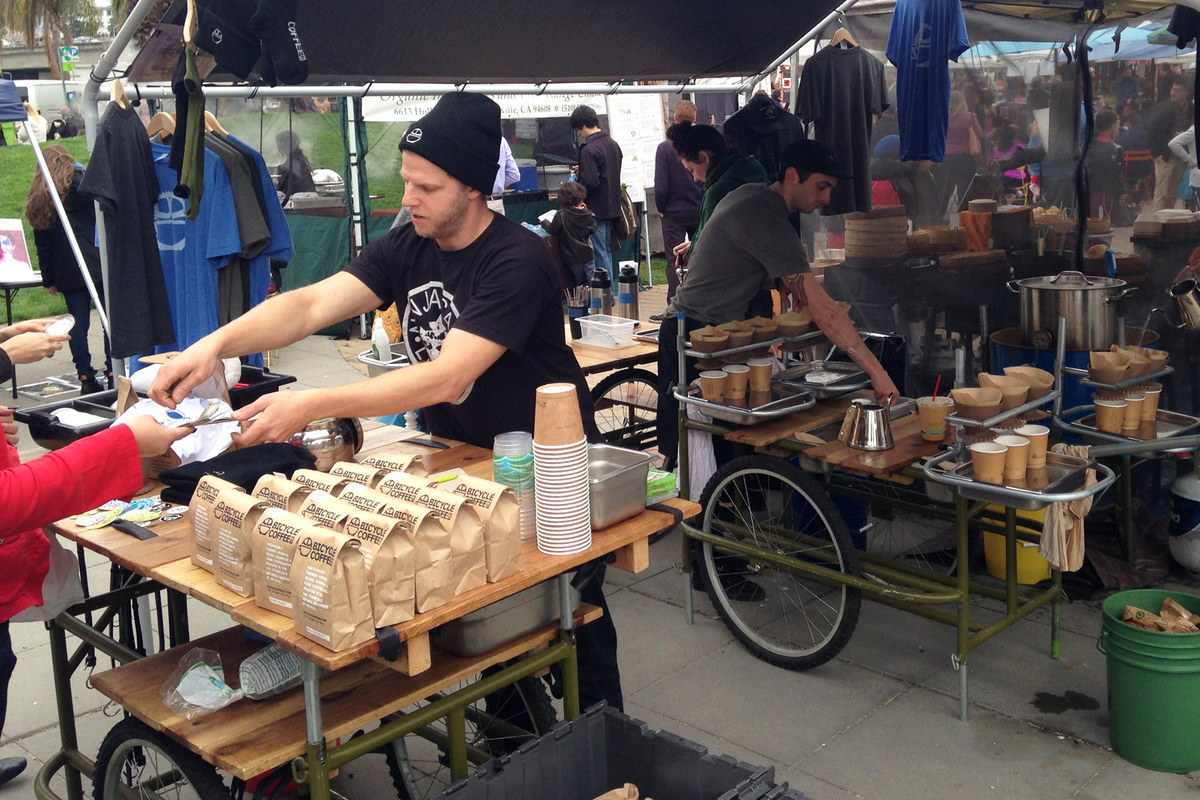 Metrofiets is a two-person outfit. Worksman Cycles, based in Queens, N.Y., is huge by comparison. The company, which has 55 employees, has been building custom bikes and trikes since 1898, says co-owner Wayne Sosin. He says firms big and small have long recognized the marketing value of a company bicycle.

"The public sees a bike or tricycle as charming, not like a truck spewing fumes," Sosin says. A bike, he says, can work like a "moving billboard."

Sosin says he has built rigs for large companies including Whole Foods, Domino's Pizza, Starbucks and Four Seasons Hotels and Resorts, which uses them as room service vehicles between buildings.

Moving through a busy street grid on a bike may be easy, but cooking on one isn't. Sometimes it isn't even legal, as dishwashing stations and refrigeration may be required onsite by state health codes.

"If I put all that extra stuff on my bike, it would become a food truck," says Alfonso Dominguez, owner of El Taco Bike. So Dominguez preps all of the tacos at his family's Oakland, Calif., restaurant, then pedals them to parties and street festivals for sale.

Berkeley resident John Romankiewicz, who will soon be serving Chinese crepes off a food bike called Jian Bing Johnny's, hopes to amend existing law for the benefit of all food bikes. What he wants is for health officials to allow food bike operators to cook and serve food without onsite refrigeration for up to four hours — the same time limit granted to stationary food purveyors. This, he says, would grant wiggle room to work with.

"I'll just pack up before the four-hour mark, and I'll bring lots of spatulas," he says, so he doesn't have to wash them.

Europe's fleet of food bikes is advancing at least as quickly as America's.

There is even a $15,000 coffee-brewing bike, made by a London company called Velopresso, that grinds roasted beans via pedal power, then brews you a cup of joe.

Clever — but Trailhead Coffee's Wicker says he isn't interested in such gimmicks.

"We aren't a circus show," he says. "This is a viable business."

Update 1/26/15: Wicker says that, for the record, he admires the mechanics of the Velopresso, but he feels that similar gadgetry wouldn't work for his bikes. For Velopresso, though, the method is not just cool but functional, he says.