Accessibility links
What's More Nutritious, Orange Juice Or An Orange? It's Complicated : The Salt A study suggests that when it comes to oranges, juice may unlock more of some beneficial nutrients for our bodies to absorb than fruit does. But don't use that as an excuse to gulp down OJ just yet. 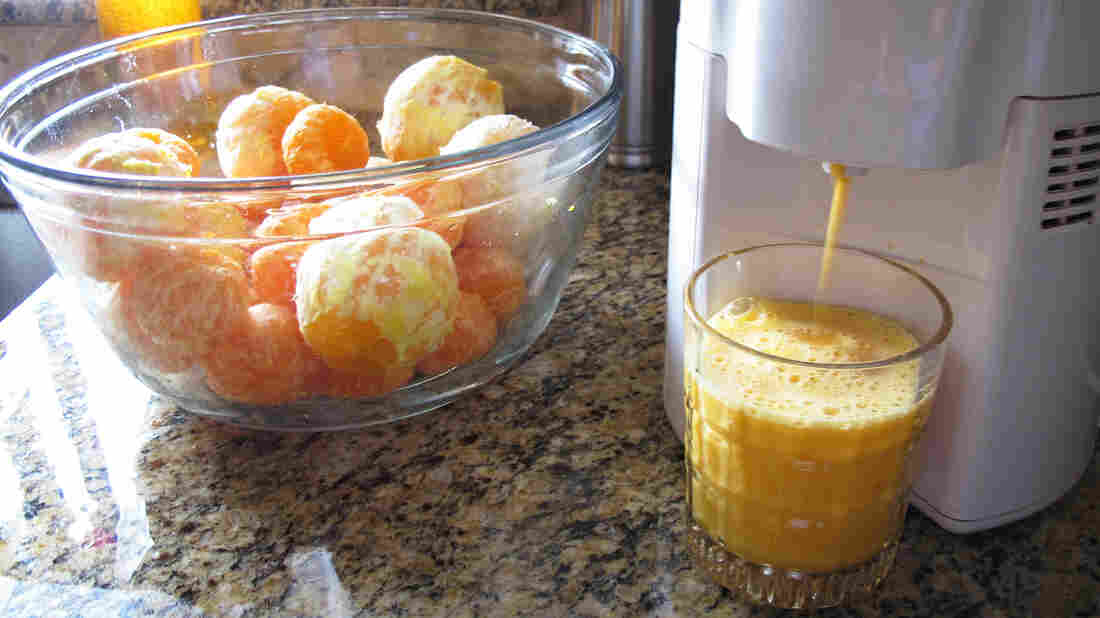 To juice or not to juice? That is the question. OakleyOriginals/Flickr hide caption 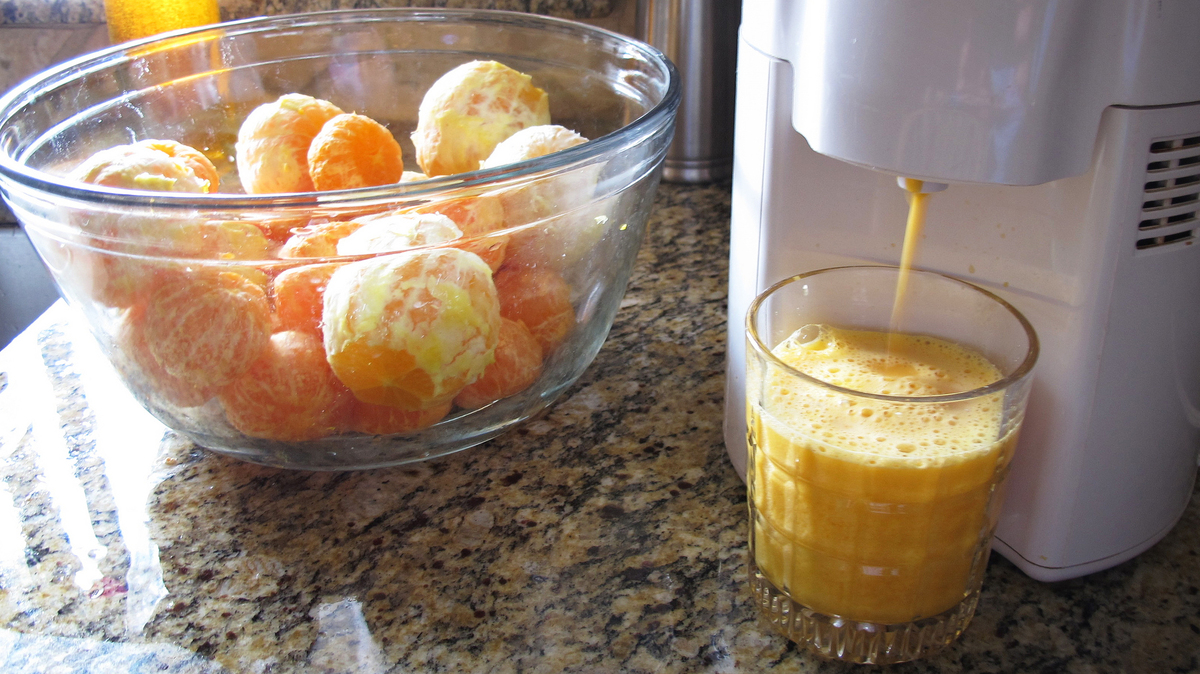 To juice or not to juice? That is the question.

We all could probably eat more fruits and vegetables. But if forced to choose between whole fruit or a glass of juice, which one seems more healthful?

The general advice is to opt for the fruit, since juices are stripped of the fiber – which most us don't get enough of — in whole fruit. And let's face it: Most juice contains a lot of sugar, which most of us consume too much of.

So our interest was piqued when we spotted a study suggesting that, when it comes to oranges, juice might actually unlock more carotenoids and flavonoids – both beneficial phytonutrients — than an equivalent amount of fruit.

To figure that out, German and Saudi researchers started with a big batch of fresh navel oranges. They analyzed the fruit in three forms: peeled segments, a mashed-up puree and as juice, both fresh-squeezed and pasteurized. They found that levels of vitamin C and carotenoids were basically the same in the juice and the unprocessed fruit, while levels of flavonoids were significantly lower.

But then the scientists threw their orange test foods into in a test tube model designed to mimic digestion, and that's when things got interesting: Much more of the carotenoids and flavonoids were released from the orange juice than from the fruit slices or mush. The differences were striking: Carotenoid release went up from nearly 11 percent in the fruit to 28 percent in the fresh juice, and up to 39.5 percent in the pasteurized juice. Meanwhile, flavonoids were boosted nearly five-fold in juice compared to fruit.

The findings, which appear in the Journal of Agricultural and Food Chemistry, are scientifically intriguing. For example, the researchers suspect heat may have something to do with the extra carotenoids released in pasteurized juice.

But that's no excuse to quit peeling oranges and gulp down a glass of OJ instead.

For starters, the study used a test tube model to mimic digestion, so it doesn't tell us anything about how well these nutrients could be absorbed in the human body, notes Jeffrey Blumberg, who directs the Antioxidant Research Laboratory at Tufts University.

That said, the new study "is in line with other studies that have found that nutrients in some fruits and vegetables are more bioavailable when the produce is chopped, mashed, juiced or prepared with oils," Blumberg notes in an email to The Salt.

Indeed, there's a whole avenue of research that is challenging our understanding of how to unleash the nutrition fixed inside fruits and veggies. For instance, as we've reported, we get more beta-carotene from tomatoes when we add a little fat like olive oil, and gently cooking carrots can coax them to release more nutrients. And while cooking broccoli for too long can destroy its antioxidants, chopping it is ideal.

But fruit juice is a different story — especially if you're buying a typical jug at the store, instead of making it yourself (like they did in the study).

What's more, store-bought fruit juice has, on average, only a bit less concentrated fructose than sodas. Some researchers believe that fructose is a riskier form of sugar than glucose because it increases the risk of diabetes, cardiovascular disease and liver disease. And the liquid sugar in juice, White says, leaves your stomach a lot more quickly than a whole orange does, so "juice is less filling."

There's also a question of calories: An 8-ounce glass of juice has roughly the same amount of energy as two oranges.

But "the calories you drink somehow don't register," says Maret Traber, a professor and researcher at the Linus Pauling Institute at Oregon State University.

We tend to gulp juice down mindlessly, she says. By contrast, "if you eat an orange, you spend the time peeling it, you get the orange smell on your hands. There's that whole experience of eating an orange. If you have the same amount of juice — that little half-cup — you suck it down, and you didn't even notice you ate it."

That said, if you are drinking OJ, choose the kind with pulp, Traber says. That way at least you're getting some fiber.