Accessibility links
Brewers Gone Wild: Taming Unpredictable Yeast For Flavorful Beer : The Salt A handful U.S. craft brewers are reviving an age-old way of making beer that was practically unthinkable a decade ago. Welcome to the wacky world of Brett, a local yeast that can impart funky flavors. 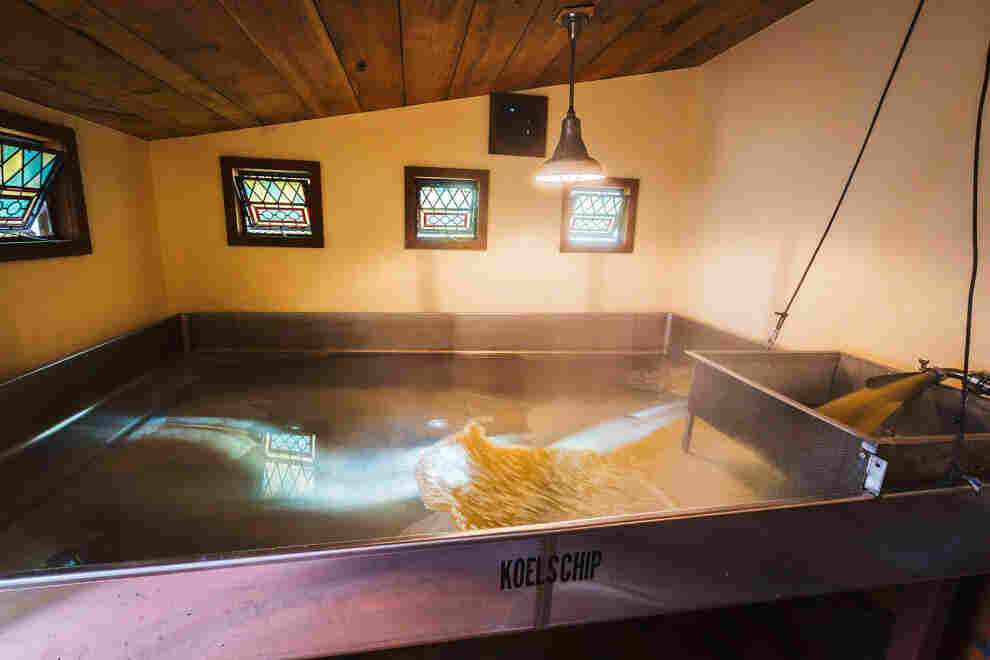 This is Allagash's coolship — an open, spontaneous fermentation tank with wort rushing in. When the Maine breeze passes over the liquid, wild yeast in the air around the brewery will begin to ferment the wort to make beer. Courtesy of Allagash hide caption 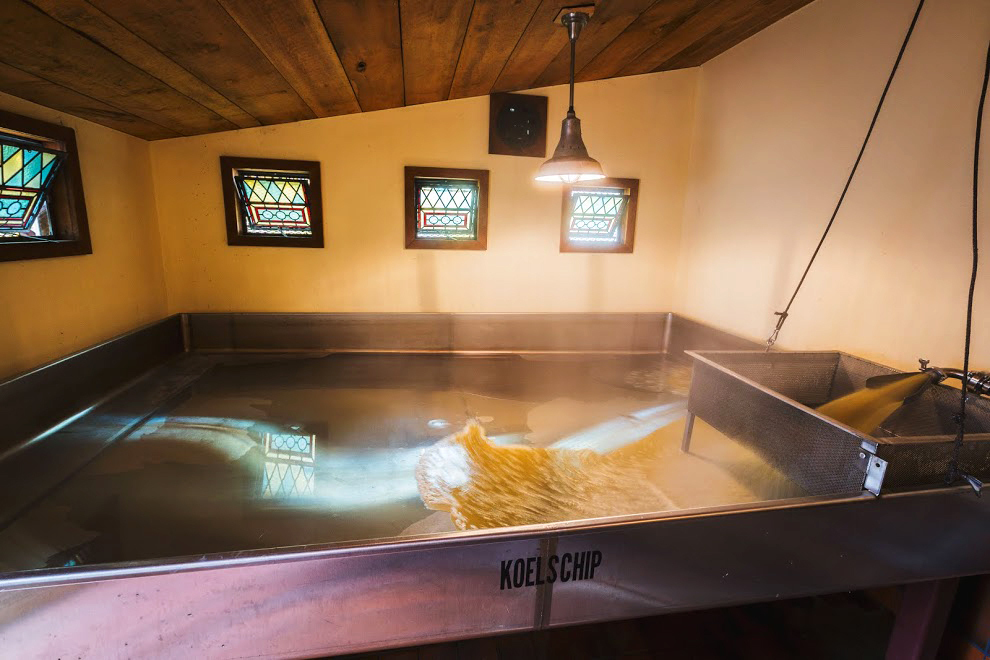 This is Allagash's coolship — an open, spontaneous fermentation tank with wort rushing in. When the Maine breeze passes over the liquid, wild yeast in the air around the brewery will begin to ferment the wort to make beer.

Crack the vast menu at any self-respecting beer bar, and you're bound to run into a scientific name among the descriptions: Brettanomyces, affectionately known as Brett.

I've heard American brewers and beer geeks utter "Brett" in hushed, reverent tones before swooshing aromatic liquids made with it across their tongues. But this mysterious, mythic and increasingly popular strain of wild yeast also strikes fear in the hearts of brewers and microbiologists in the industry. 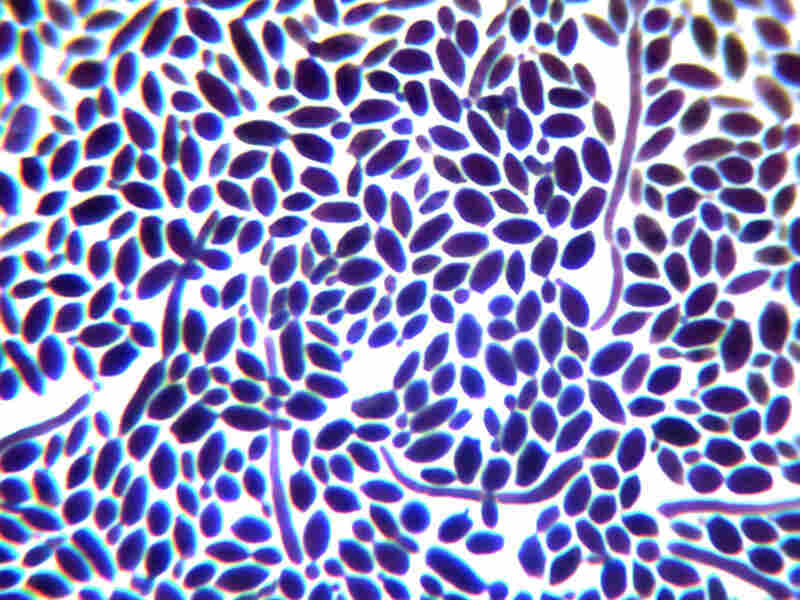 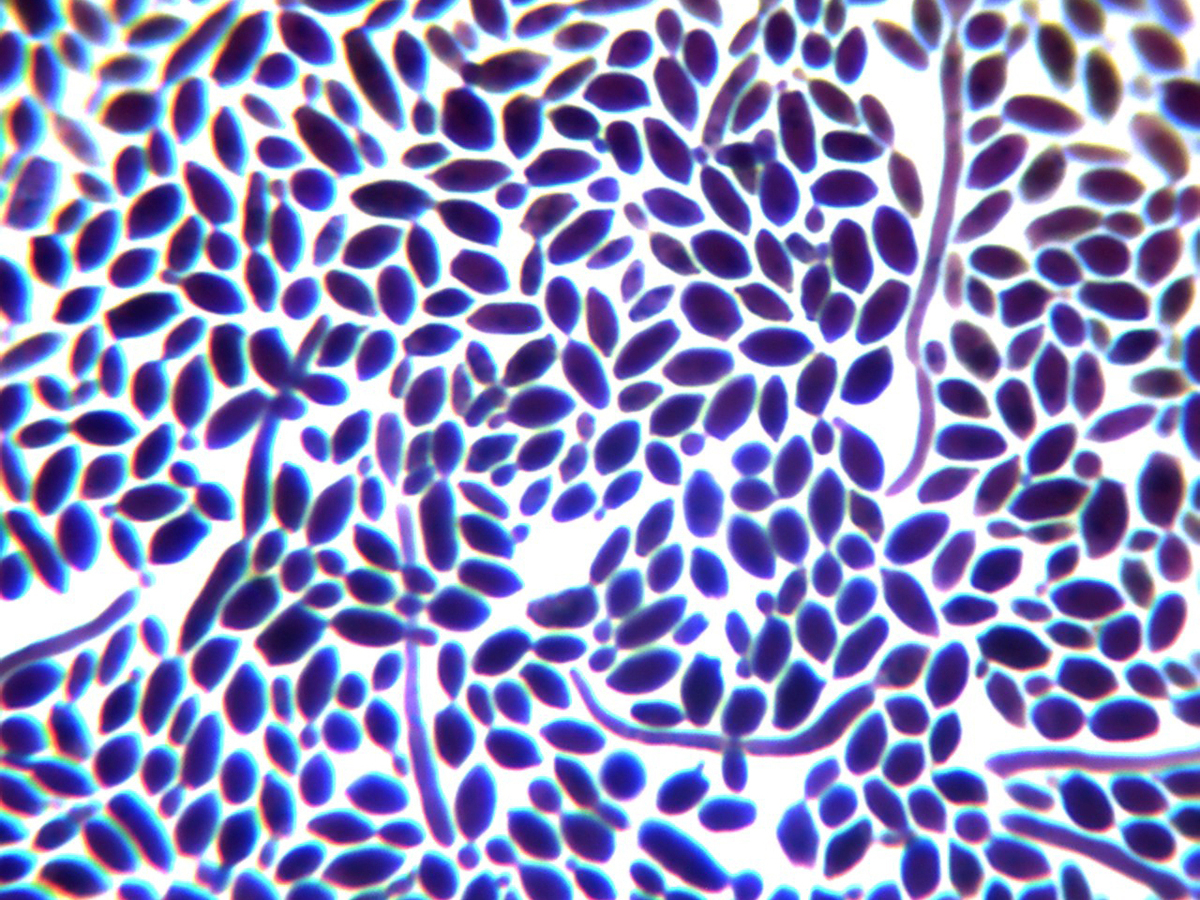 Allagash Brewing microbiologist and head of quality control Zach Bodah's favorite microscope picture of Brettanomyces (taken in house). The culture comes from Confluence Ale and is a blend of the Allagash house yeast and Brett yeast.

First, let's review. Beer at its most basic is made up of four ingredients: water, barley malt, hops and yeast. Each one contributes to the overall taste and character, and they fuel the brewer's creative palette.

But yeast is the only still-living, organic organism in the classic lineup, and it wields a lot of power. Since medieval days, many brewers have relied on wild yeast that floats in and ferments the wort. Over time, brewers and microbiologists have captured, isolated and cultured many wild strains.

Today many breweries go to extreme lengths to nurture carefully controlled house strains of yeast purchased from a commercial lab. The most common is Saccharomyces, and brewers spend their days sanitizing every hose, clamp and piece of equipment to keep their processes lab-pure.

But sometimes Brett, which is all around us, infects a beer designed for Saccharomyces. A much dreaded result can be undesirable off-flavors that ruin an entire batch of beer.

"Every brewery in the world sees [wild yeasts] as beer spoilers," Jason Perkins, head brewer at the Allagash Brewing Co. in Portland, Maine, told me on a recent visit. Quality-control manager Zach Bodah concurred: "A big part of our job with most of the beers we make is to limit these microbes."

So why are today's craftspeople wrangling, replicating and even inviting wild Brett to run seemingly unbridled through their brew houses?

The team at Allagash has been experimenting with Brett and other "nontraditional brewing microbes" (for making wild and sour beers) for about a dozen years. The first time the brewers discovered that an ambient strain of local, wild Brett had contaminated a barrel of beer, "we panicked!" Perkins recalls. "We learned quickly that the character was very unique." So they isolated it, cultured it and created a small but ambitious wild beer program that puts Brett on center stage. 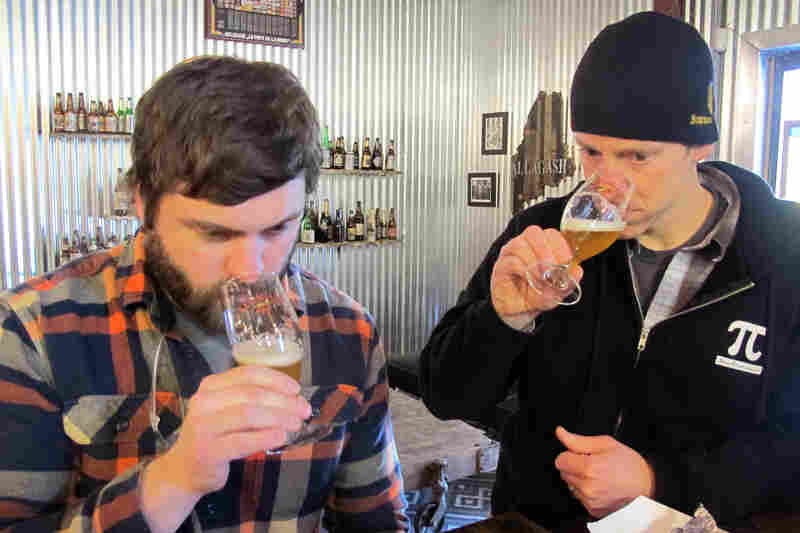 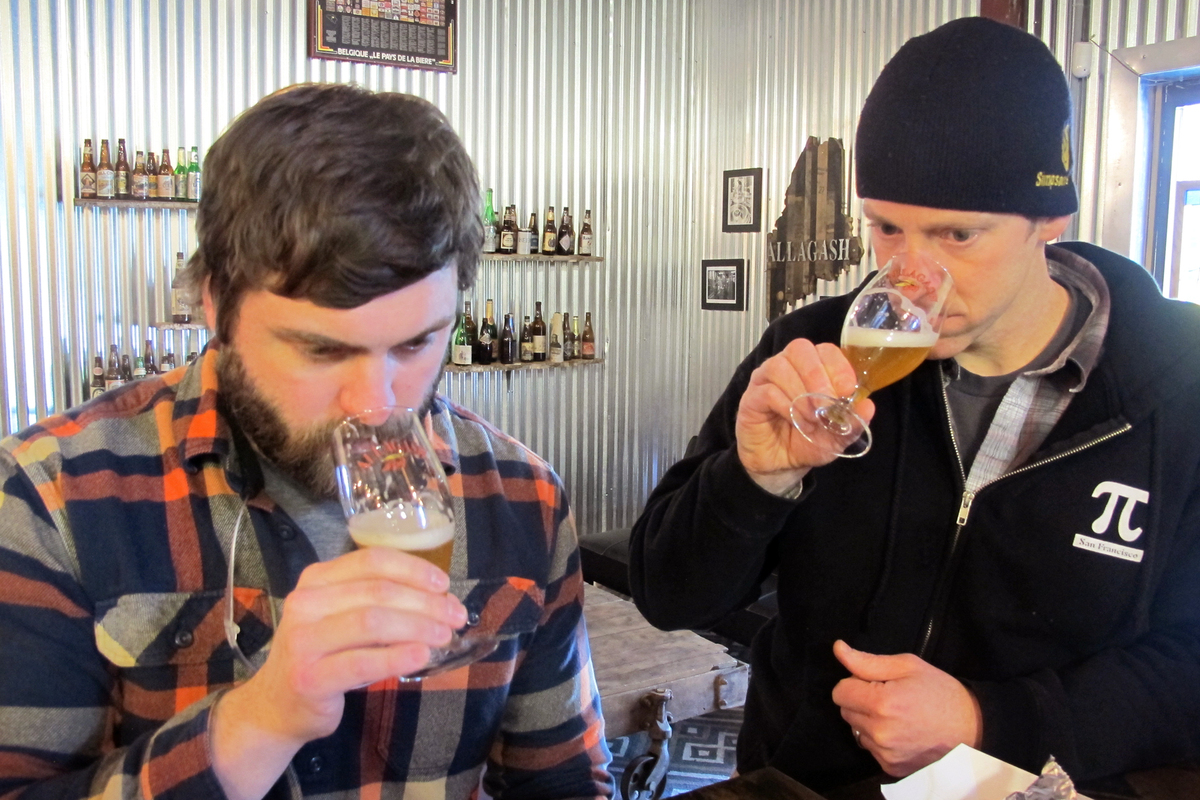 Allagash microbiologist Zach Bodah (left) and Jason Perkins, head brewer (right), assess the aroma of a beer made with the local Brettanomyces strain.

"Our house Brett's character is very definitive," says Bodah, who trained as a microbiologist.

"There's a lot going on. Upfront it tastes like Juicy Fruit," Perkins says after taking a sip.

"I get a little graham cracker thing going on," Bodah adds.

Allagash ferments and ages its wild beers for one to three years in wood casks sequestered inside a building separate from the main brew house. Still, roughly 10 percent of Allagash's wild beer gets dumped because it's undrinkable — Brett can do unpredictable things, and sometimes it doesn't ferment or interact with the other ingredients the way the brewers hope.

Still, the Allagash staff can't get enough of it and is even taking its risky love affair with Brettanomyces up a notch by using a spontaneous, open fermentation vessel called a coolship. The goal is to create groundbreaking flavor profiles and characteristics inspired by the coolship used in Belgium's Lambic region, where farmhouse brewers open windows and allow ambient yeast to ride in on the wind and get to work. Lambics made by breweries such as Cantillon near Brussels are famed for their tart, multilayered tastes born out of this medieval approach to brewing. Now Allagash is doing it — going true wild — in Maine.

"Allagash's coolship process is about as traditional as it gets," Brett expert Chad Yakobson says, "and the most romantic." Yakobson owns and is the brewer at the four-year-old Crooked Stave Artisan Beer Project Brewery in Denver and says only a few other U.S. breweries use coolships because they're expensive and risky. (Yakobson has one but hasn't taken it for a test run yet.) 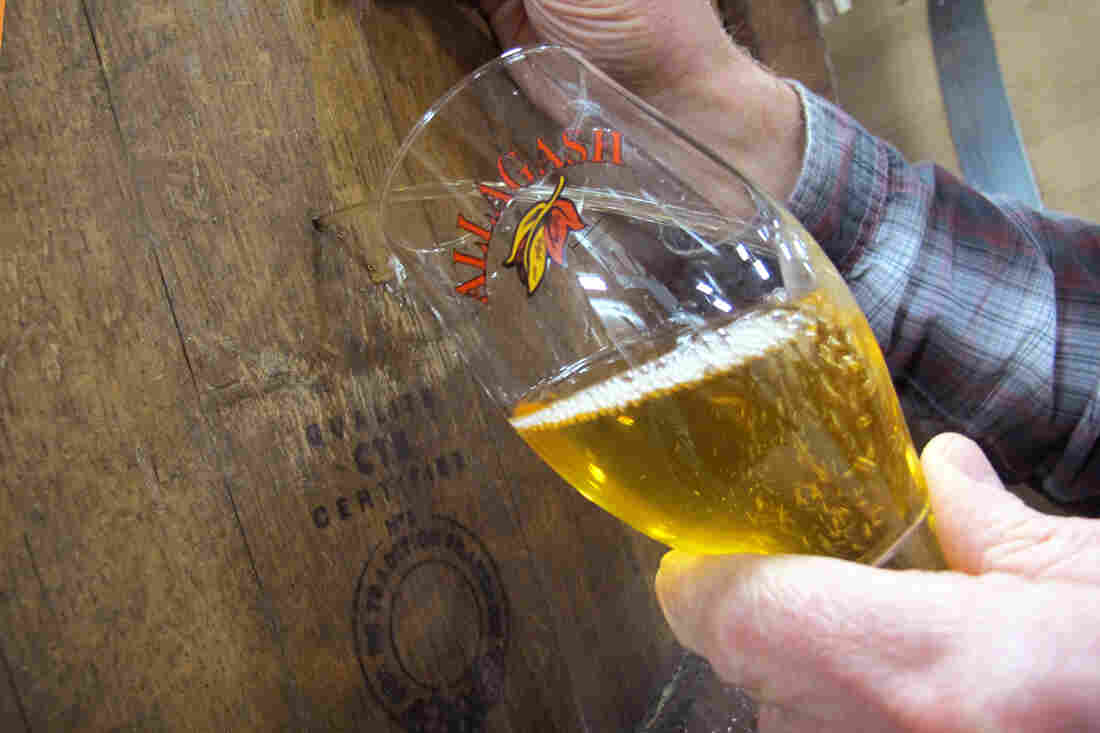 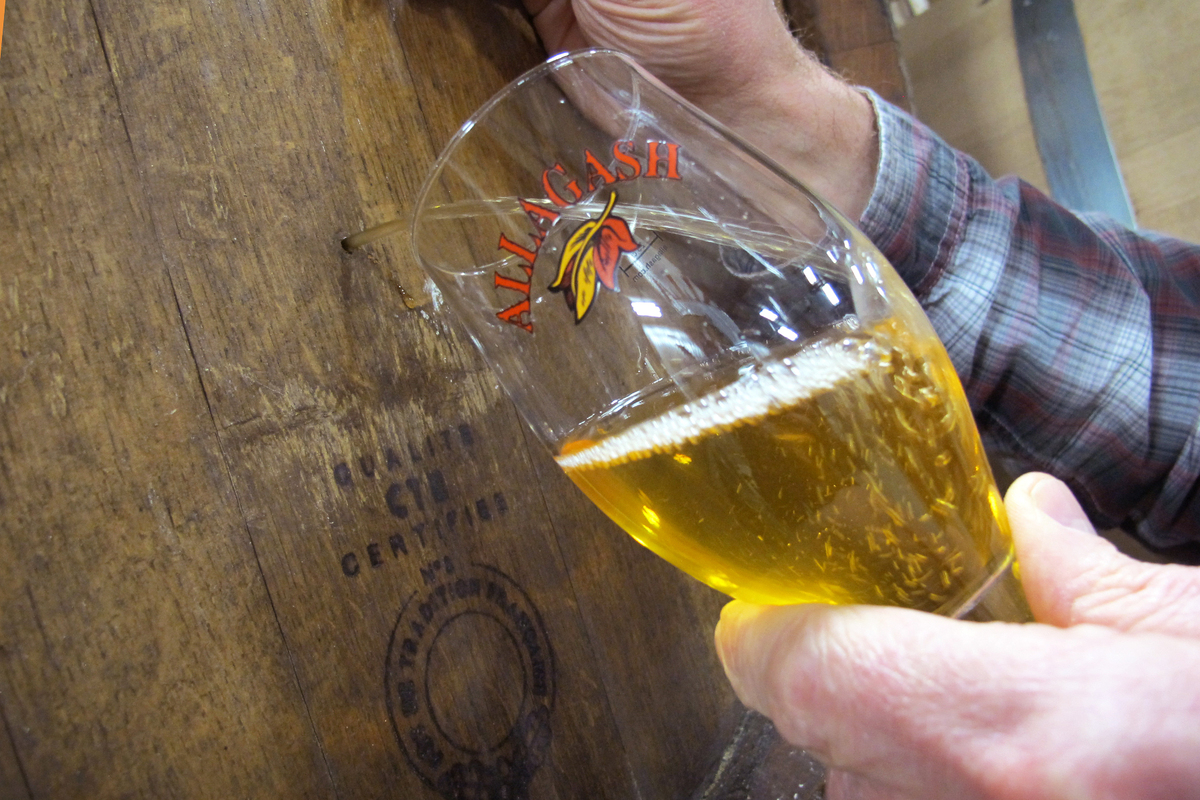 Yakobson fell under Brett's spell when he was getting his brewing degree at Heriot-Watt University in Edinburgh, Scotland. "There were some brewers in the U.K. and Belgium using it to make beautiful beers," he says. His research showed there were many variations, "which means more potential for unique flavors." Now every beer Yakobson brews at Crooked Stave is made with Brett he cultivates himself.

Then there's the Mystic Brewery in Chelsea, Mass., where the motto is, "We're not scared of no stinkin' microbes." It's one of only a few facilities in the country that do both wild yeast and non-wild yeast beers in the same space, according to microbiologist Bryan Greenhagen.

In fact, Greenhagen's got one he's calling "Pitch All the Bretts." It contains about 12 strains of Brettanomyces.

He also travels around "capturing" indigenous yeast from different locales ("like Indiana Jones," he says) for his Vinland Native Yeast Project. Each year he goes out and picks wild fruit (that has yeast on the skin), then throws it into the fermentation vessel.

"That's how the Trappists did it," he says of the Belgian order of brewing monks. "It's sort of like saying, 'Here's a place. What's an example of a yeast that's living here?' San Francisco has its own yeast culture that changes its sourdough bread. Everyplace does. We're just doing it with beer."

Greenhagen's Vinland 2 was the first beer made with American yeast, wild or domesticated, to win a gold medal at the Great American Beer Festival.

As for wild yeast's rise in popularity among brewers and consumers, Greenhagen says it still exists on the fringes. "Will wild beers be the next Super Bowl libation? Probably not."

Brett fans acknowledge that while Americans' palates are becoming more adventurous and sophisticated, plenty of people wrinkle their noses, pucker their lips and even send their orders back when they first taste a wild or sour beer made with Brett. It's not for everyone.

"If someone throws one in front of you for the first time without explanation, it could be a shock," Perkins of Allagash agreed, adding, "But once you discover them — when they're done right — they're great with food."