Accessibility links
Tossing Out Food In The Trash? In Seattle, You'll Be Fined For That : The Salt Seattle is the first city in the nation to fine people for not properly sorting their garbage. The law took effect on Jan. 1 as a bid to keep food out of landfills and encourage composting instead. 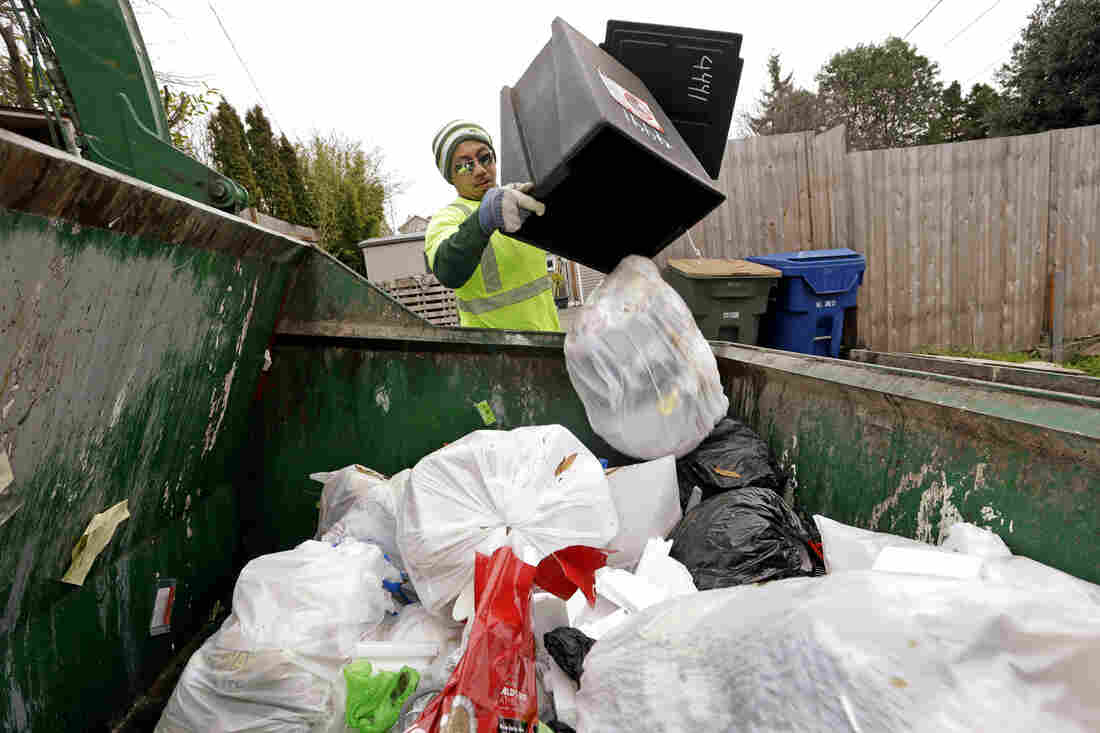 Seattle garbage collector Anousone Sadettanh empties a small residential garbage bin into his truck in 2014. It is now illegal to toss out food with the trash in the city. Residents will get warning tags for now; the city will start imposing fines in July. Elaine Thompson/AP hide caption 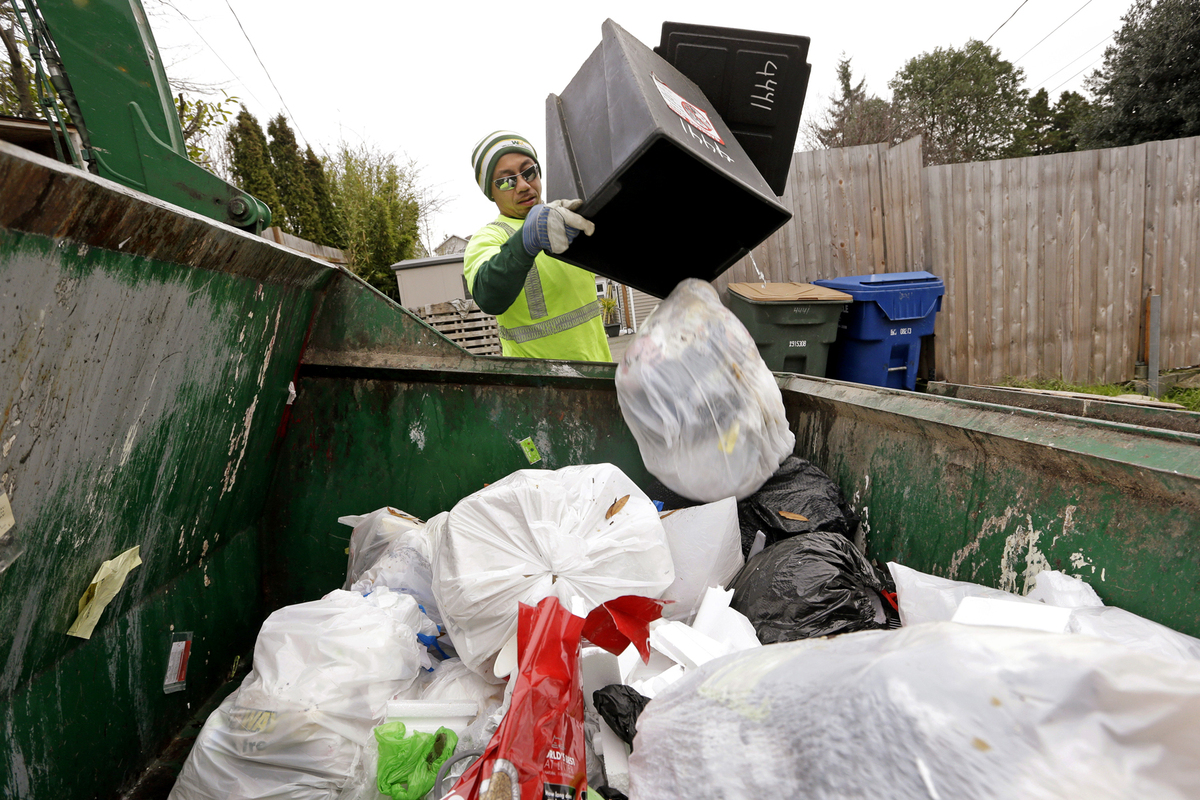 Seattle garbage collector Anousone Sadettanh empties a small residential garbage bin into his truck in 2014. It is now illegal to toss out food with the trash in the city. Residents will get warning tags for now; the city will start imposing fines in July.

In Seattle, wasting food will now earn you a scarlet letter — well, a scarlet tag, to be more accurate.

The bright red tag, posted on a garbage bin, tells everyone who sees it that you've violated a new city law that makes it illegal to put food into trash cans.

"I'm sure neighbors are going to see these on their other neighbors' cans," says Rodney Watkins, a lead driver for Recology CleanScapes, a waste contractor for the city. He's on the front lines of enforcing these rules.

Seattle is the first city in the nation to fine homeowners for not properly sorting their garbage. The law took effect on Jan. 1 as a bid to keep food out of landfills. Other cities like San Francisco and Vancouver mandate composting, but don't penalize homeowners directly. 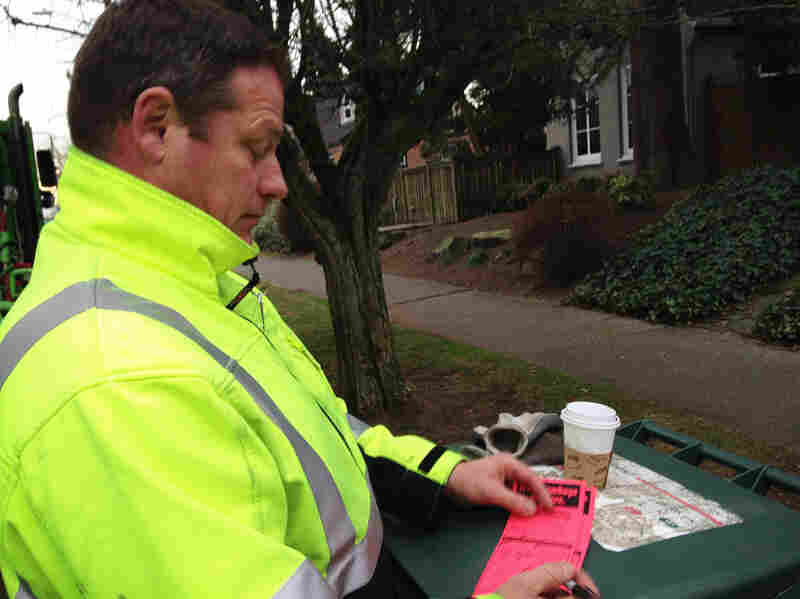 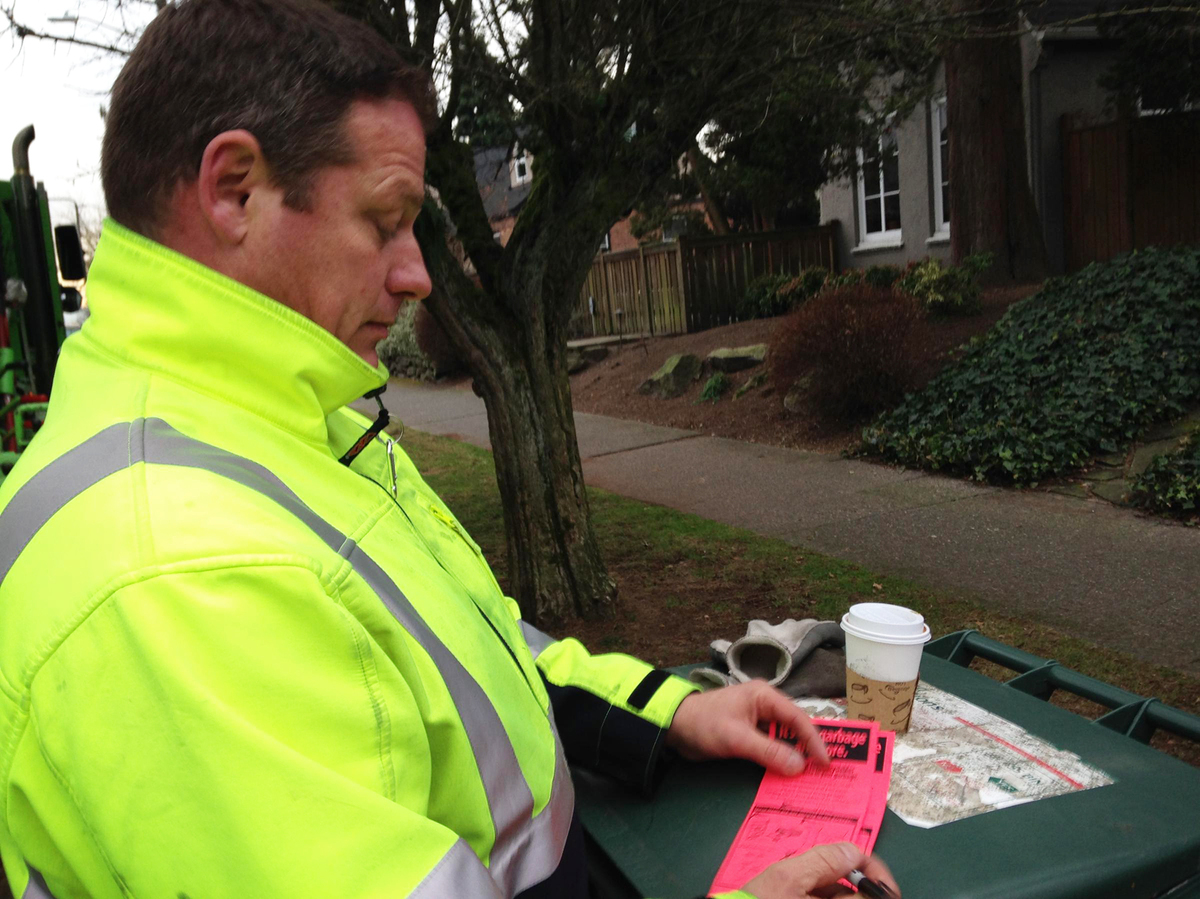 As Watkins made the rounds in Maple Leaf, a residential neighborhood of Seattle, earlier this month, he appeared disheartened to find an entire red velvet cake in someone's trash bin. Any household with more than 10 percent food in its garbage earns a bright red tag notifying it of the infraction.

"Right now, I'm tagging probably every fifth can," Watkins says. "I don't know if that's just the holidays, or the fact that I'm actually paying a lot more attention."

Watkins doesn't have to comb through the trash — the forbidden items are plain to see.

"You can see all the oranges and coffee grounds," he says, raising one lid. "All that makes great compost. You can put that in your compost bin and buy it back next year in a bag and put it in your garden."

Seattle Public Utilities estimates that every family in the city throws away some 400 pounds of food each year. The city gives households bins to fill with their food and yard waste. But residents don't have to compost it themselves: They can just leave the bins curbside and have the city pick it up for a fee.

The new law is meant to help Seattle increase its recycling and composting rate to 60 percent of all its waste — the city is currently 4 percentage points below that.

The red tags are part of the public education campaign about the new law; the city won't actually start issuing fines until July. Single households will pay $1 per violation, but apartments, condos and commercial buildings could be fined $50. That has apartment and condominium dwellers a little nervous.

Jim Ward owns a condo in a large building in the Laurelhurst neighborhood. He says his neighbors include people from many different countries who may not be familiar with Seattle's recycling rules. Ward came down to the building's recycling bin recently and it was a mess.

"I found dirty rags with oil on them and just really messy pieces of plastic that were wet," he says. So Ward took the opportunity to do some outreach.

"I ended up actually taking those things and putting them on the main counter in the lobby of the condominium, and I just wrote a note to everyone and I said, 'Are these things recyclable?' "

Seattle's push for more recycling comes as the state's overall recycling rate has gone down slightly. The Washington Department of Ecology says the recycling rate slipped to 49 percent in 2013 from 50, although that's still among the highest in the nation.

The city's consumer recycling capabilities are pretty high-tech, with machines to separate paper, glass and plastic. And come July, Seattle will also start issuing fines for too much recyclable materials mixed in the trash. That has been illegal for several years, but haulers had just been leaving garbage on the curb when that happened.

Now, leaving an empty tub of butter or mayonnaise jar in the rubbish bin could earn you a red tag, too.

Amy Radil is a reporter with member station KUOW in Seattle. A version of this story first appeared on the KUOW website.