Accessibility links
Blending Vs. Juicing? How To Get The Most Nutrition From Your Fruit : The Salt Juice and smoothies can be a convenient way to get more servings of fruits and vegetables. So what's the better gadget between a blender and juicer if you want to get more beneficial nutrients? 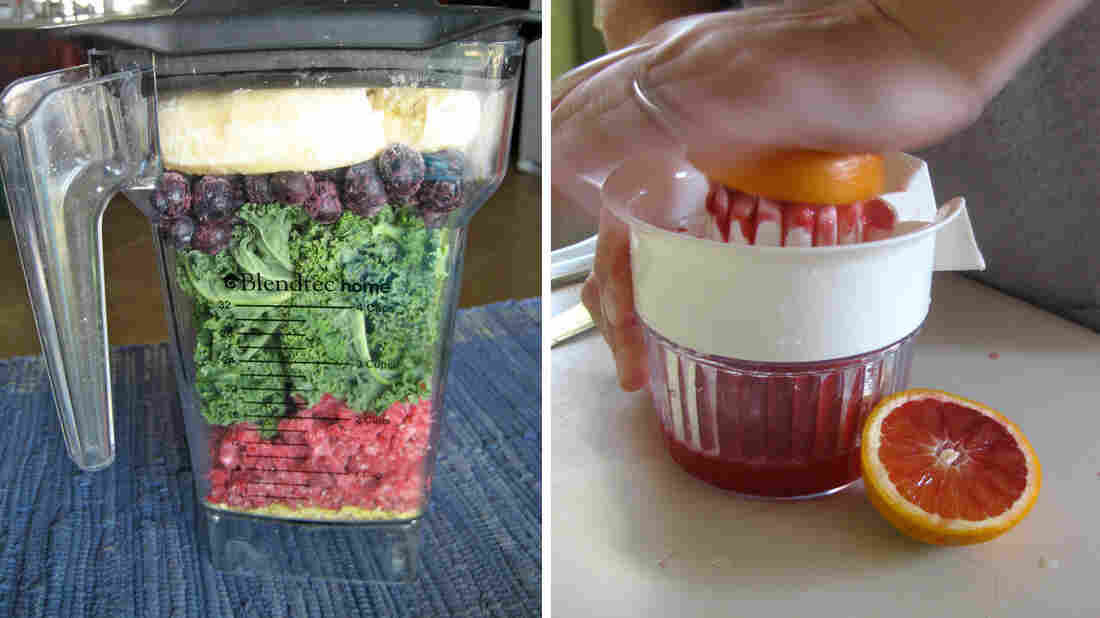 To get the most nutritional bang for your buck, scientists say blending may beat juicing. Aimee Ray/Flickr; Liz/Flickr hide caption 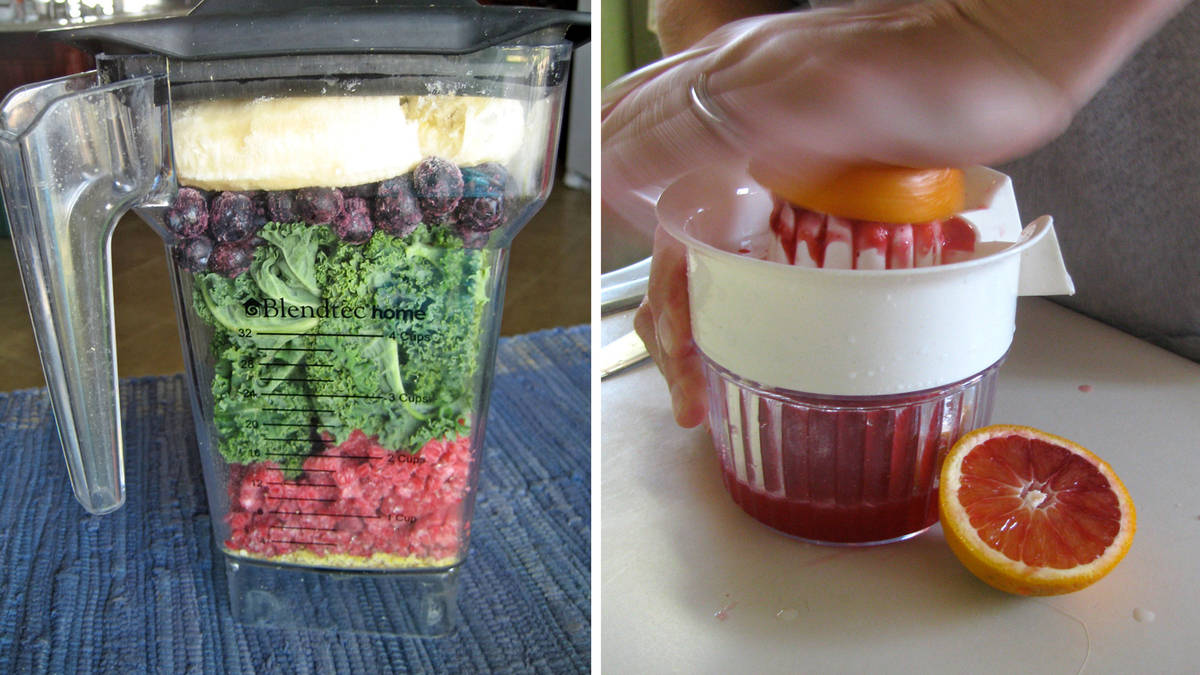 To get the most nutritional bang for your buck, scientists say blending may beat juicing.

At a time when Americans consume, on average, only about one serving of fruit and one serving of vegetables a day when we're supposed to consume five to 13 servings, the appeal of juice and smoothies is pretty obvious.

Juice can be a convenient way to get more servings of fruit and veggies. And, hey, making your own juice concoctions at home can be fun.

So, here's the question: What's the better gadget, a juicer or a blender? Does one do a better job of boosting the nutrients in the fruit (and veggies)?

We dug up a study from 2012 in which food scientists at Texas A&M University evaluated both techniques.

Cooking (Or Not Cooking) Broccoli To Protect Its Nutritional Riches

What they found is the blended juice had significantly higher levels of beneficial phytonutrients compared to the juice made with a juicer (the electric juicer and hand juicer had about the same levels).

In particular, the blended juice had about a seven-fold higher content of a compound called naringin.

Naringin is a flavonoid that has been shown to have cancer-fighting properties as well as strong anti-inflammatory and antioxidant activities that may be beneficial for the treatment of diabetes and other metabolic disorder.

None of this is to say that blending your grapefruit will have a measurable impact on your health.

But, if you're looking to boost nutrients, this study does show that how you process juice can have a big impact on the levels of flavonoids.

The authors of the paper tell The Salt they did not expect such a significant difference.

"Yes, I was indeed surprised and so was everyone in the lab," Rammohan Uckoo, a researcher at the Vegetable and Fruit Improvement Center at Texas A&M, tells us by email.

So, what explains the difference? "The blended juice had the highest pulp content, which corresponds to the maximum levels of naringin," Uckoo says.

In addition, the blended juice contained more of the fruit's segment membranes — those white layers of papery fiber that line the outside of each segments — which have higher concentrations of flavonoids.

It's long been known that how we process or cook our foods can influence nutrient levels. For instance, just last week we reported on a study that suggested orange juice might unlock more beneficial phytonutrients, compared to an equivalent amount of fruit.

And when it comes to absorbing nutrients, we're sometimes better off cooking and adding a little fat. As we've noted, to get the most of fat-soluble carotenoids found in carrots and tomatoes, adding a little olive olive can help our body absorb the beneficial antioxidants.

The bottom line, according to nutrition researchers, is that a diverse diet that includes a broad range of vegetables and fruits — both juice and whole fruits — is likely the best strategy for health. "It's really about your dietary pattern," says Jeffrey Blumberg, a nutrition scientist at the Antioxidant Research Laboratory at Tufts University who has long studied these issues.