Accessibility links
The Real Super Sunday Battle Is In The Snack Bowl : The Salt The competition over what Americans consume during the Super Bowl has gotten vicious. The nation's top merchants of virtuous and not-so-virtuous munching both want control of the line of scrimmage.

The Real Super Sunday Battle Is In The Snack Bowl

The Real Super Sunday Battle Is In The Snack Bowl 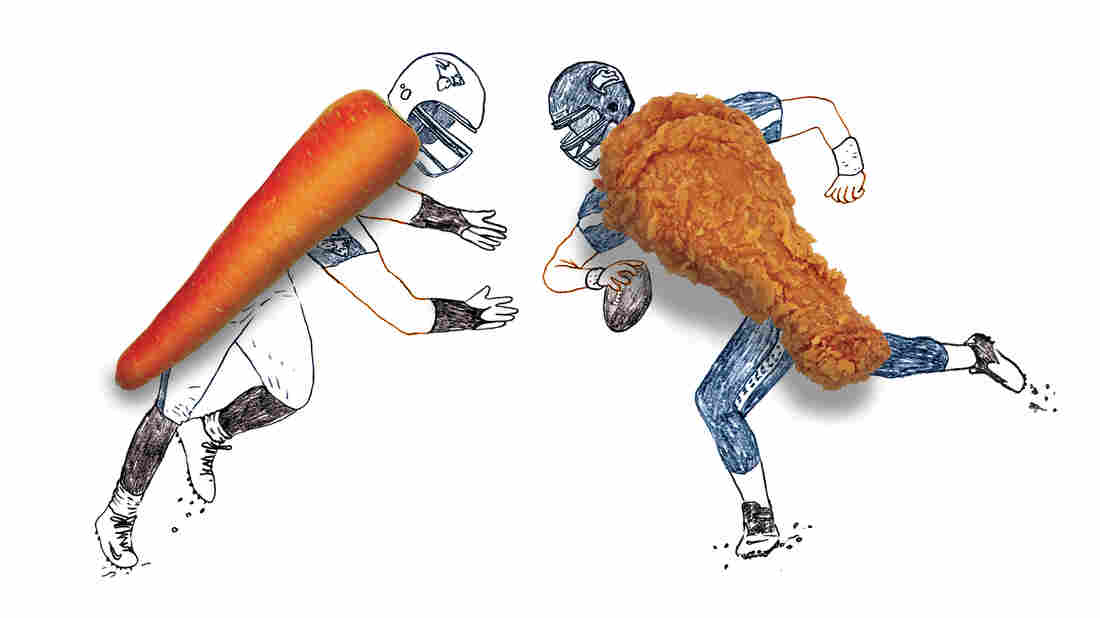 The defending champion and favorite remains the chicken wing. But underdog snacks like the carrot are trying to elbow their way into the competition. Leif Parsons for NPR; Source: whologwhy/Flickr hide caption 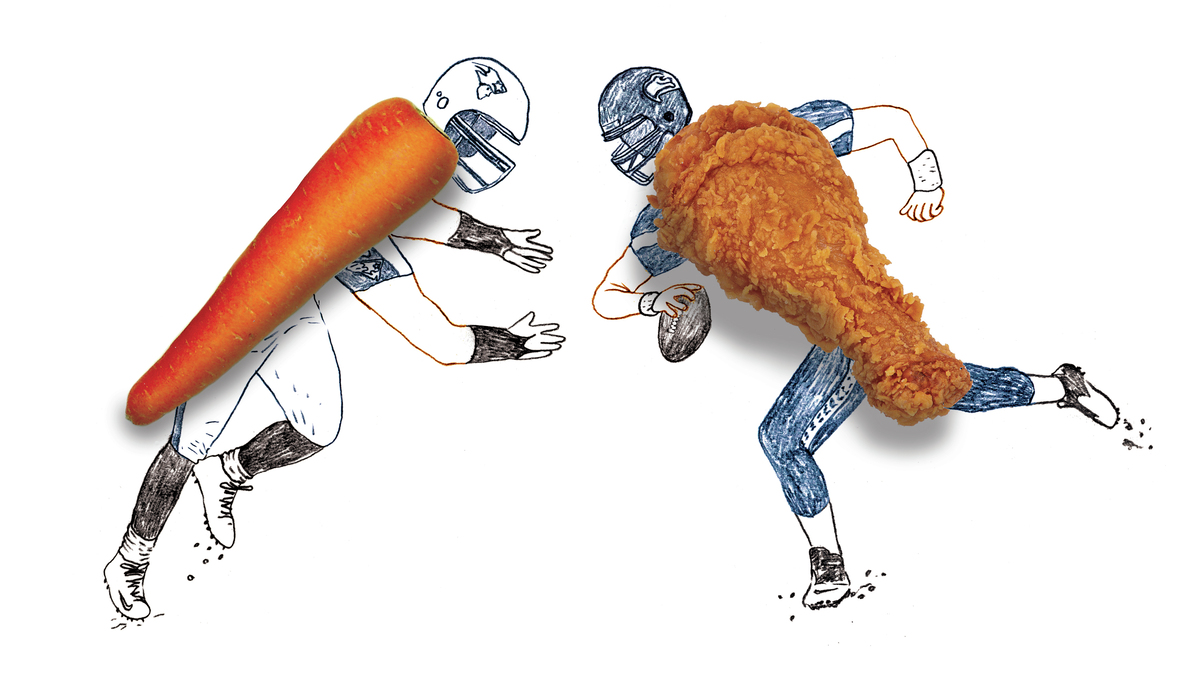 The defending champion and favorite remains the chicken wing. But underdog snacks like the carrot are trying to elbow their way into the competition.

Here at The Salt, we have been overwhelmed with emails brimming with factoids and completely unsubstantiated assertions about the food that Americans will consume on Sunday as they watch gigantic athletes burn through calories at University of Phoenix Stadium in Glendale, Ariz.

In fact, this has become a vicious competition of its own — a Snack Bowl, you might say — with the nation's top merchants of munching (virtuous and less so) fighting for control of the chow line of scrimmage. We suspect, in fact, that most people at Super Bowl parties will find this contest much more compelling and immediate than the one on the field.

The defending champion and prohibitive favorite remains (drum roll, please) the chicken wing. The National Chicken Council tells us that Americans will consume 1.25 billion of these bony appendages this weekend — dramatically more than on every other day of the year. The Council's mock-serious Wing Report, released annually on this occasion, contains many more crucial facts that underline its Snack Bowl domination. For instance, 1.25 billion wings weigh 5,955 times more than the combined weight of the Seahawks and Patriots players.

Chicken wings do face traditional rivals. This Sunday is also - allegedly - the biggest day of the year for pizza and tortilla chip consumption. According to an organization called the Calorie Control Council, it all adds up to a hefty 2,400 calories.

Hang on, though, because a few underdog snacks are trying to elbow their way into the competition. And their cheerleaders at the Center for Science in the Public Interest are talking trash.

"There's no rule that your Super Bowl party has to feature boring sporting-event staples like chicken wings, pizza, chips, and soda," snarls a press release from CSPI. The organization's "food detectives" are recommending this lineup: veggies and hummus, roasted chickpeas, chipotle chicken lettuce wraps (instead of those arrogant wings), cannellini beans and chorizo, and clementines.

For all their bravado, though, the upstarts at CSPI do seem to have a realistic sense of their chances in the Snack Bowl. Michael Jacobson, CSPI's executive director, is calling on Super Bowl party hosts merely to fill "at least half" of their snack tables with food "on the healthier side of the spectrum."

It appears, in fact, that the healthy-snack team has some locker-room troubles. One anti-GMO campaign decided to use this occasion to condemn a snack food company, but not one that's selling wings or pizza. Their target is Sabra, a hummus maker owned by PepsiCo, which uses soybean oil (obtained from genetically modified soybeans) in its hummus. The campaign, GMO Inside, promises to "mobilize public pressure on Sabra" and PepsiCo to get them to renounce GMOs.

But here's the truly shocking fact in this press release: Sabra is the "official dips sponsor of the NFL." It's true. Professional football is sponsored by a kind of hummus. Maybe there's a Snack Bowl upset coming after all.