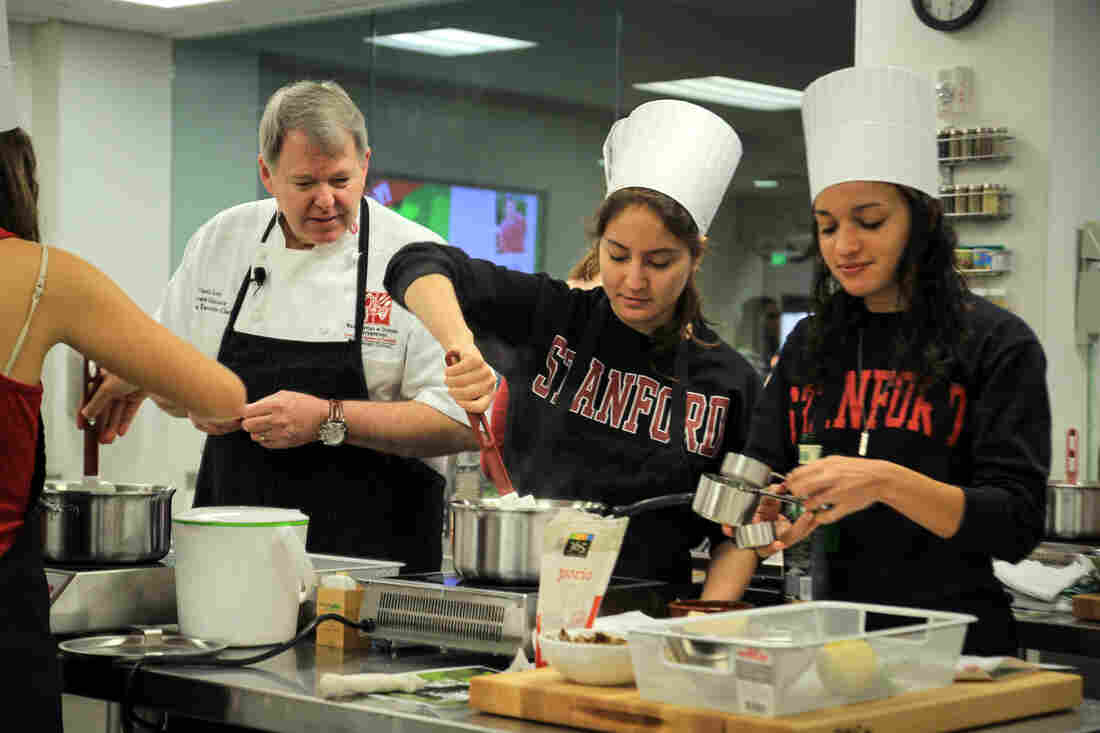 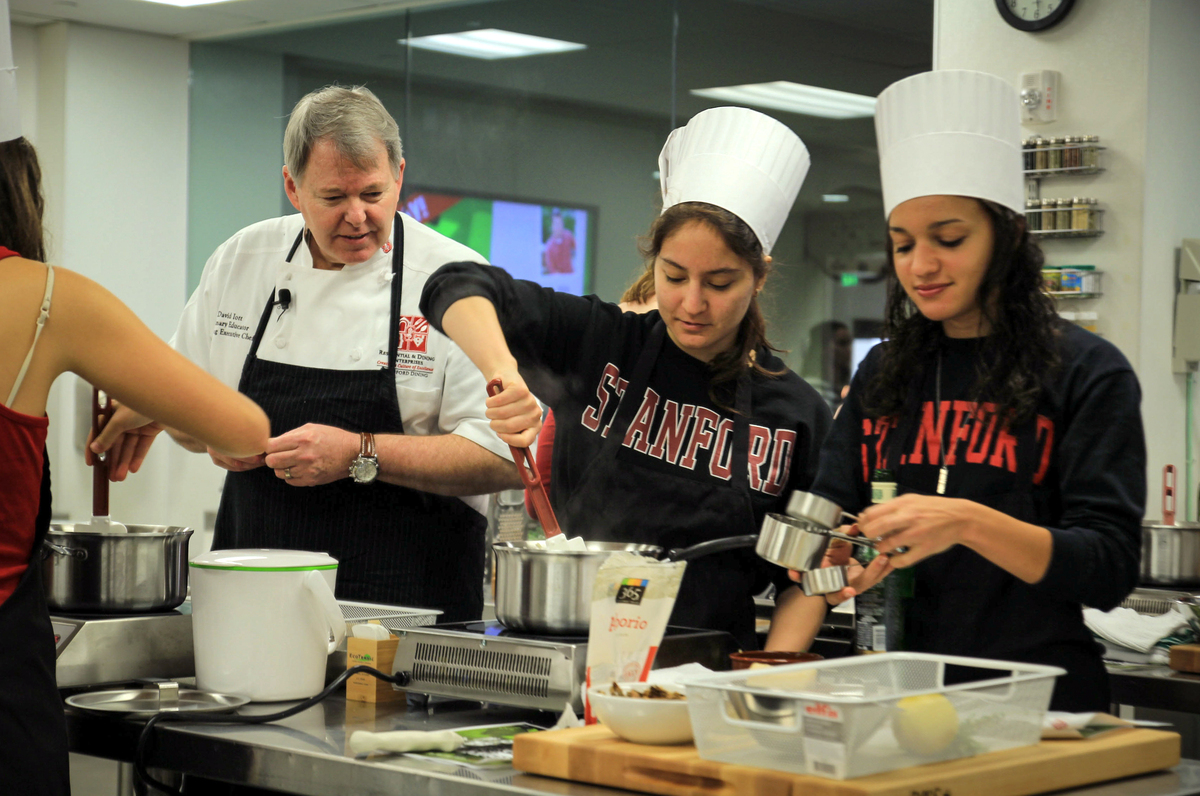 College is in many ways a time to learn life skills. But students often get so bogged down building up their resumes and studying for that Rocket Science 101 midterm that they've got no time left for the basics — like cooking.

"I've had a student say to me, 'I don't even know how to fry an egg,' " says Eric Montell, who runs the dining program at Stanford University. "You know, they have such a rich academic program here at Stanford. But students sometimes forget the practical part of, 'Wait a minute. I'm going to graduate and I'm going to have to cook for myself.' "

All that may change soon.

Last month, with the help of celebrity chef Jamie Oliver, the university launched the Teaching Kitchen @ Stanford, a program designed to teach students the basics of choosing groceries, cooking and eating healthfully.

The goal is to help young people with limited time and limited budgets maintain healthful diets — both while they're at school, and after they graduate, Montell says. "And also to inspire them, and get them excited about food."

For the program's inaugural class, Oliver himself came down to teach a small group of students how to make risotto. Upcoming classes include Healthy Cooking on a Budget, Hosting Your First Dinner Party and, for Valentine's Day, a class all about chocolate, taught in conjunction with the Culinary Institute of America.

The chefs at Stanford's dining program are working with Oliver's nonprofit Food Foundation to create a full curriculum by the start of the new school year this fall. The Teaching Kitchen is also working with Stanford researchers to develop a set of parameters to track the eating habits of students enrolled in the program, to see if the cooking classes can change the way people think about food.

Teaching college kids how to cook is more important now than ever, Montell tells The Salt, especially with obesity rates on the rise.

"If you look at the restaurants they have in most towns across the country, there's not just healthy food that's out there," he says. "And from a global climate [change] perspective, making sustainable food choices can have a bigger impact than even driving a Prius." 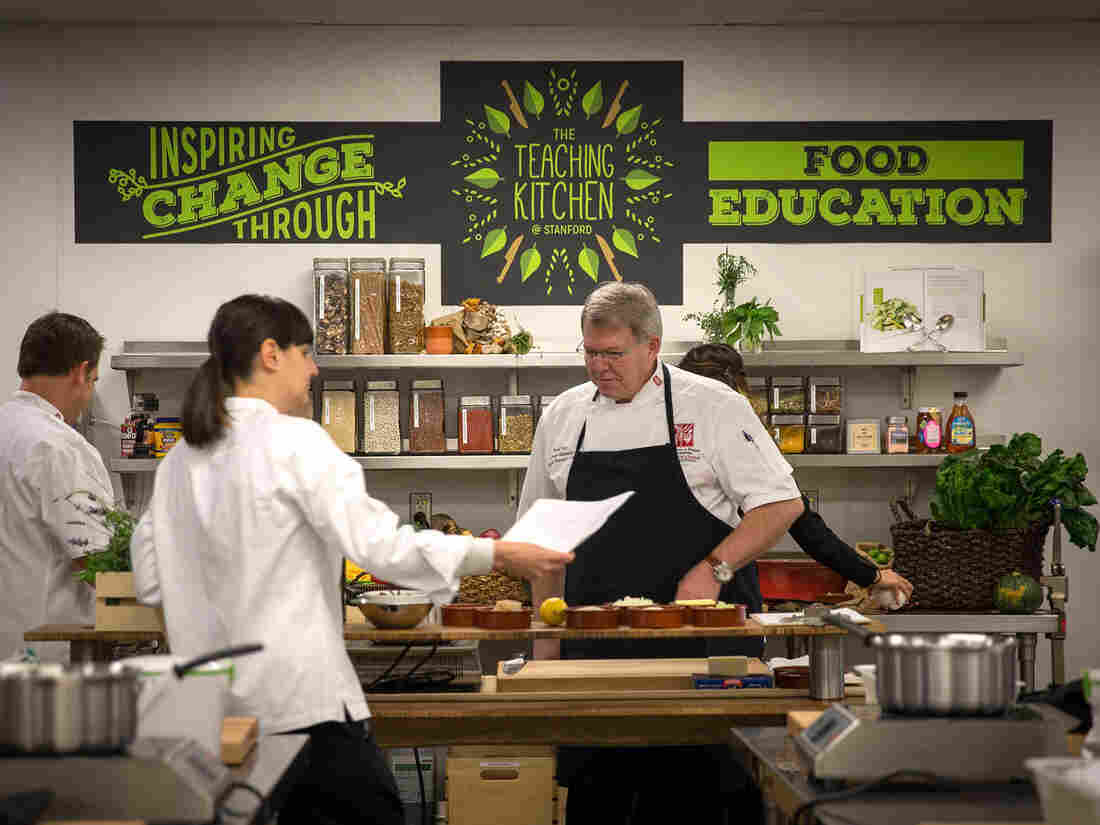 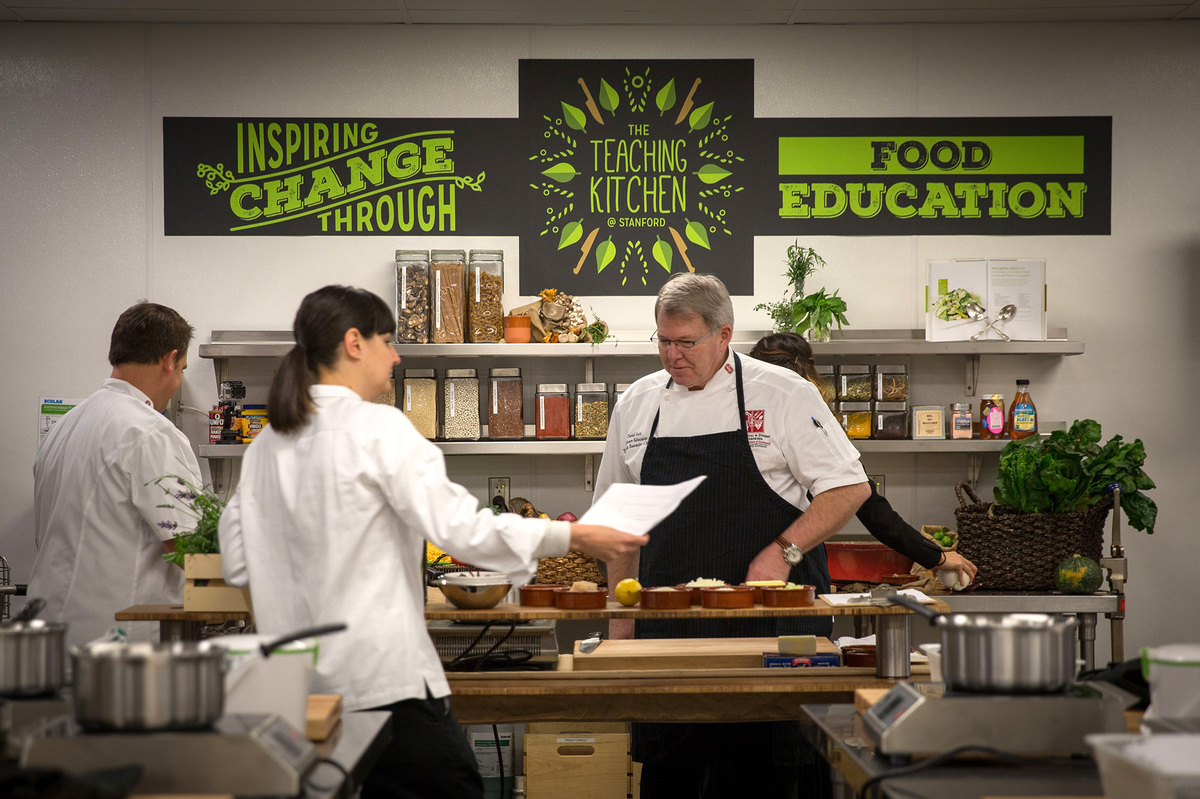 Several universities around the country have started offering one-off cooking courses. And groups like Oliver's international Food Foundation, chef Alice Waters' Edible Schoolyard Project in Berkeley, Calif., and the Urban Nutrition Initiative in Philadelphia are working to teach young kids about growing food and eating healthfully. But Stanford's program is one of the first comprehensive cooking programs designed specifically for young adults.

Kathleen Howell, a freshman at Stanford who attended Oliver's risotto class, admits she didn't really know who the TV chef was at first. "When I told my friends I was doing a class with Jamie Oliver, they were really excited, so I had to figure out why," she says.

Howell says her cooking skills are fairly basic at this point. "I think it's definitely a skill lacking in a lot of students," she says. "So when I told my dorm mates that Stanford would be offering classes, they were all really excited about it."

Like all freshmen who live in Stanford's dorms, Howell eats at the school's dining halls, and she doesn't have access to a full kitchen. Older students do, she says — but they don't always know how to use them effectively.

"I really think it's a confidence issue," says David Iott, a chef and instructor at the Teaching Kitchen. Iott has been helping to feed Stanford students since 2004, and he says he has fielded lots of cooking-related questions from students over the years.

"'They'll ask me, 'How do you roast correctly?' or 'Which knife do I use for which task?' " Iott says. "What we're trying to do with the Teaching Kitchen is demystify the kitchen a little bit."

The explosion of food blogs and YouTube tutorials means it's easy for students to teach themselves how to cook these days, Iott notes, but working with students face to face can help build confidence. "Once you take a few classes, you can start building a repertoire of easy, go-to meals," he says.

For students who don't have access to cooking classes, Iott does have a few pointers. The whole process starts at the grocery store, he says. "My No. 1 tip would be eat local and seasonal. That's when your produce is the best and least expensive."

Eating mostly vegetarian meals is another good way to bring down that grocery bill, he adds. "And never go to the grocery store hungry, or you'll buy too much."

Back at the kitchen, staples like eggs and salmon are not only healthful but also easy to cook in lots of different ways, he suggests. Or time-crunched students could try making a big pot of something to eat for the rest of the week.

"But the biggest thing," he says, "is if students aren't completely successful their first time cooking, we want them to be confident trying again."