Accessibility links
Are Farmers Market Sales Peaking? That Might Be Good For Farmers : The Salt The rate of growth in the number of farmers markets and sales there has slowed in recent years. But that could mean the entire local food movement is growing up. 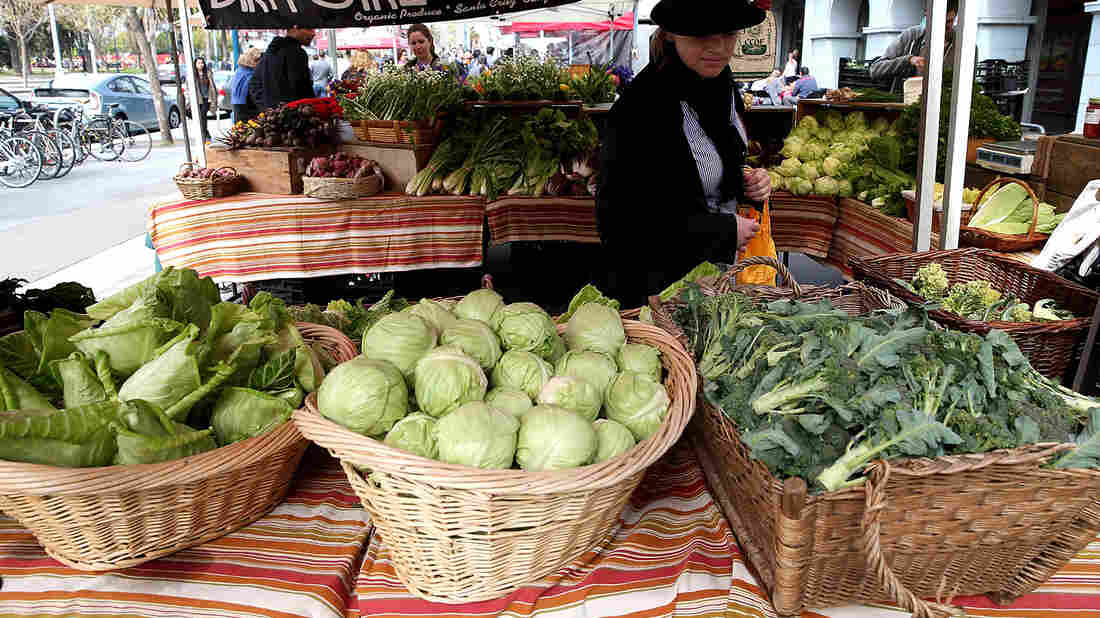 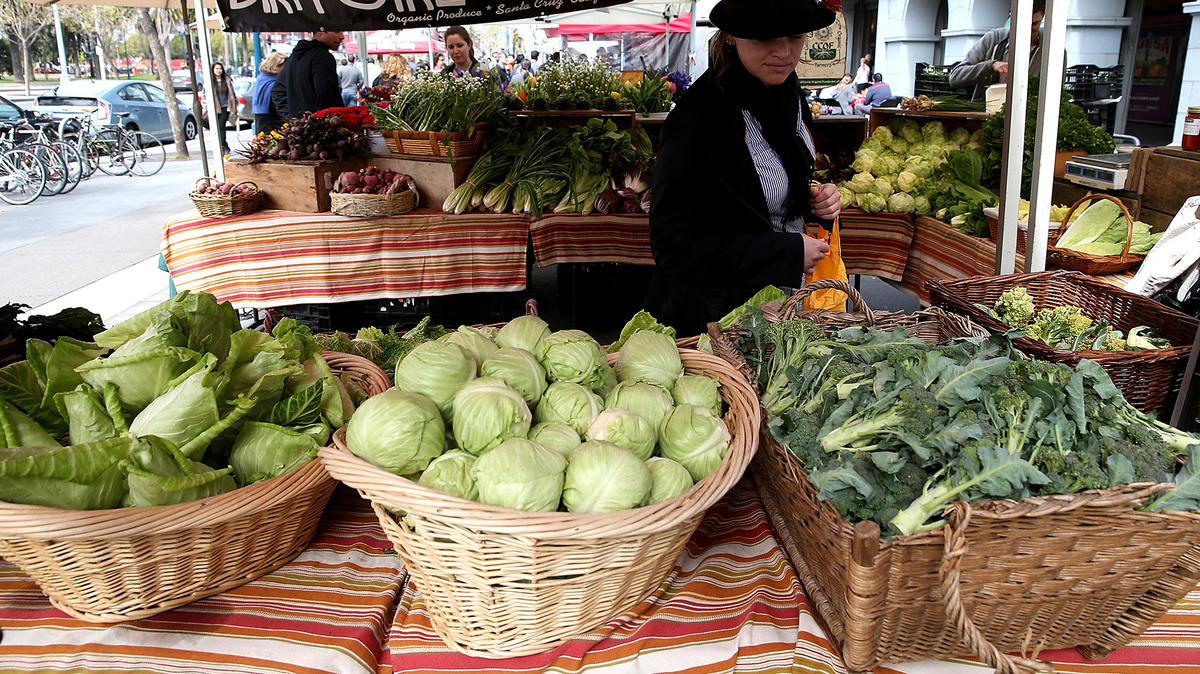 A customer shops for produce at the Ferry Plaza Farmers Market on March 27th, 2014 in San Francisco.

After more than a decade of explosive growth, sales of local food at U.S. farmers' markets are slowing. A January report from the U.S. Department of Agriculture shows that while more farmers are selling directly to consumers, local food sales at farmers markets, farm stands and through community supported agriculture have lost some momentum.

From 2007 to 2012 the value of food sales of farmers face-to-face with consumers dropped by 1 percent in real dollars. For some context, from 2002 to 2007 that value increased 32 percent. The increase was 36 percent in the five-year period before that. 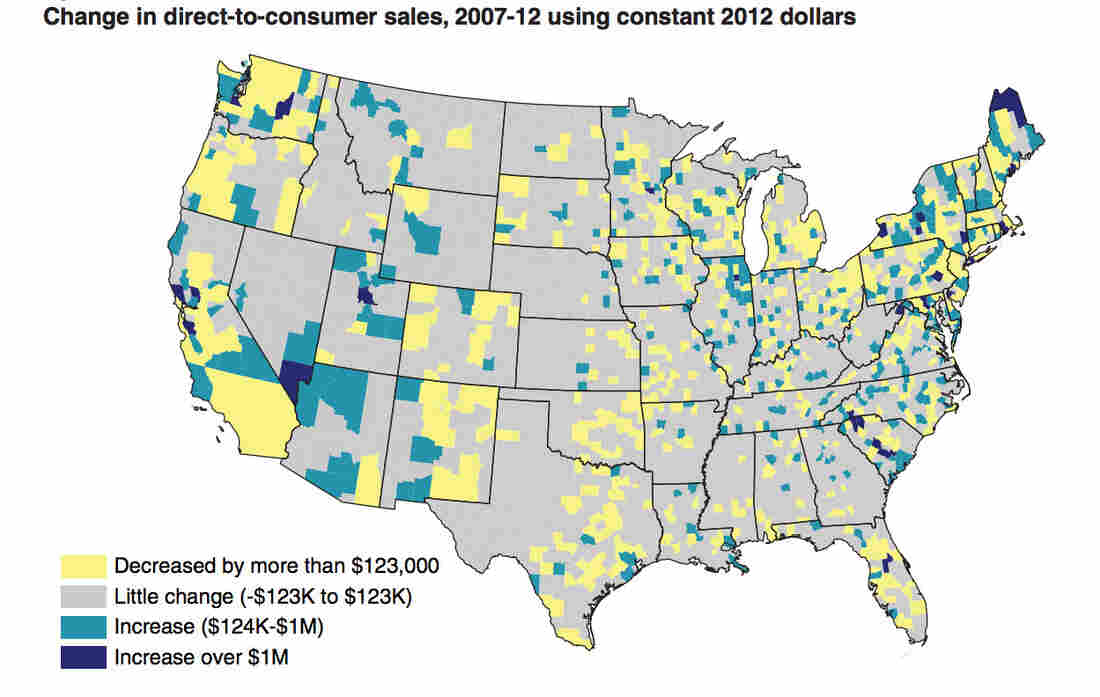 Even the rate of growth in the number of farmers markets nationwide has slowed in recent years after several years of rapid growth, rising just 1.5 percent from 2013 to 2014.

That's not necessarily bad news for farmers. In fact, it could mean the entire local food movement is growing up.

So what explains the slowdown? Here are some of the theories.

Urban Greengrocers Are Back, To Serve Big-Spending Locavores

There could be some stagnation in the number of new people buying local food. Or as the USDA puts it, "a plateau in consumer demand for local food."

Rising demand in the last several years has lead to the opening of many new markets. There were 8,268 farmers' markets operating in 2014, up 180 percent since 2006.

"In densely populated urban areas, farmers' markets often compete with each other for vendors and consumers," the report reads. "In other areas, newer, more strategically located farmers' markets may lead to the decline of previously established markets."

There are only so many dollars out there being spent on local food. At a certain point regions can be saturated with too many markets, fragmenting the consumer base for local food. 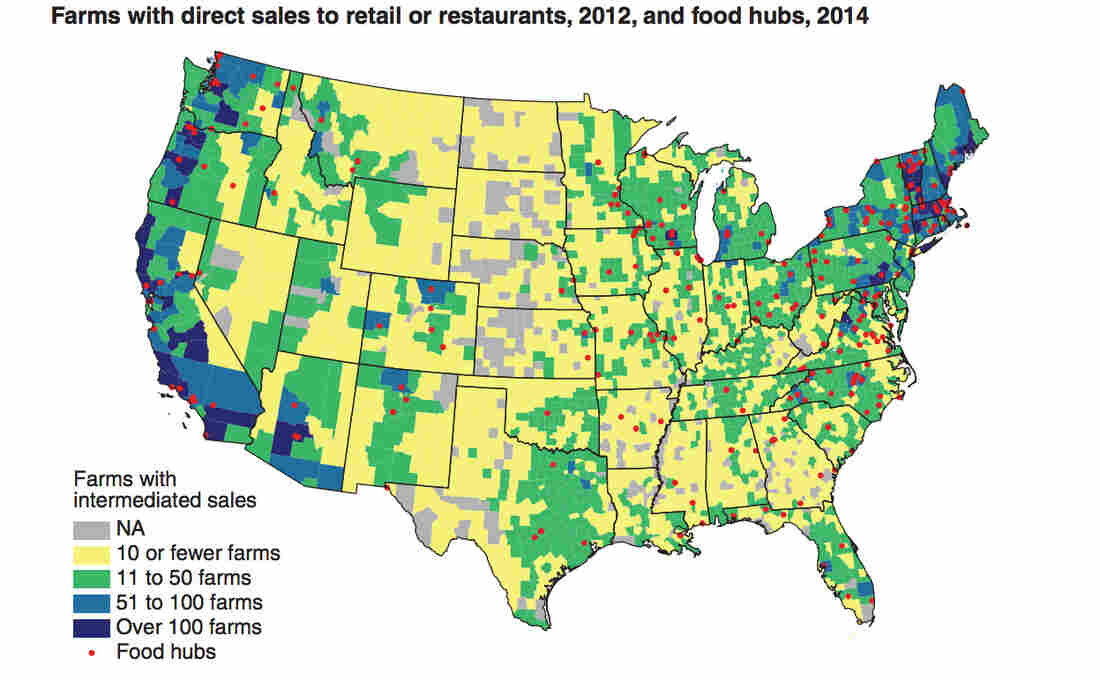 "That's been something producers have been concerned about," says Ashley Colpaart, coordinator for the Northern Colorado Food Cluster, a group that supports the local food system. "And a reason why they've been pushing for a singular, community marketplace that's the one-stop shop for local food."

On the Farmers Market Frontier, It's Not Just About Profit

The Local Food Economy Is Maturing

Farmers markets may be a good marketing tool for a small farm, but they can be onerous to prepare for, with slim profit margins, says Sarah Low, a USDA economist and lead author on the report.

Because of that Low says farms are increasingly using middlemen to sell to restaurants, grocery stores and distributors. With an increasing share of their produce, dairy or meat going to those channels, some farmers may choose to forgo the farmers market.

"It's just not as cost-effective for producers to be face-to-face with consumers," Low says. "A lot of farmers like to spend their time farming, not necessarily marketing food."

Other figures in the report support this theory. While sales at farmers markets declined, food hubs and farm-to-school programs exploded. From 2007 to 2012, the number of food hubs — local groups that connect farmers to food-using businesses — increased 288 percent. Here's an even more ridiculous number: Since 2006, the number of school districts with farm-to-school programs jumped 430 percent, according to the USDA.

"It's much more efficient for the farmers to sell to a food hub or sell to a grocery store," Low says. "It's probably not that interest is declining; it's that these sales are shifting." 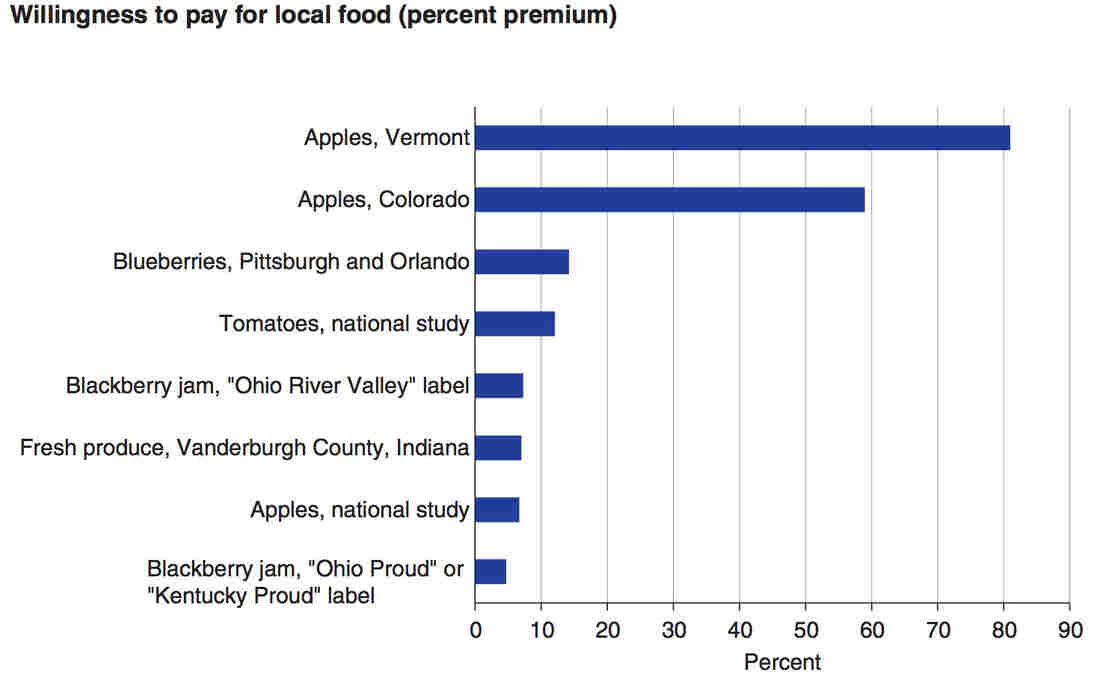 The Recession Slowed Everything Down

Spurred by the collapse of the housing market in 2008, the recession likely played some role in slowing sales at direct-to-consumer sites, Low says.

The report notes some consumers view local food as expensive. A Mississippi case study in 2001 found that food sold at farmers' markets and farm stands didn't compete with grocery stores. Instead they were perceived as complementary activities, not replacements. It could be that in tough economic times consumers cut out spending at farmers markets they saw as complementary and not as necessary.

Essentially, this theory acknowledges that the Great Recession touched nearly every part of the economy and not even local food was able to weather it, nor to secure a rebound by the time data was collected in 2012.

A version of this story appeared KUNC.org.