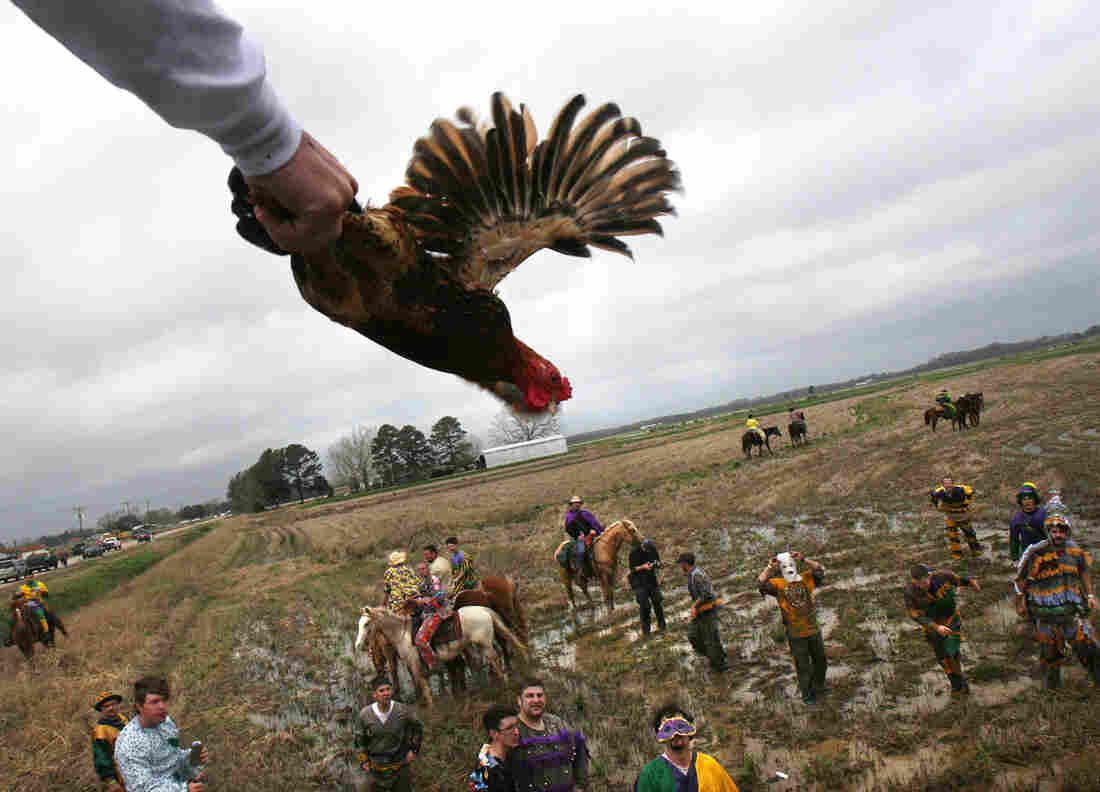 The annual Courir de Mardi Gras in Mamou, La., in February 2008. In the Cajun country tradition, revelers go house to house, collecting ingredients for gumbo from local families. Here, the host tosses a live chicken from a rooftop for the participants to catch — which can be tricky, considering the festivities often begin with early-morning drinking. Carol Guzy/Washington Post/Getty Images hide caption 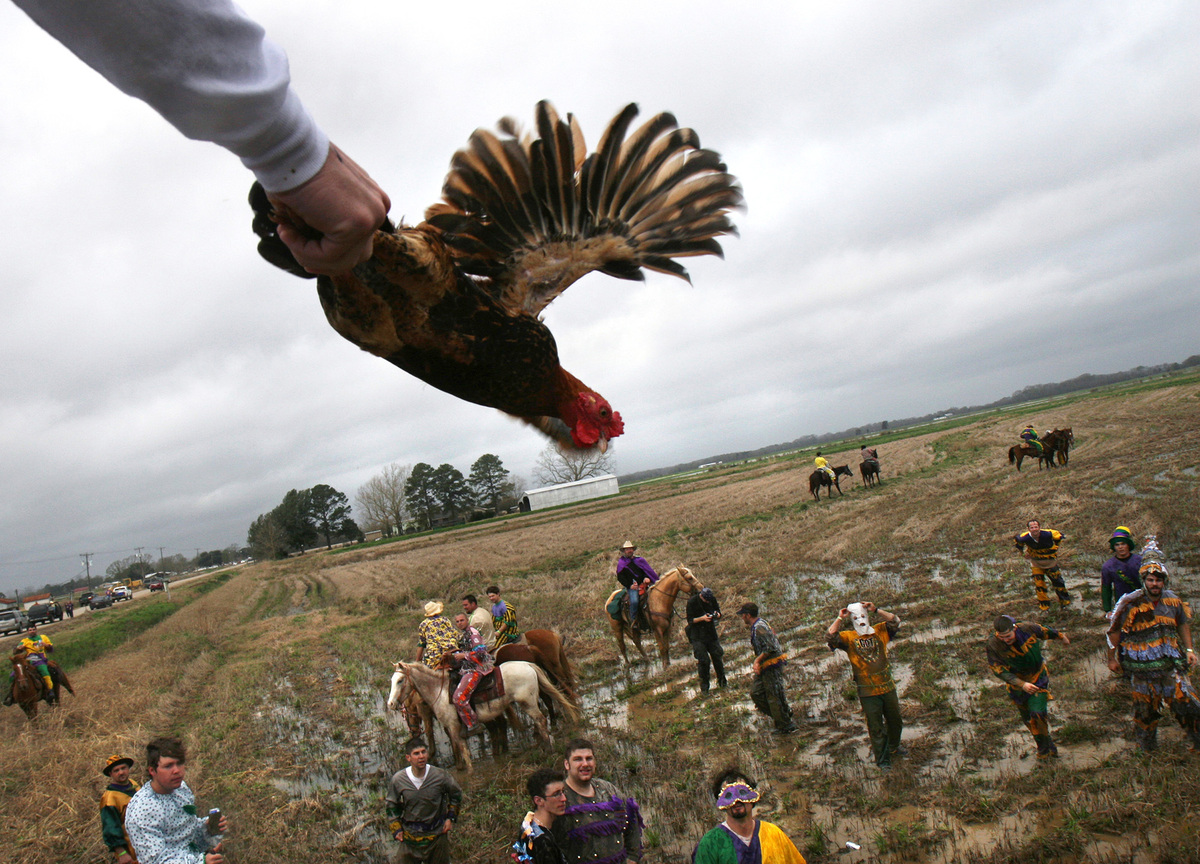 The annual Courir de Mardi Gras in Mamou, La., in February 2008. In the Cajun country tradition, revelers go house to house, collecting ingredients for gumbo from local families. Here, the host tosses a live chicken from a rooftop for the participants to catch — which can be tricky, considering the festivities often begin with early-morning drinking.

Mardi Gras is about ephemera, the thrill of the chase. In New Orleans, that's cajoling a strand of special glass beads or a glittered coconut from the hands of a stranger high up on a parade float. But the moment that trinket is nabbed, the recipient might think: Now what am I going to do with this?

Cajun Mardi Gras, however, in the small towns south and west of New Orleans, raises no such question. Because what you aim to catch is very useful. And edible.

It's a squawking, flapping live chicken.

Courir de Mardi Gras translates roughly as "the run of the Mardi Gras." Instead of a parade in which gifts are tossed to onlookers, in this Mardi Gras tradition, the participants themselves become beggars. And the term "mardi gras" is used to refer to the group itself, not just the holiday. Costumed in tattered, homemade fringe and calico rags, their faces covered by hand-painted wire mesh masks, the "mardi gras" revelers ramble house to house — dancing, drinking and collecting ingredients for a big pot of gumbo. All the while they sing:

The Mardi Gras come from all around

From all around the center

They pass once a year

To ask for charity

"Even if it's a skinny chicken, we'll take it," they later sing, in lyrics laid down by the Balfa Brothers, Cajun music icons of the mid-20th century. 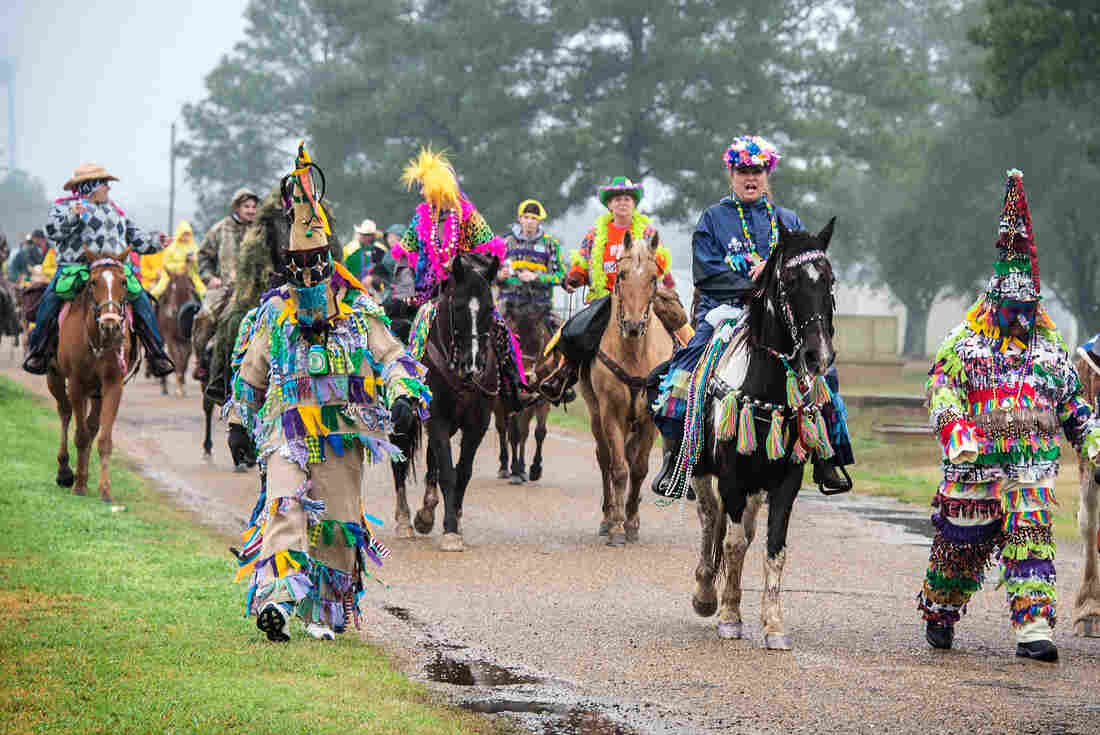 Costumed participants in the Courir de Mardi Gras in Eunice, La., in February 2013. The courir is a procession on foot, horseback and by trailer, rooted in a rural custom of gathering ingredients for a communal meal from area farms. David Simpson/St. Landry Parish Tourist Commission/AP hide caption 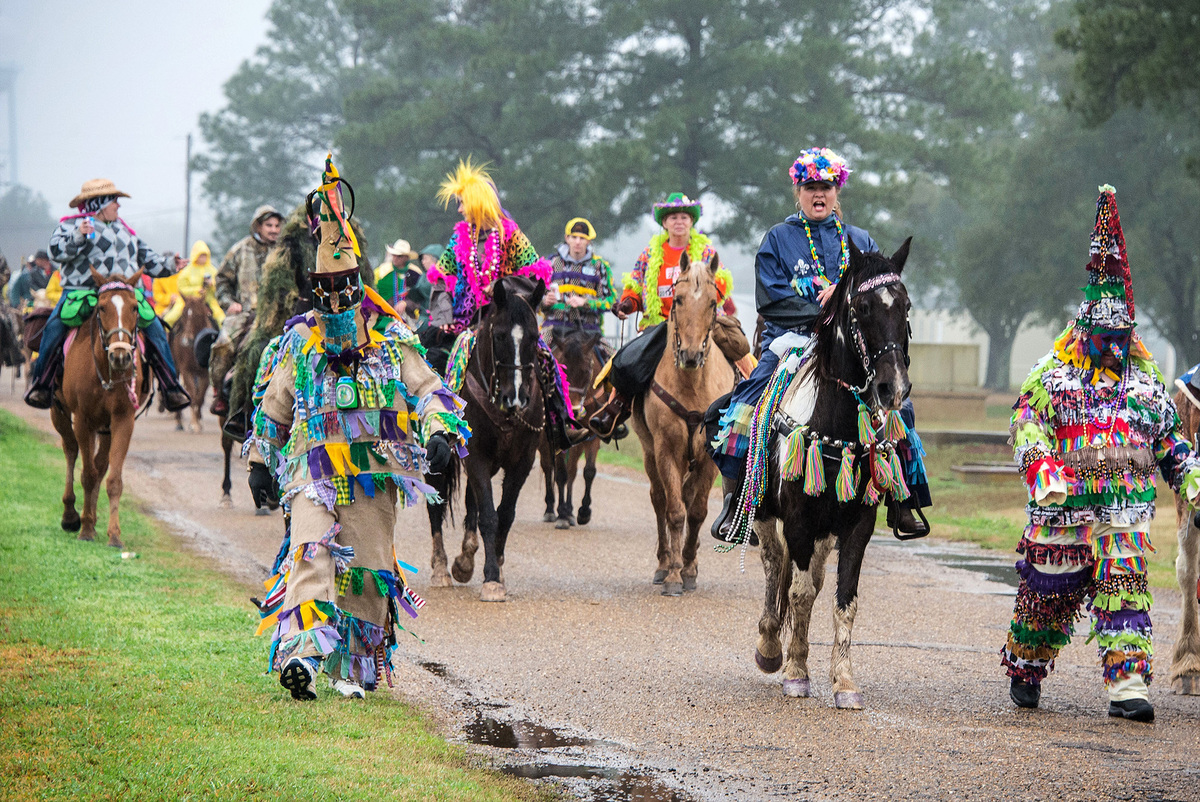 Costumed participants in the Courir de Mardi Gras in Eunice, La., in February 2013. The courir is a procession on foot, horseback and by trailer, rooted in a rural custom of gathering ingredients for a communal meal from area farms.

Music is as integral to Cajun Mardi Gras as food, with fiddle, accordion and guitar players riding with the party. A capitain keeps everyone in check, barking orders and wrangling the party — anywhere from a few dozen to a few hundred people. On foot, or in trailers drawn by horses or tractors, they set out in early morning mist.

It's a planned route – the hosts at each stop know what they're getting into. "And they don't always make it easy," says Ray Brassieur, a professor of anthropology at the University of Louisiana Lafayette and a Mardi Gras guitar player. The group waits while their capitain gets the OK from the head of household.

"Then comes the chasing part, the fun," Brassieur explains. "The host may get up on the roof." She throws the chicken from up there down to the crowd. "Sometimes they give a guinea hen," he says, "and those sure can be hard to catch. They run fast, might even fly up in a tree."

Keep in mind the alcohol drinking starts around 8 a.m. "Or even just continues from the night before," he says.

Actually catching a chicken while running through a muddy field, inebriated and in costume? "It's quite a feat of chance," says Guy Martin Plauche Wenzel. "So when you actually get it in your hands, you think you are dreaming. That is also an interesting thing about the run ... it reverts you back to a more primitive state, where you have to run after your food."

It's that communal experience, that "primitive state," that draws Wenzel back each year to his rural Louisiana roots. Around the small town of Chataignier, he plays fiddle in the local Mardi Gras. He's an industrial designer in Los Angeles the rest of the year.

At the halfway point each year, his group stops at the grave of Dennis McGee, a famous Cajun fiddler, where Wenzel and the other musicians play in tribute, and leave an offering of beer or whiskey.

Megan Brown is a rarity: a young, female capitaine. It's hard to imagine her soft, sweet voice whipping a crowd of drunks into shape, much less brandishing a bull whip (handmade!). But to her, "Mardi Gras is all about reversal of everyday roles."

In French, she asks each hosts what they can give – rice? onion? a chicken? – before unleashing her revelers on their property. Her group of 25 or so has an annual gas station stop for boudin, a Cajun pork sausage made with liver and rice, to keep them fueled as they sprint after stray poultry.

But the chicken chase these days is mostly for entertainment. Cooks stay behind to start the roux for gumbo, while the party makes its route. By mid-afternoon, it's ready for them.

What does gumbo for 400 look like? Big pots? "More like industrial-sized vats," Wenzel says, "perched on stands over propane flames, cooked outside." The gumbo is not as good as his mom's, but "you're tired, cold, so it always tastes great."

It's at meal time that the masks come off, so everyone can see who's who — and so spoons can get in mouths. Live music continues as the afternoon winds down.

By the time the sun sets on Mardi Gras, the revelers are spent, ready to welcome the fasting and quiet of Ash Wednesday.

Eve Troeh is the news director at member station WWNO in New Orleans.