Accessibility links
Have Big-Box Superstores Helped To Make Us Fat? : The Salt A study argues that the density of restaurants and large-scale food retailers in parts of the U.S. has been a major factor in the rise of obesity. But some see it as a "chicken and egg" problem.

Have Big-Box Superstores Helped To Make Us Fat?

Have Big-Box Superstores Helped To Make Us Fat? 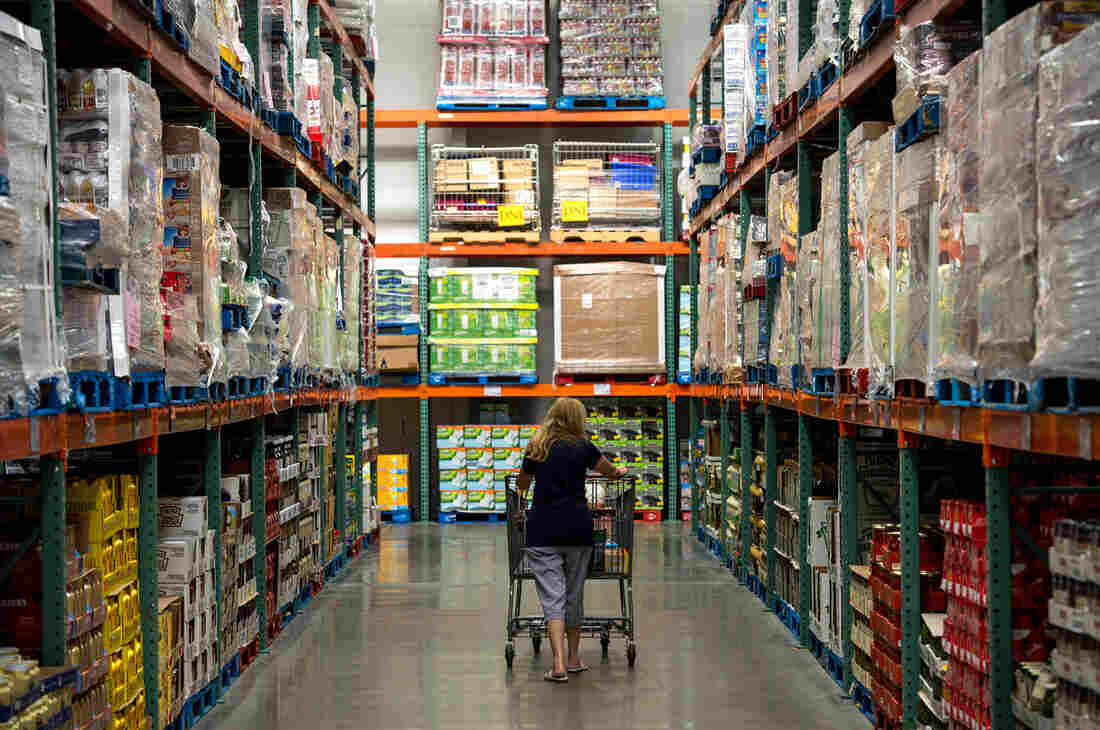 A woman pushes a cart at a Costco store in Hackensack, N.J., in 2013. Big-box stores are effective delivery devices for fattening foods, economists argue in a new study. Ron Antonelli/Bloomberg via Getty Images hide caption 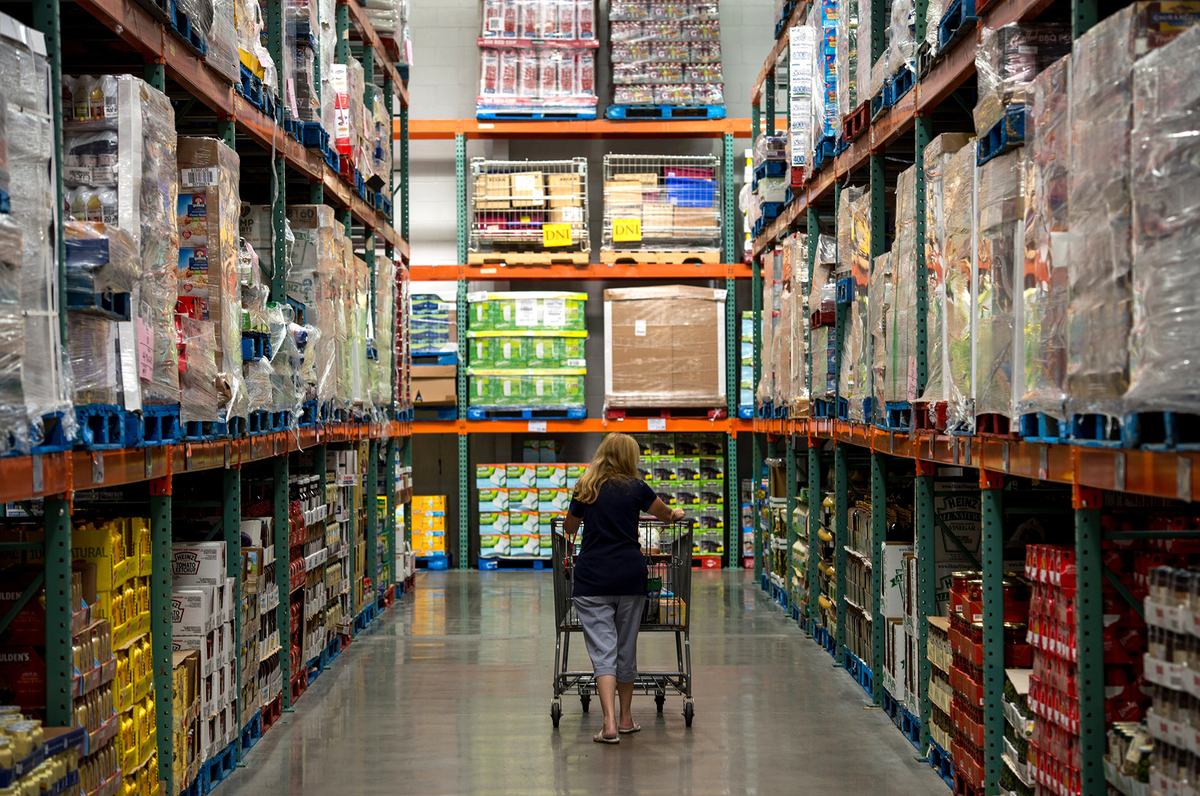 A woman pushes a cart at a Costco store in Hackensack, N.J., in 2013. Big-box stores are effective delivery devices for fattening foods, economists argue in a new study.

The humorist Bill Bryson once wrote that "the purpose of the modern American suburb is to make sure that no citizen is ever more than 500 yards from a food product featuring melted cheese."

That's an exaggeration, but health officials have long worried that our environment of plentiful, cheap and easily accessible calories is contributing to obesity.

A group of economists argues in a new paper published by the National Bureau of Economic Research that the prevalence of restaurants and big-box grocers and warehouse clubs contributes mightily to weight gain. "Food's gotten cheaper and more readily available, so we eat more of it. It's really simple," says study coauthor Charles Courtemanche, a health economist at Georgia State University. "At least a sizable portion of the rise in obesity can be characterized as responses to economic incentives."

A major report from a group of government-appointed nutrition experts released Thursday noted that about two-thirds of American adults are overweight or obese and nearly half suffer from chronic conditions related to poor diet and exercise. Many studies have shown that additional caloric intake rather than reduced exercise is driving the trend.

A big part of the problem of overeating, Courtemanche and his colleagues argue, is that restaurants and big-box stores are such effective delivery devices for loads of fattening foods.

"With 20 years of data, you can really identify the exact moment when a new Wal-Mart or new restaurants came in and you saw the rise in BMI," Courtemanche says.

The study, coauthored by researchers at the universities of Iowa, Virginia and Louisville, looks at the nation as a whole, rather than focusing in on specific locales (although Courtemanche says there are clear regional differences). The authors compared information they had compiled about restaurant and big-box-store locations with survey data looking at individual health, as well as state-level data examining more than two dozen economic and demographic factors.

What they found was that the density of restaurants and large-scale food retailers in particular areas was a major factor between 1990 and 2010 in the nationwide rise of obesity and BMI, or body mass index, which measures weight against an individual's height. They attribute nearly half the rise in severe obesity — referring to people who are more than 50 percent above their ideal weight — to such businesses.

Courtemanche concedes that it would be impossible to prove to a certainty that big-box stores and restaurants cause increases in obesity, "unless you're able to randomize which counties get a Wal-Mart and which ones don't." But he says even after controlling for other factors, such businesses have a measurable effect.

But others focused on the obesity problem are skeptical. Health officials have long debated how much our evolving environment, such as a lack of sidewalks and the prevalence of fast-food restaurants, has contributed to the obesity epidemic. And there's a potential "chicken and egg" problem with the big-box analysis, says Ted Kyle, advocacy adviser to the Obesity Society, a Maryland-based group that promotes obesity research.

Kyle emphasizes that he doesn't mean retailers go looking for areas with large numbers of obese residents, but that they do naturally seek customers who will purchase large quantities of packaged goods.

So, do the big-box stores cause obesity, or simply serve people with a propensity to buy in big amounts?

"They're not going to put big-box stores in a place where there aren't people who are going to shop there," says Marlene Schwartz, director of the Rudd Center for Food Policy and Obesity at the University of Connecticut. (The center was formerly at Yale University.)

Still, Schwartz notes that the study is careful to filter for other possible explanations, such as income levels and population density and age. Big-box stores and restaurants, she says, are part of the perils of abundance in the American diet.

Our brains respond greedily to a surfeit of food, she suggests. "Historically, food didn't last forever," Schwartz says. "You had to eat food when you had it [so] the idea of eating more when you have so much available makes sense to me."

Wal-Mart and other retailers say the study does not take into account their efforts to offer more healthful choices and reduce the number of calories consumers take home with them. They also cite their involvement with first lady Michelle Obama on her "Let's Move" initiative and the Healthy Weight Commitment Foundation.

Still, they haven't stopped selling foodstuffs in mass quantities. Yet the problem may not be that food retailers are seemingly everywhere, selling chocolate pretzels in 3.5-gallon containers, but how people react to such goodies, suggests Brian Wansink, a former federal nutrition official who is a professor of consumer behavior at Cornell University.

When people "stockpile" bulk foods, they're likely to eat a lot of it in a short time, he says. Like, half of it within a few days.

A couple of simple steps can drastically reduce such overconsumption, Wansink says. Put that 36-bag package of chips in a cupboard that's just a little bit out of the way, such as in a pantry in the basement. Also, breaking up the packages — by dividing chips, for instance, into smaller bags — helps people to slow their eating down appreciably.

"If we broke the food into smaller units, like 150 or 200 calories, it reduced how much people ate to about 10 percent more than they typically would, instead of it being a whole lot more," says Wansink, who recently published a book, Slim by Design: Mindless Eating Solutions for Everyday Life. "Repackaging that huge, money-saving item into smaller subitems and putting them into a cupboard that's out of sight are very simple steps and don't involve willpower or keeping a food diary."

The conclusion is thus the same as always with dietary information. Chips, cookies and melted cheese are all around us. It's OK to buy all you want, Wansink suggests, and enjoy. Just don't overdo it at any given time.