Accessibility links
Acidifying Waters Are Endangering Your Oysters And Mussels : The Salt Many coastal communities that harvest shellfish could soon be hurt by ocean acidification, a study finds. The Pacific Northwest and New England are hot spots, as are estuaries along the East Coast. 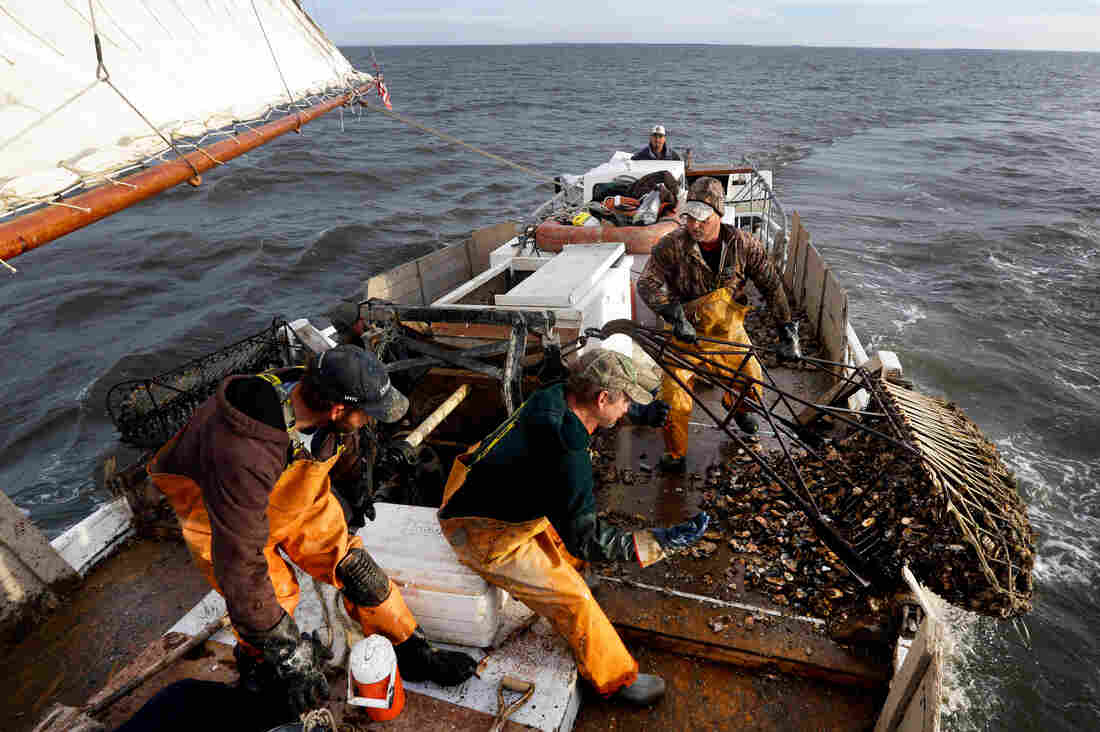 Crew members pull an oyster dredge in Tangier Sound of the Chesapeake Bay near Deal Island, Md., in 2013. A study found that the Chesapeake Bay shellfishery is a "hot zone" for ocean acidification. Patrick Semansky/AP hide caption 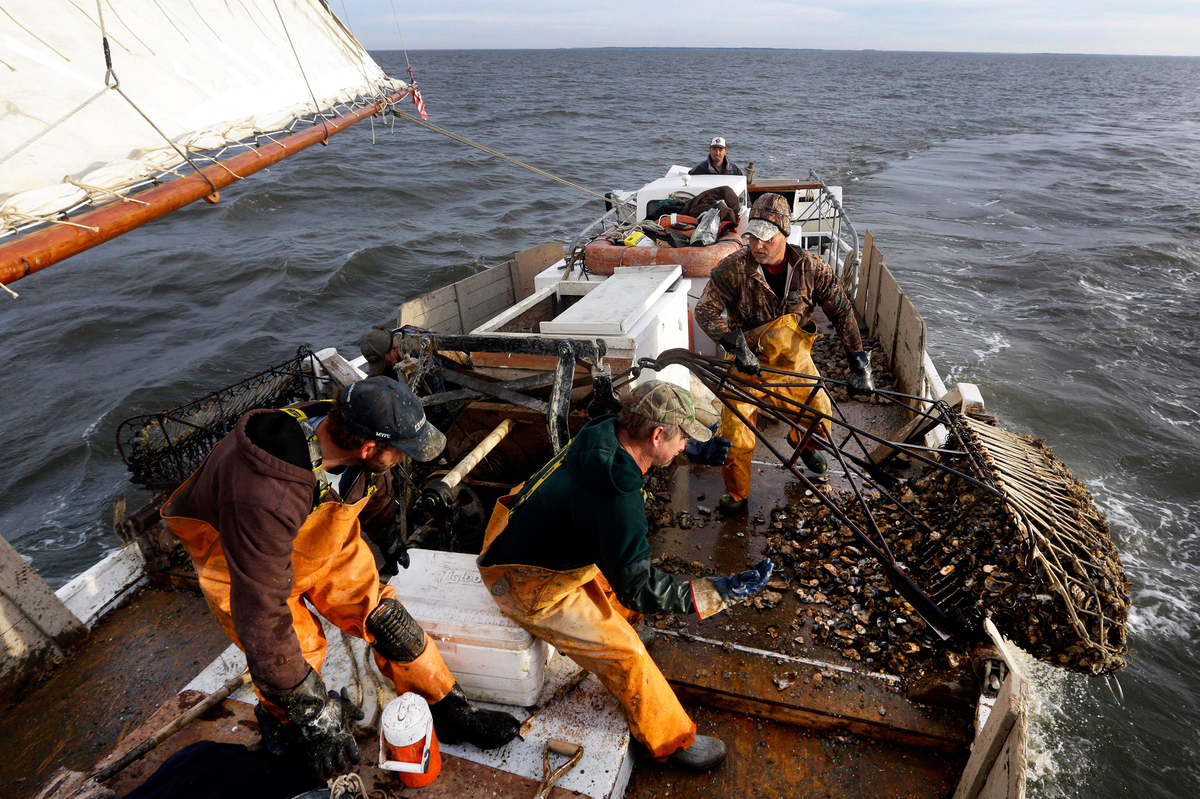 Ocean water in parts of the world is changing. Its chemistry is very slowly becoming more acidic, like lemon juice, and less alkaline, a la baking soda.

The change so far is small — you wouldn't notice if you swam in the ocean or even drank it (not recommended, in any case). But numerous scientific studies show that it could get worse. One reason is that as humans produce more carbon dioxide, a lot is absorbed into the oceans. That makes the water more acidic. 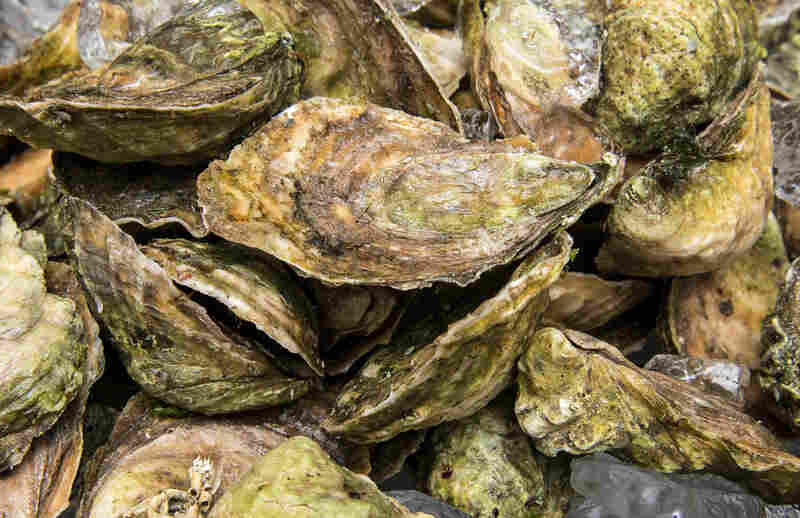 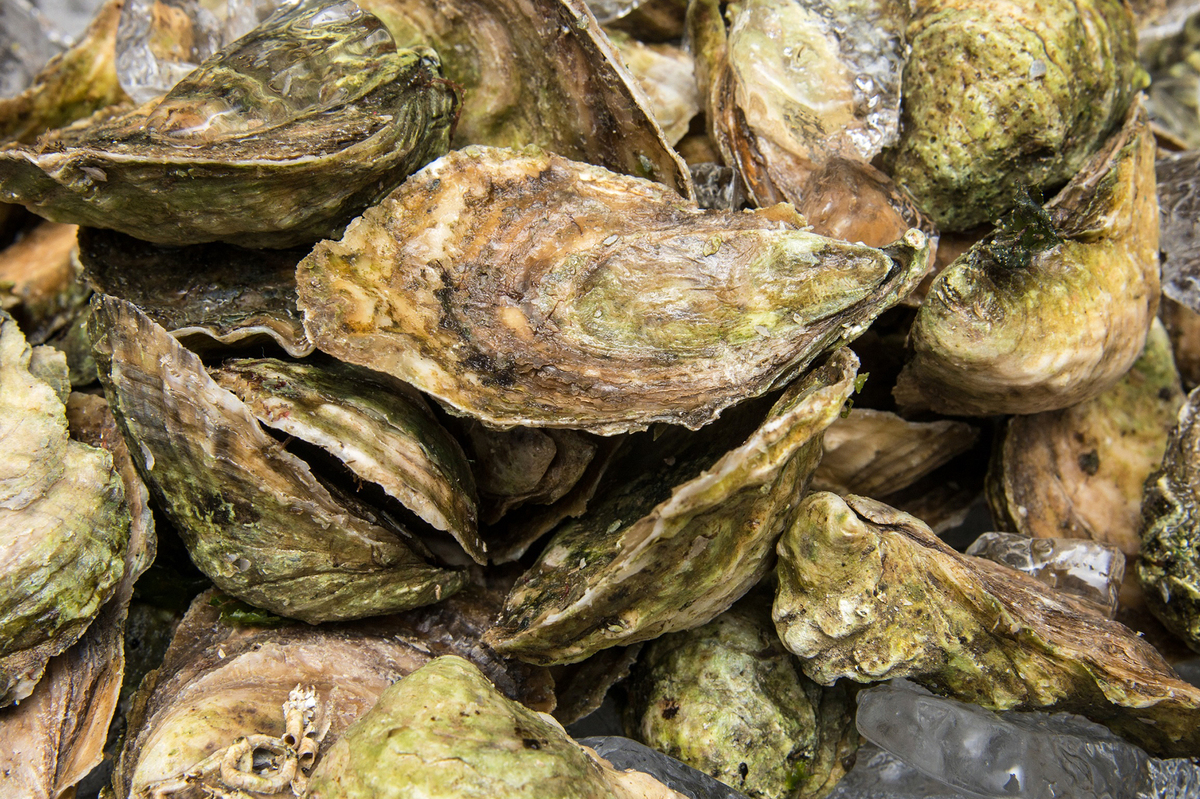 So, shellfish. Why is this bad news for them, and the $1 billion industry devoted to them in the U.S.?

Well, anything that builds a shell depends on calcium compounds in water. If water gets too acidic, it interferes with the chemistry of shell-building. So oysters, mussels, scallops and lots more will suffer in an increasingly acidic ocean. Crabs and lobsters and coral reefs will feel it as well, but mollusks are most vulnerable.

According to research published Monday in the journal Nature Climate Change, you can already measure the harmful effects on shellfish in places like the Pacific Northwest.

The study is billed as the first analysis of how shellfisheries in 15 states in the U.S. are likely to fare as this acidification continues. With 17 authors from 13 academic, government and environmental institutions, it examines not just ocean chemistry but local coastal pollution and how that combines with acidification.

And the news for the mollusk industry, as we said, is bad, though not without hope. 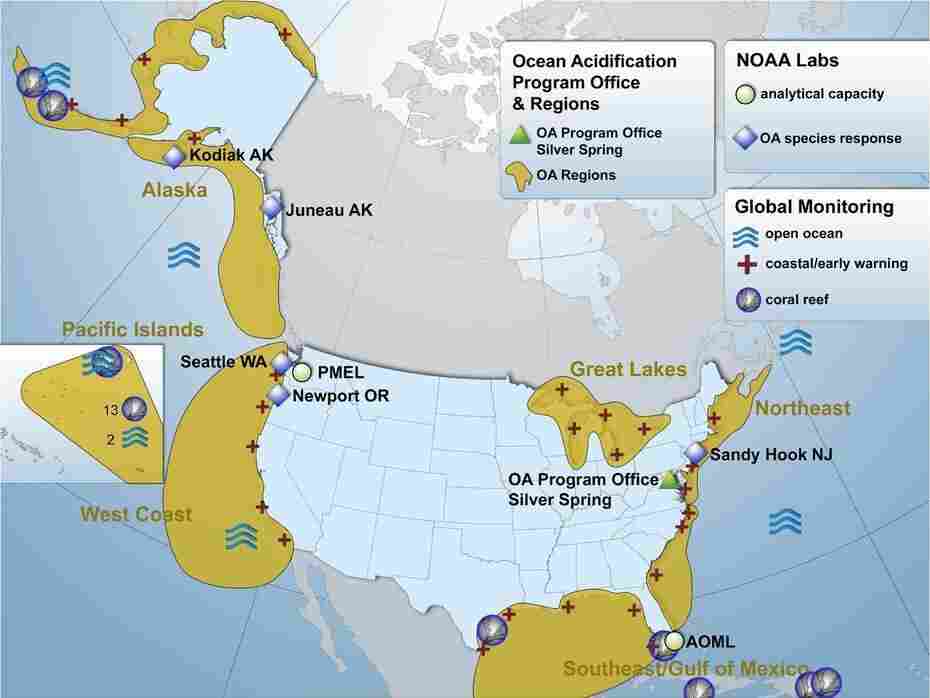 Some of the coastal areas could see damage from acidification within a few years. Southern Maine and southern Massachusetts are hot spots, as are estuaries along the East Coast, like the Chesapeake Bay and Long Island Sound. The latter are suffering from a lot of nitrogen pollution already from agricultural and sewage runoff. That pollution exacerbates the effects of acidification.

The study also points to the Gulf of Mexico as particularly vulnerable, in part because so few species of shellfish are harvested there. The more diverse the species, the study authors argue, the better chance a few will be resistant to the Gulf's changing chemistry.

The study also points to coastal communities in New Jersey, Virginia and Louisiana that have relatively less monitoring of ocean acidity under way.

The hopeful note in the research is that there are solutions short of stopping the emission of carbon dioxide into the air. Reducing local nitrogen pollution in rivers and bays along the coasts is one. Raising shellfish where the ocean is less affected is another. There may also be strains of oysters that are resistant to acidity.

"There is plenty we can do to help these at-risk communities while protecting the environment," Lisa Suatoni, an ecologist at the Natural Resources Defense Council and one of the authors, said in a statement.