Accessibility links
Army Corps Project Pits Farmland Against Flood Threat : The Salt A levee project would cordon off lucrative farmland along the Mississippi River in southeastern Missouri. But towns in Illinois say that puts them at risk of flooding while protecting rich farmers. 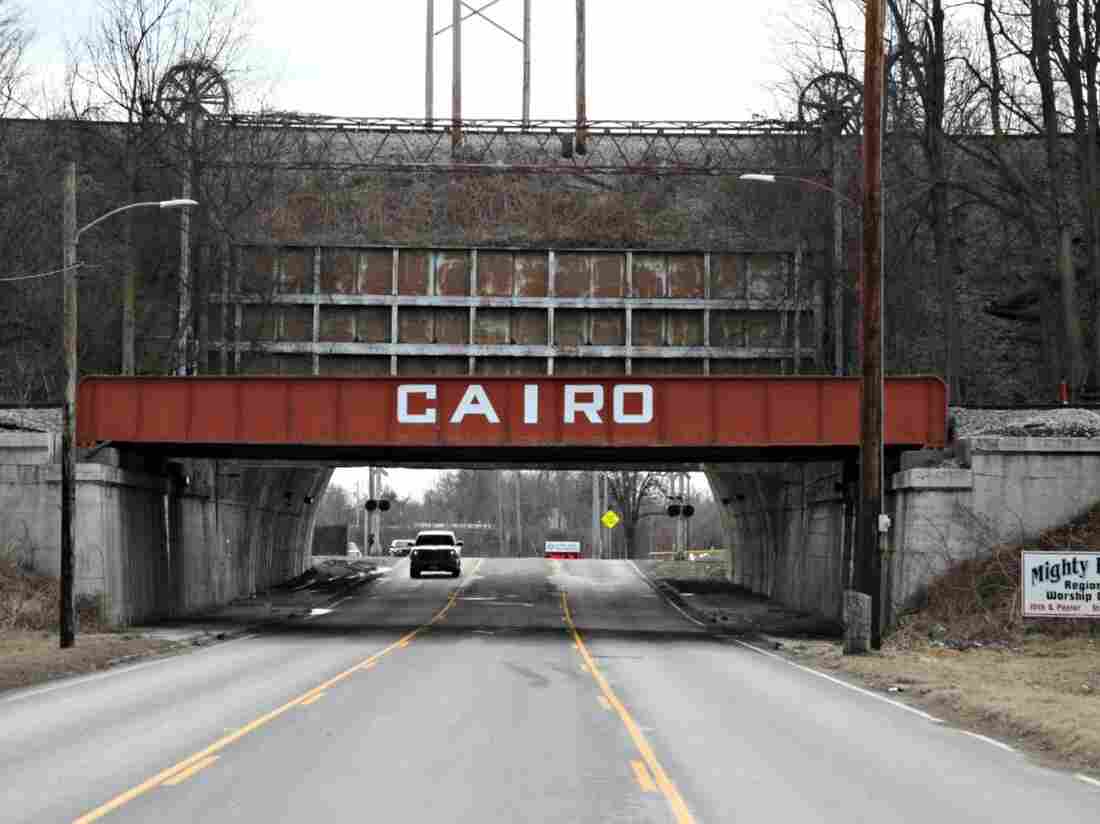 A big, metal gate designed in 1914 to protect Cairo, Ill., from flood waters marks the entrance to the town. Today, Cairo's population has dwindled to about 2,800 due in large part to floods, evacuations and a suffering economy. Kristofor Husted/KBIA hide caption 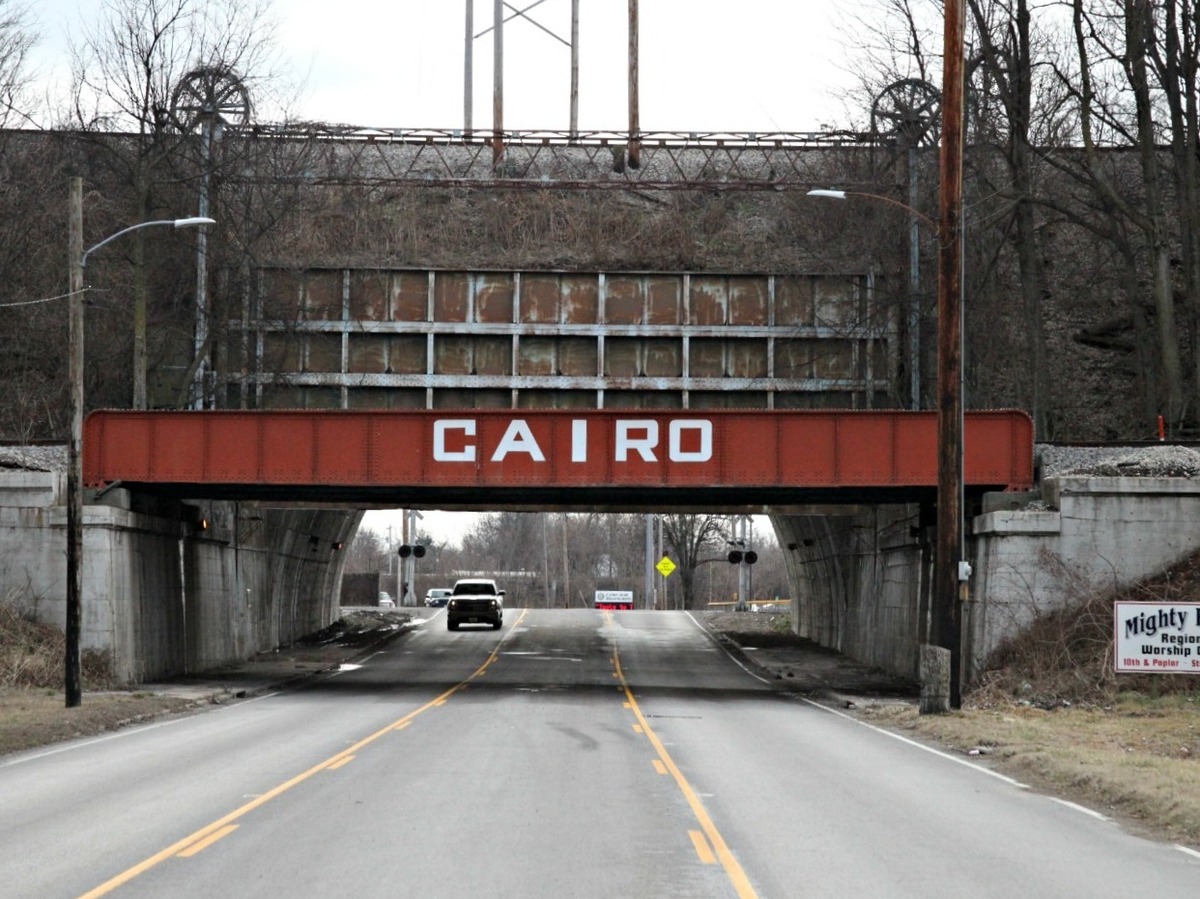 A big, metal gate designed in 1914 to protect Cairo, Ill., from flood waters marks the entrance to the town. Today, Cairo's population has dwindled to about 2,800 due in large part to floods, evacuations and a suffering economy.

For years, some small towns and farmers along the Mississippi River have been battling each other over a flood project set up by the U.S. Army Corps of Engineers.

On the western shore, farmers in southeast Missouri need the project to protect their valuable farmland. But small river towns on the eastern side of the river say the project protects those influential farmers at the cost of their small communities. As a last-ditch effort, the opposition to the project is asking the Environmental Protection Agency to kill the project all together.

Lynn Bock is the attorney for the St. John Levee and Drainage District in New Madrid, Mo. He lives at the southern end of the floodplain. Part of the levee system there follows the Mississippi River path. On the other side of the levee are thousands of acres of productive farmland.

"When you look at these fields, that's our strip mall. That's our economy in this part of the world," Bock says. "We make it or don't make it based on how farmers do."

The levee system here is part of a $165 million dollar project called the New Madrid Floodway Project that's designed to protect the land around the Mississippi River. Farmers grow millions of dollars' worth of soybeans, corn, cotton and rice there. 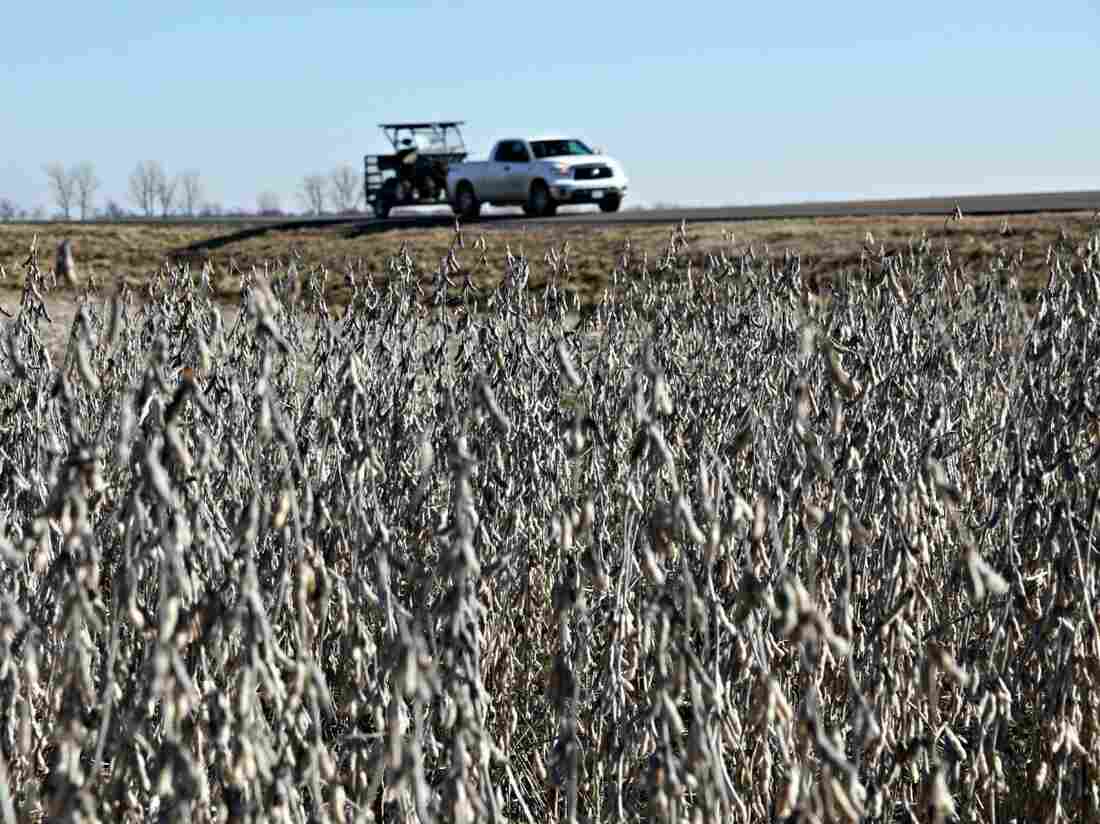 A truck drives on top of a levee that protects a soybean field in New Madrid County, Mo., when the Mississippi River floods. Kristofor Husted/KBIA hide caption 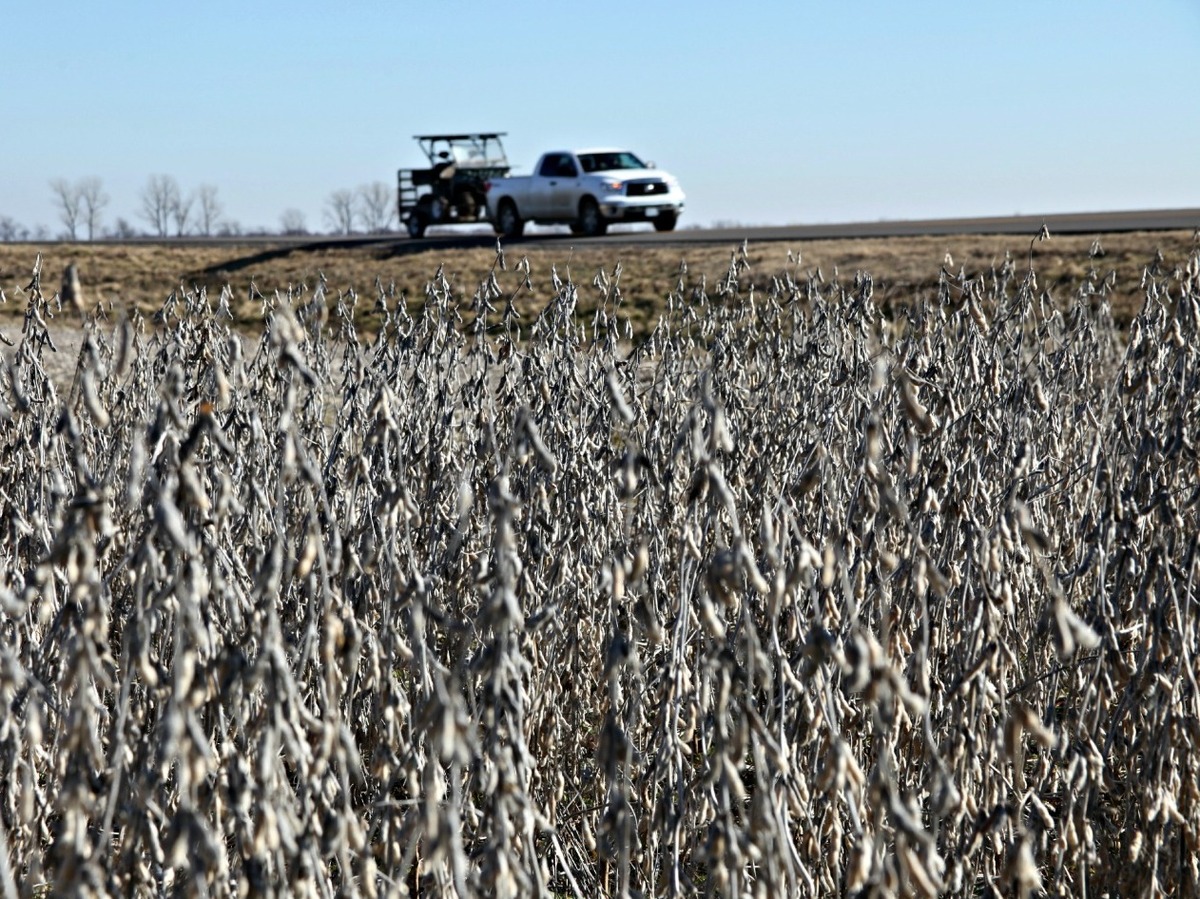 A truck drives on top of a levee that protects a soybean field in New Madrid County, Mo., when the Mississippi River floods.

The farmland isn't without its weaknesses, though. During major Mississippi River floods, the Army Corps diverts the excess water into this floodplain, called the New Madrid Floodway.

Now, the Corps wants to effectively separate the farmland from the river by completing the levee system and building an earthen wall along a 1,500-foot gap. This final levee would essentially cordon off the lucrative farmland in the floodway, protecting the crops from most floods. That's good for farmers west of the river, but maybe not so good for towns on the other side.

"[With] what we can produce in the floodway itself, in [those] 133,000 acres of farmland, we're able to feed on an annual basis about 1.3 million people," says Kevin Mainord, farmer and mayor of East Prairie, Mo. He says closing that gap is critical.

The levee system protects the farms most of the time, but every 75 years or so, a major flood slams the area. Then, the New Madrid Floodway has to be opened up and used as, well, a floodway.

That's what happened in the great flood of 2011. The floodwater was sweeping up to the edges of Cairo, Ill., a town of 2,800 with many low-income residents.

"We did everything imaginable to help people during that situation because it was awful," says Monica Smith, who works at the Cairo library. "People had to leave their homes that hadn't been out of their homes in years, and then some of them didn't have any place to go."

When the Army Corps planned to open up the floodway to help Cairo, the state of Missouri, backed by U.S. members of Congress, sued to stop the move. The state wanted to prevent damage to crops already planted. For two days, the floodwaters crept up on Cairo. Mayor Tyrone Coleman says after the town was evacuated, some stayed behind to fight the flood.

"We had to utilize inmates from the maximum [security] prison, Corps of Engineer personnel, National Guard, and then there were a number of local citizens that helped with sand bagging," he says.

After two intense and difficult days, Missouri lost the legal challenge and the Corps opened the floodway. But some say it was too little, too late. And after that flood, many residents never returned to Cairo. 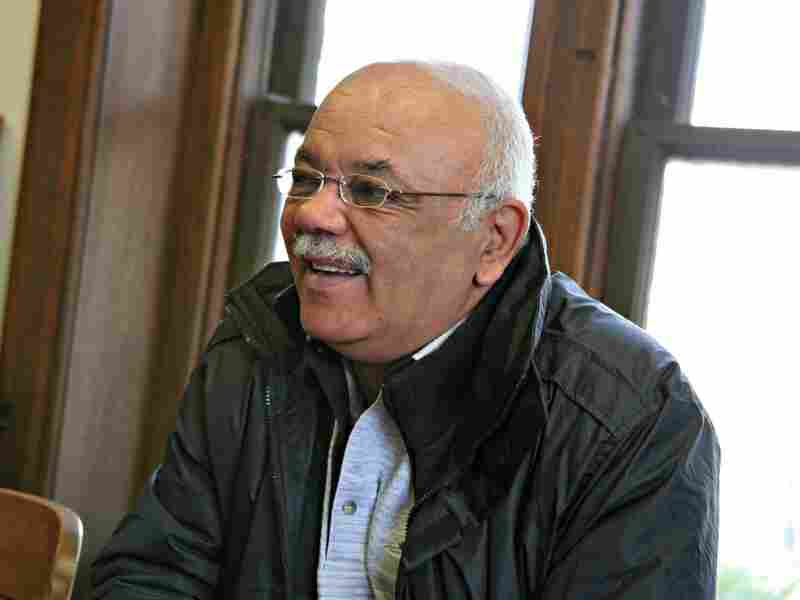 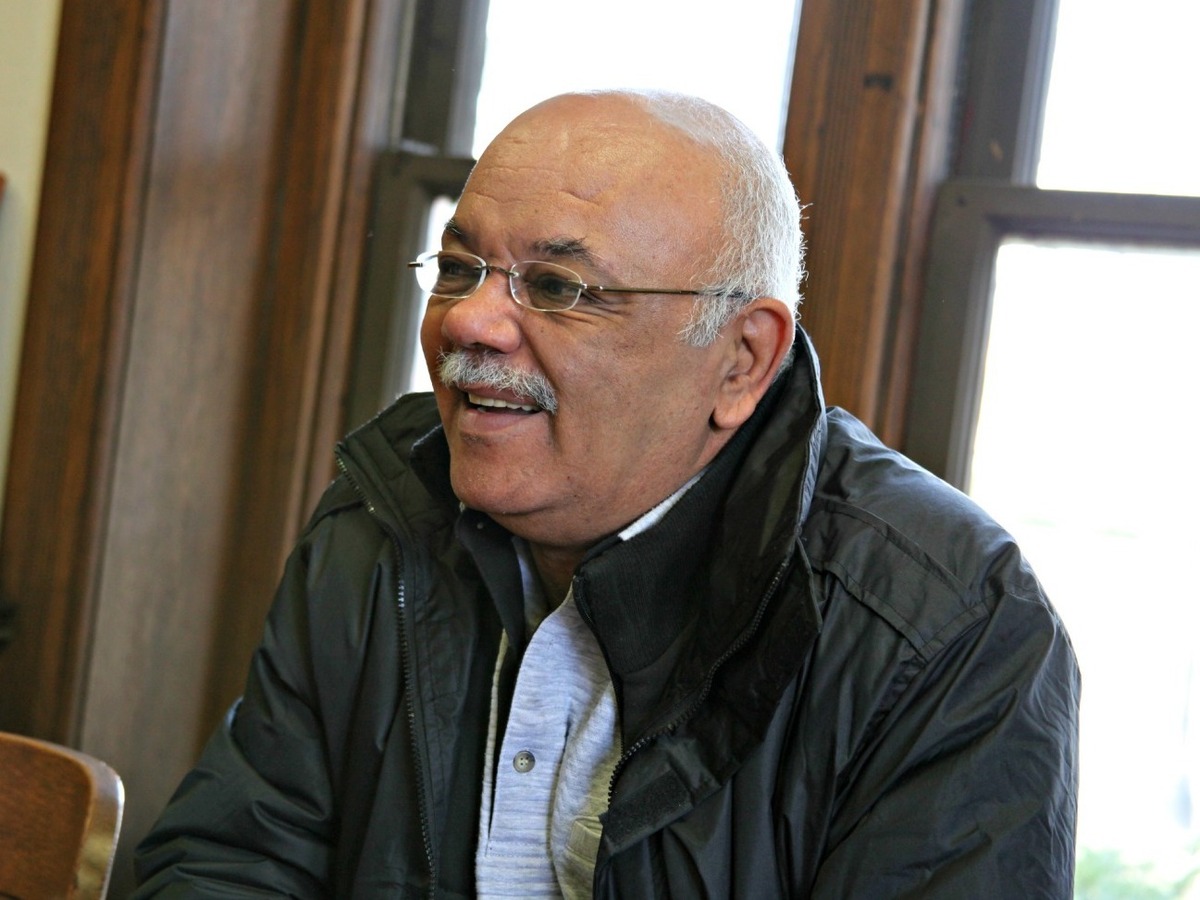 On the other side, with the floodway open, the water wiped away many of crops. Many of those residents never returned either.

"The floodway was destroyed — completely," Mainord says. "There are probably seven residents that are living there now , where there were hundreds before the flood of 2011."

Now, the Army Corps wants to close off the last part of the levee system, and that's pitting some deep-pocketed farm owners against less wealthy towns like Cairo. Environmental groups, like the National Wildlife Federation, are also fighting the project. They say cutting off the floodway with a plug would be catastrophic for the 50,000 acres of wetland that fish and waterfowl call home.

"We [sought] to balance the socioeconomic impacts associated with floods, as well as the environmental benefits derived from the flooding," he says.

The Corps says the new levee won't affect Cairo, and the floodway will still be used during historic floods. But Mayor Coleman, who had a front-row seat to the devastation in 2011, isn't buying it.

As a final play, Cairo has teamed up with other river towns and conservation groups to ask the Environmental Protection Agency to use part of the Clean Water Act to kill the entire project.

Sometime after March, the public will have a chance to comment on the project, after an independent panel reviews the Corps' most recent environmental impact statement.

This story comes to us from Harvest Public Media, a public radio reporting collaboration that focuses on agriculture and food production.