Accessibility links
A Detroit Opera Celebrates Frida Kahlo's Life And Cooking : The Salt The Michigan Opera Theater is mounting a production in March of Frida. The city's Mexican restaurants are getting involved by honoring the Mexican artist's recipes and cooking with special menus. 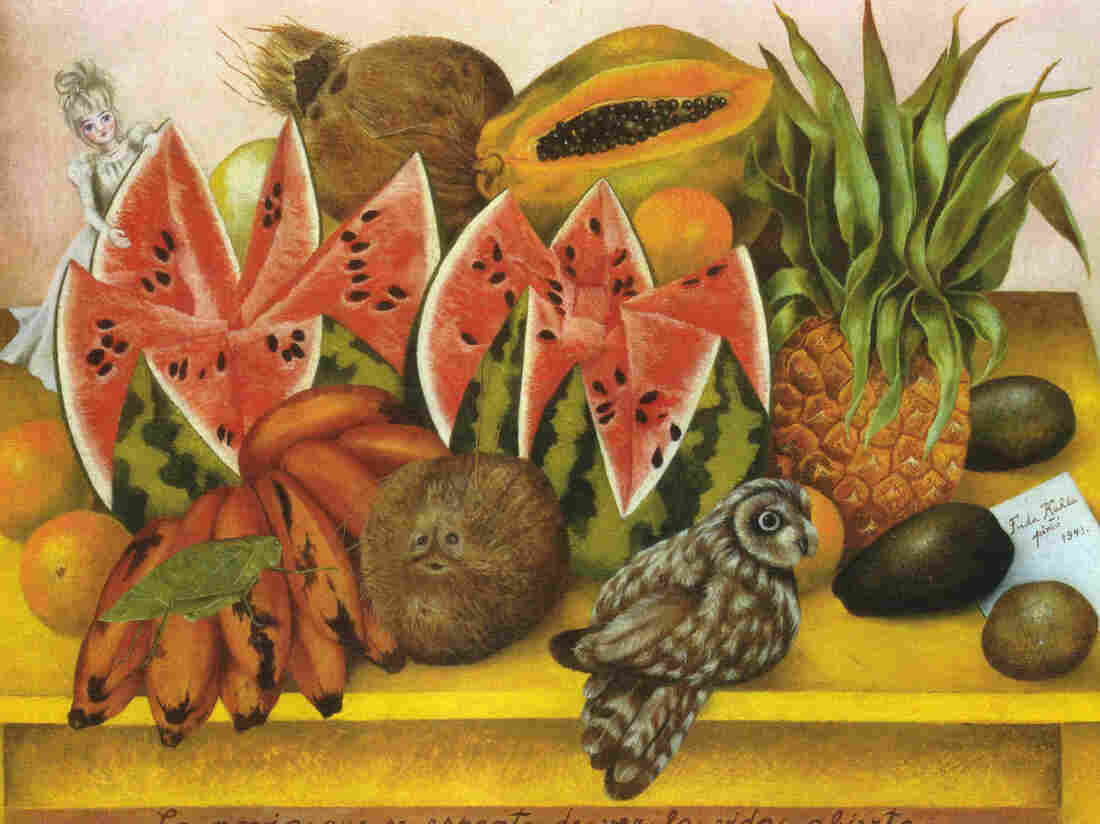 Frida Kahlo's passion for food was evident in her many still lifes of fruit, like this painting entitled "The Bride Frightened at Seeing Life Opened." She was also known for her raucous dinner parties in Mexico City. Wikiart hide caption 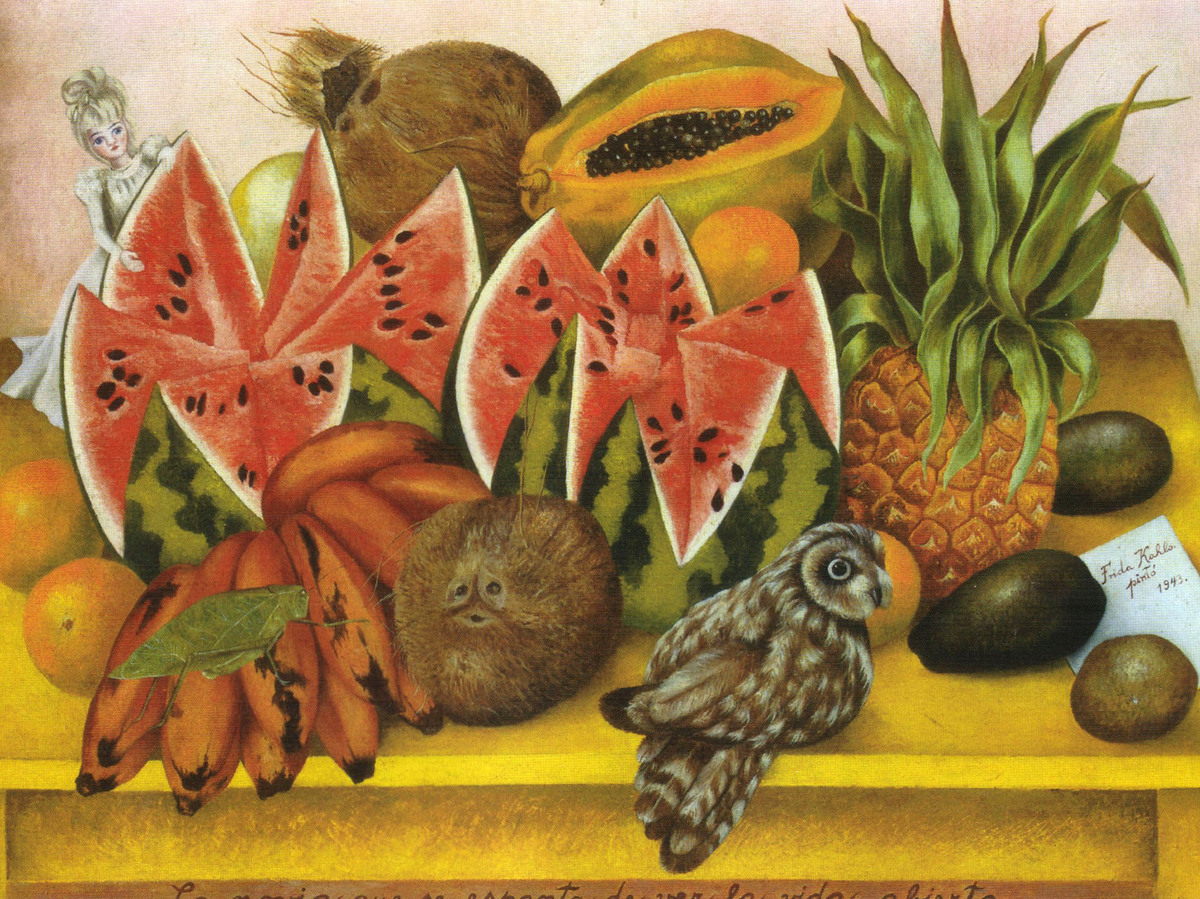 Frida Kahlo's passion for food was evident in her many still lifes of fruit, like this painting entitled "The Bride Frightened at Seeing Life Opened." She was also known for her raucous dinner parties in Mexico City.

The life of Frida Kahlo seems tailor-made for an opera: pain, love, art, travel and revolution. So the Michigan Opera Theater's decision to mount a production of the opera Frida, opening Mar. 7 in Detroit — where the iconic painter lived with her husband, Diego Rivera, for nearly a year, and where she survived a miscarriage that marked a turning point in her art — isn't so surprising.

But here's something that is: The opera is celebrating not only Kahlo's art and life, but her recipes and cooking, too.

Kahlo's passion for food was evident in her many lush, still lifes of fruit. But she was also known for her raucous dinner parties in Mexico City, replete with pulque, mescal, mole and tamales.

Kahlo served dishes she had mostly learned from Rivera's previous (second) wife, Guadalupe Marin. The meals were so central to the household that Kahlo's step-daughter, Guadalupe Rivera, published a book in 1994 with Clarkson Potter of family recipes called Frida's Fiestas. The book uses the meals to frame a memoir of time she spent living with Kahlo and Rivera as a college student.

And that was enough to spark an idea at the opera: Why not celebrate the production — and Kahlo — with Detroit's best Mexican chefs preparing special menus of the artist's most beloved dishes?

"We're really trying to tell the whole story of Frida," said Michael Yashinsky, who directs community engagement for the Michigan Opera Theater. "Part of that is seeing this portrait of her life in this opera, part of it is seeing the art she created at the Detroit Institute of Arts, and part of it is experiencing her through her food." 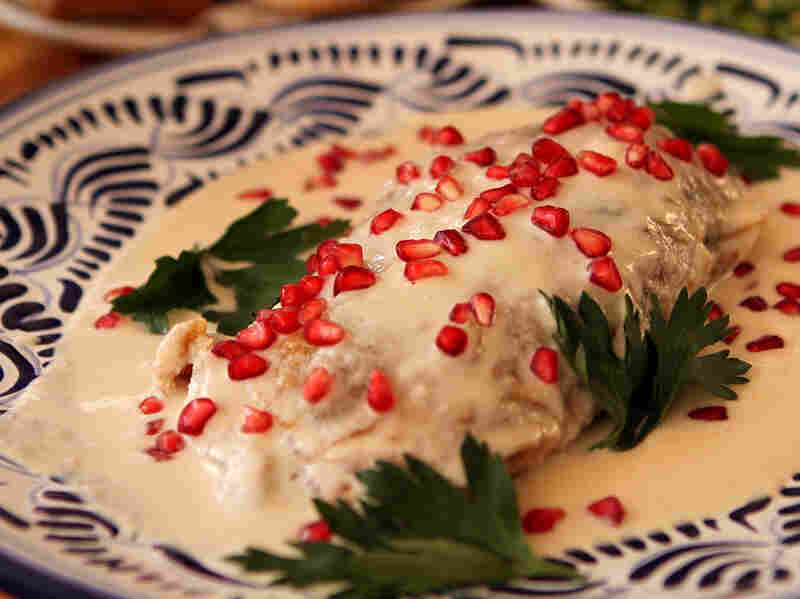 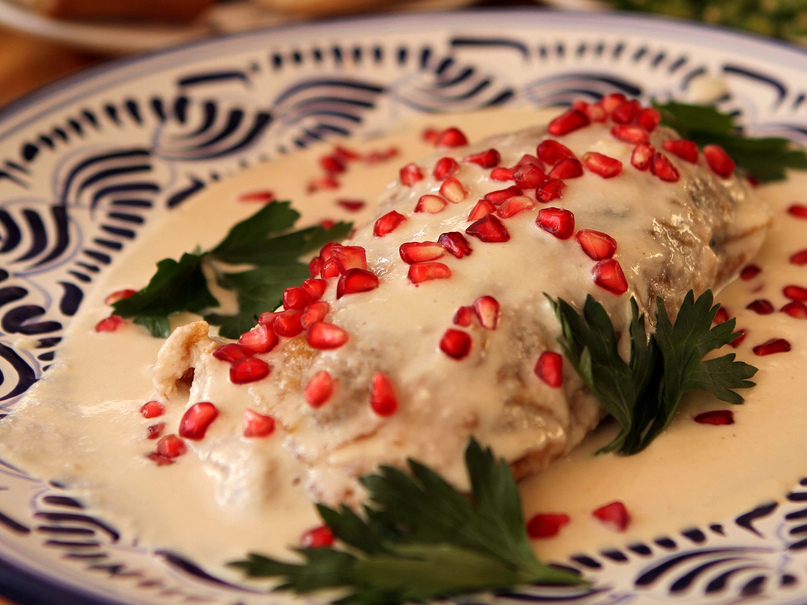 The opera partnered with three leading chefs in the city's Mexican enclave, Mexicantown, where Kahlo is rumored to have done her grocery shopping. The neighborhood first began attracting Mexican migrants working in Michigan agriculture around 1900. By the time Kahlo and Diego were in Detroit in 1932, the neighborhood housed groceries and shops stocked with dried chiles, fresh tortillas and piloncillo sugar. Today, Mexicantown draws artists as well as immigrants, and is home to supermarket taquerias and taco trucks as well as kitchens run by classically trained chefs.

One of those chefs is Israel Rocha of La Terraza, famous for its shellfish dishes. Drawing largely on Marin-Rivera's book, Rocha will focus in his special Frida opera menu on seafood and a rich posole stew with hominy and dried chiles.

Luis Garza of El Asador and Norberto Garita of El Barzón, the other two chefs involved with the Frida opera project, will meanwhile be serving moles: pork in yellow mole; mole negro Oaxaqueño, a chile and chocolate-based sauce traditionally served with turkey; and mole poblano, a reputed favorite of Diego Rivera. Other dishes will include an oyster soup served at Kahlo and Rivera's wedding; red snapper veracruzana with olives and capers; and chiles en nogadas stuffed with cheese or picadillo, a ground meat, nut and fruit filling.

Garza says his hope is that these dishes will help patrons become more familiar with the breadth and sophistication of Mexican cuisine. "Sometimes people come in [to my restaurant] and say, 'Can I have chimichangas?'" he says, pausing. "And I say, 'No.' I want to bring something different, besides rice and beans and tacos."

Garita shares that hope, but also sees a parallel between his work and that of the woman he is celebrating. "Going into the kitchen is something that you have to forget anything else; you just have to focus on your food. You have to love it," he says. "You have to have the passion, because this is an art, too."

Tracie McMillan is the author of The American Way of Eating, a New York Times bestseller, and a senior fellow at the Schuster Institute for Investigative Journalism at Brandeis University. You can follow her on Twitter @tmmcmillan.