Accessibility links
Alaska Farmer Turns Icy Patch Of Tundra Into A Breadbasket : The Salt Warmer temperatures in Alaska are giving farmers flexibility to plant a wider range of crops over a longer growing season. One farmer says the secret to his bounty is soil enriched by flooding rivers. 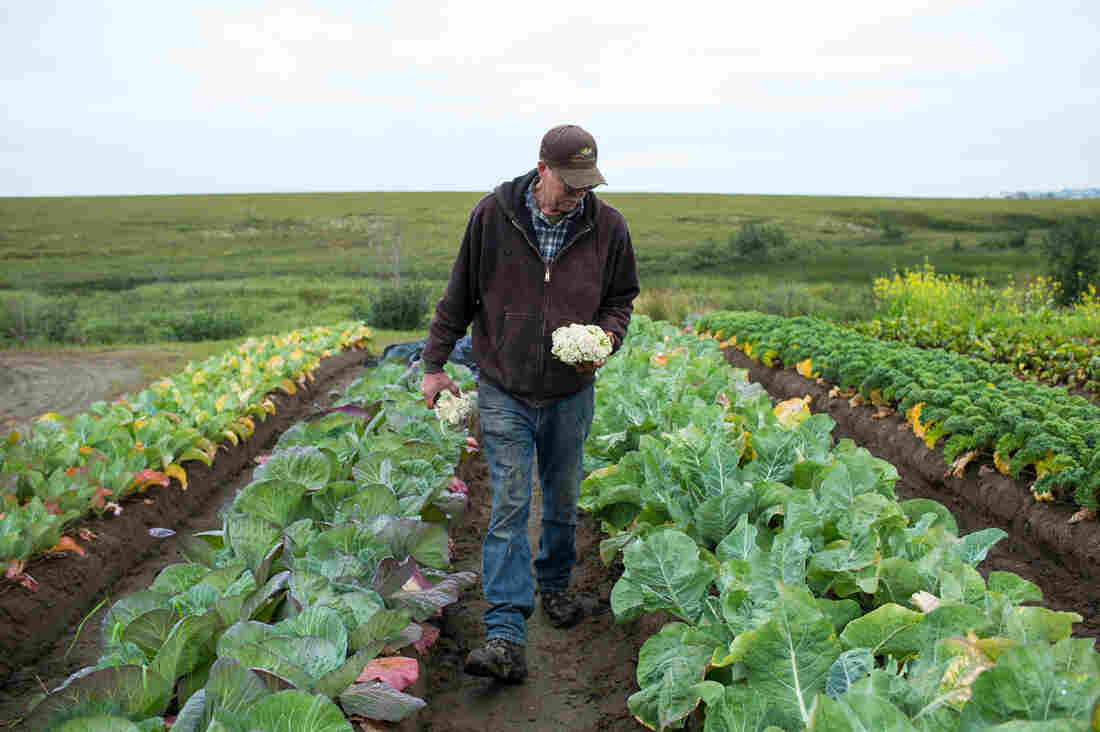 Tim Meyers on his four-acre vegetable farm in southwestern Alaska. Behind him: an endless sea of tundra, and a glimpse of the town of Bethel. Eugenie Frerichs for NPR hide caption 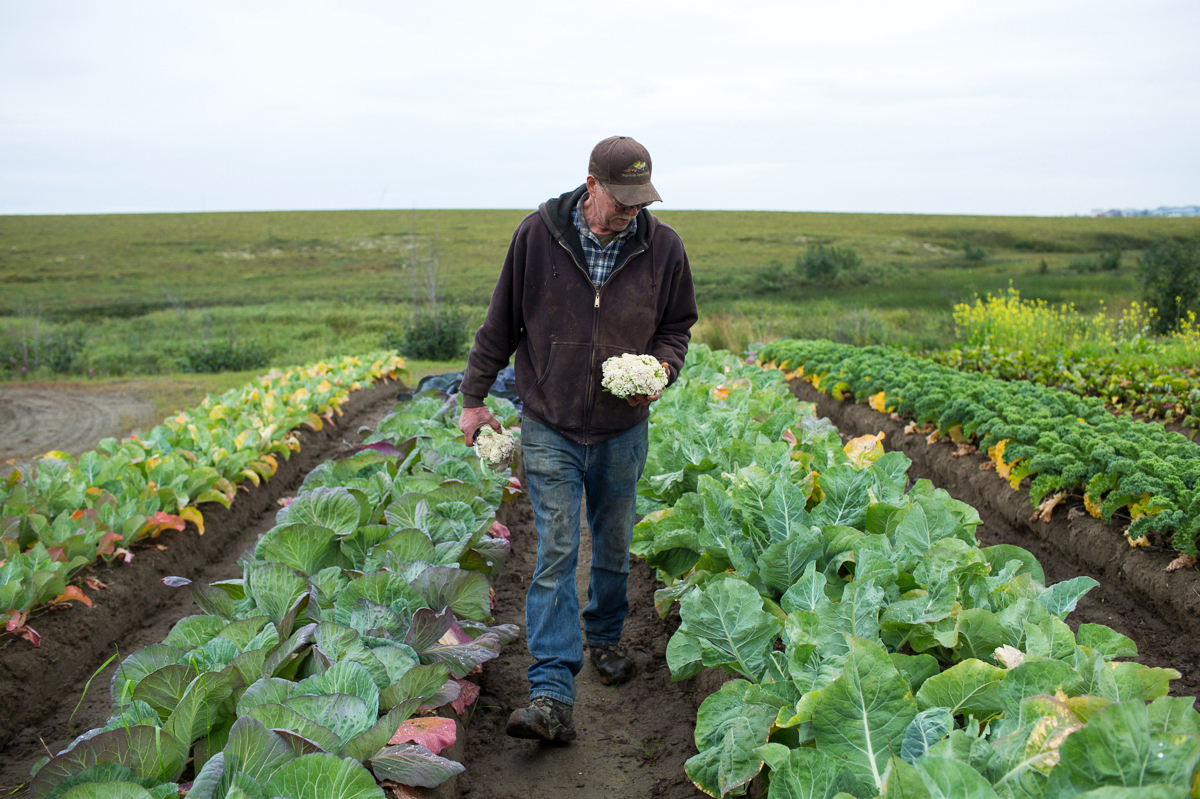 Tim Meyers on his four-acre vegetable farm in southwestern Alaska. Behind him: an endless sea of tundra, and a glimpse of the town of Bethel.

The Alaskan tundra might not seem like much of an agricultural hotspot, but one farmer in the frigid town of Bethel believes he's found America's newest breadbasket.

For the last 10 years, Tim Meyers has been coaxing an enviable quantity of fruits and veggies from just four acres of land. Last year, he produced 50,000 pounds of potatoes, beets, carrots and other vegetables. He sells it at his year-round biweekly market and to local grocery stores.

"I think we grow [a greater variety] here in this climate than most people can grow in the hot weather," says Meyers, who grew up in comparatively urban northern Wisconsin.

Meyers says warmer temperatures due to climate change in Alaska are giving him flexibility to plant more crops over a longer growing season. But the secret behind his yield, he says, is actually the soil.

Why Vegetables Get Freakish In The Land Of The Midnight Sun

The farm sits near the confluence of the Yukon and Kuskokwim rivers, large waterways that snake through Alaskan interior until they reach the Bering Sea. The rivers are fed by glacial silt rich in nutrients, says Steven Seefeldt, an extension agent for the University of Alaska in Fairbanks.

"When the river floods, it settles that," he says. "You get these wonderful lush and loamy soils that are just beautiful for farming."

But tapping that ultra-rich soil takes time. To prepare the land for farming, Meyers starts in June when the permafrost ground begins to melt a bit. He uses a tractor to clear the low-lying mossy lichen and other tundra plantlife that act as an insulator to keep the permafrost cold. Then, in July, he plows fields to loosen the soil and dislodge the remaining native plant roots.

In all, Meyers must spend as much as two years working a piece of land before he can plant it. And even then, the ground below the soil in which he farms is still ice.

Meyers' growing season starts in February; he begins by planting inside high tunnels — big, plastic dome-shaped buildings that keep out the wind and weather while letting in the sun. Then he plants his raised beds that he protects from the elements also with plastic coverings.

Leif Albertson, who worked for Meyers for three summers prior to his current post as a Bethel-based extension agent for the University of Alaska, says Meyers' farm is as magical as "Willy Wonka's chocolate factory. " Visitors can transport themselves from the tundra to the jungle just by stepping into one of Meyers' greenhouses. It could mean a difference of 40 degrees between the chilly tundra air and in the greenhouse.

Visitors do occasionally make the trek to Bethel, which is 400 miles outside of Anchorage on the state's west coast. They have to come by plane or barge, and most food comes in by mail.

That food, Meyers says, is reaching the end of its shelf life, and pales in comparison to his super-fresh offerings.

Meyers is far from the first to try his hand at farming in Alaska. Natives of the region, as well as Russian settlers and missionaries, have farmed here for hundreds of years. In fact, the long summer days in Alaska have helped yield some of the world's largest vegetables.

Bonnie Bradbury, a longtime Bethel resident, says years ago, the town's subsistence fishers would set up fish camps along the Kuskokwim River near Bethel. In those camps, they'd make small gardens.

The tradition had faded, but Meyers' farm has helped revive interest in growing food, she says. Now, community groups work with residents to help them set up their own gardens.

There has also been a big uptick in farming across the state of Alaska. At last count, Alaska had nearly 800 farms. That's a nearly 10 percent increase from five years prior, though most of the farms are nine acres or fewer.

"We're seeing quite a big increase of people getting involved in farming activities," says Amy Seitz, executive director of the Alaska Farm Bureau.

That's partly due to the warming climate, which is making more land easier to farm, Seefeldt says.

"We have a lot of really high-quality ag land up here," he says. "If we have more farmers, we could grow all the potatoes that Alaskans can eat right here."

But Albertson is more skeptical about the opportunities. He says that the high startup costs, the labor and land needed to farm on the tundra could make it difficult for others to replicate Meyers' success. Farming in this state is a labor of love, he says.

Meyers continues to have an eye toward expansion. He's inventing new farming tools he needs and looking for ways to increase his yield. And he says he couldn't imagine farming anywhere else.

"I just love having that 400-mile buffer zone away from everybody else," he says.
"We've got salmon in the river. We've got moose everywhere. And now we can grow our own food. It's just a great place to live."

Whitney Blair Wyckoff is a writer and editor in Washington, D.C.