Accessibility links
When Food Is Too Good To Waste, College Kids Pick Up The Scraps : The Salt Millions of tons of food are wasted on college campuses around the country, and students are noticing. Some of them are now rescuing food to make tasty meals for the needy and compost for gardens.

When Food Is Too Good To Waste, College Kids Pick Up The Scraps

When Food Is Too Good To Waste, College Kids Pick Up The Scraps 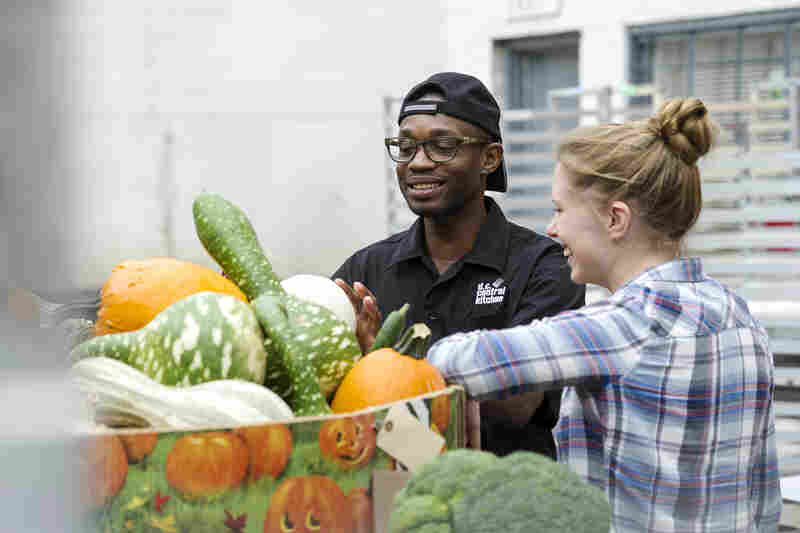 Student volunteers with The Campus Kitchens Project evaluate produce. The initiative gets high-school and college students to scavenge food from cafeterias, grocery stores and farmers' markets, cook it and deliver it to organizations serving low-income people in their communities. Courtesy of DC Central Kitchen hide caption 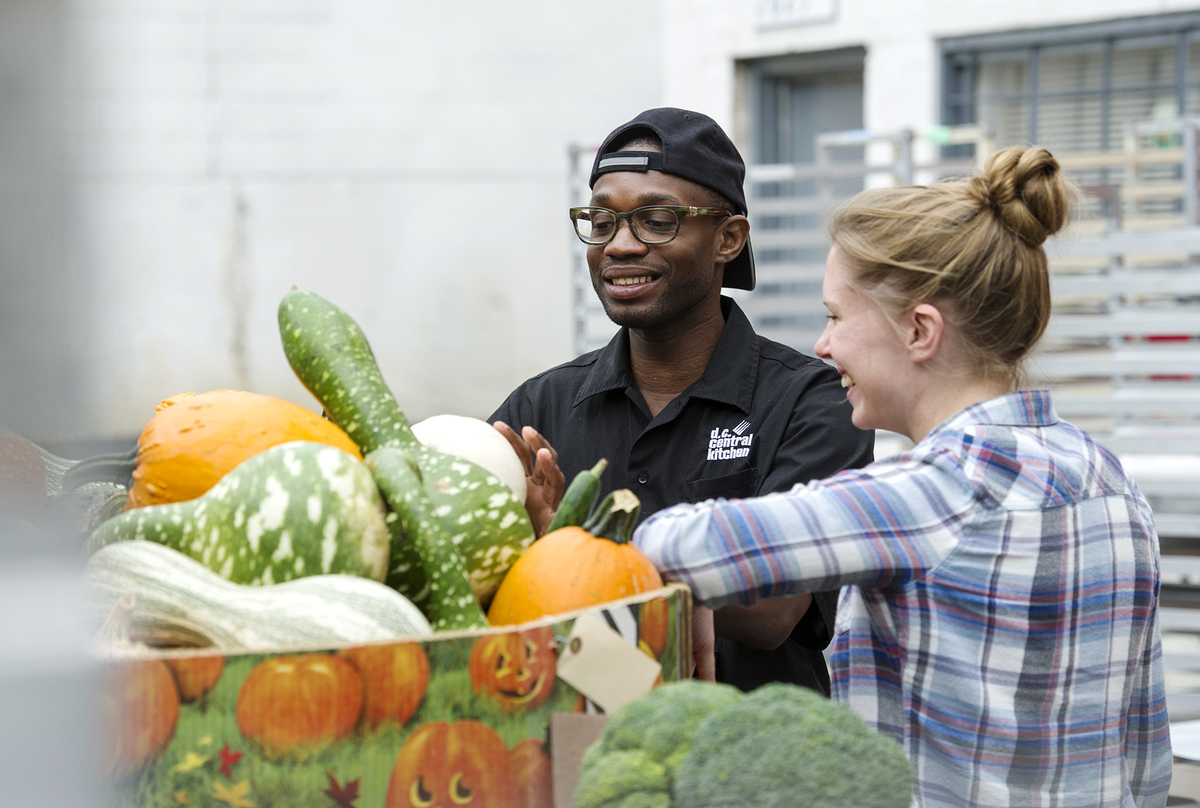 Student volunteers with The Campus Kitchens Project evaluate produce. The initiative gets high-school and college students to scavenge food from cafeterias, grocery stores and farmers' markets, cook it and deliver it to organizations serving low-income people in their communities.

Back in 2011 when I was a student at the University of Maryland in College Park I once noticed a massive pile of trash in front of a dining hall. A closer look revealed that it was mostly food — a half-eaten sandwich, a browning apple and what appeared to be the remains of the day's lunch special.

The heap was gross, but intriguing. Turned out it was a stunt to get students thinking about how much food they throw out each day.

Nowadays, students are coming face to face with their food waste, and its environmental and social impact, a lot more often. They also have more opportunities do something about it.

The conspirator behind the stinky installation at UMD was Ben Simon, 25. Simon founded the Food Recovery Network as an undergraduate as a way to get college kids to salvage uneaten food from cafeterias and deliver it to local agencies that feed the needy. He's been so successful with the initiative that he was recently highlighted on Forbes' "30 Under 30" list of entrepreneurs.

The average college student generates 142 pounds of food waste a year, according to Recycling Works, a program in Massachusetts. And college campuses as a group throw out a total of 22 million pounds of uneaten food each year, the Food Recovery Network has found. It's a small – but significant — piece of the 35 million tons of food discarded by Americans in 2012 alone, according to the latest estimate from the U.S. Environmental Protection Agency. About 40 percent of all food in the U.S. never even makes it to the plate before it's tossed. Yet 1 in 6 Americans goes hungry.

Sizing Down Food Waste: What's The Worst Thing To Toss?

Like many institutions with big food service operations, colleges and universities are forced to throw food away because they never know exactly how many people will be dining in their cafeterias every day. Many schools are serving meals buffet-style and can't run the risk of running out of food.

Simon says all the waste at the UMD began to resonate with him as a lost opportunity to feed the hungry — he was volunteering at soup kitchens and involved with food drives at the time. He discovered that only a handful of U.S. colleges had some sort of program to repurpose uneaten food. There was SPOON at Stanford University and the The Campus Kitchens Project, which had chapters in a few dozen schools.

"It just seemed like everywhere across the country, this surplus food from college campuses was just getting wasted," he tells The Salt.

So he got to work, initially with a group of 11 people. Soon 200 people from other student organizations on campus came to volunteer. Three years later, the program expanded to more than 100 chapters around the country. To date, students in the network have salvaged nearly 640,000 pounds of food, which they repackage and driven by students in their own cars to local agencies that feed the hungry.

Colleges and universities have also been coming up with their own ways to prevent food waste, says Wynn Calder, a sustainability consultant and the director of the Association of University Leaders for a Sustainable Future. "A lot of schools have done things like introduce trayless dining," he says. "A study at Loyola University Chicago found that a combination of getting rid of trays and reducing plate sizes makes about a 25 percent reduction in food waste."

Other tactics include offering fewer food choices and putting unhealthful food further in the back to make students take less at a time.

Simon says part of his inspiration came from The Campus Kitchens Project, which was started in 2001 by the nonprofit D.C. Central Kitchen and now has 42 chapters. Whereas Simon's organization rescues food that's already been cooked, The Campus Kitchens Project has high-school and college students scavenging food from cafeterias, grocery stores and farmers' markets, preparing it and delivering it to organizations serving low-income people in their communities.

"It's the students who come up with the recipes, who check the temperature of the food, who are trained in [food] safety and who are running the shifts as a chef would," says Jenny Bird, a coordinator for the The Campus Kitchens Project at the St. Louis University chapter. 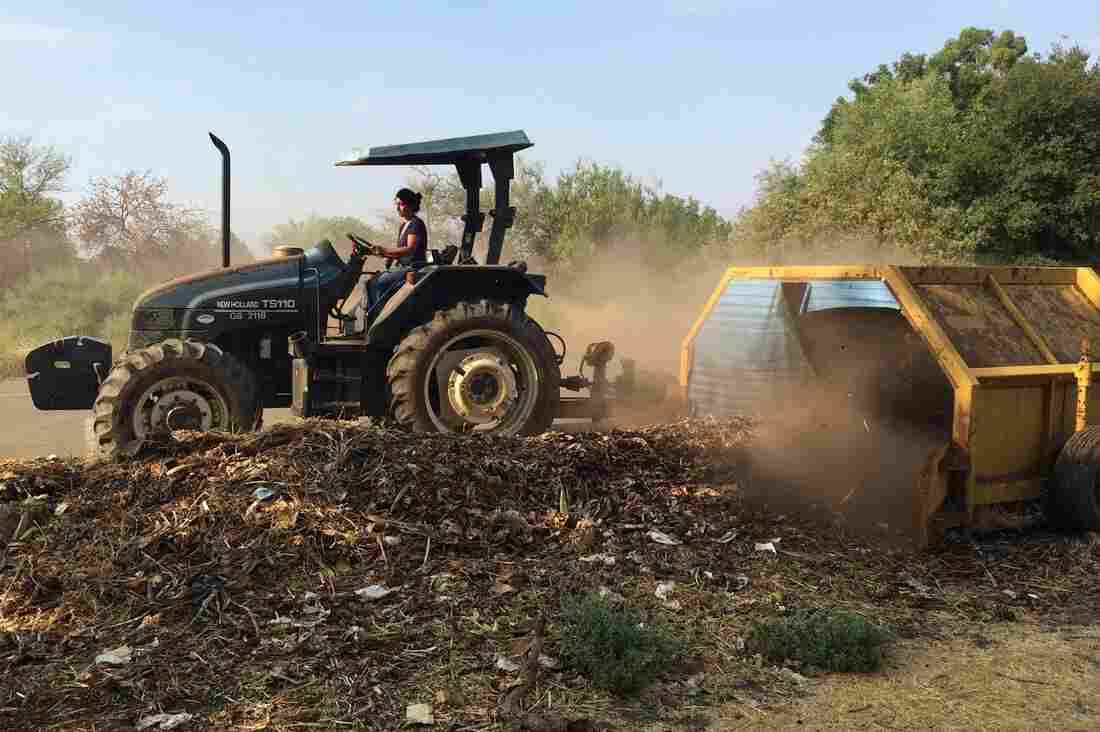 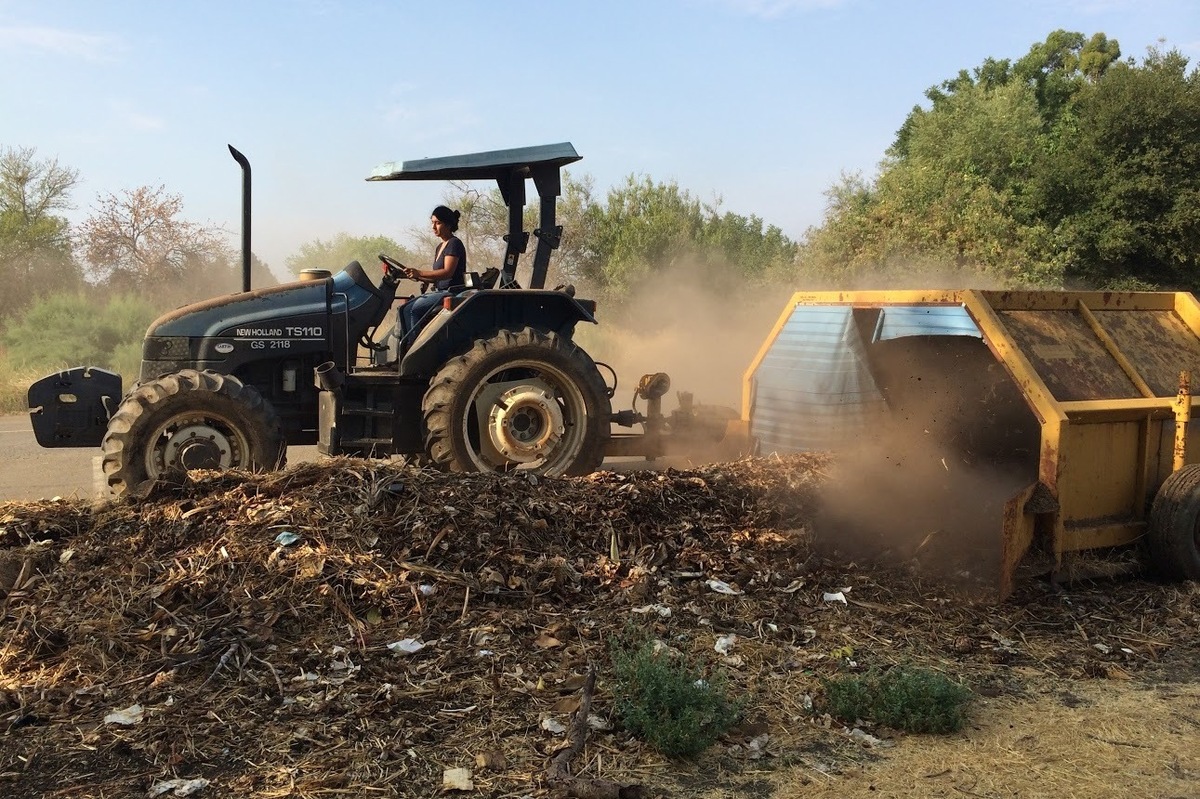 At University of California, Davis, students are focusing on food waste that can't be eaten but can be composted. Jessica Siegel, 21, is a senior who runs Project Compost. The student-led program collects nearly 2,000 pounds a week in carrot peels and coffee grounds from the school's main coffee house and from a plant lab. It all gets composted into a material that's donated to community gardens.

"You just see so much when you're behind the scenes digging at the waste, like how much waste is produced and how much of that can be used to make compost," says Siegel.

Wynn Calder at Association of University Leaders for a Sustainable Future says he's thrilled that students are getting involved with the food waste issue.

If anyone is going to reverse the trend of food waste, it's milennials, says Dana Gunders at the nonprofit Natural Resources Defense Council. "They care, they're just starting to form their food habits and they're opened to new things," she says. "And they're going to be eating food for longer than [older] generations.

What's really needed, she says, is a "paradigm shift in how we value food. And I think millennials are really poised to drive that."