Accessibility links
Tea Tuesdays: Kenyan Farmers See Green In The Color Purple : The Salt Kenya has spent 25 years developing a purple "supertea" with high levels of antioxidants. The hope is that the tea will appeal to health-minded consumers and revive the country's struggling industry. 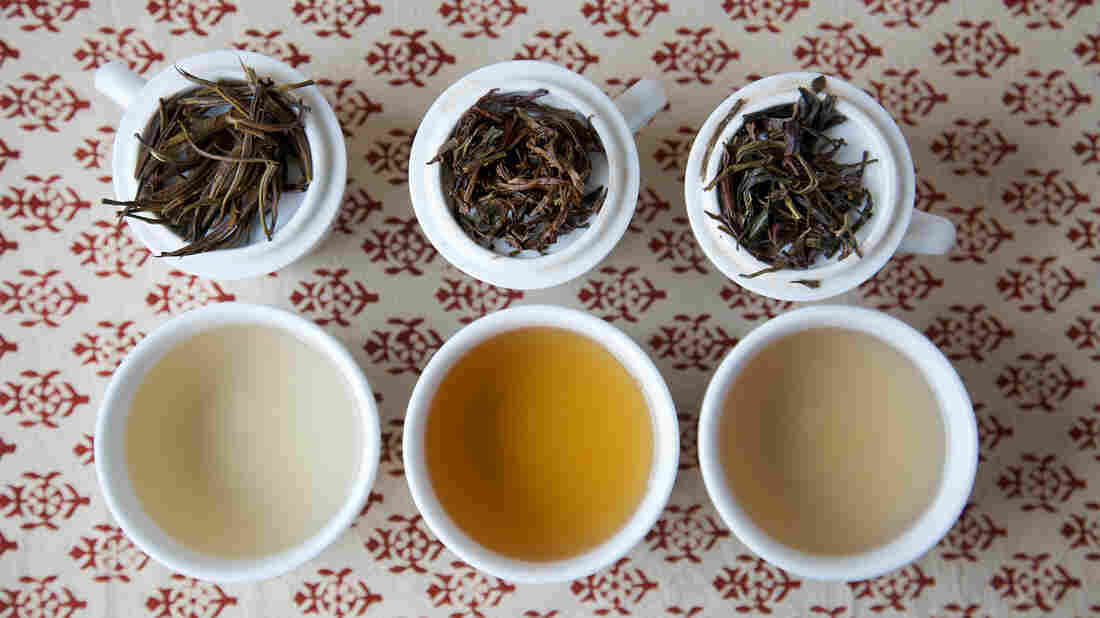 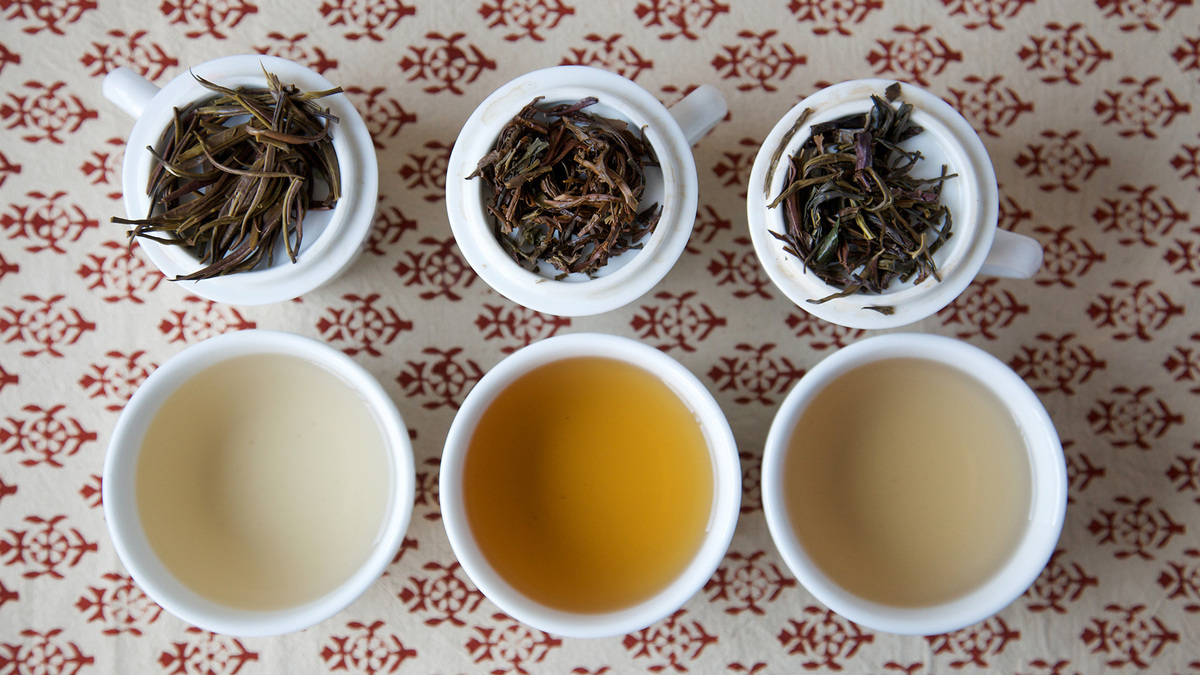 Across the picturesque highlands of Kenya's Great Rift Valley, fields of tea shimmer in shades of emerald, lime and moss under the equatorial sky.

Some of these fields, though, are now darkened with patches of purple. The purple comes from leaves with high levels of anthocyanins, natural pigments that also give cranberries, blueberries and grapes their color.

Tea Tuesdays is an occasional series on The Salt that explores the science, history, culture and economics of this ancient brewed beverage.

These purple leaves are Africa's newest — and most intriguing — tea.

At the moment, they are being made into a handful of different styles. The most popular, according to Alistair Rea, owner of the online retailer What-Cha, is a delightful hand-rolled oolong, a traditional Chinese tea. There's also a simple steamed green tea-style tea — the freshly plucked leaves that are steamed before rolling to stop any oxidation — and a subtle, high-end silver needle white tea with spiky, airy buds that have a fuzz of fine, silvery hairs.

Each tea carries grassy, plummy aromas, and its steeped liquor, with a slightly purple tinge to the color, has earthy flavors and undertones of berry sweetness.

Kenya is the world's third-largest producer of tea, and nearly all of the almost 1 billion pounds produced in 2014 were a brisk black tea processed by the cut-tear-curl, or CTC, method. Mainly exported in bulk, this tea goes largely into English breakfast, Earl Grey and other blends. 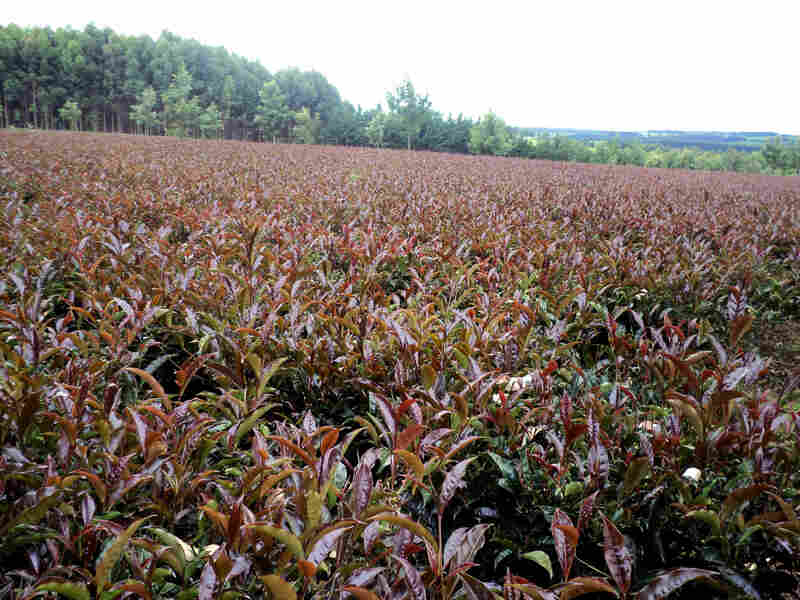 A field of purple tea growing in Kenya. Courtesy of the Tea Research Institute hide caption 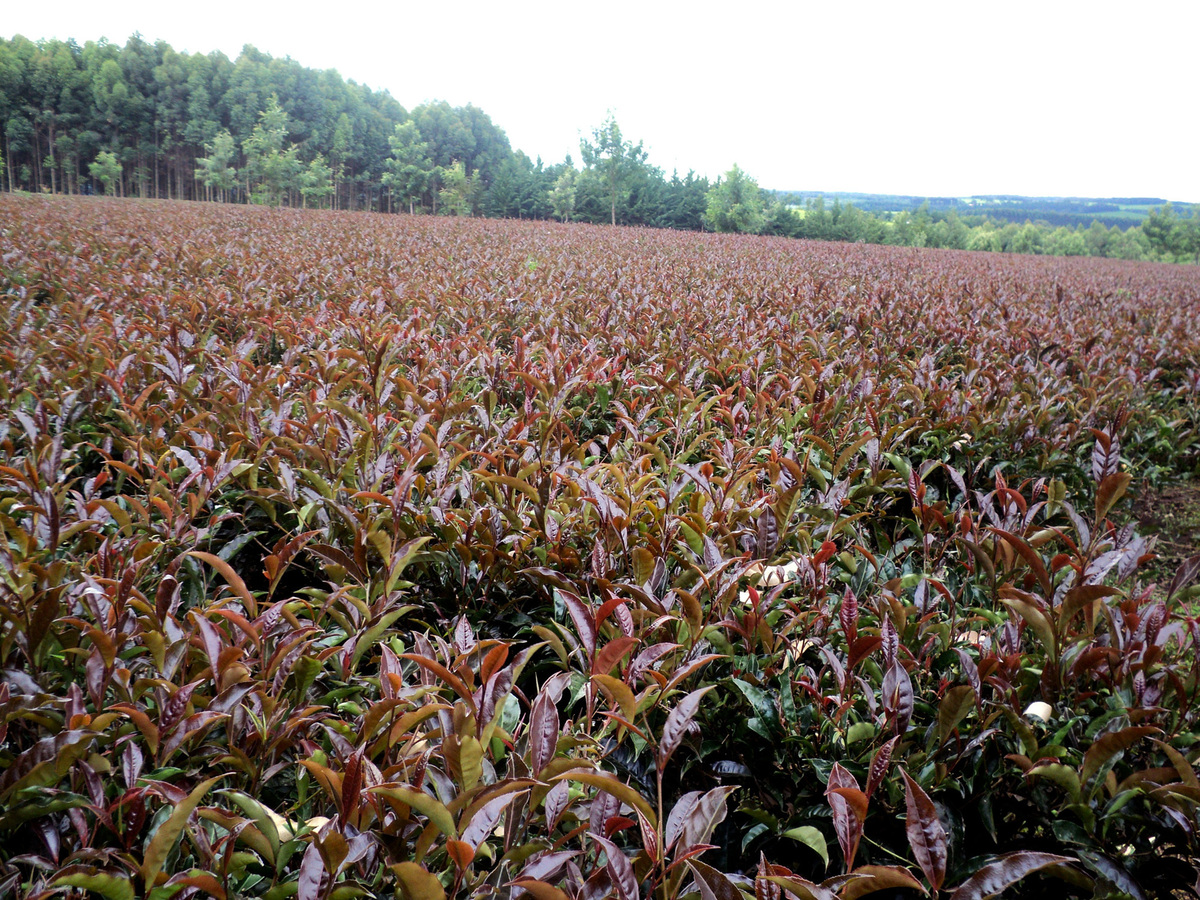 A field of purple tea growing in Kenya.

Courtesy of the Tea Research Institute

Kenya's industry is dominated by some 560,000 small farmers who bring their plucked leaves to the 60 or so factories run by the Kenya Tea Development Agency for processing. These account for about 60 percent of the country's production, with large-scale producers like Finlays and Unilever making up the remainder.

But the CTC market is saturated, global competition is stiff and auction prices are volatile. At the end of 2014, prices were down to near-historic lows as record harvests left a glut on the market.

As part of a long-term project to diversify the industry that accounts for over a quarter of the country's export earnings and directly or indirectly employs 4 million Kenyans, the state-run Tea Research Institute spent 25 years developing the purple variety, officially named TRFK 306.

Along with carrying those anthocyanin pigments, the new hybrid is high-yielding, contains properties to make it resistant to drought, frost, and certain natural pests, and has large leaves making hand-plucking easy, according to the Tea Research Institute. In July 2011, it was released for commercial production.

The first batches of Kenyan purple tea arrived at U.S. tea shops like Phoenix Tea in Burien, Wash., in 2012. While purple tea still isn't widely known or coveted, Phoenix co-owner Virginia "Cinnabar" Wright says that its quality makes it more than just a novelty. "[Our customers] try because they are interested," she tells The Salt. "Then they come back." 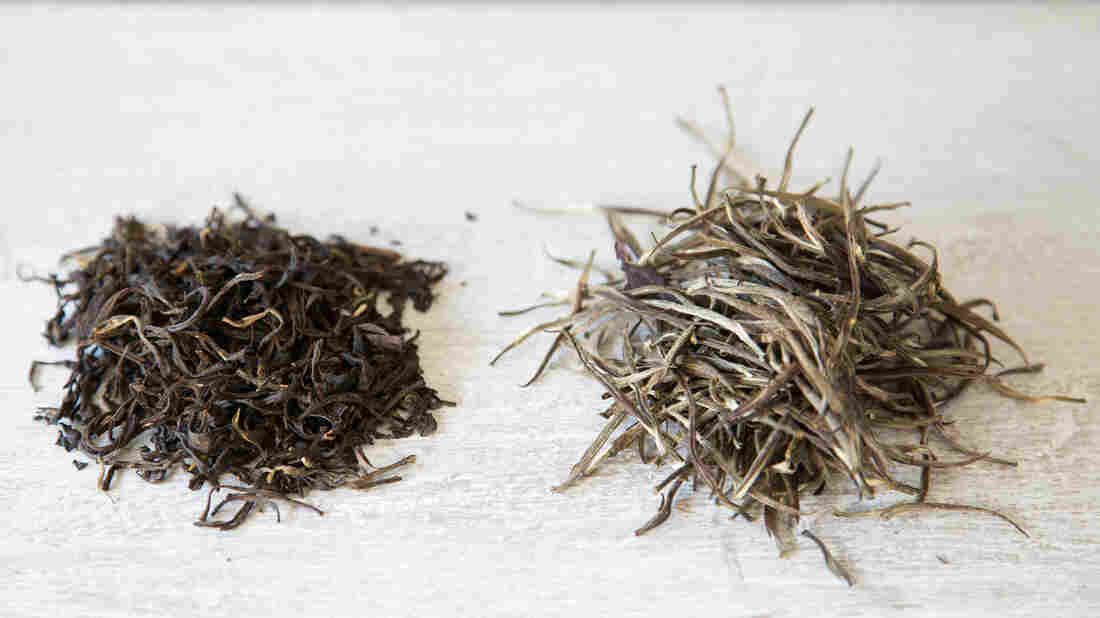 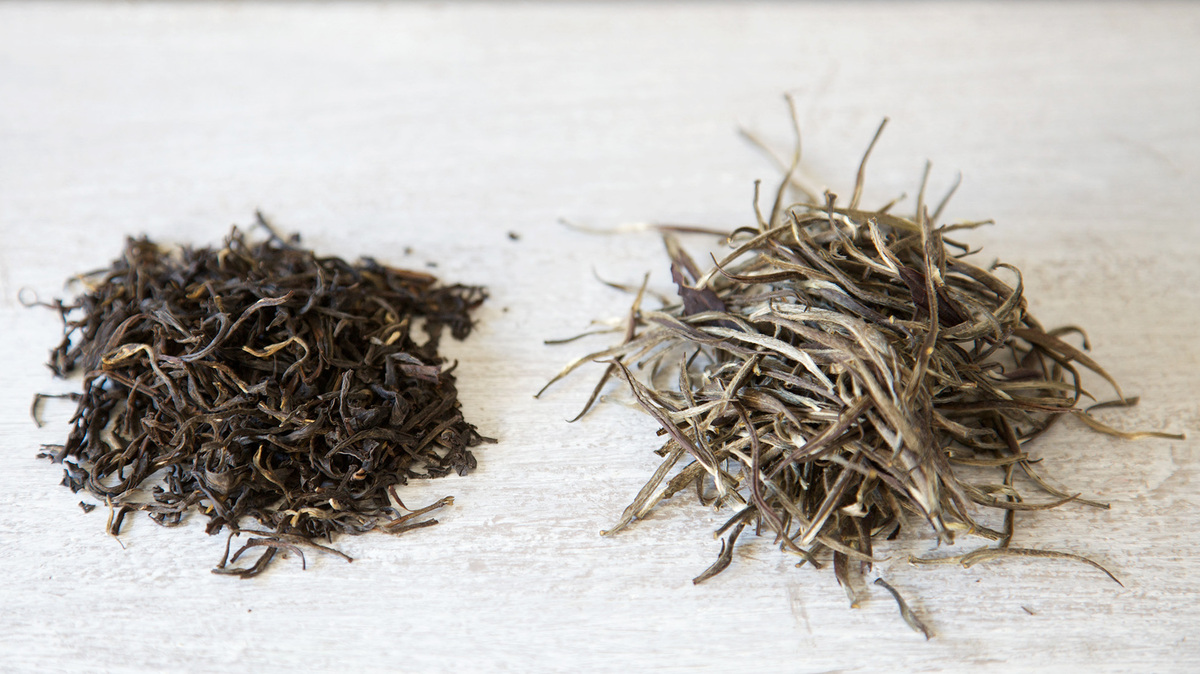 As pleasing as the unique flavors might be, TRFK 306 was never developed for its taste.

Instead, TRI breeders were most interested in creating "a high-value medicinal tea product." A number of scientific studies done inside and outside Kenya on purple tea suggest that its anthocyanins may help protect against neurodegenerative diseases and cancer.

Seduced by the potential of TRFK 306, many farmers ripped out their old bushes and replanted with the new varietal. But some are finding there is nowhere to take their leaves for processing.

At the moment, only one of KTDA's factories is able to handle the new leaves. But purple tea accounts for only a tiny fraction of the factory's annual output of 6.6 million pounds.

While farmers close to that factory can deliver their freshly plucked purple leaves there, growers elsewhere in Kenya are generally forced to have theirs processed along with standard black CTC tea.

That could soon change. The KTDA plans to set up smaller processing plants to handle the first crop of purple tea that farmers planted in 2011 that's now maturing.

Kenya's purple tea advocates say there may be other, perhaps better, ways of drawing out the leaves' riches. "Anthocyanins can also be extracted and purified for use in the food industry as colorants or stabilizers, [and in] the pharmaceutical and cosmetic industries," says Mbuthia.

Tea giant Finlays has planted some purple tea in its Kenya fields but is still trying to identify the market and its customers before releasing anything. "This is a new product and we do not yet know whether its value will be as a beverage in its own right, or as an ingredient, or as an extract," says Ashleigh Kahrl, group head of corporate communications for Finlays.

Kenya had better hurry, though, if it wants to take a firm hold on this potentially lucrative market.

At the end of December, Pradip Baruah, the principal scientist at India's Tocklai Tea Research Institute, said that wild purple tea bushes had been recently found growing in Assam and that region, in northeastern India, had tremendous potential for cultivating it.

This would be something of a reversal. Planters introduced tea to Kenya in 1903 with seeds from Assam and began to commercially plant the crop in 1924. "It's time we took a leaf out of Kenya's tea book," Baruah told the Kolkata-based Telegraph.

India produces 2 1/2 times more tea than Kenya. But more relevant is the industry's diverse styles of manufacturing, producing such refined, celebrated orthodox-style teas as Darjeeling. India has the means to kick-start a full-blown purple tea craze.

While you can't order a cup of purple tea at your local Teavana yet, you can get the leaves from select specialty tea shops and online retailers.

But don't be surprised to see it showing up in supermarkets in the near future, with the tea, or perhaps with the superfoods. Just call this one supertea.

Jeff Koehler is a freelance writer and author. His book Darjeeling: The Colorful History and Precarious Fate of the World's Greatest Tea will be published in May by Bloomsbury. You can follow him on Twitter: @koehlercooks