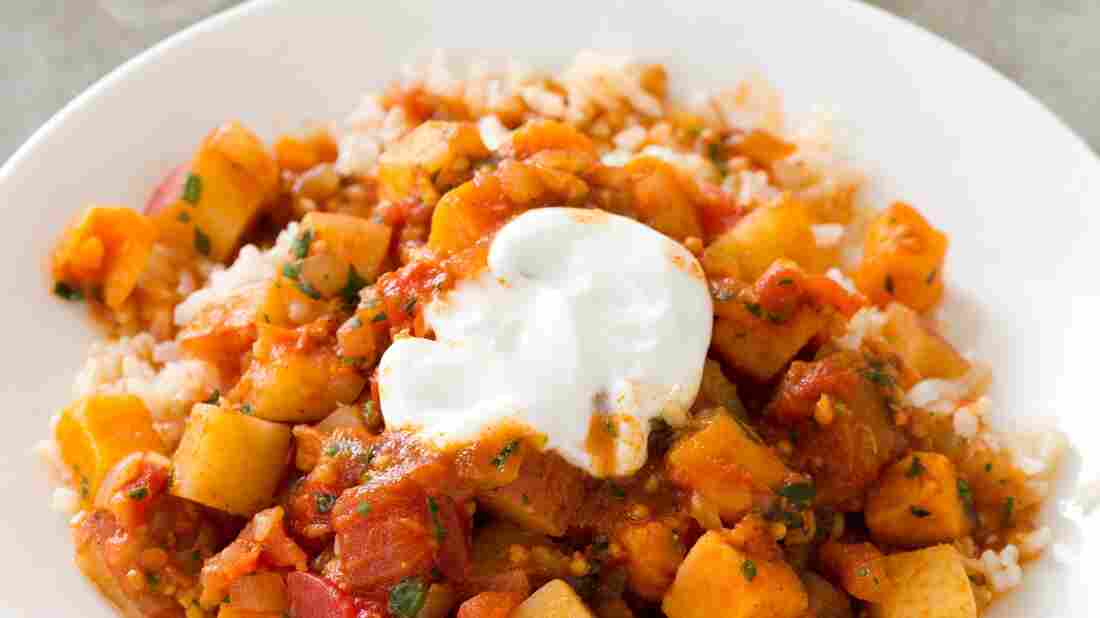 Tomato paste gives the Potato Vindaloo its "backbone," "structure" and "depth," says America's Test Kitchen's Jack Bishop. "'You probably wouldn't identify it in the finished dish, but leave it out and you would notice the difference." Joe Keller/Courtesy of America's Test Kitchen hide caption 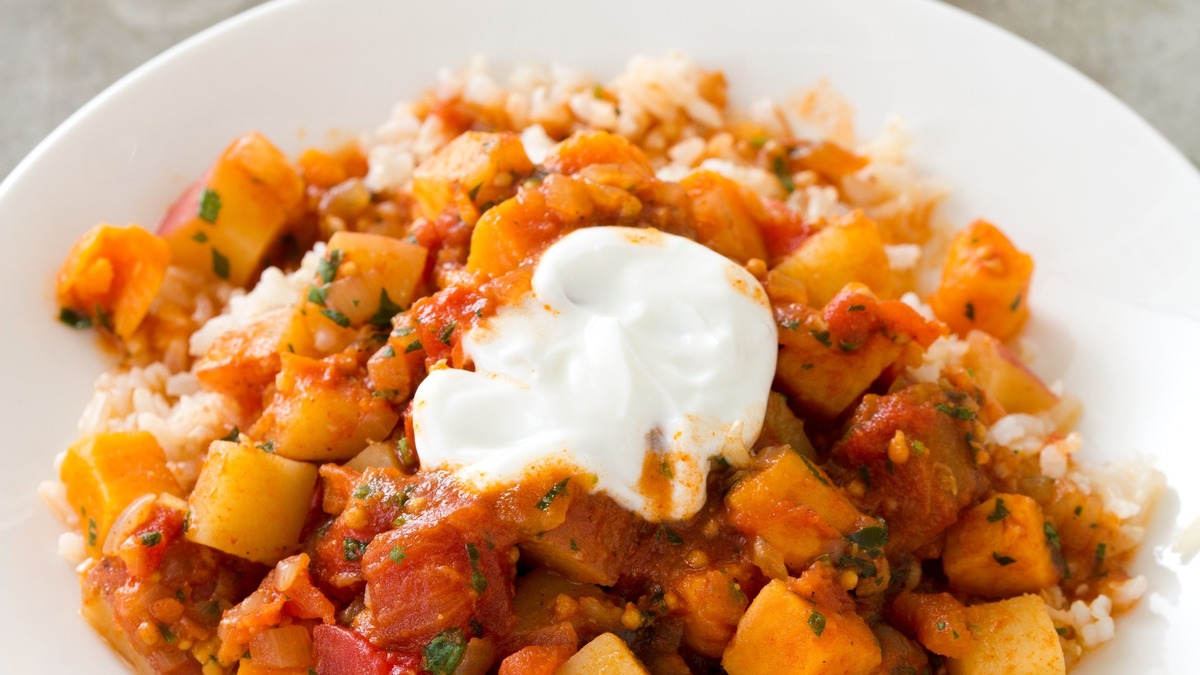 Tomato paste gives the Potato Vindaloo its "backbone," "structure" and "depth," says America's Test Kitchen's Jack Bishop. "'You probably wouldn't identify it in the finished dish, but leave it out and you would notice the difference."

Just because a meal is vegetarian doesn't mean it can't be "meaty." One trick to heighten the depth of flavors in plant-based dishes? Use ingredients that offer a pop of umami, say Bridget Lancaster and Jack Bishop of America's Test Kitchen, who have released the new cookbook The Complete Vegetarian Cookbook.

Umami (which means "delicious" or "yummy" in Japanese) is the name of the savory flavor in meat and fish — and it's recognized as one of the five tastes, along with sweet, salty, sour and bitter. Umami "incites our taste receptors on our tongue to kind of pick up that savory note from foods," Lancaster, the executive food editor of the Test Kitchen, tells Fresh Air's Terry Gross. 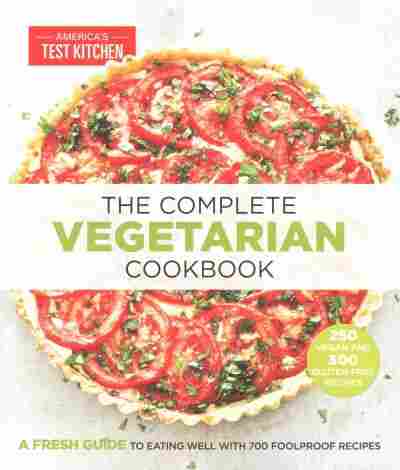 A Fresh Guide to Eating Well With 700 Foolproof Recipes

And umami isn't limited to meat. Mushrooms, tomatoes and soy sauce are foods that are high in glutamates, which are the natural compounds that stimulate our umami receptors.

"As a whole, a lot of vegetarian foods, especially a while back, were kind of one-dimensional," Lancaster asserts. "They were a little bit sweet or a little bit bitter. Especially our main courses in this cookbook really satisfy a lot of the flavors on our palate."

Bishop, the editorial director of the Test Kitchen, says a favorite recipe of his in the book is the mushroom Bolognese.

It's the soy sauce, he says, that makes the flavor snap.

"You would think, 'Soy sauce in an Italian recipe?'" he says. "It doesn't read as soy sauce in the final dish. But again, it's adding more depth than if you were to just add an equivalent amount of salt. ... If you add soy sauce, you get salt and you get the glutamates."

On using tomato paste to add structure to a vegetarian dish

Jack Bishop: I think a great example is an Indian curry. So [people tend to] think if there are no chunks of tomatoes, then there are no tomatoes in it. But often we'll add, after we've browned onions and garlic and if it's a curry, we've added some ginger — we might add a tablespoon or two of tomato paste and brown that briefly to bring out its flavor. ... Then you go ahead and you add the water, you can add the coconut milk, and there are no chunks of tomatoes, per se. I'm thinking of a recipe in the book with potatoes and cauliflower and peas and it's not a tomato curry ... but there is a tablespoon of tomato paste in there that's providing backbone, structure to the dish, and really, depth. And you probably wouldn't identify it in the finished dish, but leave it out and you would notice the difference.

Bridget Lancaster: Soy sauce is one of those ingredients that is also umami-packed. It has lots of those glutamates in it. It's kind of a power ingredient when you're talking about vegetarian cooking, very similar to mushrooms: You add a little bit and it's going to give that meaty, savory flavor. The surprising thing is that you don't have to just use it for stir-fry or other types of Asian dishes. We use it as a seasoning, so you can use it [in a] soup. ... We use it to season [vegetarian] meatballs, all sorts of things.

Lancaster: My very favorite cheese for cooking is Parmesan, for a few different reasons. And I'm talking about the real Parmesan that actually has a rind attached, not the green can attached. The really good Parmesan Reggiano has that crystalline texture. I think you get a lot of punch with a very little amount, so even though it's incredibly expensive, you actually don't have to use a lot to kind of make its presence known. But the best part of it is the rind — I have a whole bag of them in my freezer that I keep. I cut them up into 1- or 2-inch pieces ... and then any time I'm making a soup, whether it's vegetarian, like a bean soup, or not, I will throw in a Parmesan-cheese rind. If I'm making stock ... and it adds this meaty flavor to dishes itself and it gives a more satisfying feel to the soups. Then [I] fish it out before serving. 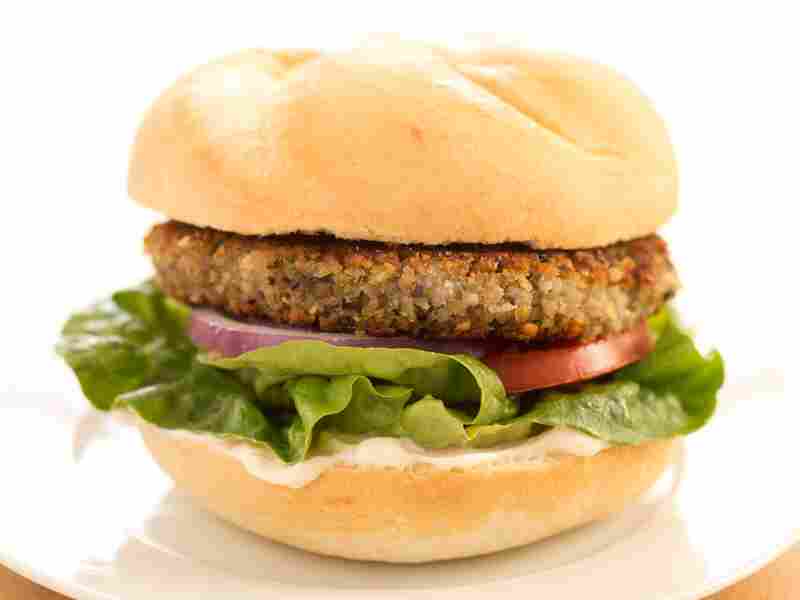 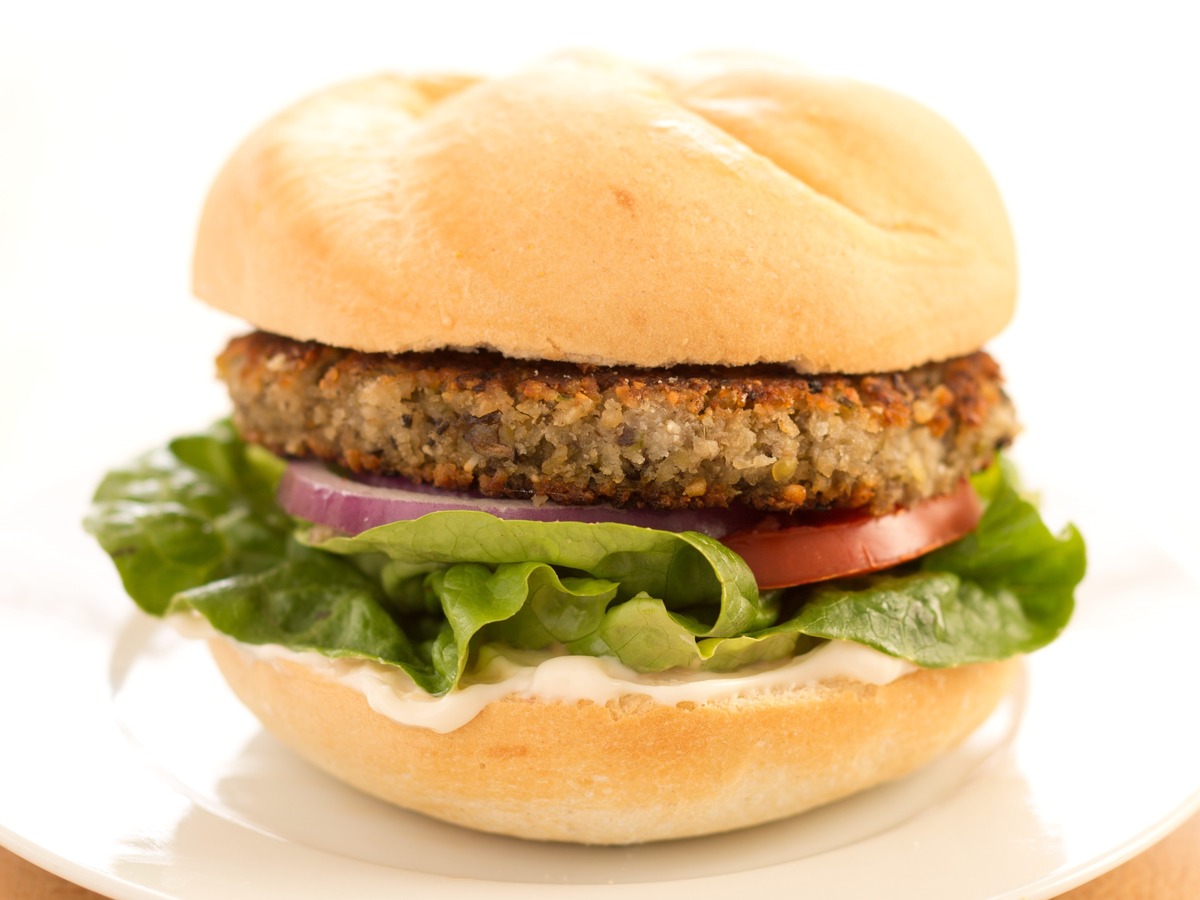 Bishop: The store-bought ones are not an advertisement for eating or making vegetarian burgers. They're just very sad. ... We developed about a half-dozen [veggie] burger recipes. My favorite contains pinto beans, beets and bulgur and it's got such great flavor. And what I really love is the texture. So bulgur is a type of wheat, it cooks really, really quickly and it gives it kind of that nubby [texture], whether it's a turkey burger or a beef burger. ... The shredded raw beets, they add a little bit of creaminess to it; they add some sweetness to it; they add some nice flavor. ... There's a little bit of ground walnuts, which again, adds some savory notes. ... And then the best part is you serve them with sriracha mayonnaise. 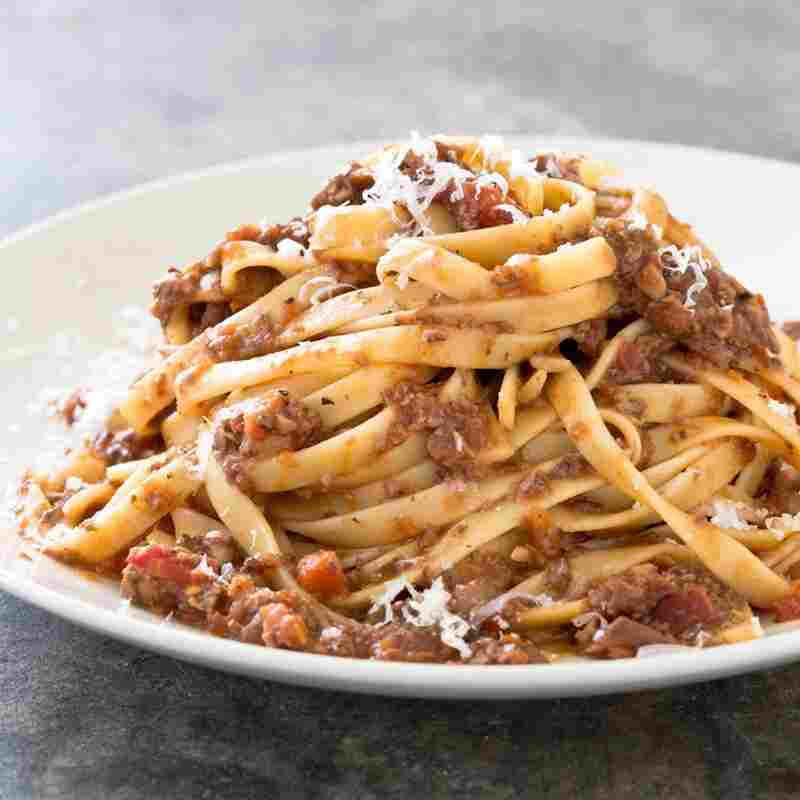 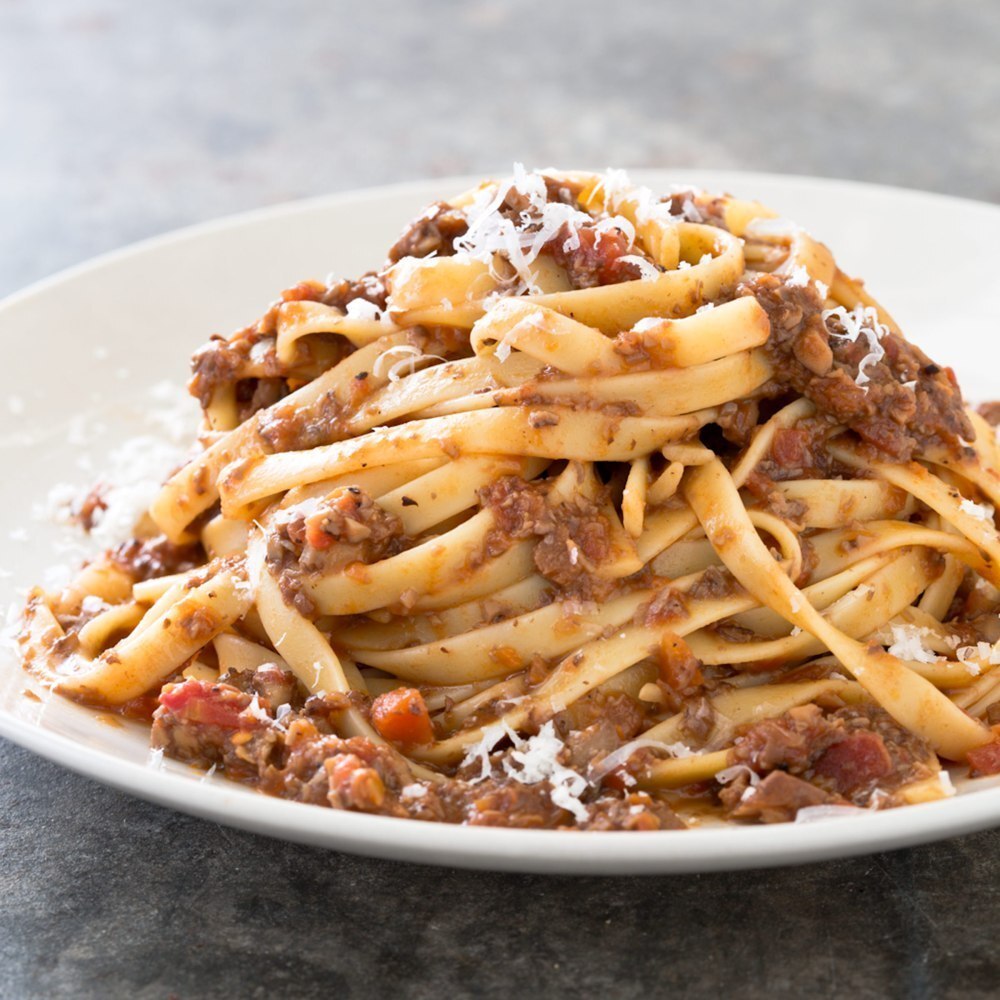 Jack Bishop says it's the soy sauce in the Mushroom Bolognese that really makes it pop.

Why This Recipe Works: We wanted to create a vegetarian pasta sauce that mimicked the rich, long-cooked flavor and hearty texture of Bolognese. Traditional Bolognese sauce gets its rich flavor from a combination of several types of meat, so we turned to two types of mushrooms to replicate that complexity: Dried porcini delivered depth of flavor, while 2 pounds of fresh cremini gave the sauce a satisfying, substantial texture. To further round out the sauce's savory flavor, we added two umami-rich ingredients: soy sauce and tomato paste. To make prep easy, we used the food processor both to chop the cremini roughly and then to finely chop the onion and carrot. Pulsing whole canned tomatoes in the food processor allowed us to get just the right texture. We also used red wine to lend richness and depth and a little sugar for some balancing sweetness. A dash of heavy cream at the end rounded out the sauce and gave it a decadent silkiness. Cremini mushrooms are also known as baby bella ­mushrooms.

2. Melt butter in Dutch oven over medium heat. Add processed vegetables and porcini mushrooms, cover, and cook, stirring occasionally, until they release their liquid, about 5 minutes. Uncover, increase heat to medium-high, and cook until liquid has evaporated and vegetables begin to brown, 12 to 15 minutes.

3. Stir in garlic and sugar and cook until fragrant, about 30 seconds. Stir in tomato paste and cook for 1 minute. Stir in wine and simmer until nearly evaporated, about 5 minutes.

4. Stir in processed tomatoes, vegetable broth, soy sauce, 1/2 teaspoon salt, and 1/4 teaspoon pepper, and bring to simmer. Reduce heat to medium-low and simmer until sauce has thickened but is still moist, 8 to 10 minutes. Off heat, stir in cream.

5. Meanwhile, bring 4 quarts water to boil in large pot. Add pasta and 1 tablespoon salt and cook, stirring often, until al dente. Reserve 1/2 cup cooking water, then drain pasta and return it to pot. Add sauce and toss to combine. Season with salt and pepper to taste, and adjust consistency with reserved cooking water as needed. Serve with Parmesan.

Why This Recipe Works: Vindaloo is a complex, spicy dish that blends Portuguese and Indian cuisines into a potent braise featuring warm spices, chiles, wine vinegar, tomatoes, onions, garlic and mustard seeds. We set out to translate its comfort food appeal into a hearty vegetarian version. Centering our dish around potatoes seemed right, as it required low and slow cooking to develop complex flavors, and a combination of red and sweet potatoes elevated our stew's flavor even further. However, after 45 minutes of simmering, the potatoes still weren't fully cooked. A second look at our ingredients showed us why: The acidic environment created by the ­tomatoes and vinegar was preventing our potatoes from becoming tender. To test our theory, we whipped up another batch, this time leaving out the tomatoes and vinegar until the end, cooking them just enough to mellow their flavors. Sure enough, after just 15 minutes, our potatoes were perfectly tender. To give our vindaloo exceptionally deep flavor, we used a mix of Indian spices plus bay leaves and mustard seed, and simmered them with the potatoes, which soaked up the flavors as they cooked. Serve over rice with a dollop of yogurt.

1. Heat oil in Dutch oven over medium heat until shimmering. Add onions, red potatoes, sweet potatoes, and 1/2 teaspoon salt and cook, stirring occasionally, until onions are softened and potatoes begin to soften at edges, 10 to 12 minutes.

2. Stir in garlic, paprika, cumin, cardamom, cayenne and cloves and cook until fragrant and vegetables are well-coated, about 2 minutes. Gradually stir in water, scraping up any browned bits. Stir in bay leaves, mustard seeds, and 1 teaspoon salt and bring to simmer. Cover, reduce heat to medium-low, and cook until potatoes are tender, 15 to 20 minutes.

3. Stir in tomatoes and their juice and vinegar and continue to simmer, uncovered, until flavors are blended and sauce has thickened slightly, about 15 minutes. Discard bay leaves, stir in cilantro, and season with salt and pepper to taste. Serve.