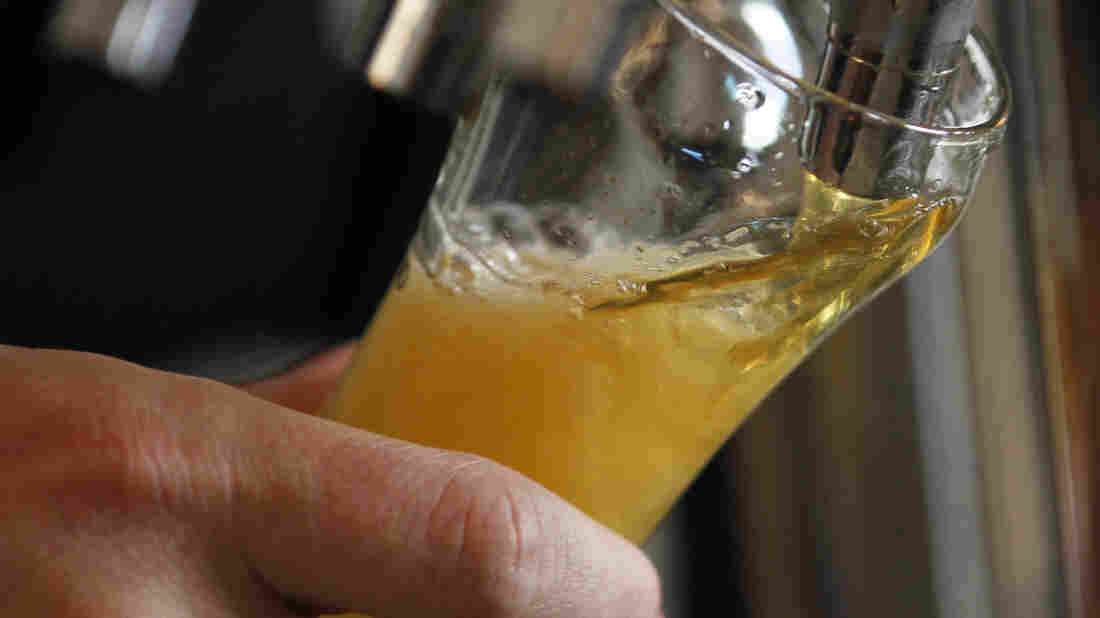 Brewers pay a federal tax on each barrel of beer they produce. Two proposals on Capitol Hill would lower that tax for small brewers, but not everyone's on board. Steve Helber/AP hide caption 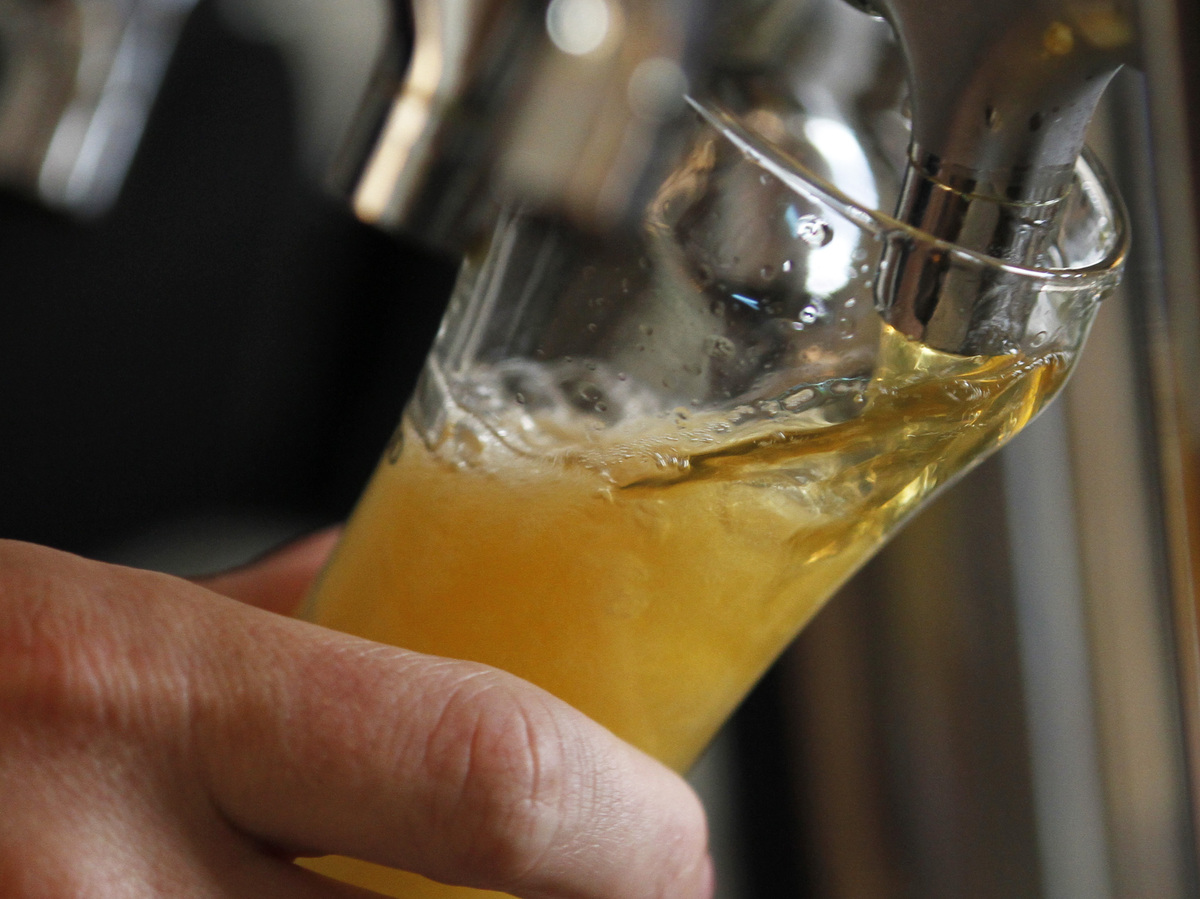 Brewers pay a federal tax on each barrel of beer they produce. Two proposals on Capitol Hill would lower that tax for small brewers, but not everyone's on board.

Congressman Patrick McHenry is a man who knows his beer. The refrigerator in his Capitol Hill office is filled to the brim with it. The Republican's district includes the city of Asheville, N.C., which claims it has more breweries per capita than any other U.S. city.

"Brewers in my district are about not only about the sort of art of brewing, they're about jobs," he tells NPR over a few North Carolina beers. "So these are small business folks that are risk-takers, that are trying to take their art and make a living out of it. It's a pretty cool thing."

Small beer is big business, not just in McHenry's district, but around the country.

"There are more craft breweries now than I think there were pre-Prohibition. We are a thriving and growing industry — 110,000 people across roughly 3,200 breweries across the country," says Mari Rodela. She heads up the D.C. Brewers' Guild and is the chief community and culture officer at D.C. Brau, which opened in 2009.

There's even a Small Brewers Caucus in the House, which counted 142 members among its ranks as of last month, and a counterpart in the Senate. And its members have been busy. They're pushing a bill that they say would cut taxes on beer and make it easier for small breweries to hire more workers and brew more beer.

"It's simply for the smallest brewers in the country and actually cutting in half their excise tax for the first 60,000 barrels, and then a lower rate until they reach two million barrels," McHenry, the vice-chairman of the House Small Brewers Caucus, explains.

Small beer makers say that could make a big difference.

Thor Cheston launched Right Proper Brewing Company in D.C. in December 2013. He and his team want to expand and open a production facility that will allow them to produce 10 times more beer. They hope to open it in May.

"There's a lot of stress involved. We have 14,000 pounds of stainless steel arriving in two days," Cheston says. "It's a lot of fun though. That's really the best part. You wake up in the morning and think, 'Oh my God, I actually do this for a living.' "

But like any small business, there are challenges. And for small brewers one of the biggest challenges comes in the form of something called the federal excise tax.

Here's how it works. Brewers pay a federal tax on each barrel of beer they produce. Currently small breweries that produce less than 2 million barrels of beer each year pay $7 on their first 60,000 barrels. For each barrel more than 60,000 they pay $18. 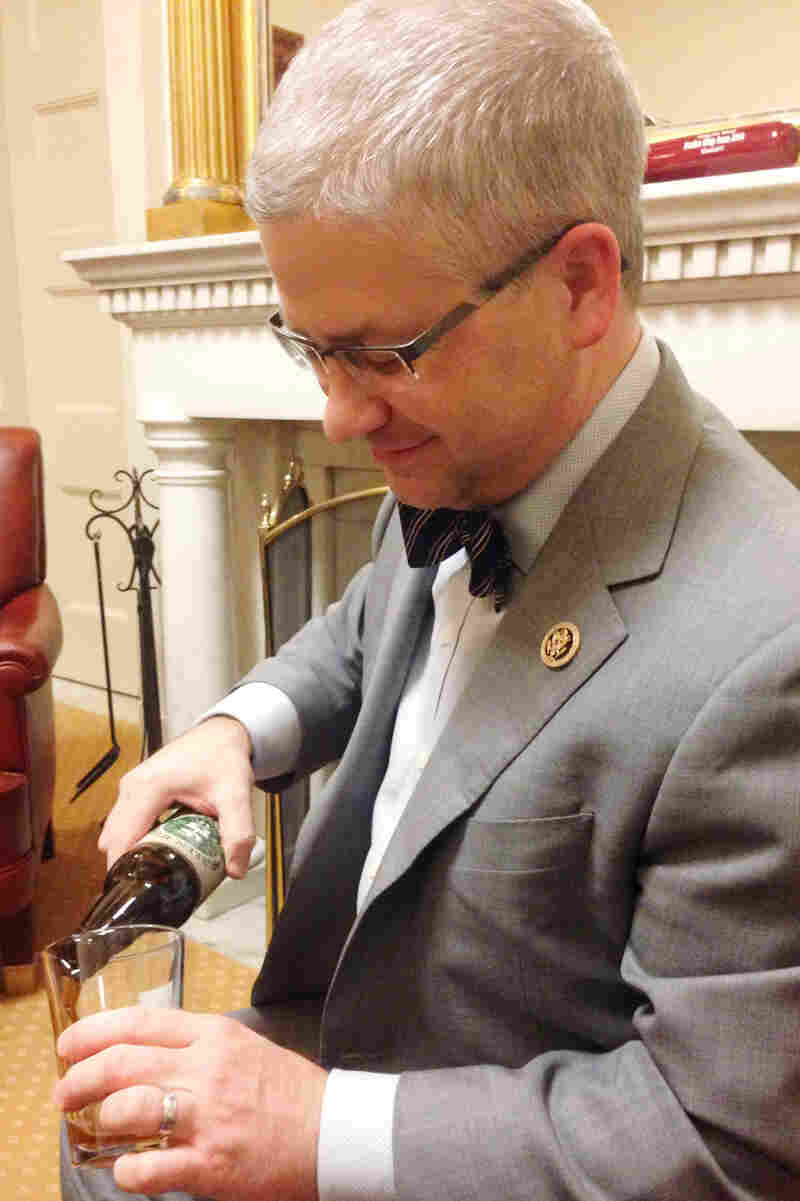 "Brewers in my district are about not only about the sort of art of brewing, they're about jobs," says Rep. Patrick McHenry, seen pouring a beer in his Capitol Hill office. Amita Kelly/NPR hide caption 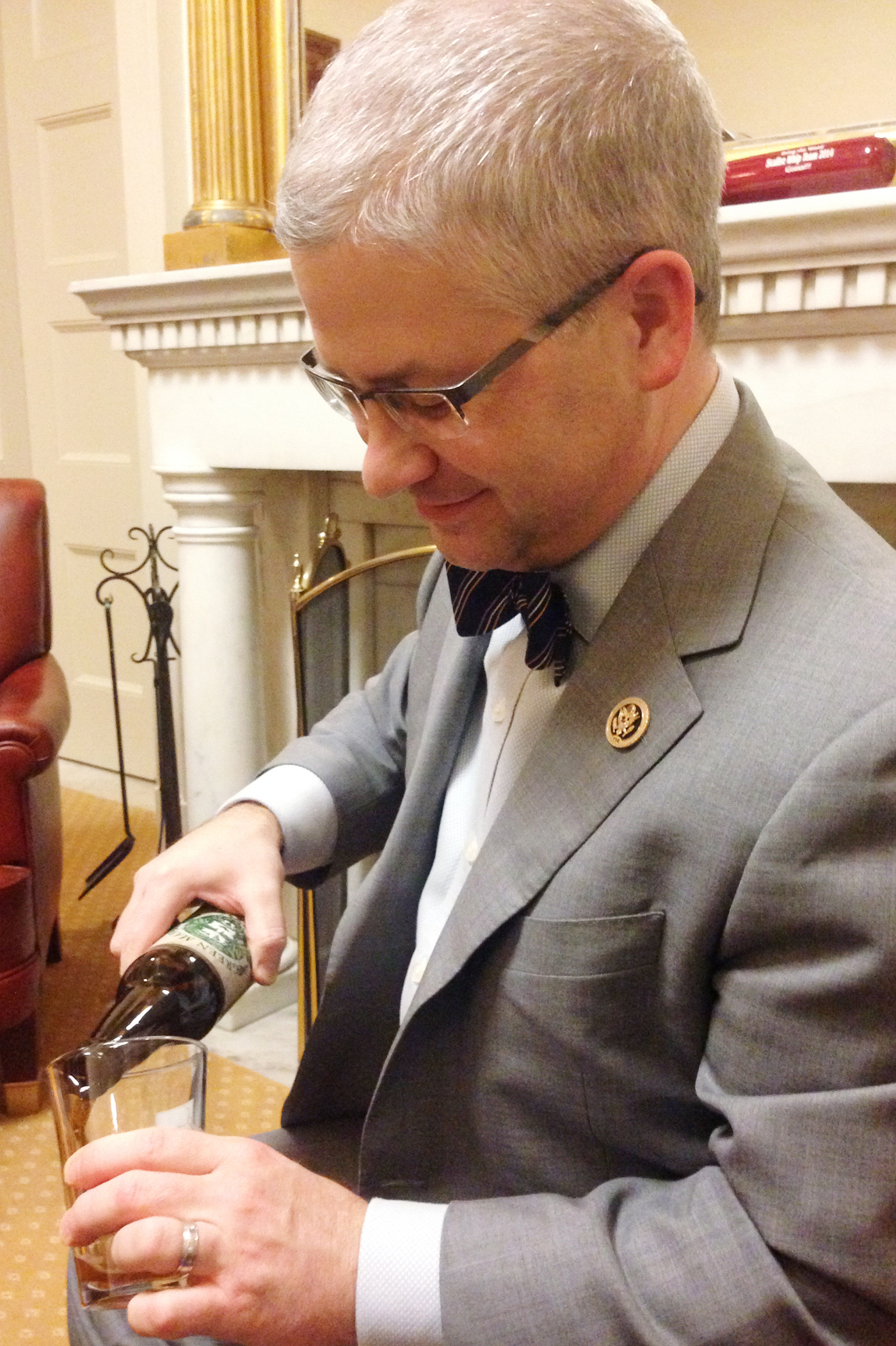 "Brewers in my district are about not only about the sort of art of brewing, they're about jobs," says Rep. Patrick McHenry, seen pouring a beer in his Capitol Hill office.

Last year Right Proper made 1,000 barrels of beer. Under current law, $7 from each barrel went back to Uncle Sam.

"Our margins are so tight that we're not counting dollars, we're counting nickels and dimes," Cheston says. "Any extra amount of money that we can count on in our annual budgets, our monthly budgets is going to go straight back to the business."

But there's another bill in Congress targeting the beer business: the Fair BEER Act. Its backers say it would provide tax relief not just for small brewers, but for all brewers.

This isn't as simple as big beer vs. small beer, says Jim McGreevy who heads up the Beer Institute. His group represents a number of small breweries but is better known for representing beer giants like Anheuser-Busch InBev and MillerCoors. 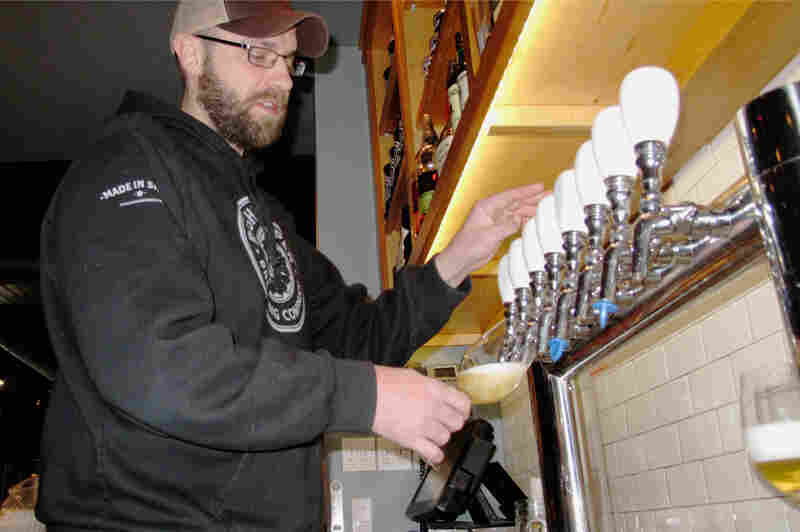 "There's a lot of stress involved. We have 14,000 pounds of stainless steel arriving in two days," Thor Cheston of Right Proper Brewing Company says. "It's a lot of fun though." Nayana Davis/NPR hide caption 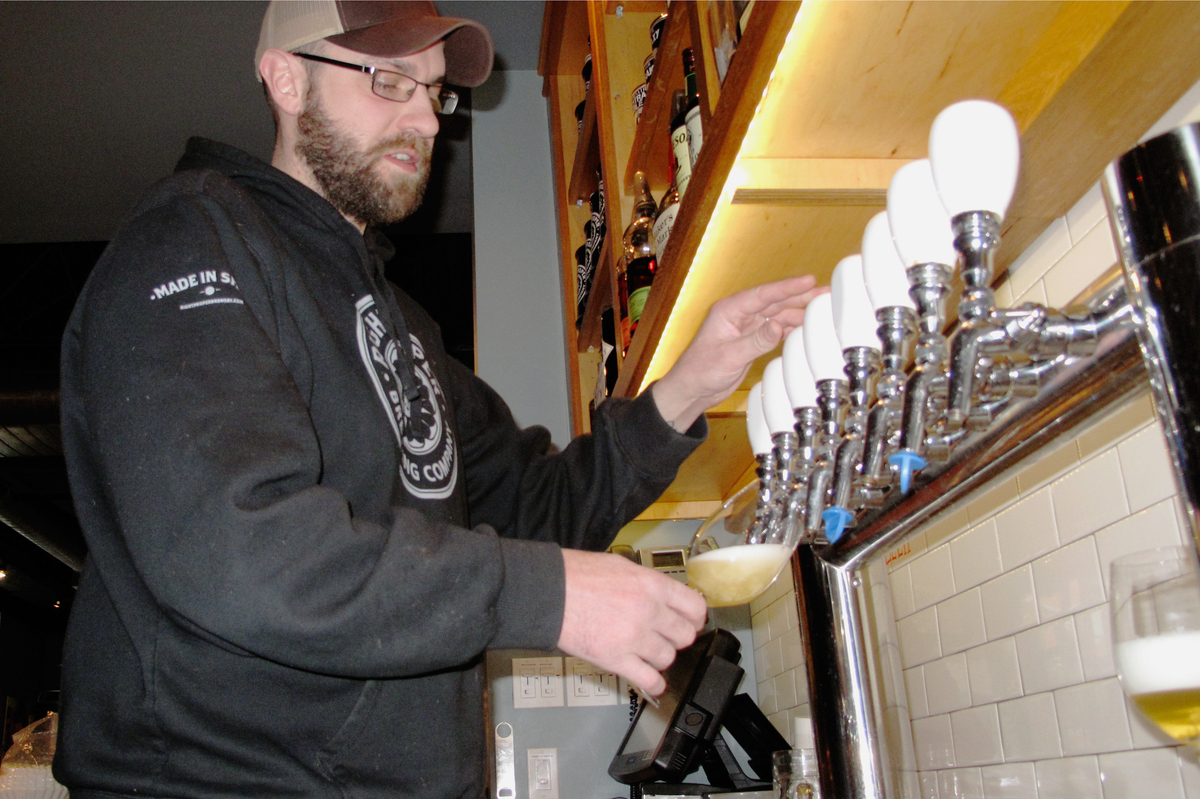 "There's a lot of stress involved. We have 14,000 pounds of stainless steel arriving in two days," Thor Cheston of Right Proper Brewing Company says. "It's a lot of fun though."

"I see this as a way of reforming a tax that's invisible to consumers that potentially hinders new brewers from getting into the marketplace," McGreevy explains at the Beer Institute's Washington offices.

By the Beer Institute's count, the industry is responsible for roughly $246 billion in economic activity.

"We see a very dynamic industry at this moment. We think reform of the beer tax which hasn't been reviewed by legislators in many years would make that even better," he says.

But not everyone is on board with the proposal. Bob Pease, CEO of the Brewers Association, says while there are some things to like about the Fair BEER Act, it's not actually so fair.

"Where we go different ways is that the BEER Act also allows for federal excise tax relief for companies that in some cases are not making any beer in the United States," Pease says during a recent trip to Washington. "The current playing field is not level."

Cardin says big brewers could also see a benefit, though he doesn't agree that they need a tax cut.

"We are aimed at small businesses that need the help in order to grow, that are struggling every day," he says. "By the way, by helping them, we'll be helping the [whole] beer industry because there will be more people interested in drinking beer."

And that's something brewers like Cheston are counting on to keep their brewery doors open and taps pouring.

Cheston compares the way things are now to a documentary he once saw about bull riders.

Whether or not all brewers are in it together, both tax bills face daunting prospects of passing as stand-alone legislation. Advocates on both side of the issue say these proposals have little chance of being considered unless included in broader tax reform legislation.