Accessibility links
The True Tale Of Ireland's Buttery Empire : The Salt From 3,000-year-old peat bogs to 19th-century Brazil to modern foodies, the love of Irish butter has spread far. The secret to Ireland's deliciously rich, creamy butter is in its rolling green hills.

To Eat Authentically Irish This St. Patrick's Day, Go For The Butter

To Eat Authentically Irish This St. Patrick's Day, Go For The Butter 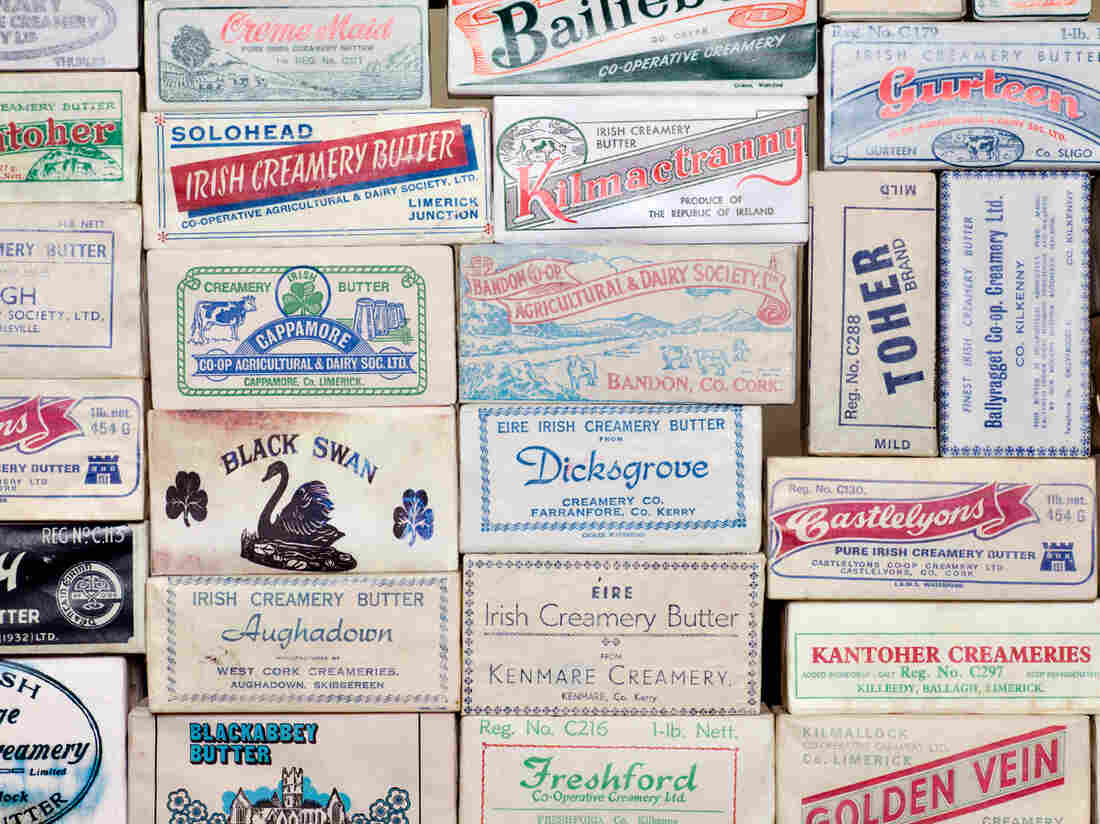 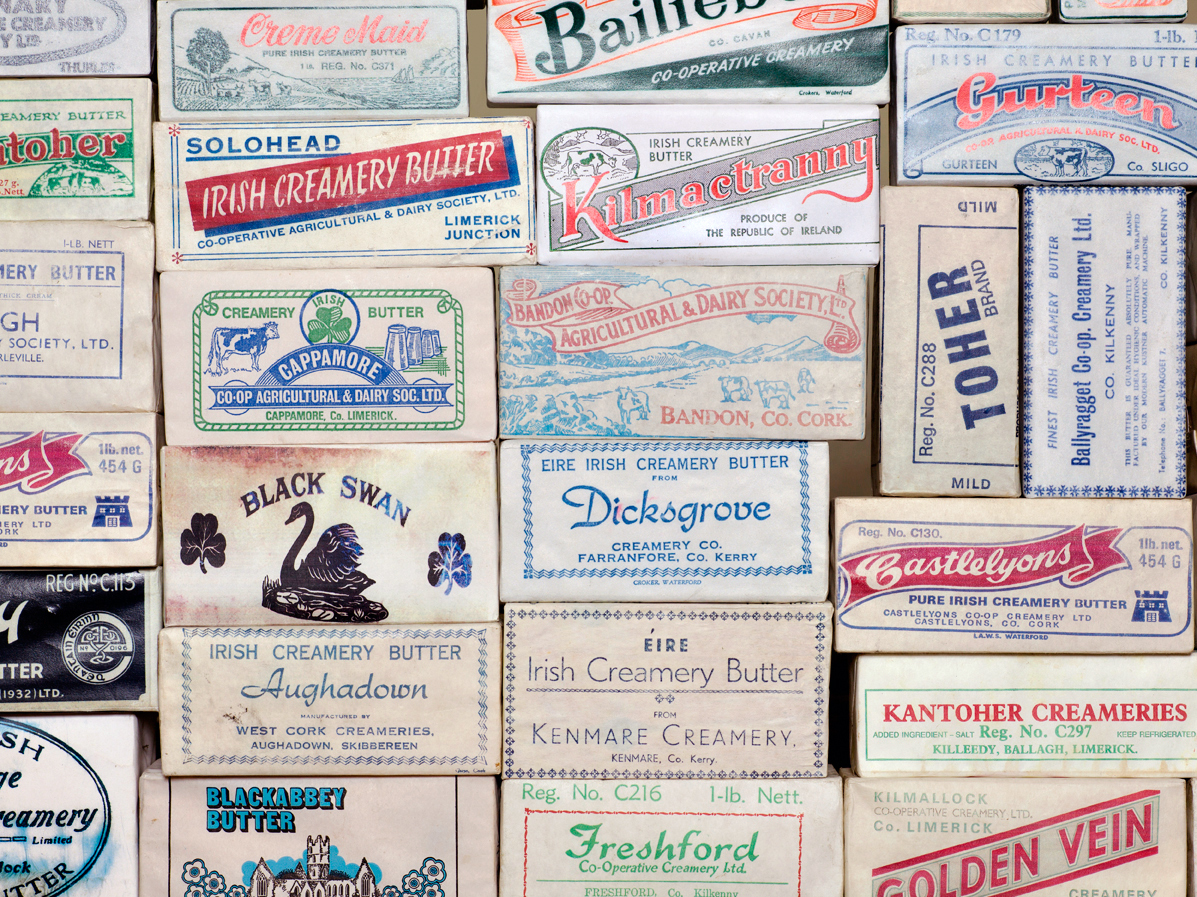 Butter labels from Irish creameries operating in the 1970s.

As scholarly buzzkills have long told us, corned beef isn't really Irish. So what to do if you want a taste of the Emerald Isle on St. Patrick's Day? Instead of green, maybe look for yellow — a pat of Irish butter. Although most Americans are familiar with images of Ireland's rolling green hills, few realize that those hills are the secret to a deliciously buttery empire.

"It goes back to the Emerald Isle," explains Pat O'Keeffe, deputy editor of Irish Farmers Journal. "The green land is our competitive advantage. Those rolling green hills are great for growing grass. You need frequent and regular rainfall, and we've got plenty of that."

The actual Irish cows themselves aren't that different from their American counterparts — in both countries, over 90 percent of milkers are Holstein-Friesians, those iconic black-and-whites. What it comes down to is what the cows are eating.

Irish cows graze on those temperate hills from March to October, and are only milked during those months. (A small number — O'Keeffe estimates 10 percent — are milked year-round for drinking, or fluid, milk, but butter's the real business.) Grass-fed milk produces a rich butter, yellow with natural beta carotene. The polyunsaturated fats in fresh grass also make for pats that are softer than those from hay or grain — all the better for spreading across your scone. Like most European dairy, Irish cream also has a higher butterfat content, creating soft butter with a richer mouthfeel. And the end result? 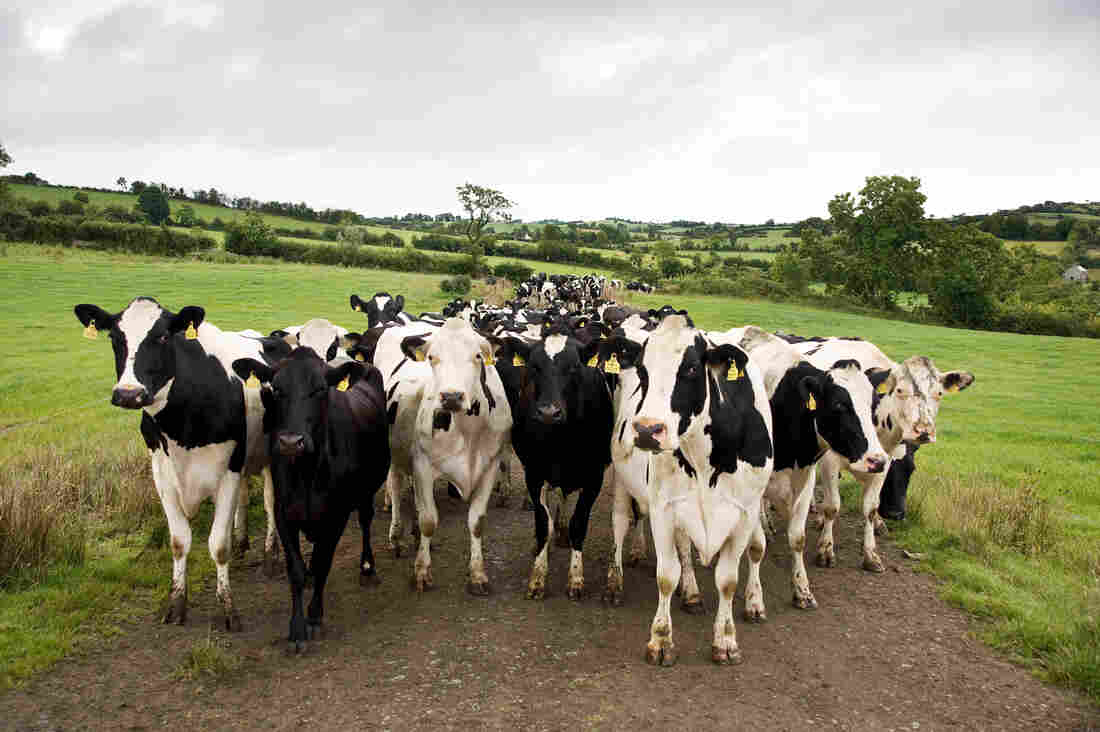 Holstein-Friesian dairy cows make their way towards pasture in County Cavan, Ireland. Irish cows graze on the country's rolling green hills from March to October, and most are only milked during those months. Tom Stoddart/Getty Images hide caption 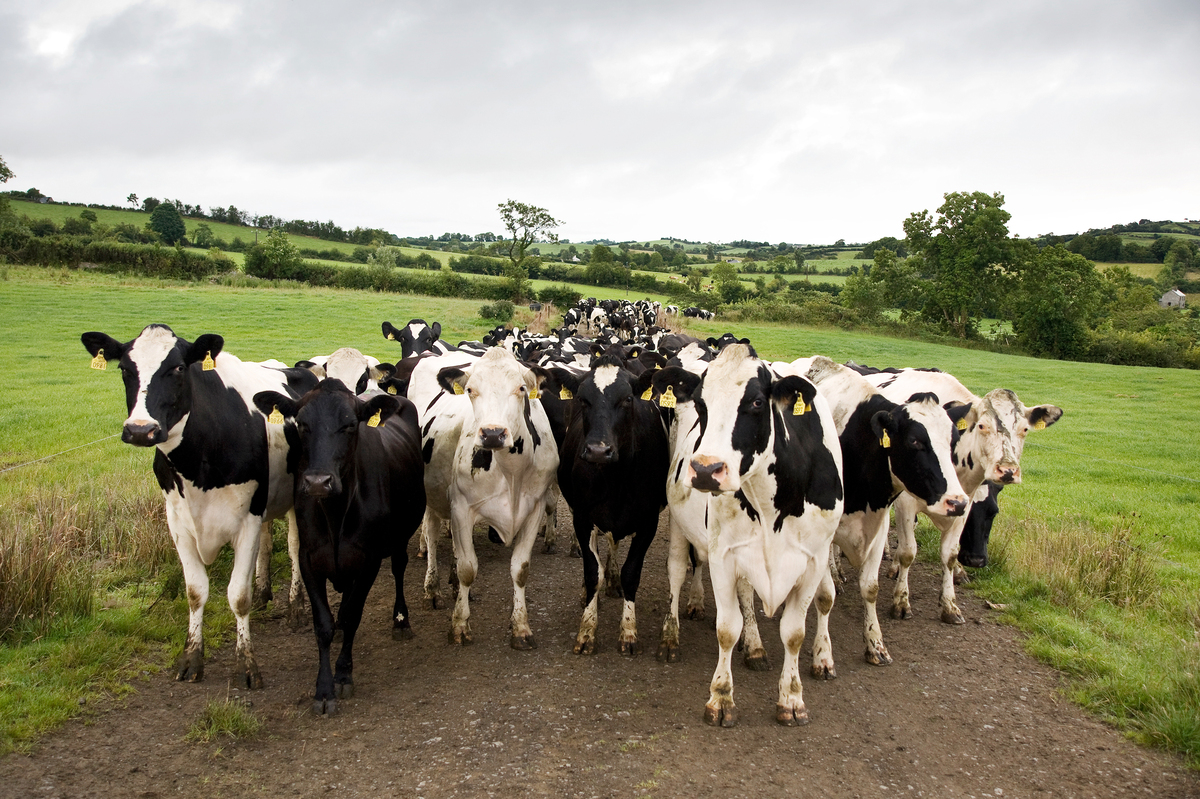 Holstein-Friesian dairy cows make their way towards pasture in County Cavan, Ireland. Irish cows graze on the country's rolling green hills from March to October, and most are only milked during those months.

"I have to be careful for an American audience," Pat O'Keeffe hedges for a diplomatic moment, "but we'd say it's [like the difference between] chalk and cheese."

And those feelings of nostalgia (and unabashed superiority) about Irish butter can run deep, even after leaving Ireland. When Dublin-born Lisa Jacobs' family emigrated to the United States, her parents continued to seek out Irish butter. And when she dropped out of law school to start making cheese in the similarly green-and-rainy Pacific Northwest, her father not-so-gently suggested that Jacobs Creamery make him some good, Irish-style butter. Jacobs even smuggled some grass and wildflower seed to cultivate the cows' fields, seeing if she could capture some of that Irish terroir in her hand-churned product.

But far before this modern evangelism, Irish butter had its fans. Ancient stashes of butter dating back 1,000 years — and up to 3,000 years — are routinely dug out of the Irish peat bogs. Scholars speculate that the butter was either a high-value offering, buried ritualistically, or else a foodstuff stored in the bog as a primitive refrigeration technique. (Either way, the phenomenon is given the irresistible term "bog butter.") Although this millennia-old butter isn't quite ready for toast, butter is a long-lived product. Which means it can be shipped — and it was. 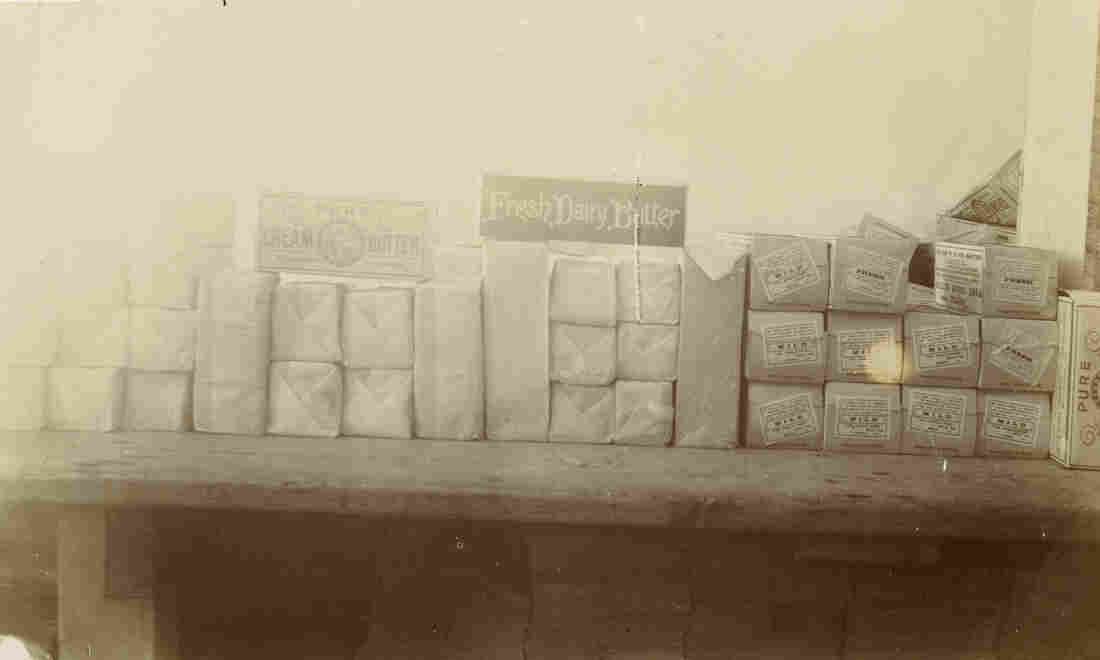 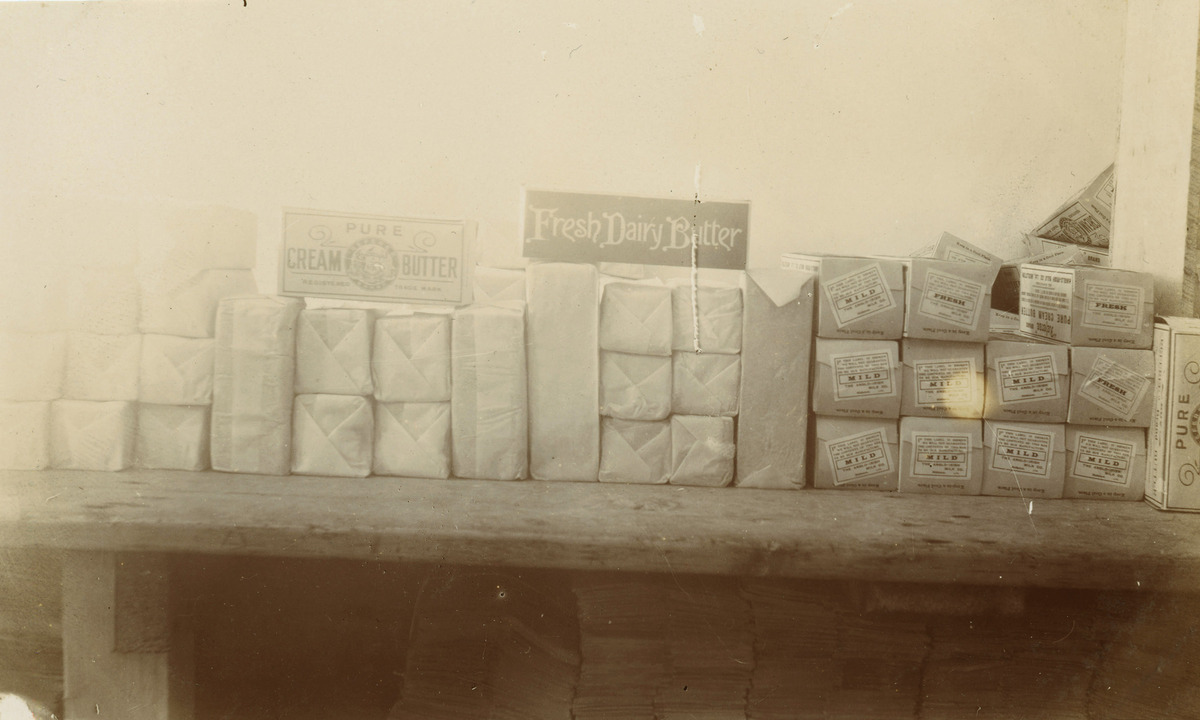 Butter samples from the first quarter of the 20th Century in Ireland.

"Cork butter was the first global food brand," explains Peter Foynes, director of the Cork Butter Museum (and yes, there is a butter museum).

The Cork Butter Exchange was established in the late 18th century, and in its day it was the largest butter market in the world. Irish butter was tied to British expansion, as buckets made their way onto ships loaded for the sugar routes, or crossed the Atlantic to feed troops fighting to quell the American Revolution. Hundreds of thousands of casks left Ireland every year, heading everywhere from Australia to Brazil, France to the West Indies. Miles of "butter roads" helped even remote rural farmers bring their butter into the global marketplace.

But after this peak — Foynes puts it in the 1870s — Irish butter production began to trail off, due to a number of factors. Colonies had steadily been establishing their own agriculture, rendering Irish exports less important. But the biggest blow came in 1879, with the mechanical separator. 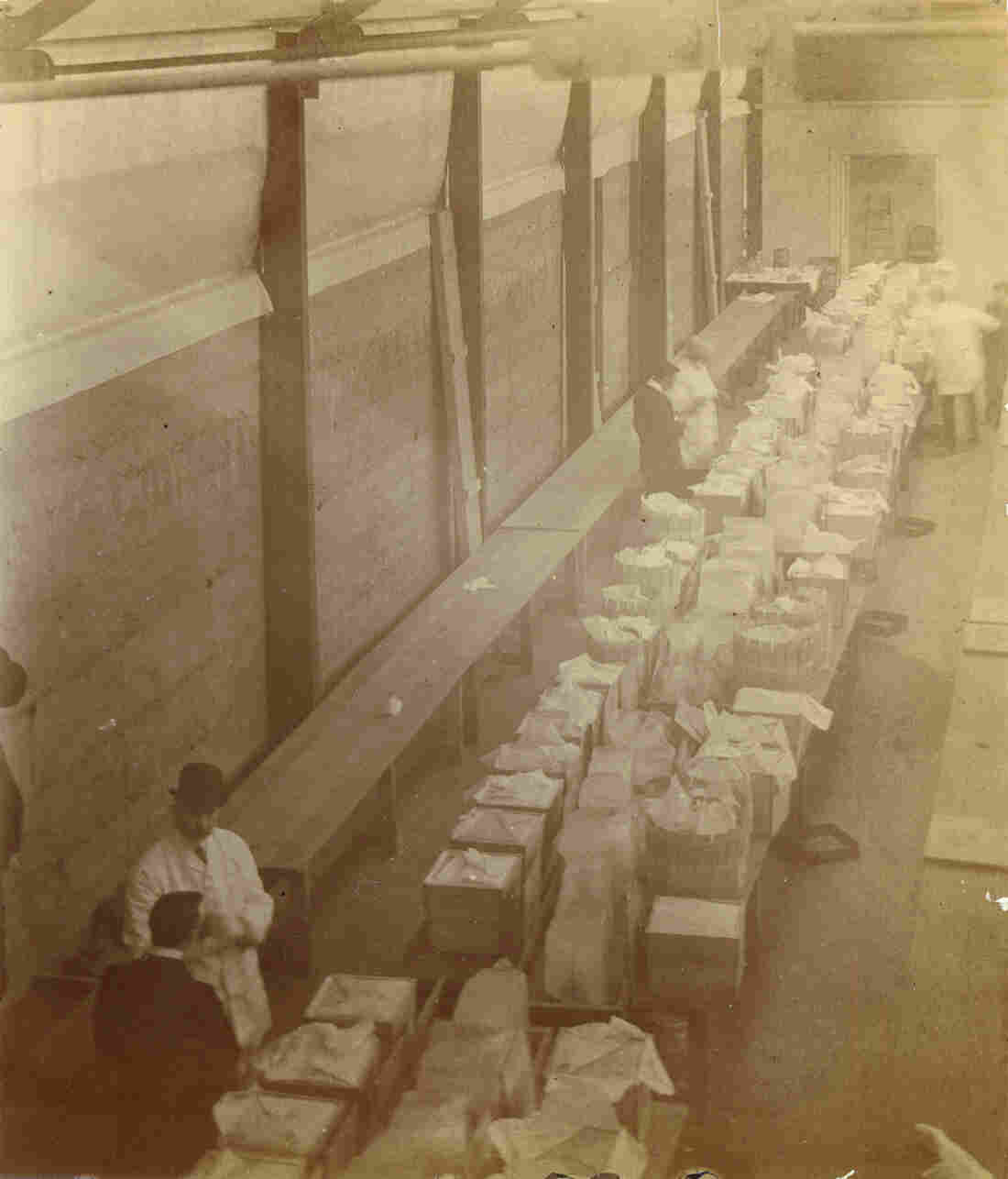 Butter is inspected inside a creamery in Dublin, Ireland, during the first quarter of the 20th century. Cork Butter Museum hide caption 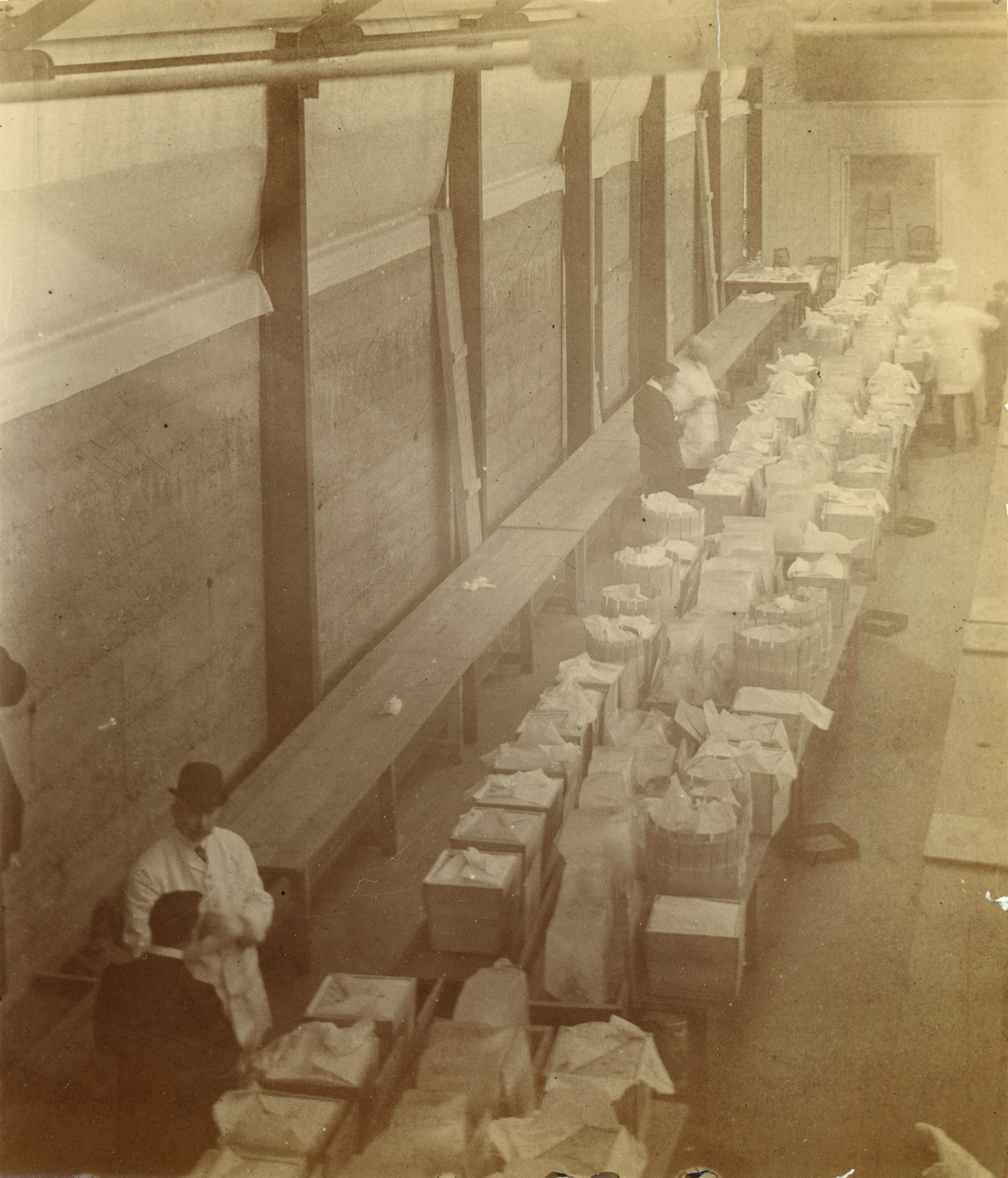 Butter is inspected inside a creamery in Dublin, Ireland, during the first quarter of the 20th century.

Even as farmers mechanized the butter-churning process, they had long been hampered by separating — patiently waiting for the to-be-churned cream to rise to the top (a process that takes 24 to 36 hours, depending upon the temperature). With the centrifuge-like mechanical separator, that wait time is eliminated. Unfortunately, Irish farmers were late adopters; by the time they mechanized, the industry was 20 years behind. By the early 20th century, the Cork Butter Market had closed.

But luckily for lovers of good Irish butter, its grass-fed richness has made a comeback. Farms banded together to form the Irish Dairy Board in 1961, which developed the popular Kerrygold Irish butter. (The company says it's now the No. 4 butter in the U.S.) And the country's EU membership in the following decades brought with it milk subsidies, laying the bedrock for increased dairy production (and even overproduction, leading to established quotas). Later fears of saturated fats hit the Irish butter industry, as they did all dairy, but recent data seems to be moving consumers beyond those margarine moments, and back to the full, sunny swipe of butter.

"Some of the science — or alleged science — has changed," notes O'Keeffe. But like a good Irishman, he was never swayed. "It was always a good product. Butter today is still as good as it was."

And with the 30-year-old EU dairy quotas set to expire on April 1, this product could be on the brink of a new buttery era.