Accessibility links
Nothing Can Kelp Us Now. Meet The New Kale : The Salt With a little help, scientists say that seaweed growing along the Maine and New Hampshire coasts could become the "kale of the sea." The first step is teaching chefs and consumers how to enjoy it. 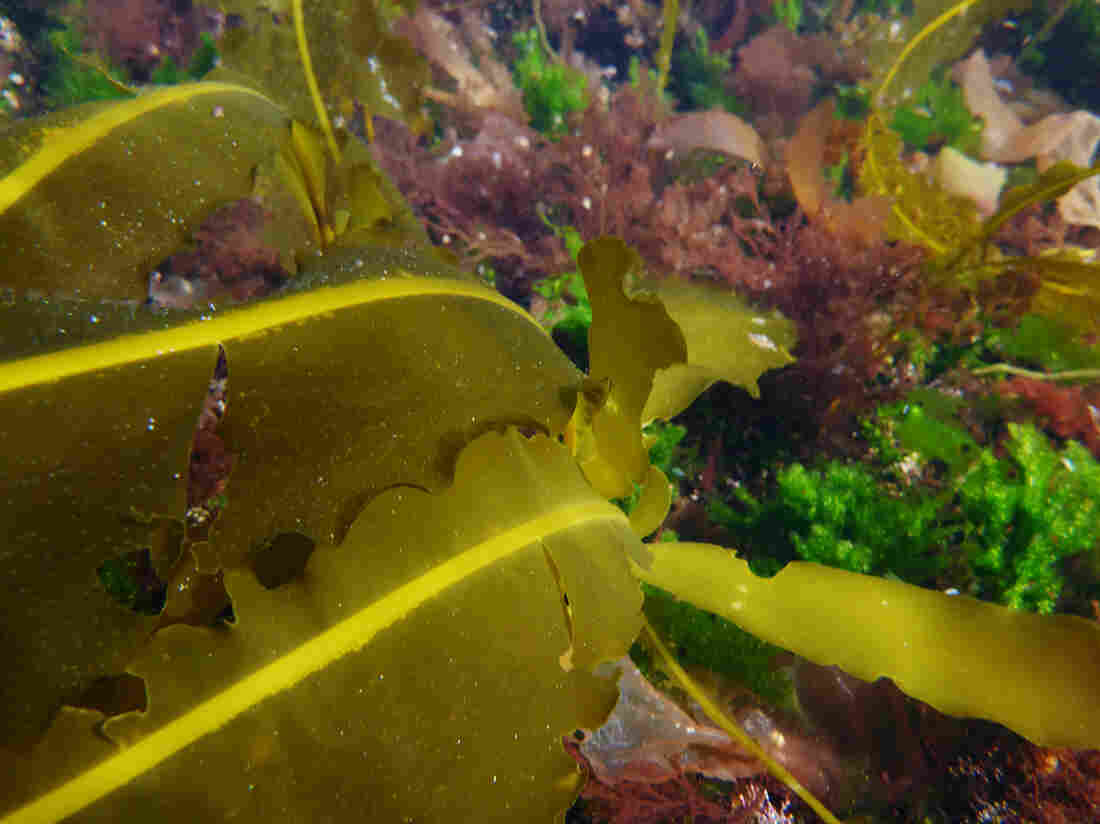 Alaria, a type of seaweed also known as "Wild Atlantic Wakame," grows in the North Atlantic Ocean and is similar to Japanese wakame, a common ingredient in miso soup. Courtesy of Sarah Redmond hide caption 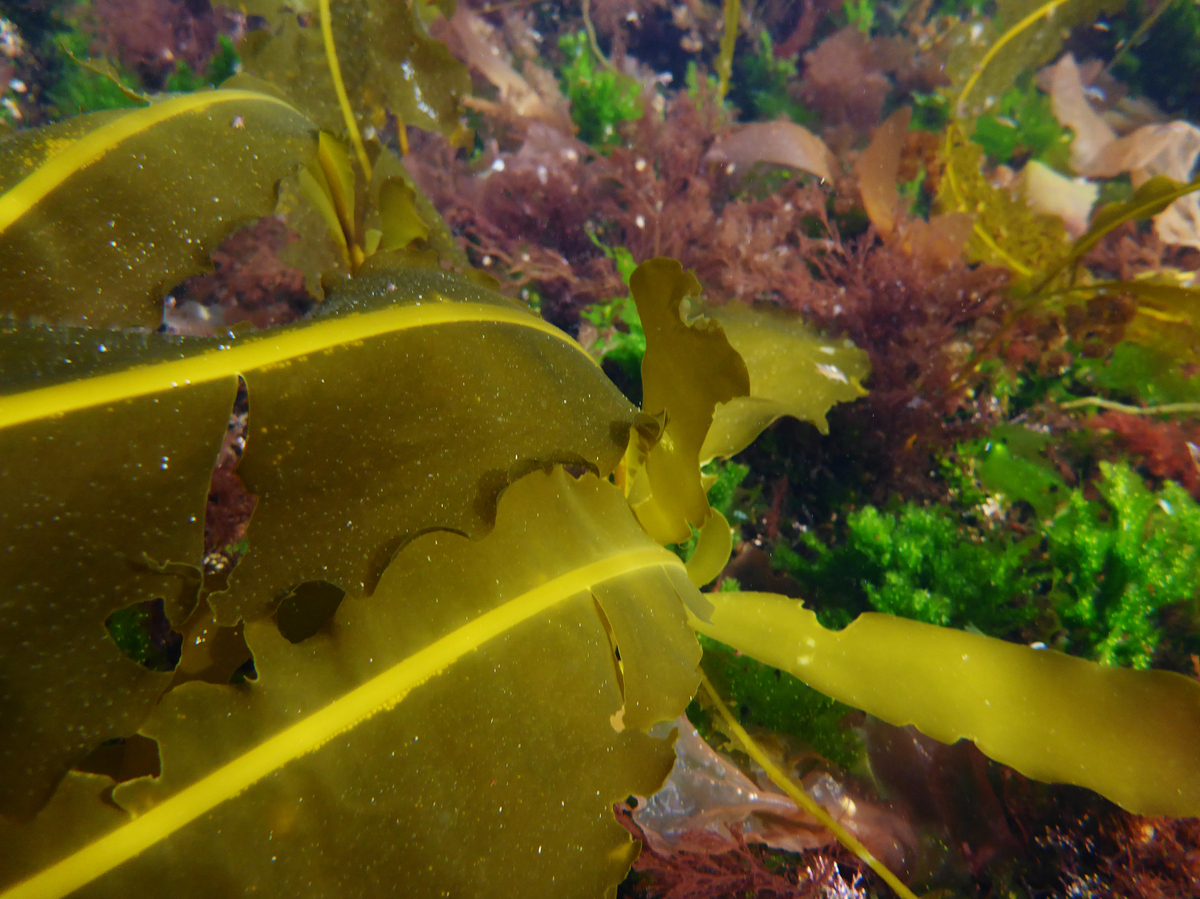 Alaria, a type of seaweed also known as "Wild Atlantic Wakame," grows in the North Atlantic Ocean and is similar to Japanese wakame, a common ingredient in miso soup.

The story of how kale went from frumpy to trendy is a great inspiration to Gabriela Bradt, a fisheries specialist at the University of New Hampshire in Durham.

"Nobody cared about kale. Then it became the green du jour," says Bradt.

With a little help, Bradt says seaweeds like Knotted Wrack and Horsetail Kelp that grow along the Maine and New Hampshire coasts could make the same ascension, and earn a regular spot on restaurant menus and dinner tables.

While we may know seaweed as a wrap for sushi rice and raw fish, Bradt says it's underutilized (and under-appreciated) by Americans. "Macroalgae" can shine in soups, smoothies, hummus, snacks, even desserts.

Asian cultures have long recognized the umami superpowers of seaweed. For centuries Japanese cooks have added nori, kombu and wakame to their seaweed stocks called dashi. These sea plants are rich in glutamic acid, which is related to the flavor-enhancer MSG.

Sea-faring people in Eastern and Northern Europe have also used seaweed in their kitchens. Same goes for Nordic countries, including Iceland.

The American varieties of kelp and other seaweeds, though, are thought to be milder in flavor than ones found in Asian waters. But they contain the same "nutritional smorgasbord" of other sea plants — they're packed with vitamins and minerals including iodine, calcium, magnesium and vitamin B12.

To demonstrate how easy it is to eat kelp, Bradt offers to make me a smoothie.

She tosses the usual suspects into a blender – fruit juice, spinach, berries – then adds some re-hydrated Atlantic kelp from the coast of Maine. (Kelp is typically dried before it's sold, so it has to be softened by simmering it in water for 10 to 15 minutes.) 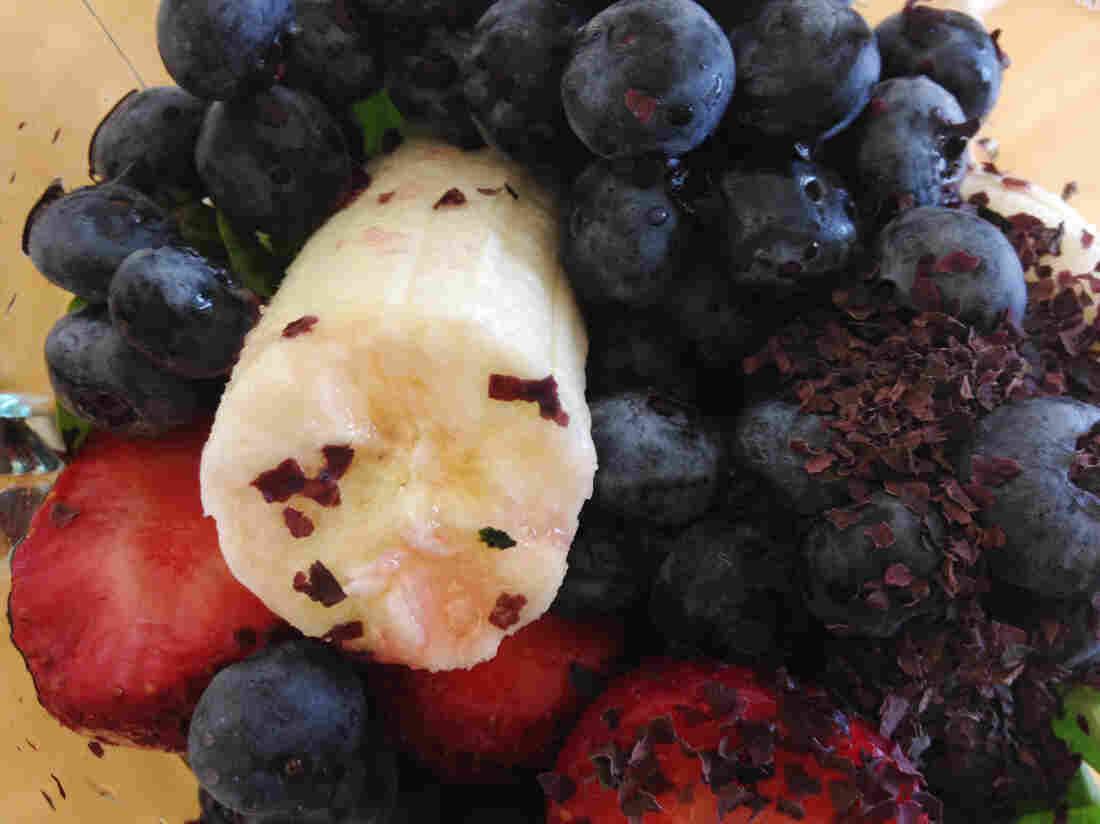 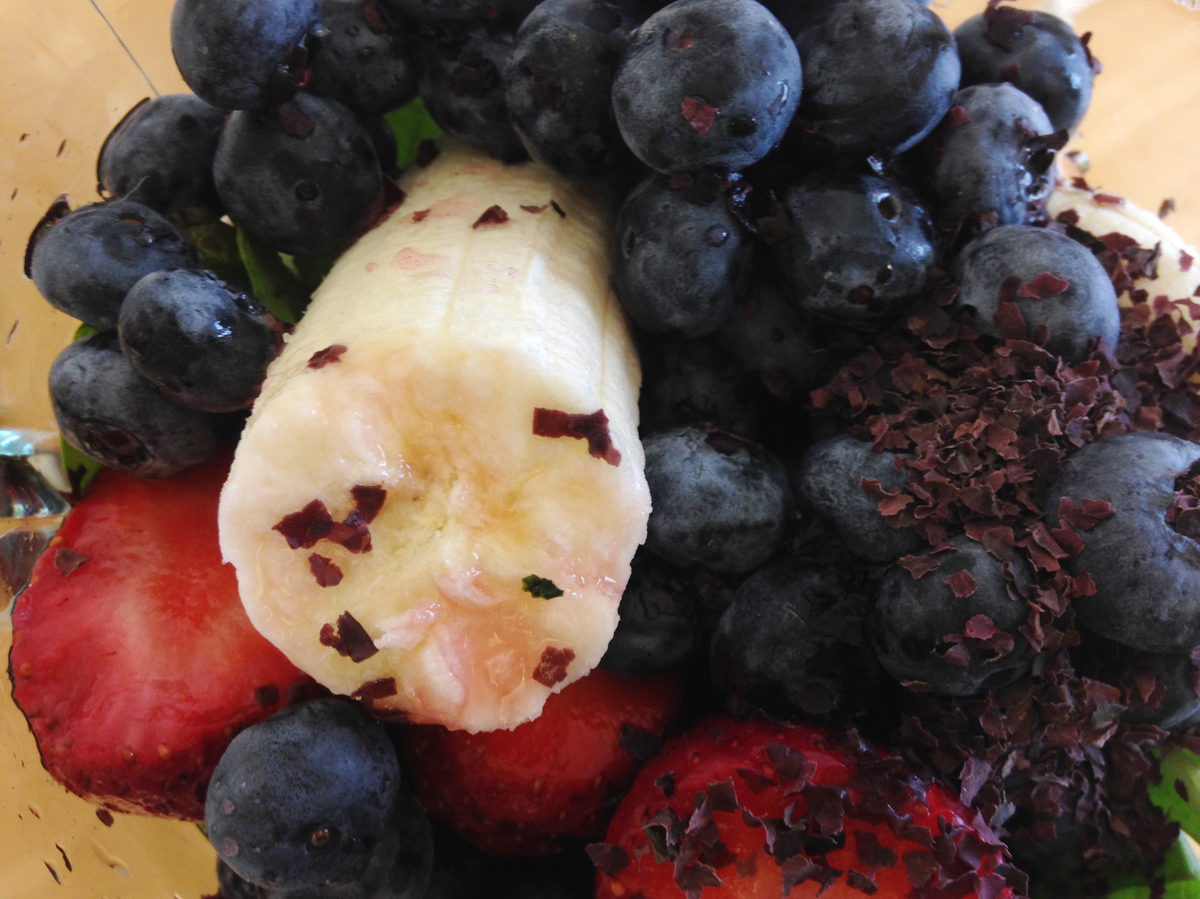 Crimson-colored dulse flakes are added to fresh fruit, veggies and juice to make seaweed smoothies that pack a nutritional punch.

The drink's flavor is milder than I expected, with a hint of saltiness. "I think if you have kids who like smoothies you could hide this stuff so easily," Bradt proposes. "It's not overpowering."

For smoothie no. 2, Bradt uses the flakes of another crimson-colored sea vegetable called dulse. For the uninitiated, the first whiff of dulse – which smells a bit of low-tide decay – can be a bit off-putting.

But it transforms the puree into something as if touched by Poseidon's hand.

This smoothie has some marshiness, which adds a more primal depth to the perky, bright summer fruit. The texture is another matter, and could benefit from run through a high-powered Vitamix, or a pass through a strainer. That, however, would remove the added nutrients in the small chunks of seaweed.

Bradt's quest to transform seaweed into the "kale of the sea" will also require it to make the leap from simple to haute cuisine.

Early this year, Bradt collaborated with Evan Hennessey, an adventurous locavore chef at Stages restaurant in nearby Dover, N.H., to teach people how to incorporate local sea vegetables into their cooking. 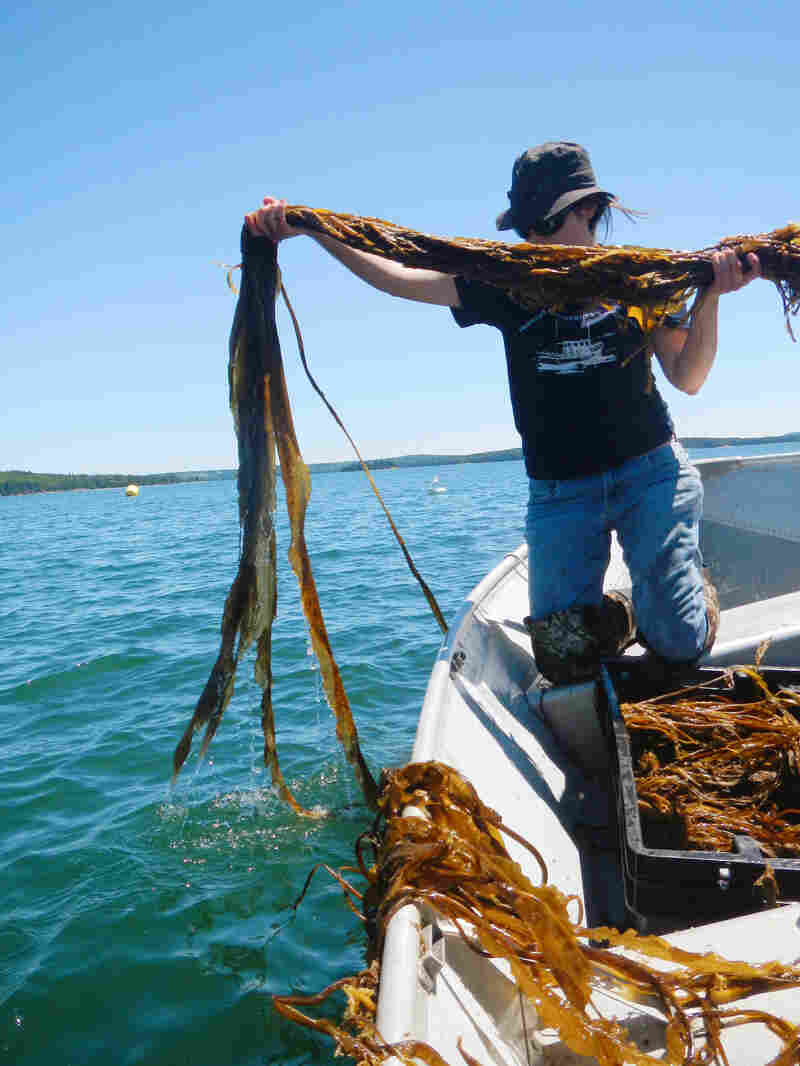 Seaweed expert Sarah Redmond works with farmers off the coast of Maine to expand their industry. Courtesy of Sarah Redmond hide caption 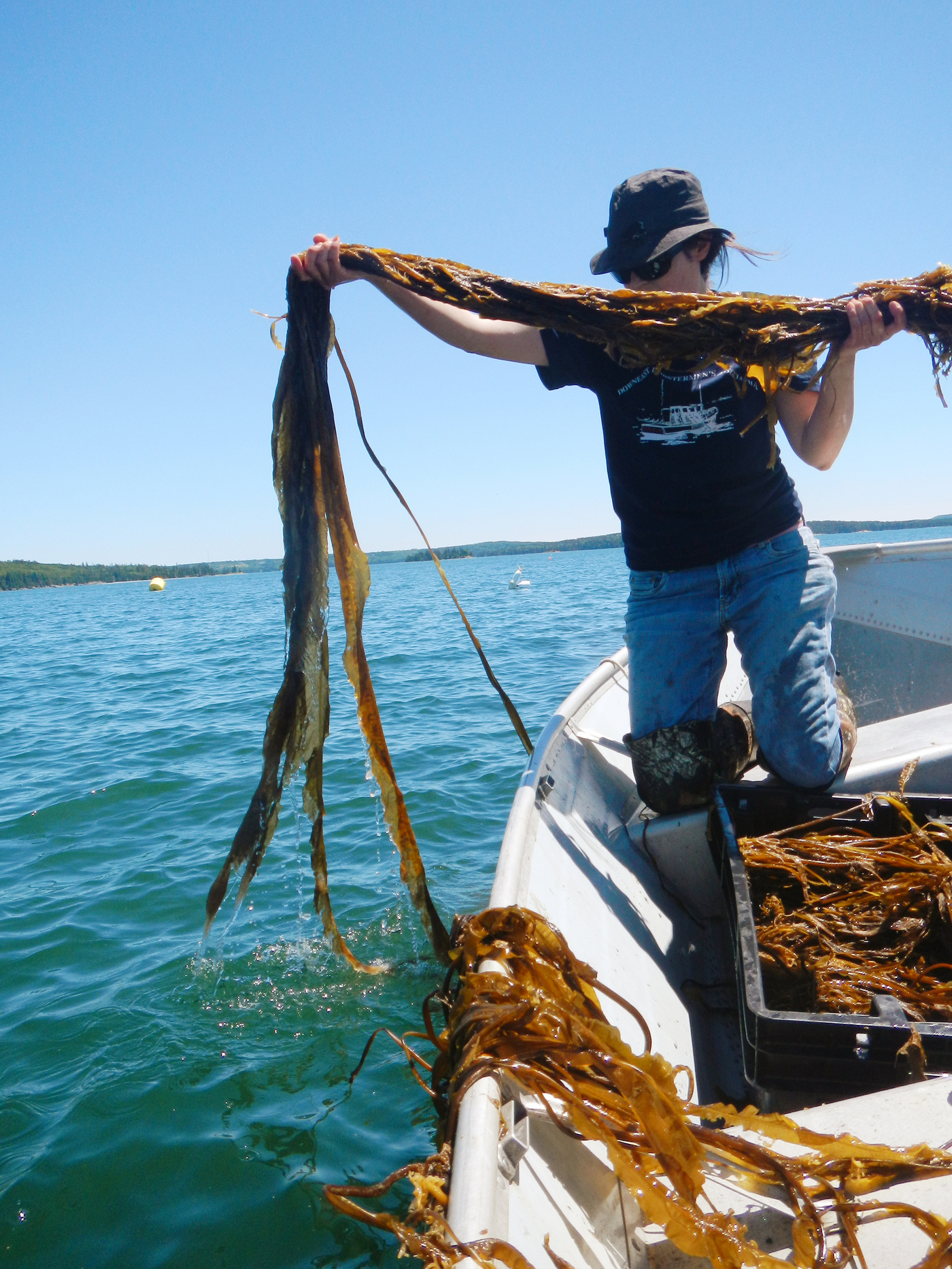 Seaweed expert Sarah Redmond works with farmers off the coast of Maine to expand their industry.

Hennessey prepared an Irish moss pudding, which he describes as a vanilla custard thickened with the common, reddish seaweed (also known as carrageen, or Irish moss) rather than eggs or flour.

He also made a seaweed-cured pollock that he smoked and served with a dashi broth made with dried kelp, seaweed stock, mushroom stock and smoked water. "The complexity and layers of flavor are tremendous," in this dish, Hennessey says.

Hennessey started using seaweeds after a local forager urged him to try a sampling she brought to his restaurant; he and his team immediately liked the oceanic flavor it added to their recipes.

"We have always liked the idea of bringing food back to its origin — and this was the way for us to do that with seafood," Hennessey says. "Since then, it has become practice to use a seaweed in most of our seafood dishes."

Sarah Redmond — Bradt's other sea vegetable partner — was responsible for introducing her to seaweed at an annual conservation meeting. She maintains a seaweed nursery at the Center for Cooperative Aquaculture Research, or CCAR, in Franklin, Maine, where she's trying to create diversity by growing different varieties. "I think what we're doing is re-discovering seaweed as part of our landscape — and hopefully our diets," says Redmond.

According to CCAR, sea vegetables are a $6 billion market worldwide. And Redmond has been observing something of a perfect storm in favor of Maine's growing seaweed industry — companies like Maine Coast Sea Vegetables and the seaweed farms like Ocean Approved.

"In Maine we've had a harvesting industry for 40 years — but it's always been in this small section of the health food store," she says. "But I think what's happening now is the local food movement and consumers are more open to exploring new ingredients ... we probably wouldn't be eating kale if someone else didn't tell us it's really good for us."

Both Redmond and Bradt hand out recipe cards at their Maine and New Hampshire workshops for dishes like seaweed nut crunch, seaweed hummus, and of course, those seaweed smoothies.

In the spring they'll lead foraging trips for the public, and in August there's the mother of all events: the Maine Seaweed Festival in Portland. 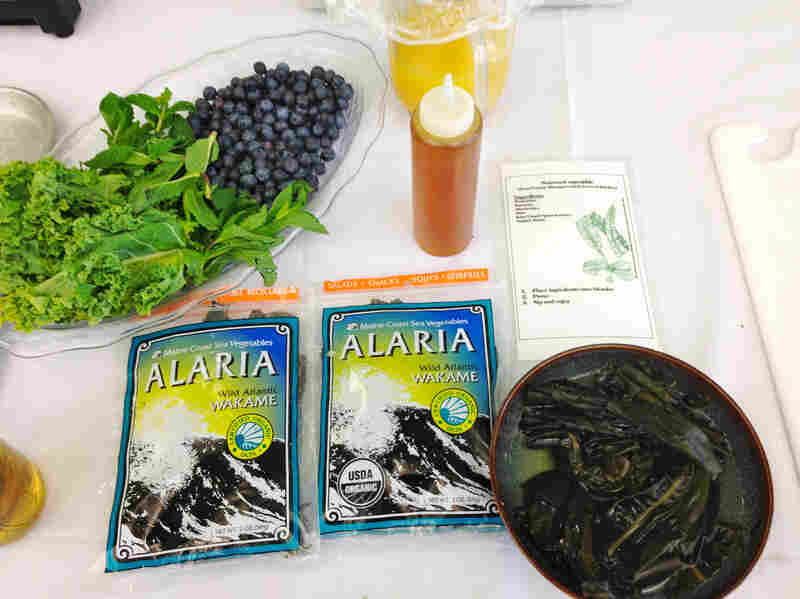 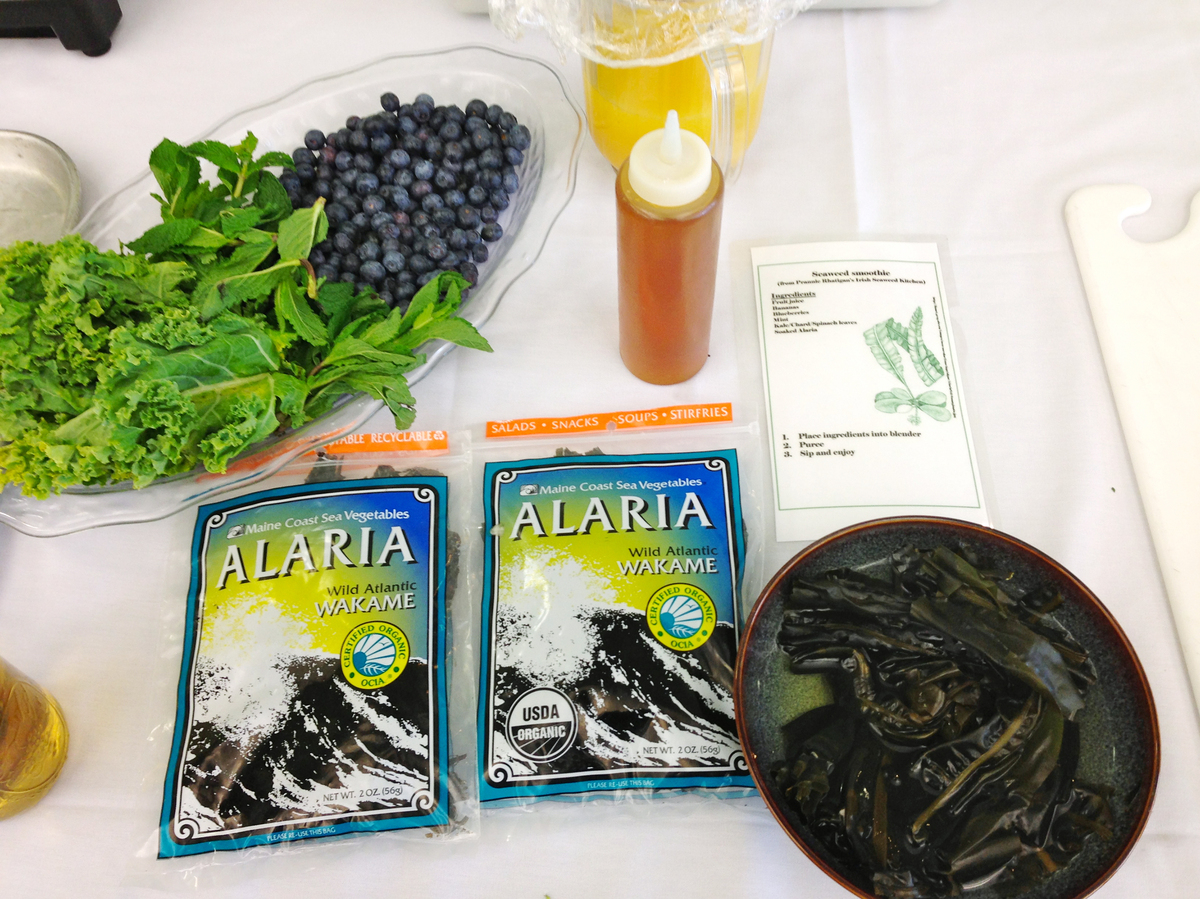 Soak seaweed until tender (for browns, soak overnight, for greens or reds, soak 20 minutes). Rough chop the seaweed and then add it plus soaking water to a blender. Add fruit, greens and other ingredients to taste. Add frozen juice cubs or ice for a frozen smoothie, of frozen for banana for a thicker smoothie.