Accessibility links
Sandwich Monday: Burger King's YUMBO : The Salt For this week's Sandwich Monday, we try the YUMBO. It's a Burger King sandwich with ham and cheese recently pulled out of retirement. 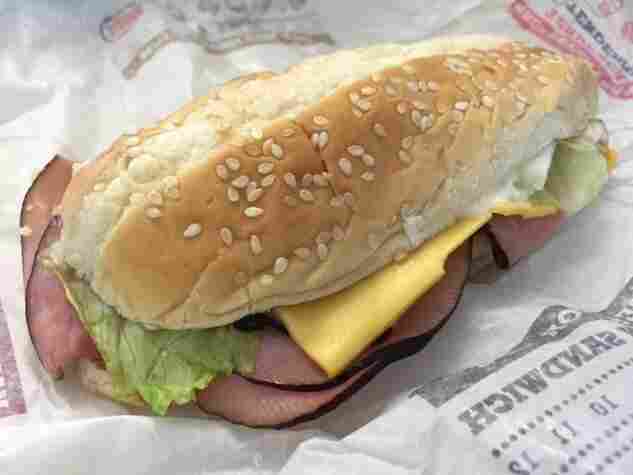 The YUMBO gets its name from Disney's "Yumbo," the heartwarming story of a ham sandwich who could fly. NPR hide caption 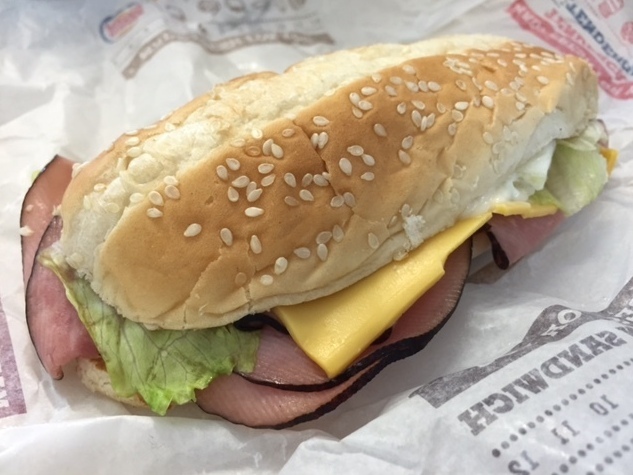 The YUMBO gets its name from Disney's "Yumbo," the heartwarming story of a ham sandwich who could fly.

Nobody is more excited about Burger King's new Chicken Fries — fried chicken strips shaped and served like french fries — than Burger King. The workers at the Chicago store we visited were all dressed in large, sacklike yellow Chicken Fries T-shirts, and a chicken mascot cavorted on the electronic menu, next to a picture of the item.

"Two orders of Chicken Fries!" I said, infected, salmonella-like, with their joy.

"We don't have any Chicken Fries," said the server.

I pointed mutely at the dancing chicken above her head.

"They should show up tomorrow," she said. "We're waiting for the truck."

So instead, I ordered the YUMBO, a ham and cheese sandwich that was on the Burger King menu 40 years ago and recently brought back into service. There were no pictures of dancing pigs, no T-shirts with snouts, yet they were able to make the sandwich. I don't understand this world at all. 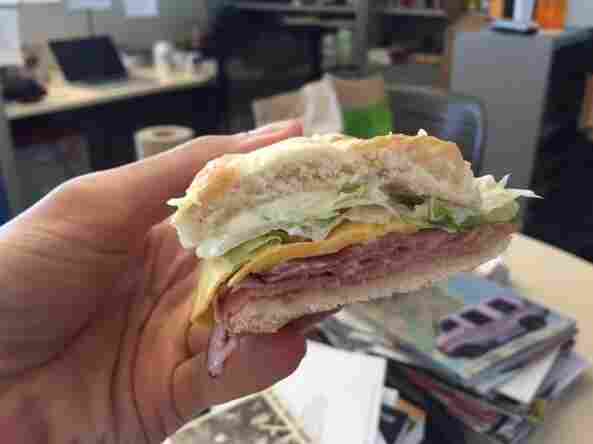 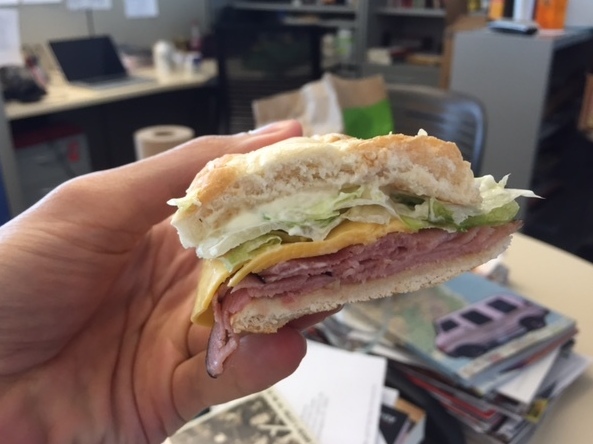 Eva: I don't like how it announced "I'm baaaaaaaaaaa-aack!" when Peter put it on the table.

Ian: I bet it was really enjoying its retirement, sitting by the ham beach, playing ham golf. 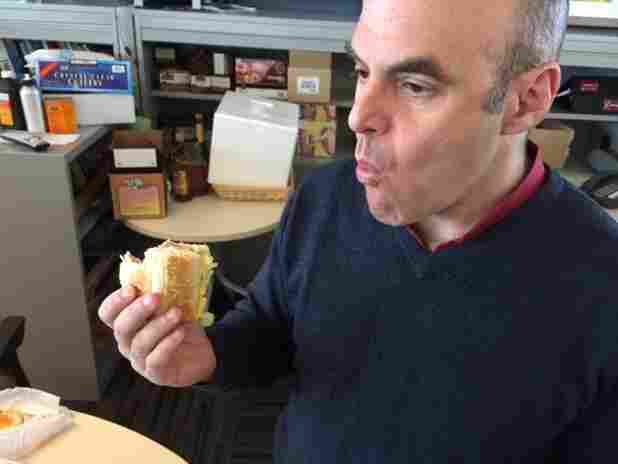 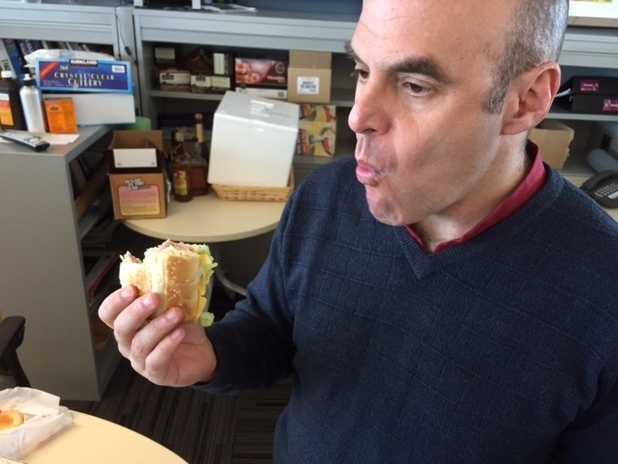 Peter: A judge once said, "A good prosecutor could get a grand jury to indict a ham sandwich." I believe this is the one he was thinking of. 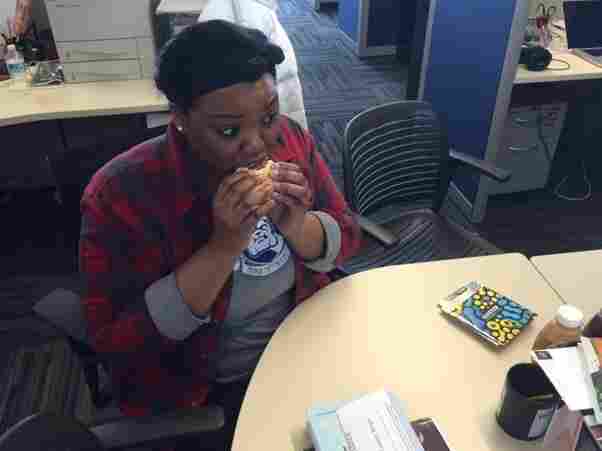 Intern Jeanette was 16 years old when the YUMBO was born. NPR hide caption 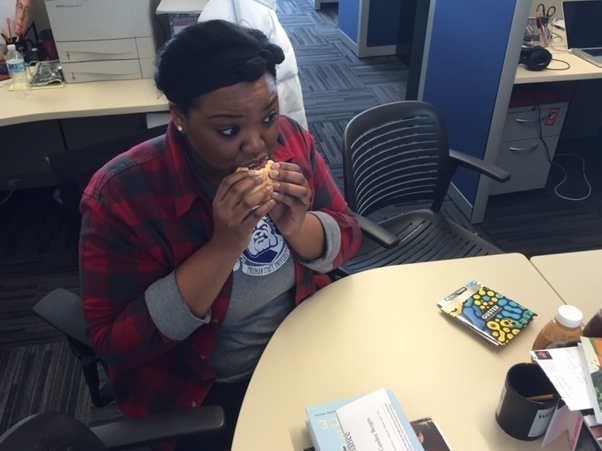 Intern Jeanette was 16 years old when the YUMBO was born.

Peter: This is for people who want to enjoy damp, spongy sandwiches without the expense and trouble of finding an airport kiosk.

Miles: Are we sure we didn't misread the advertising, and that this specific sandwich isn't 40 years old? 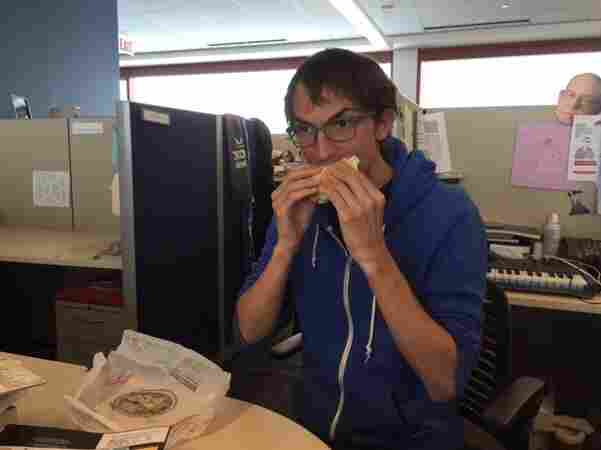 Ian is haunted by the violence in "YUMBO: First Blood." NPR hide caption 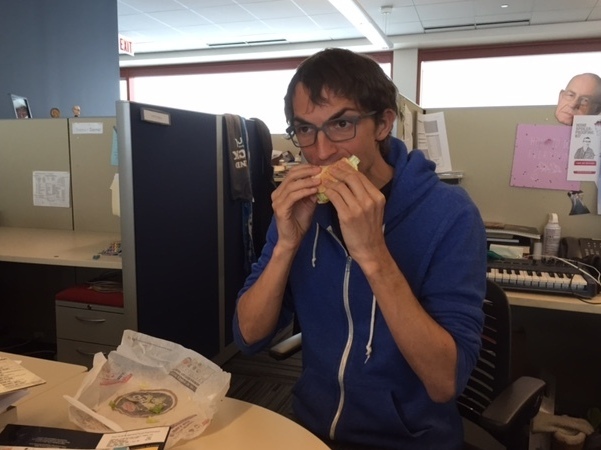 Ian is haunted by the violence in "YUMBO: First Blood."

Miles: I think if your sandwich needs to announce that it's "yumbo," it's trying too hard.

Peter: Forty years ago, I wasn't allowed to eat ham sandwiches. Now, I finally can. This is like a really disappointing Jewish rumspringa.

[The verdict: It's a perfectly good ham sandwich. It maybe doesn't deserve the name YUMBO, but given that the word "yumbo" doesn't actually mean anything, maybe it does. Maybe it does.]