Accessibility links
A Top Weedkiller Could Cause Cancer. Should We Be Scared? : The Salt A respected scientific group says that glyphosate, also known as Roundup, is "probably carcinogenic to humans." Yet the actual risks — which are mainly to farmers, not consumers — remain uncertain. 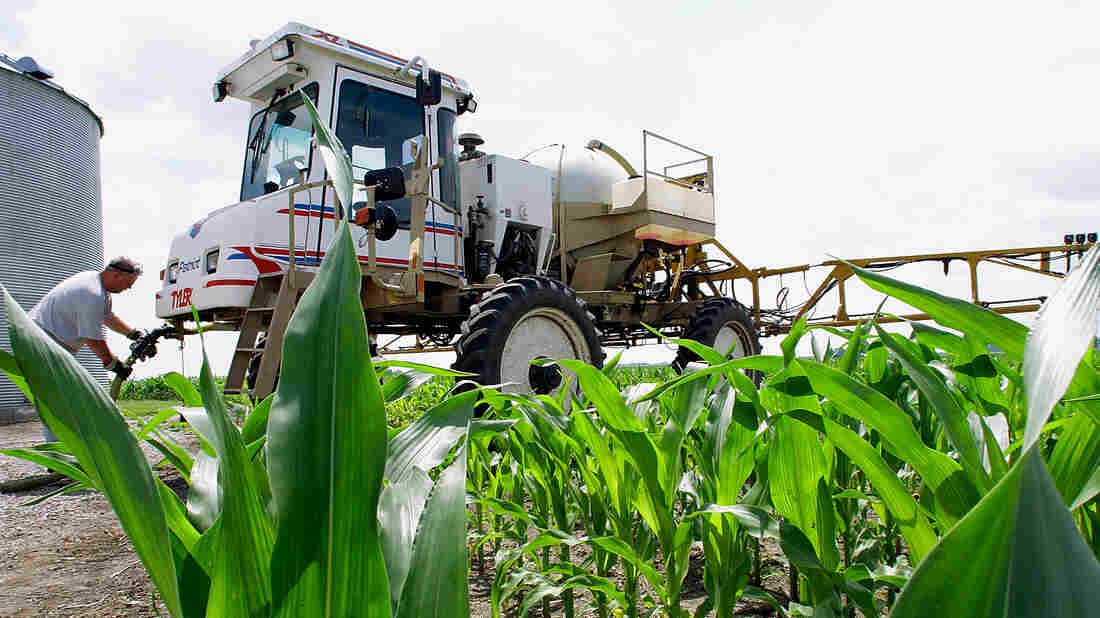 Central Illinois corn farmer Jerry McCulley refills his sprayer with the weedkiller glyphosate on a farm near Auburn, Ill. A new assessment of the chemical finds that the (uncertain) risks mainly affect the people who work with it or who come in direct contact with areas where it's applied. Seth Perlman/AP hide caption 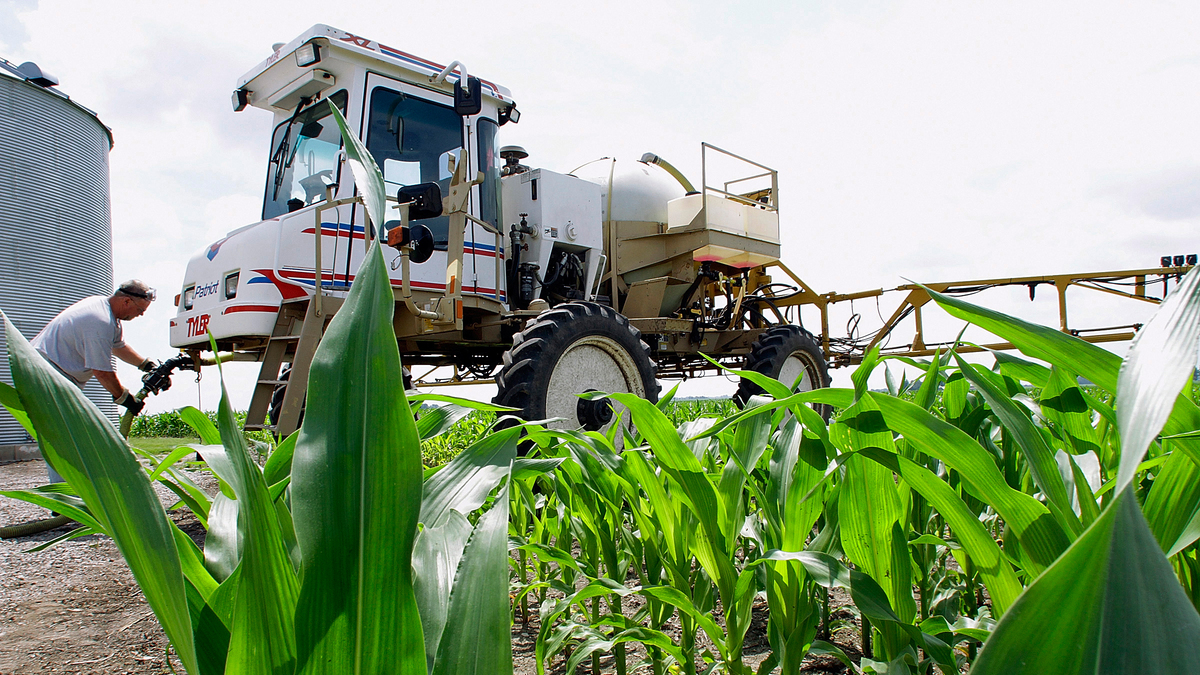 Central Illinois corn farmer Jerry McCulley refills his sprayer with the weedkiller glyphosate on a farm near Auburn, Ill. A new assessment of the chemical finds that the (uncertain) risks mainly affect the people who work with it or who come in direct contact with areas where it's applied.

An international committee of cancer experts shocked the agribusiness world a few days ago when it announced that two widely used pesticides are "probably carcinogenic to humans." The well-respected International Agency for Research on Cancer published a brief explanation of its conclusions in The Lancet and plans to issue a book-length version later this year.

The announcement set off a wave of feverish reaction, because one of these chemicals, glyphosate, is a pillar of large-scale farming. Better known by its trade name, Roundup, glyphosate is the most popular weedkiller in the world.

Farmers like it because many crops, including corn, soybeans and cotton, have been genetically modified to tolerate the chemical. Farmers can spray it across entire fields, killing weeds while their crops survive.

The IARC also classified the insecticide malathion as a probable human carcinogen. Malathion is often used to control mosquitoes. In the 1980s, it was sprayed across parts of California, including entire suburban communities, in an effort to eradicate the Mediterranean fruit fly.

Monsanto, the company that invented both glyphosate and "Roundup Ready" crops, was indignant, calling the IARC's assessment "junk science." Monsanto's chief technology officer, Robb Fraley, said in a statement that "this result was reached by selective 'cherry picking' of data and is a clear example of agenda-driven bias." Fraley pointed out that the IARC assessment did not result from any new scientific data, and that regulatory authorities in many countries have repeatedly evaluated these studies and concluded that glyphosate is safe.

In fact, glyphosate has been widely considered among the safest pesticides. Compared to other agricultural chemicals, it causes little harm to birds, fish and mammals, and it breaks down relatively quickly in the environment.

Opponents of genetic engineering, meanwhile, greeted the announcement as long-awaited vindication of their skepticism regarding GMOs. In a statement, Gary Hirshberg, chairman of the Just Label It campaign, said that "our worst fears are now confirmed," and argued that it confirmed the need for GMO labeling.

In fact, the IARC's assessment leaves many questions unanswered, including how much risk glyphosate poses.

"What the IARC performs is hazard assessment," says Aaron Blair, who chaired the group of scientists that prepared the IARC's assessment of glyphosate. Blair is a scientist emeritus at the National Cancer Institute. Hazard assessment, he explains, is concerned with a simple question: Could a substance cause damage "in some circumstance, at some level of exposure?" How commonly such circumstances or exposures actually occur in the real world, he says, is an entirely different question, and not one that IARC tries to answer.

In other words, the IARC is saying that glyphosate probably could cause cancer in humans, but not that it probably does.

Blair says that two types of evidence convinced the committee that the glyphosate has the potential to cause cancer. First, there were laboratory studies showing that the chemical can damage DNA and chromosomes in human cells. This type of damage can lead to the emergence of cancer. Second, Blair says, some studies showed increased rates of cancerous tumors in mice and rats that were exposed to glyphosate. These were rare forms of cancer that are unlikely to occur by themselves, adding to the evidence that glyphosate caused them.

On the other hand, studies of human health records did not turn up convincing evidence of glyphosate's cancer-causing potential. A long-running study of farm workers, for instance, did not show higher rates of cancer among those exposed to the chemical.

As for the impact of the IARC's assessment, the agency does not have any regulatory authority. The job of calculating the actual danger of glyphosate, taking into account real-world exposure levels, and of regulating its use in the U.S., falls to the Environmental Protection Agency. The EPA is currently reviewing the legal status of a host of pesticides, including glyphosate.

Blair points out that society often chooses simply to accept certain hazards. Among the other things that the IARC says probably cause cancer are burning wood in home fireplaces, disruption of circadian rhythms by working overnight shifts and working as a hairdresser.

The glyphosate assessment "will be controversial" even among scientists, says David Eastmond, a professor at the University of California, Riverside, and a specialist on the risks posed by agricultural chemicals. "It's conceivable that another group of experts might come to a different conclusion."

Both Eastmond and Jane Hoppin, an environmental epidemiologist at North Carolina State University, say that they'll be interested in perusing the IARC committee's full report on glyphosate and the other four pesticides that it evaluated. That report, which runs some 400 pages, will be published later.

Hoppin says the IARC report should remind people that "they should be careful and thoughtful about how they use these chemicals," because some of their biological effects remain uncertain. The risks, whatever they may be, mainly affect the people who work with them or who come in direct contact with areas where they are applied. This includes farmers, gardeners or children who play on lawns where pesticides were used.

Glyphosate residues on food, however, are not of great concern. The chemical is typically used in the early stages of growing crops like soybeans, corn, and canola. Those crops, if they even reach human consumers at all, are heavily processed first, destroying any glyphosate residues.